Respectful renovation with a story to tell

What happens when a real-life Mad Men ad man jumps the rat wheel, takes up home restoration, moves to Nantucket, reconnects with an architect friend at his daughter’s wedding — and marries her?

The obvious answer: They move to Southern Pines, buy a moldering cottage built in 1910, rip it apart and put it back together (she designs, he hammers) to resemble a period residence with tiny rooms, dark woods, deep green/barn-red/aubergine walls swallowed up by paintings, prints, memorabilia and collections. Modernity is limited to recessed lighting, radiant heat in the sunroom floor, Wi-Fi and AC. However, being practical, Scott and Francy Samuel rearranged space and added a sunken living room which, given its beams, wood-burning fireplace and antique furnishings (recliners notwithstanding) melts into the theme.

In contrast, a rear deck overlooks an acre of putting green grass bordered by 30-foot crape myrtles. Beyond that, a 20-by-40-foot pool. The contrast between recreated old and glamorous new . . . shocking, thrilling. 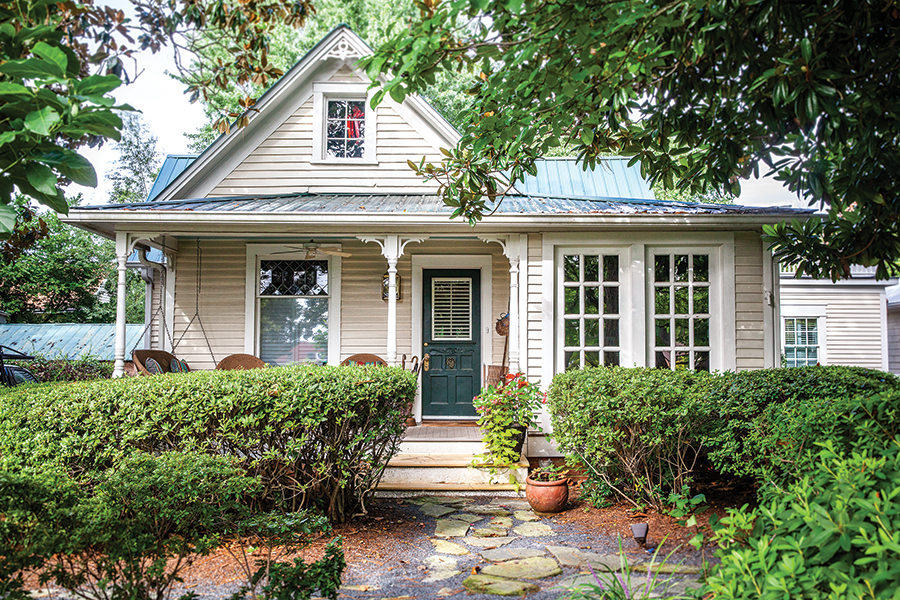 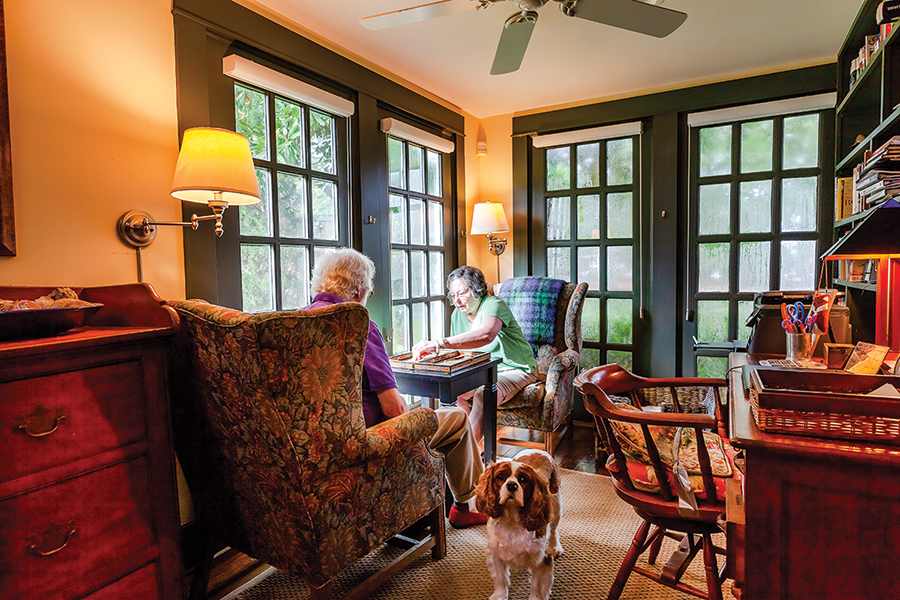 If ever a cottage required a docent — a catalog, at least — it is Cosmo, named for cosmopolitans, the Samuels’ favorite cocktail.

Francy, Scott and two Cavalier King Charles spaniels settle into chairs in the living room addition to relate their journey.

In the 1960s Scott pursued a career with top-drawer Madison Avenue ad agencies: expense accounts, martini lunches, other trappings of the trade as portrayed on Mad Men. He lived in a 20-room Tudor in Bronxville, a fashionable Manhattan suburb, and produced commercials for Mercedes, Nationwide and Maxwell House. Francy, who studied architecture after raising a family, designed high-end housing and residential projects for battered women, other special needs clients, in Boston. For each, the fast lane got too fast: “You get so embroiled in meetings, city permits,” Francy says. “I was relieved to come down here.” Scott: “Things started to change (in the ad world). Computers took over. Clients were merging. You could hear young footsteps closing in. The fun was gone.”

Scott discovered Southern Pines in the late 1990s, when he came down to help a friend convert a Knollwood mansion into a B&B. During a subsequent New England winter, Scott asked himself, “What am I doing here?” Francy had never been to North Carolina. “I expected to see lots of Taras.” Scott brought her down in June; they stayed at the renovated B&B. Late spring flowers bloomed everywhere. “People were so friendly,” she remembers. Taras were scarce, thank goodness.

They bought the cottage on Vermont Avenue in September 2001. After 9/11 small-town life seemed even more attractive. New construction wasn’t an option. Too many old houses in need of rescue, they decided.

Except this one was, Scott recalls, overrun with critters and falling apart; when a train roared by plaster fell off the walls. Architect Francy recognized good bones. “The house sat well on the property,” Scott noticed. Their hands-on reclamation took about a year. 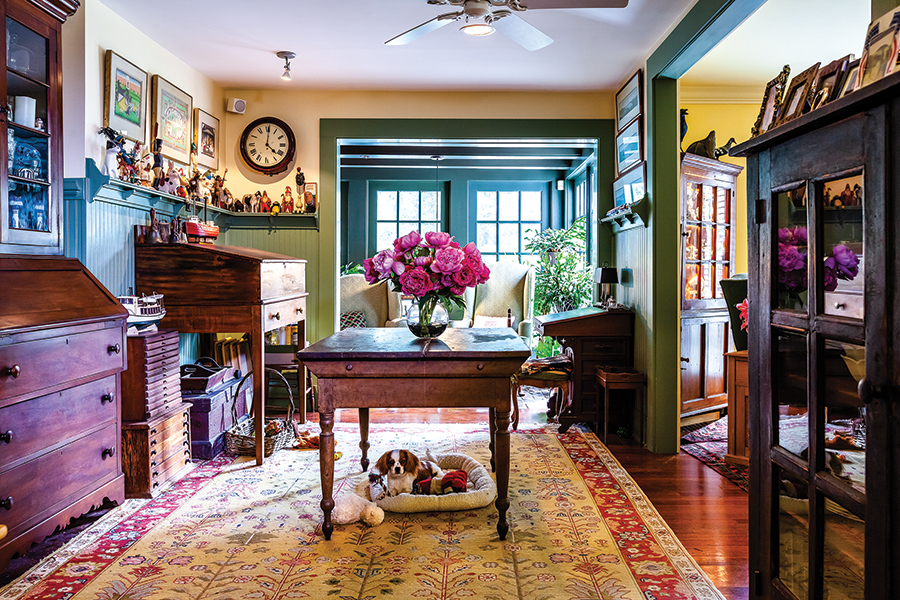 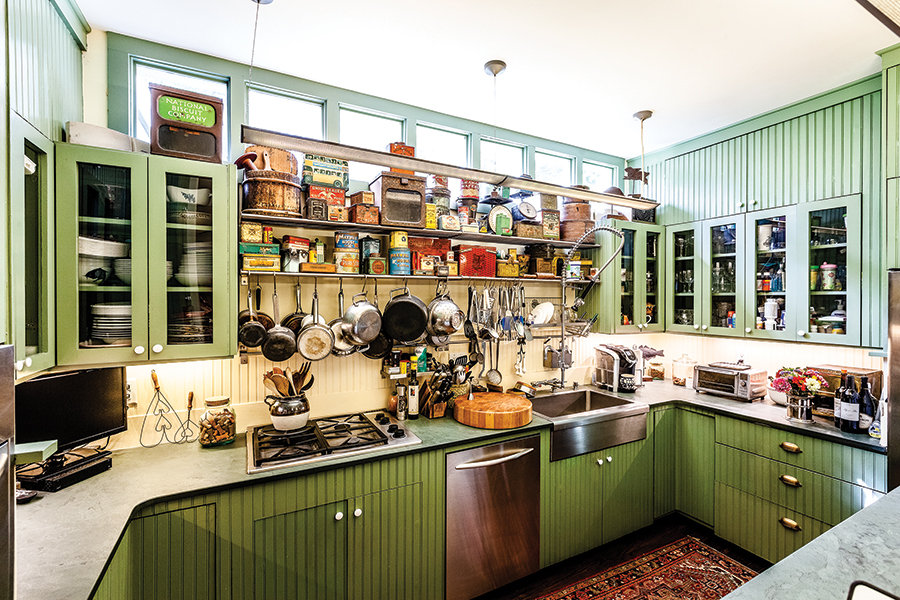 Cottages built early in the 20th century between the tracks and the hotels housed support staff and merchants who served the affluent resort community. Little is known of Cosmo’s history except during World War II the owner’s wife made the second floor into an apartment with small kitchen, which Francy left intact, as part of her office. Surprisingly, the house had a basement — where Scott builds the Waldorf-Astoria of birdhouses — and a narrow garage, which they moved into the backyard, as a studio.

If the heart of a home really is the kitchen then the Samuels’ is well-placed in the middle, along an artery leading from front door to back wall. What a homey, cooked-in kitchen this is, since Scott and Francy share meal preparation. Light comes through transom windows placed ceiling-height. Scott constructed the beadboard cabinets painted a soft, archaic green. Washer and dryer are built into a divider separating the green slate counter from the pathway. Nearby, more beadboard conceals a fold-away ironing board common to homes of the era. Although smallish by contemporary standards, this carefully planned kitchen accommodates tandem cooking. When the meal is ready, Scott and Francy sit down at the dining room table, “like grown-ups,” Francy says, or eat on trays in the living/family room under the watchful portrait of an 18th century granny in bonnet peering down from the mantel. “Aunt Bertie” has become both friend and icon for their project, which had Francy coming down from Boston on weekends to draw plans for Scott to execute during the week.

The master bedroom tucked in a corner of the main floor barely holds a poster bed and antique case pieces. Francy converted a small second bedroom into dressing/closet space. The adjoining bathroom breaks from cottage classic with a wide-board floor splatter-painted by Scott, à la Jackson Pollock, against a black background.

At Cosmo, one word demands a thousand pictures — that word being collections.

Examples: A dining room wall covered with 24 framed prints by a 19th century British aristocrat/caricaturist known as Spy. His exaggerated figures of notables, valued by collectors, were published in Vanity Fair. 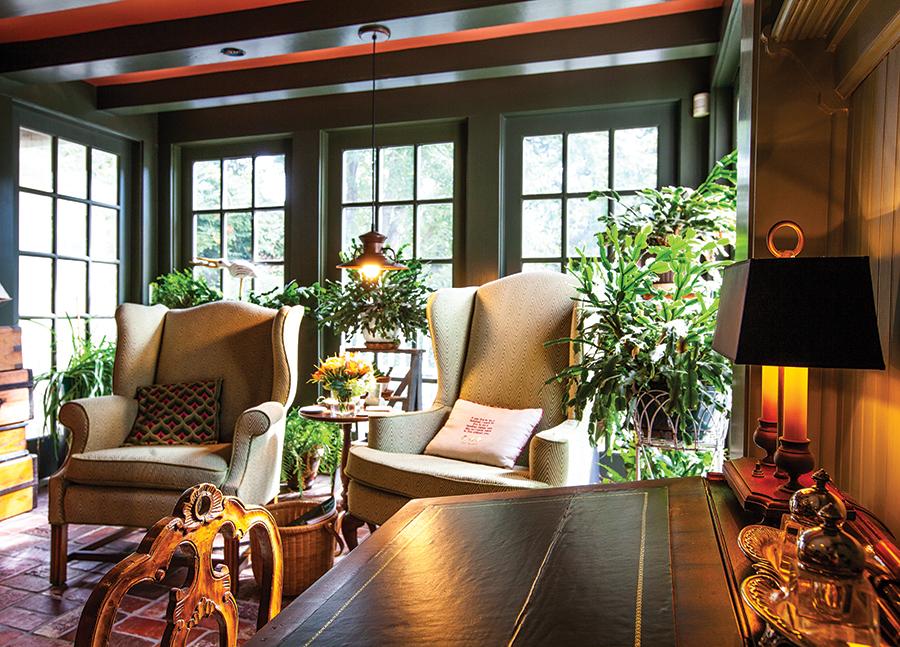 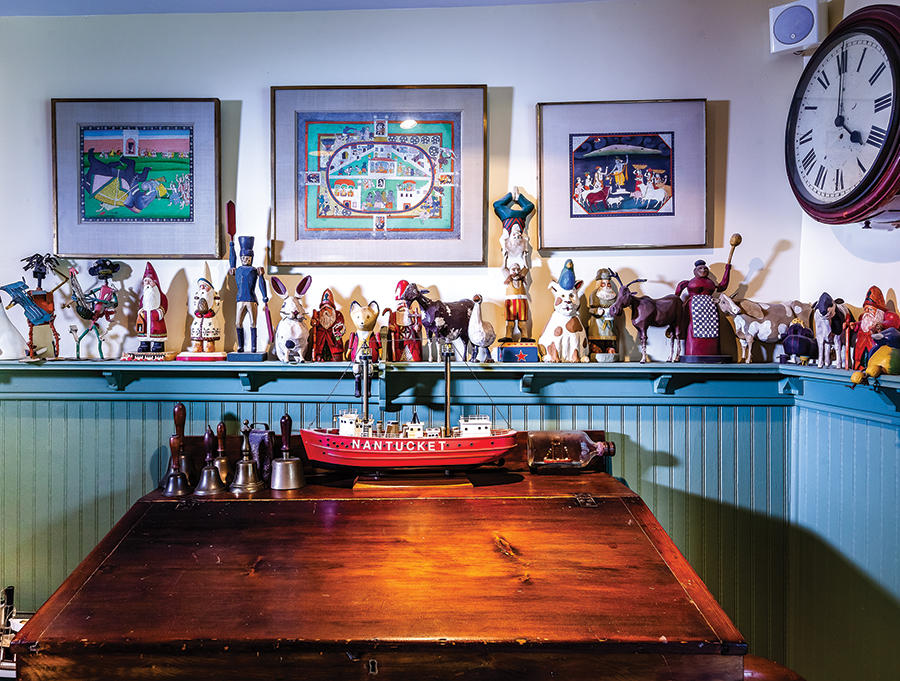 Ships galore — paintings, drawings, postcards and models, including a table-top sized schooner made by a prison inmate; these remind Scott of sailing his own, off Nantucket, as does a framed map of the island, dated 1824.

Carved figurines include multi-national Santas and gyrating African forms, some brought back by Francy’s daughter, an anthropologist.

Family photos; between them, Francy and Scott have five daughters and four grandchildren.

Carpets, some shipped back after attending a wedding in Turkey, followed by a sailboat cruise through the Mediterranean and Aegean. One was woven in Russia, a century ago.

The crown jewel of collections would be Scott’s Victorian mercury glass, displayed in a corner cupboard. This technique practiced in Bohemia, Germany, England and Boston in the 1800s requires blowing double-walled goblets and other objects, then filling the space with a liquid silvering solution and sealing with a metal disk. Silvered and mercury glass became the first art glass forms meant for display, not table use.

Typical of second-time-around couples, Francy and Scott brought to their new home furnishings they couldn’t live without. Every piece has a story. A light fixture has propellers that spin like a fan. The rough-hewn coffee table was a kitchen table, in Nantucket, before legs were shortened. Many formal antiques descend from Francy’s Ohio lineage, where her father — according to the stately portrait in the dining room — was a bank chairman. Fold-down desks, electrified cranberry glass oil lamps, sea chests, display cabinets, a bentwood high chair and a few curiosities, like a post they found buried under the front porch, inscribed H.A. & E.E. Jackman, perhaps long-ago residents. 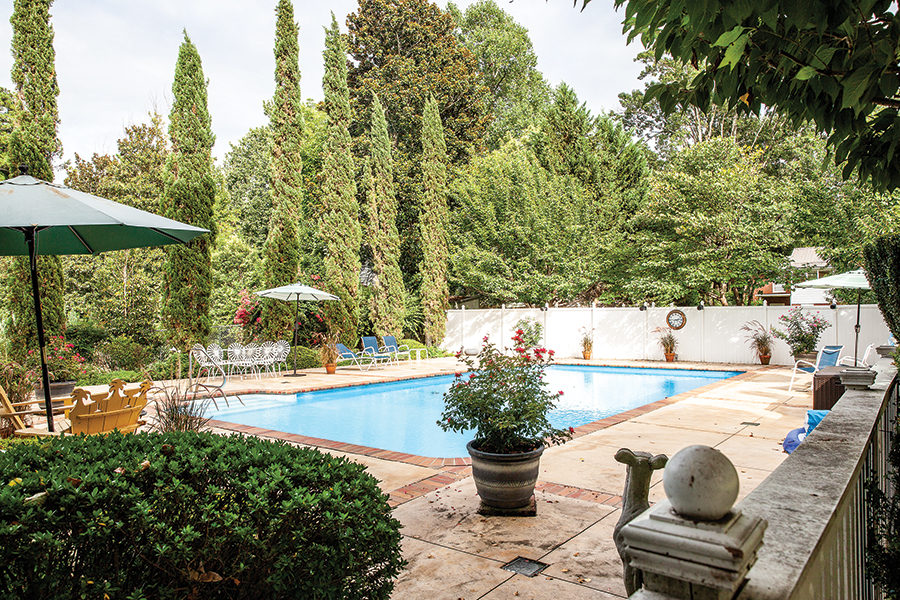 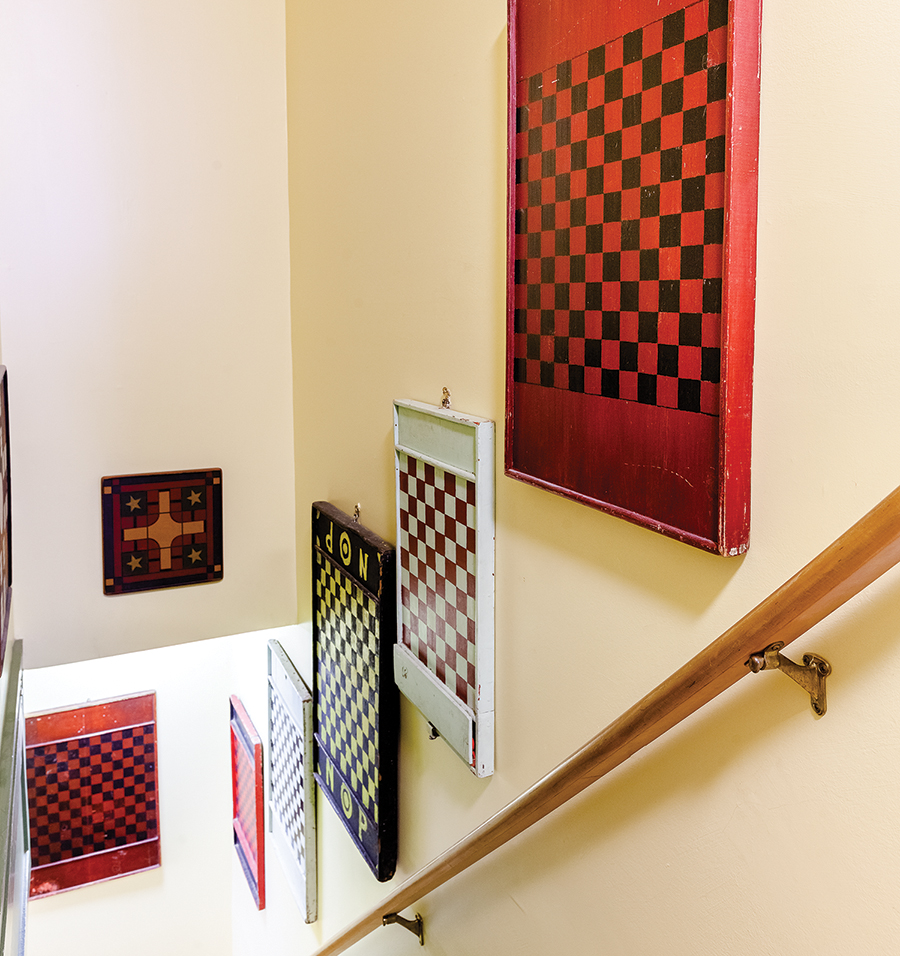 Despite gutting the house and rearranging space, the effect — excluding the glamorous grounds — seems as much preservation as renovation, with a nod to Williamsburg. Coincidentally, “They were my clients,” Scott says.

To protect the integrity of their own home, the Samuels carried out a “grand plan” to purchase and renovate the cottages flanking Cosmo, creating a pocket neighborhood which received a Spruce Up award from Southern Pines in 2014.

Now, the design-build team of Francy and Scott Samuel has “sort of retired.” Looking back, Scott’s only regret is not making the move sooner. “It didn’t feel strange or different,” he muses, with surprise. After 16 years the trains don’t bother any more. They enjoy walking to the library, farmers market, Sunrise Theater and restaurants. Scott continues, “Every time I pull out of the driveway I feel I never want to leave this house. I want to stay here forever.” 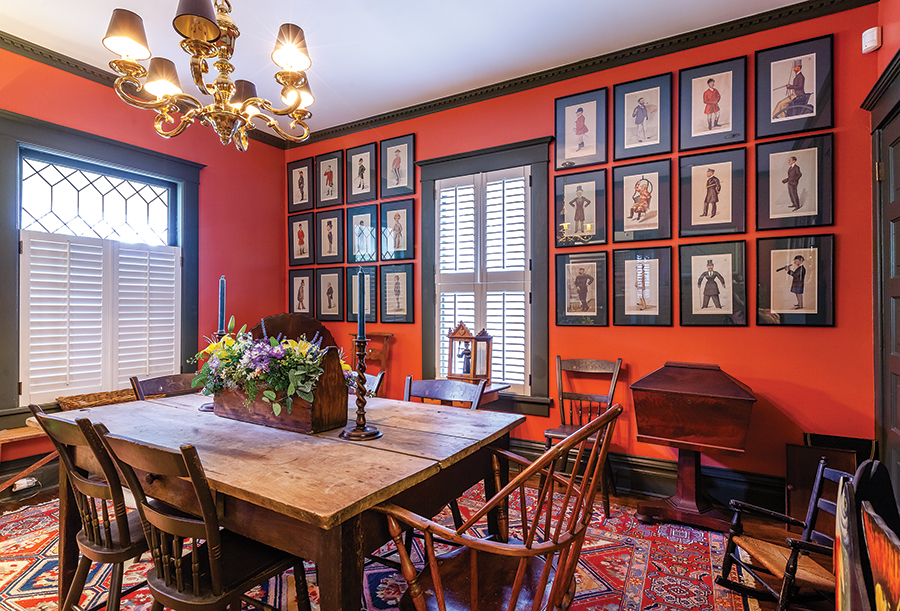 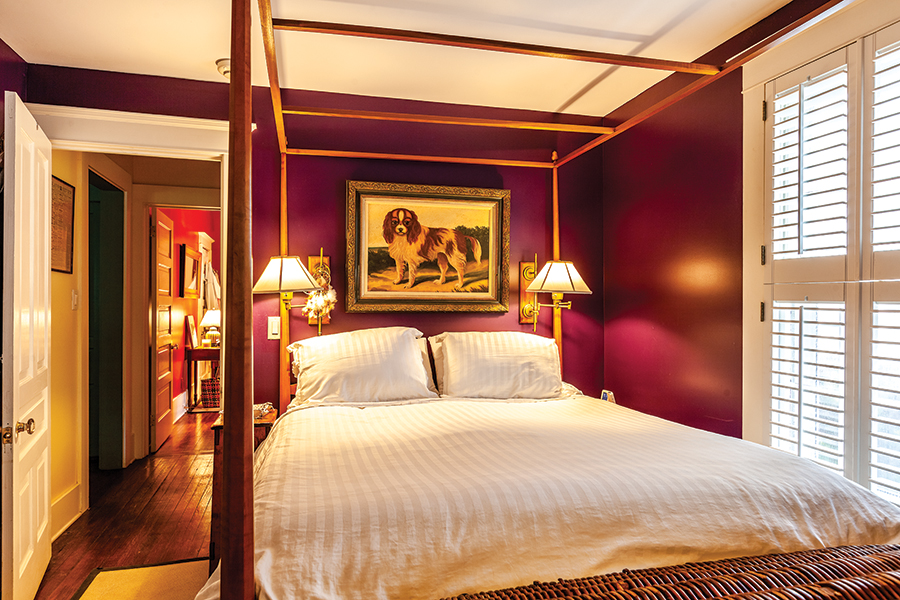