A Pinecrest star shines on Broadway

The first movie Bradley Gibson saw in a theater was The Lion King. He was 8, give or take. At 17, with a Pinecrest High School group, he watched the New York production, enthralled. On July 2, Bradley, now 27, roared into the lead role of Simba in the show that has captivated Broadway for 20 years and won six Tony Awards.

“He doesn’t just put on the mask; he tells the story with his entire body,” says Bradley’s first dance instructor, Gary Taylor, of Gary Taylor Performing Arts. That roar you hear is one of joy for overcoming the odds, for leaping from Aberdeen to Pride Rock in a steady upward trajectory. After Pinecrest, Bradley pursued a degree in musical theater at the Boston Conservatory and, with fellow graduates, headed straight for New York. In just a month, the 22-year-old landed a part in the musical Rocky, which meant learning to box. After touring with the Broadway production of Chicago, Bradley created the role of Tyrone in the musical version of A Bronx Tale. A year and a half into the run his agent called with the news that Jelani Remy, who had played Simba in Las Vegas and then New York, was leaving The Lion King. Bradley’s gut reaction: Go for it. After days of tense auditions and callbacks, the email arrived during a matinee.

Luck? Miracle? Fluke? More likely planning, discipline and a positive attitude. Expressive eyes, a fab smile and a lithe, muscular dancer’s body helped. But the theater world is full of qualified hopefuls waiting tables between casting calls. Bradley’s “it” factor, Taylor continues, is an amazing voice and stage presence. “He makes everybody else on stage look good.”

Despite a grueling schedule — eight performances a week — Bradley sounds relaxed. “My first exposure to musical theater was watching movies like Grease, The Sound of Music, My Fair Lady. When I saw people singing and dancing it seemed so natural, like something I should be doing.”

His acting debut was as a wise old dog in the Christmas play at Aberdeen Elementary. By high school he had already participated in community theater, danced at Terpsichore and sung in a choir.

Adam Faw, Pinecrest Players Theater Arts director, remembers Brad at 14: “He was fresh in the theater arts class. I had seen him in middle school — he was different, he stood out. Many of my students were talented but not of that caliber.”

The impressive numbers march on.

By 16 Bradley was performing in productions of Crazy for You and A Chorus Line.

“He was a triple threat — singing, dancing, acting,” Faw continues. Most important: “He had a positive work ethic.”

His solos often brought down the house. 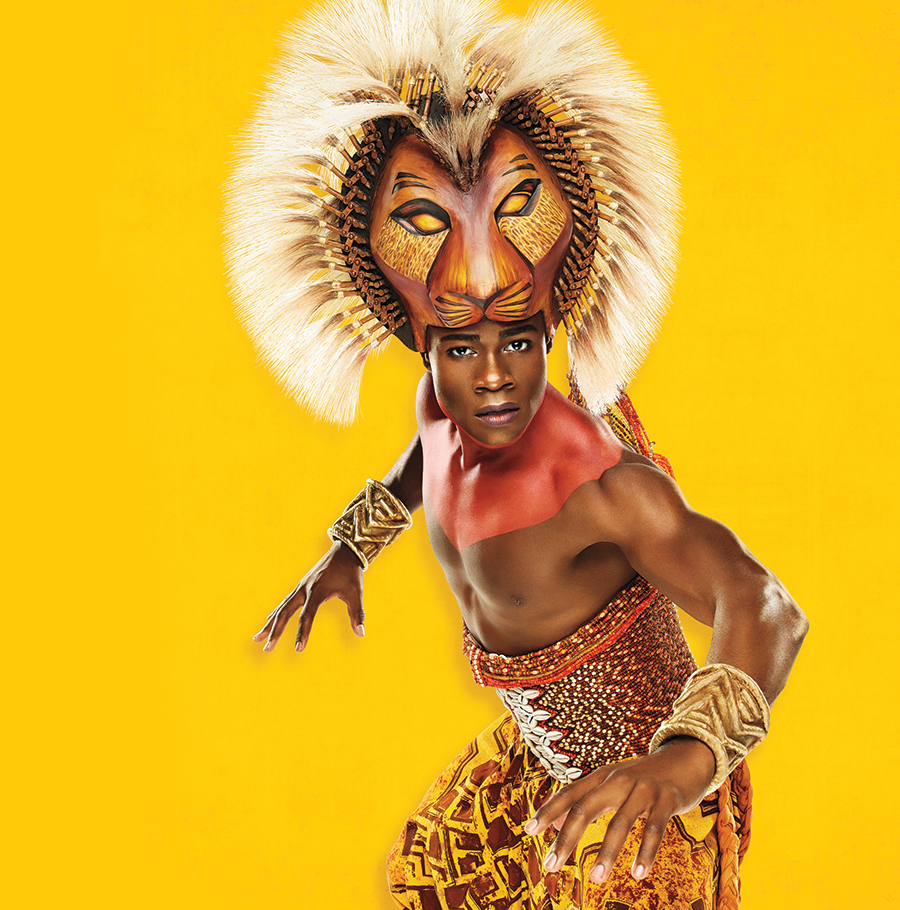 The Boston Conservatory was a whole new ball game. “It was the shock of my life. For the first time I was around nothing but artists,” says Gibson. The historic Boston Theater District is where Broadway shows open and sometimes close — a suitable environment to polish his craft. The once-shy young man from a small Southern town blossomed, made friends. After graduation his group moved to New York, where they found a supportive community.

Playing Tyrone in A Bronx Tale gave the relative newbie more leeway than he would find taking on Simba as part of an established cast. The latter meant rehearsing alone with The Lion King’s director and also with its choreographer, allowing just enough interpretation without upsetting routines. “It was the first show I had seen where all the cast members were people of color — Asian, Hispanic, African-American. This was encouraging,” he says. As was the plot, chronicling a voyage of self-discovery not unlike Bradley’s own. “It was a perfect fit.”

For now, the Sandhills wonderchild is too consumed by work for much introspection. The role of adult Simba is extremely physical. Imagine the energy expended six days a week, twice on Wednesdays and Saturdays. “It’s like running a corporation,” Bradley says. “I have to take care of myself.” His routine includes strengthening workouts, singing lessons and dance classes, a healthy diet, meditation, yoga, plenty of sleep. An injury could be devastating. So would going stale in the role, though there’s little chance of that. “The freedom of performing is to play someone else, to put yourself in the back seat,” he says.

Bradley arrives at 6:15 for a 7 p.m. curtain; the adult Simba doesn’t appear until an hour into the three-hour show. His makeup is complicated. Getting used to moving about in the leonine headdress and beaded corset took practice. The production elicits gasps for its reverse anthropomorphic costumes, as African “animals” lope down the aisles.

A favorable alignment of stars is not lost on the young performer. “I look in the mirror and know how lucky I am, but I also know luck is where preparation meets opportunity.” Self-confidence kept him afloat through callbacks that didn’t happen, parts that slipped away. “My life is so overwhelmed with blessings. I keep climbing because that’s all there is to do.”

Gibson’s success doesn’t surprise Southern Pines yoga instructor Brady Gallagher, a childhood friend and co-performer in West Side Story at Pinecrest. “He’s no different today than in high school. He was born for this — he didn’t have a backup plan.”

Beyond good fortune and natural ability, Bradley credits advice from his great-grandmother, Ruby Floyd, who raised him: Work hard! Do the best you can! It doesn’t matter if it’s on the Robert E. Lee Auditorium stage or the Minskoff Theater bordering Times Square. “He was always dancing in front of the TV,” Floyd recalls. “He wouldn’t stop watching that Lion King cartoon movie. And it paid off.”

Great-granny Floyd has seen all of Bradley’s Broadway roles. In July she watched him become Simba, tears streaming down her face. “When it was all over I stood up with my cane and applauded.”

As do his friends, admirers and mentors, 570 miles south.

“His spirit is his heart,” Gallagher observes.

“Bradley fought against odds in a world that’s already tough,” Taylor says. “When I first saw him, I said that’s a star.”

“I am beyond proud of Bradley,” adds Faw.

And the list of accolades goes on — a good sign — because numbers still count, even when, at 27, you’re batting a thousand.  PS

Sandhills Repertory Theatre and Michael Pizzi present “Bradley Gibson: The Homecoming Concert” at 7 p.m. on Nov. 26 at the Robert E. Lee Auditorium, Pinecrest High School, Southern Pines. Gibson will sing and talk about his career, which blossomed on this very stage. Part of the proceeds will benefit the Sandhills Theatre Arts in the Schools fund and other community organizations. Tickets are available at www.sandhillsrep.org. Students 18 and under with ID are $15; general admission advance purchase is $40; seniors and military with ID, $35; VIP (includes photo op with Gibson) $75. All adults at door: $50. For more information email sandhillsbroadway@gmail.com.