Since it’s not a kit cabin, the layout can be unpredictable. Furthermore, manicured grass, tall hollies and a bubbling fountain overlooking Hyland Golf Club elevate this cabin over the Shaw House compound or anything attributed to Malcolm Blue.

Sealing the deal, the five-bay garage/workshop shelters five Brass Era (circa 1900) cars Holden has restored to drivable glory. Like King Tut’s sarcophagus, they are historic objects d’art enhanced by his knowledge of their provenance and mechanics.

Holden lovingly strokes the bumper of one, then gestures toward the cabin: “This (car) is more valuable than my whole property.” 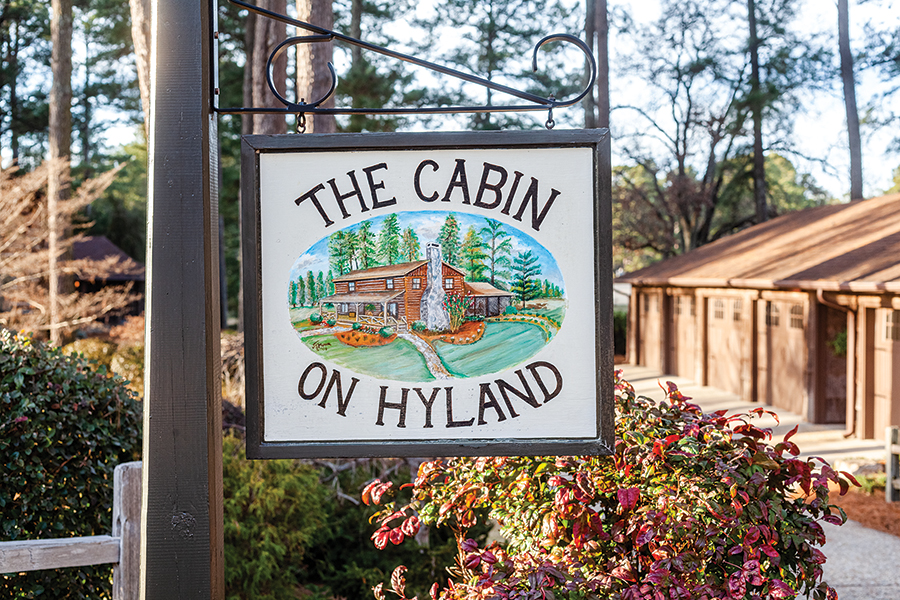 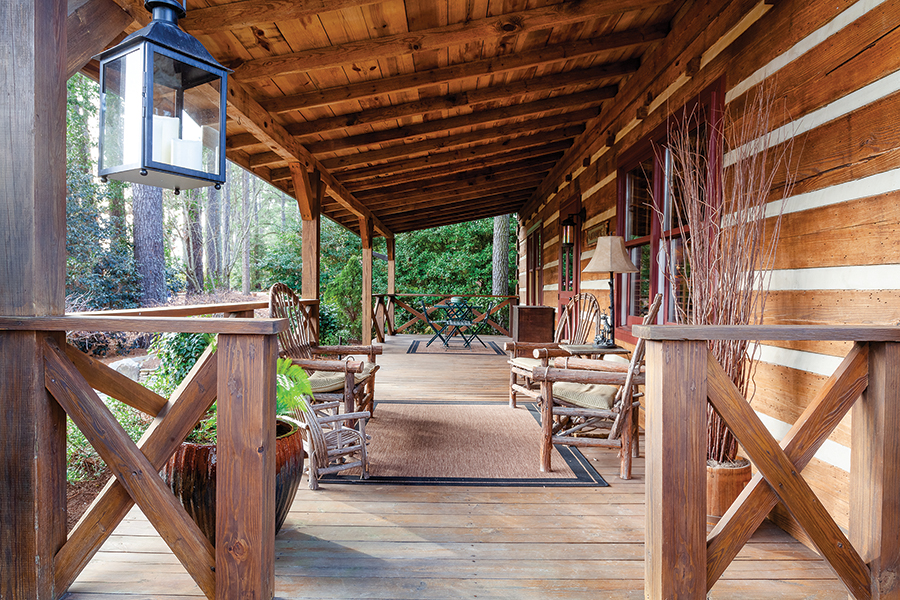 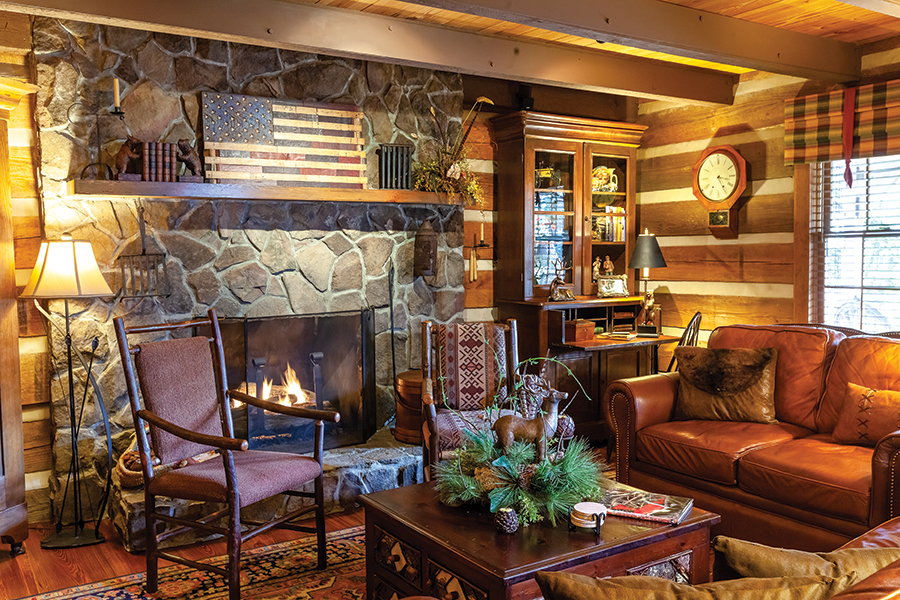 Holden caught cabin fever growing up in frigid North Dakota, where his father was a ranch manager, then a feed salesman. He pulls out a black and white photo taken of his family, mid-1950s, in front of a hardscrabble log dwelling as unrelated to his own as Willie Nelson is to Perry Como. Before that, they lived in what Holden calls a “basement house on the poor side of the tracks.” The log cabin had been abandoned. Yet Holden remembers being happy there, especially at Christmas, when a freshly cut tree was illuminated by real candles.

Holden discovered Moore County in the 1970s while serving in the 82nd Airborne Division. “I married the ‘farmer’s daughter’ at Fort Bragg.”

After discharge he did well in real estate and mortgage lending, soon establishing his own company and bringing up a family in a large, formal residence. “We used to drive to Pinehurst often in the late ’80s. You could see the cabin clearly (from U.S. 1).” Intrigued by the elongated garage, he stopped.

“I’ve admired your cabin for a long time. Is it a kit?” he asked the owner. No. The pine logs cut from this very lot are joined with 3000 PSI (pressure per square inch) concrete. Interior/exterior wall maintenance is minimal, although retrofitting for wiring and ductwork, if necessary, can be challenging. The floorplan was tight but sufficient.

They spoke for a while; coincidentally, the owner was planning to sell. Holden had vowed to retire at 39. The modest size (just under 1,800 square feet) was perfect, since his daughters were grown.

He struck a deal with the owner in 1993. The Holdens would sell their fancy furniture, prowl for country antiques, landscape the grounds (including a tall privacy hedge), and adopt a more relaxed lifestyle.

On the day Holden retired, his wife was diagnosed with a brain tumor.

“I lost my ambition for making money. There were other things I wanted to do with my life, including taking care of my wife.”

She died soon after. Holden eventually married a family friend, who died of cancer in 2019.

His log cabin houses memories of both — a showplace minus the glitter. Instead, his concept uses forest hues and materials: A brick fireplace was replaced by stone. Tree bark was cut, flattened and fitted as paneling and window valances. Faux-painted walls also resemble bark. An antler chandelier joins mounted bear and mule deer heads. Colors throughout blend browns with greens, an occasional deep red against leather upholstery. 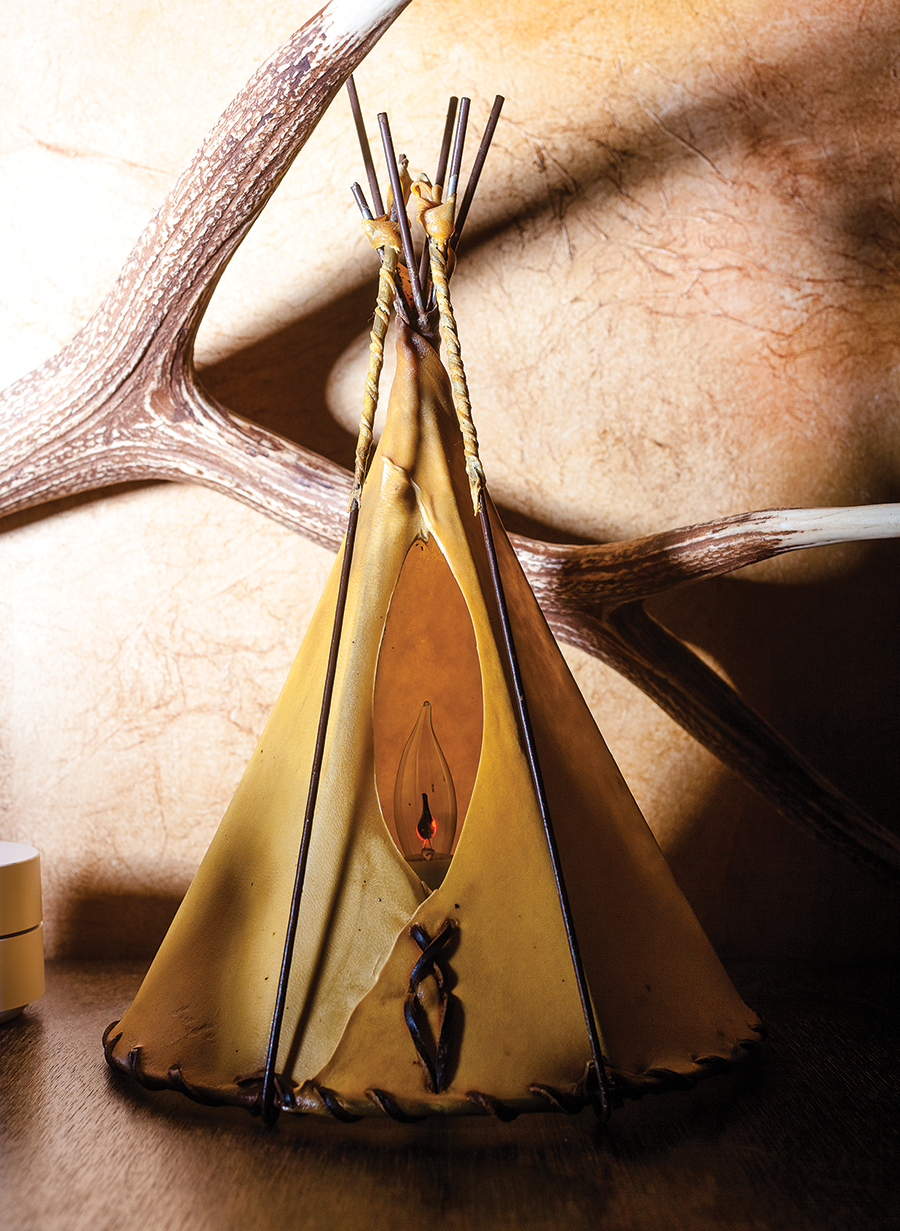 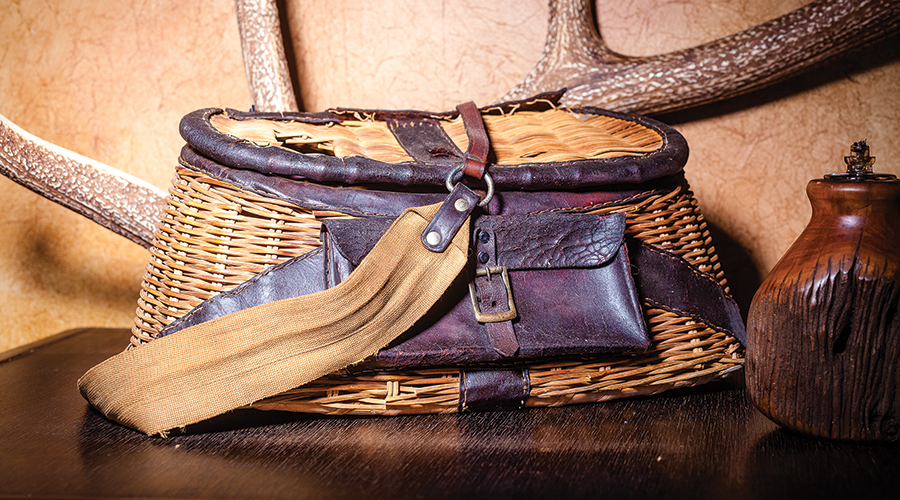 Except for the upstairs master suite with pale wall-to-wall carpet and unobstructed windows, the house is dark, a result of first-floor windows opening onto a covered porch across the front and a screened porch at the rear, both done in rocking chairs and Amish twig furnishings. Holden installed skylights in the kitchen’s vaulted ceiling, all the better to illuminate this unusual room, which combines distressed painted wood cabinetry with an electromagnetic cooktop that creates heat inside metal pots. The island is built from architectural salvage components. Italian granite countertops add an unusual wavy design in gray-green. A massive schoolmaster’s desk fills one corner. Holden is proud of finding matching antique Windsor stick-back chairs, painted black, for the long table within the kitchen dining area.

One risky departure from the cabin motif: a contemporary staircase installed against a wall, with no railing on the open side.

Holden seems most pleased with details, the small artifacts serving as wall decor, like a spice rack with tiny drawers. Or a child’s sleigh from Vermont. Or a portrait of somebody’s grumpy ancestor, whose eyes seem to follow the beholder. His high-tech  thermostat hides behind a weathered mailbox. A flintlock rifle circa 1820 hangs over a door, and a framed Confederate war bond occupies the stairwell. 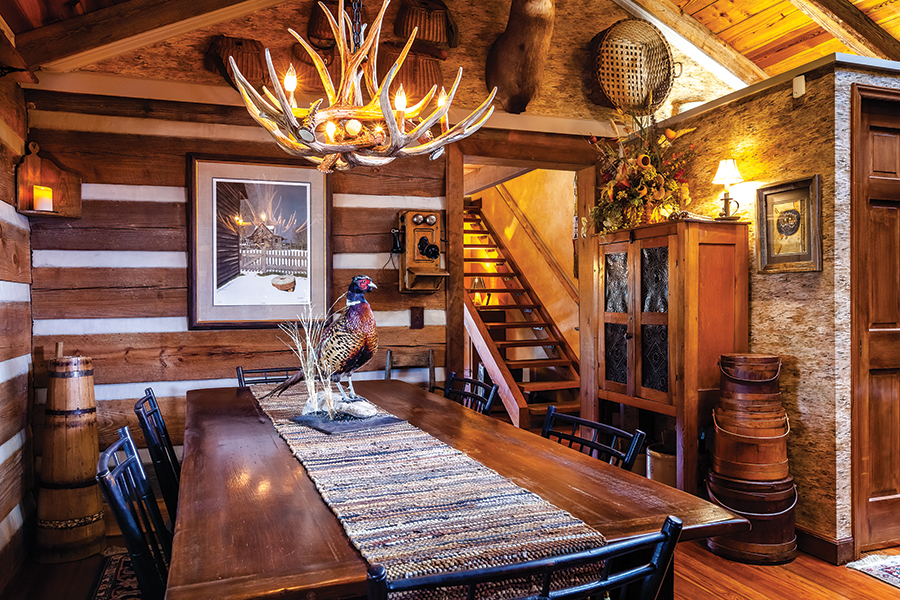 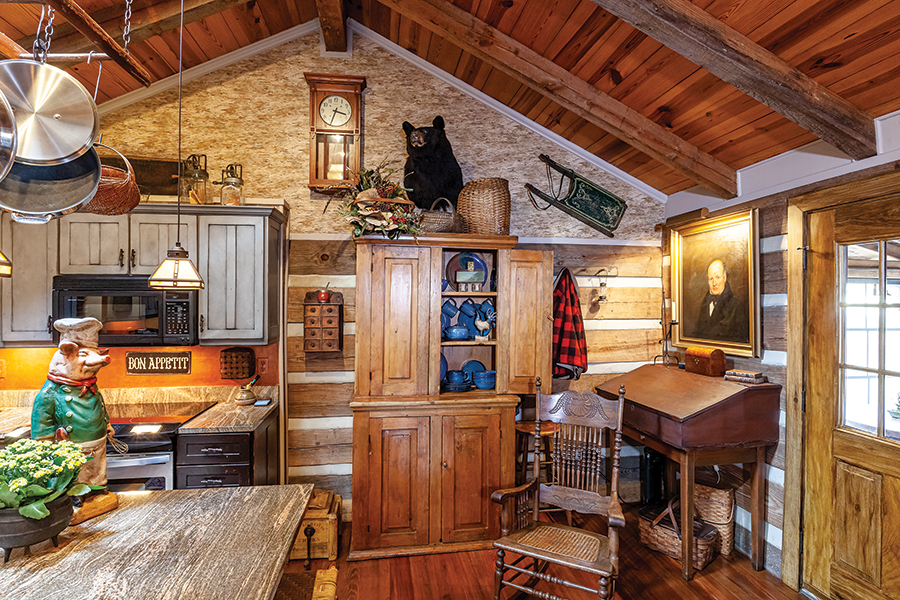 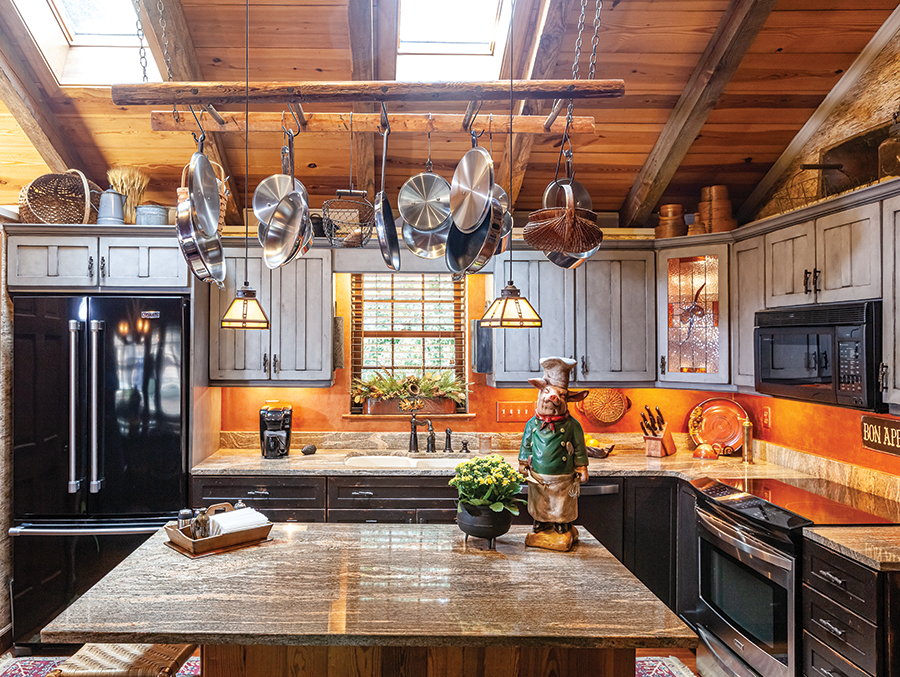 “What do you think this is?”

Early American life is represented by “possibles” bags hanging from a hall tree — utility cross-body carry-alls used by hunters and frontiersmen, which could, possibly, contain anything.

“I tried to keep (the cabin) as authentic as I could.” Otherwise, Holden filled in with reproductions from North Carolina artist/designer Bob Timberlake’s furniture collection. 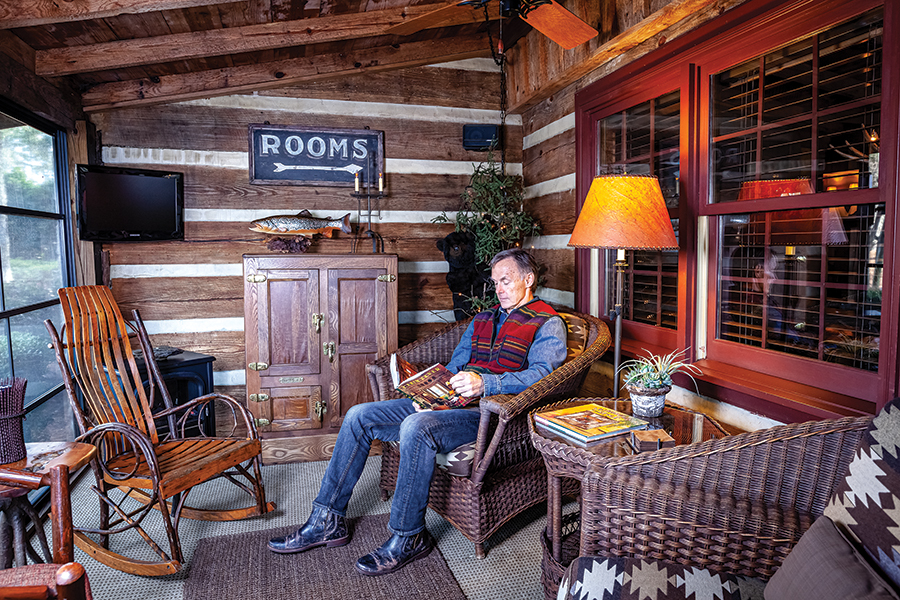 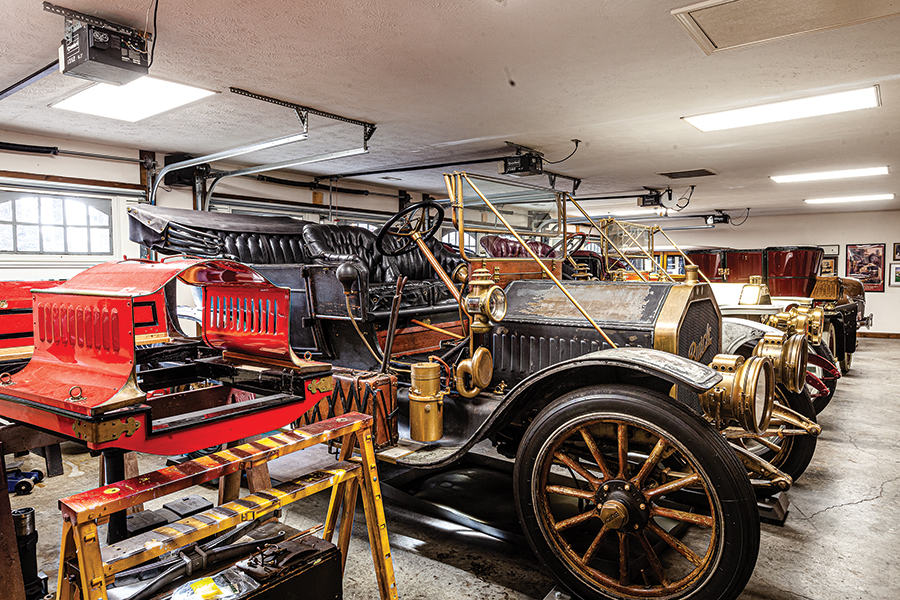 Nothing in this highly personal cabin even comes close to what awaits in the garage, which was a major selling point for Holden. He enlarged it to 1,900 square feet, larger than the cabin, installed heat and AC but, as yet, no plumbing. Obviously, the garage is his happy place — a spotless showroom, what the Louvre is to Mona Lisa.

Holden is a familiar name among this rarified group of collectors. His 1904 Cadillac touring car took first prize in the Brass Era (1895-1915) category at the 2013 Concours d’Elegance in Pinehurst. This and his other four open cars (one seats seven) defy description, particularly since he restored the motors and bodies himself. Occasionally, he’ll take one for a spin around Southern Pines. Imagine the reaction.

As for the cabin, after living there for 27 years, Holden still calls it a work in progress. “It’s like living in a vacation home,” he says, then relates this anecdote, with pride:

Some time ago, the cabin was on a home tour. Since homeowners must disappear for the day, Holden chose to peruse other participants. “I overheard two women discussing the elaborate houses they had already visited.”

“Just wait until you see the cabin!” one exclaimed. 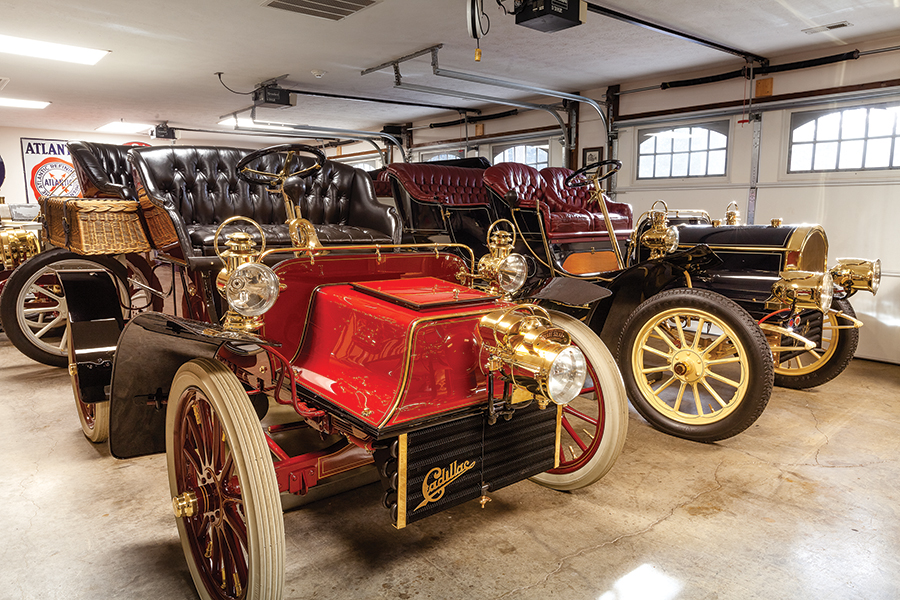 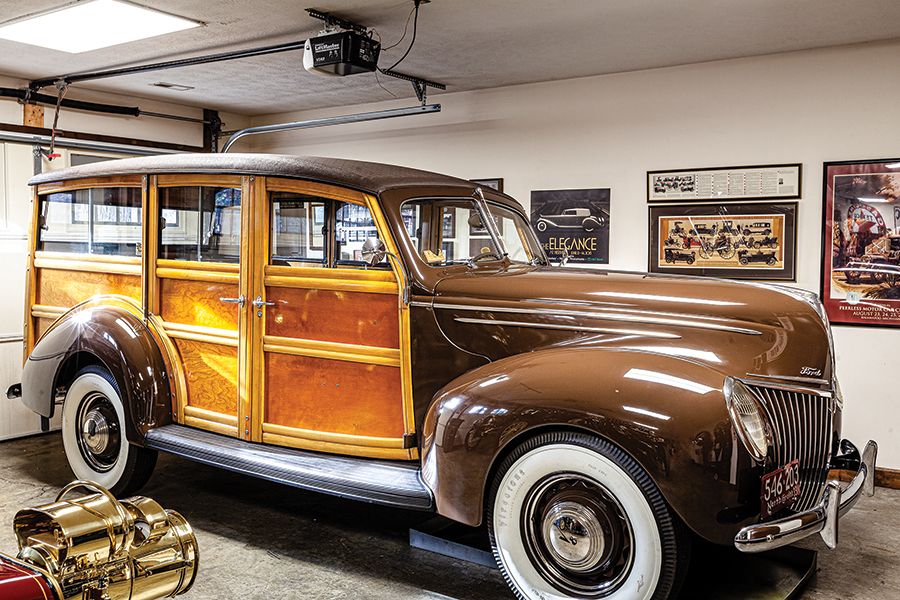