Rough-hewn exterior belies the comfort within 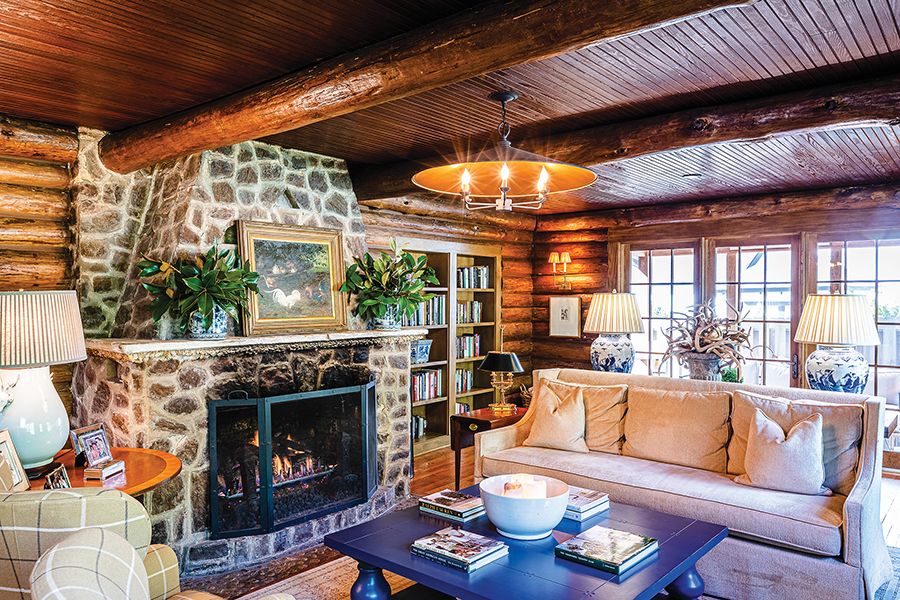 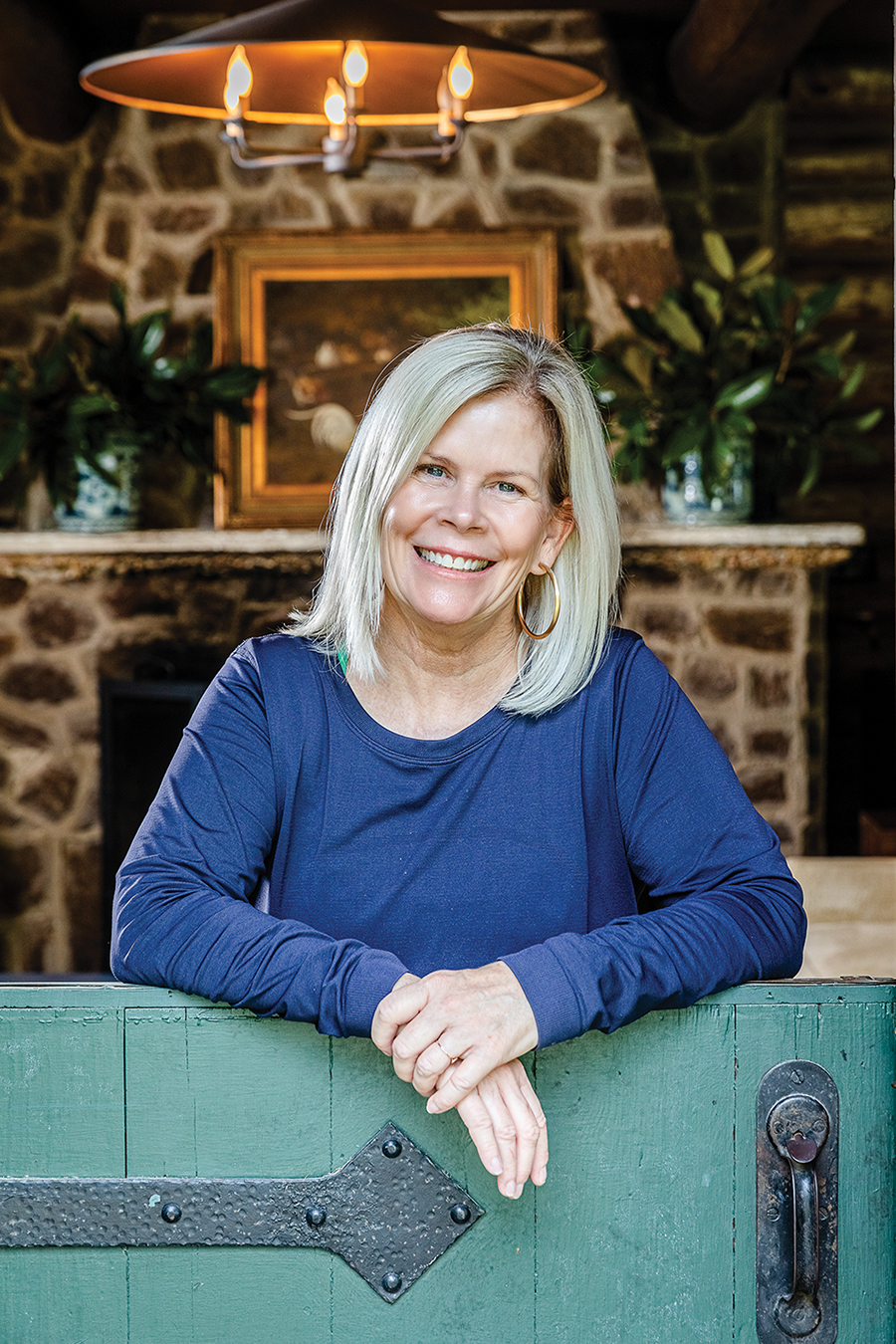 The image of a cabin as a lowly dwelling lacking basic amenities evolved long ago from 19th century shelter into 21st century mountain retreats, ski lodges and vacation hideaways. Abe Lincoln may have been born in one, but it bears no resemblance to the adaptation Kelly Rader has wrought in Pinehurst. Based on comfort and informality, her rebuild may look rustic on the outside but within, soft jazz wafts from a sound system. Half a dozen flat screen TVs hang from walls that remain log only in the living room. Mile-high duvets cover queen-sized beds except for built-in bunks awaiting grandchildren. A screened porch opens onto a stone terrace and, from the new second story, dormers look onto a quiet lane leading into the village.

There is nothing oversized, nothing pretentious. Everything is welcoming. Call it rustic elegance. It was a formidable undertaking for a woman who admits preferring her elegance rustic-free like her former homes — a stately Georgian brick built in 1913 with carriage house and pool in St. Louis, or an Upper East Side Manhattan apartment.

Kelly grew up in Montclair, New Jersey, a town known for its fine residences. Her mother, Pat Johnstone, was a golfer on the amateur circuit. When her parents retired to Pinehurst Kelly wanted to be near them. No better place than the village, a theme park for retirees from everywhere strolling the lanes, rocking on porches, eating at cafés, shopping at farmers markets, living the good life in restored 1920s cottages.

The most likely prospect was a small log home built about 1925 for glove czar Percy Arnold for $5,000 — at the time considerably pricier than its neighbors. Exterior and interior walls were logs, and the ceiling beams massive tree trunks. A stone fireplace dominated the living room. Streetside, Kelly recalls, “It didn’t look like it belonged.” 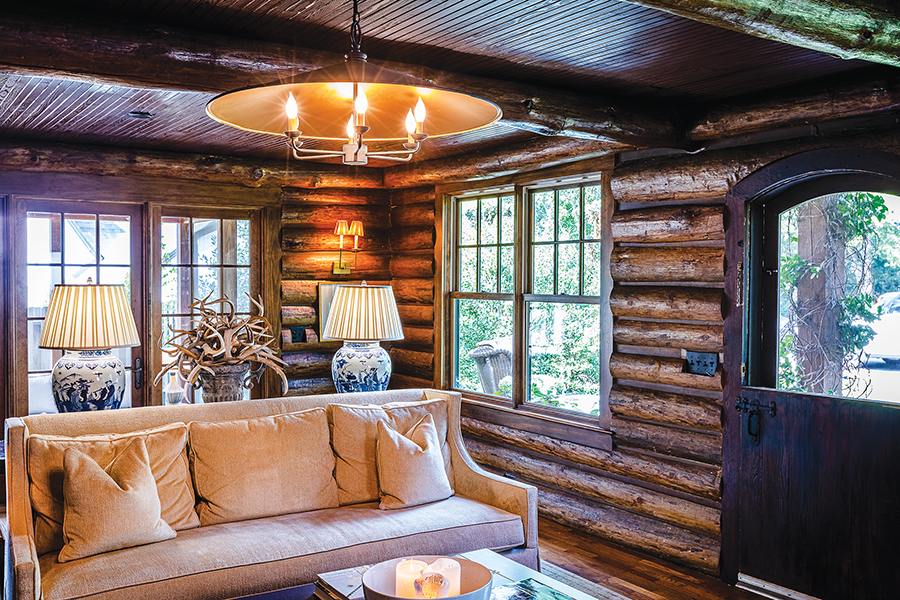 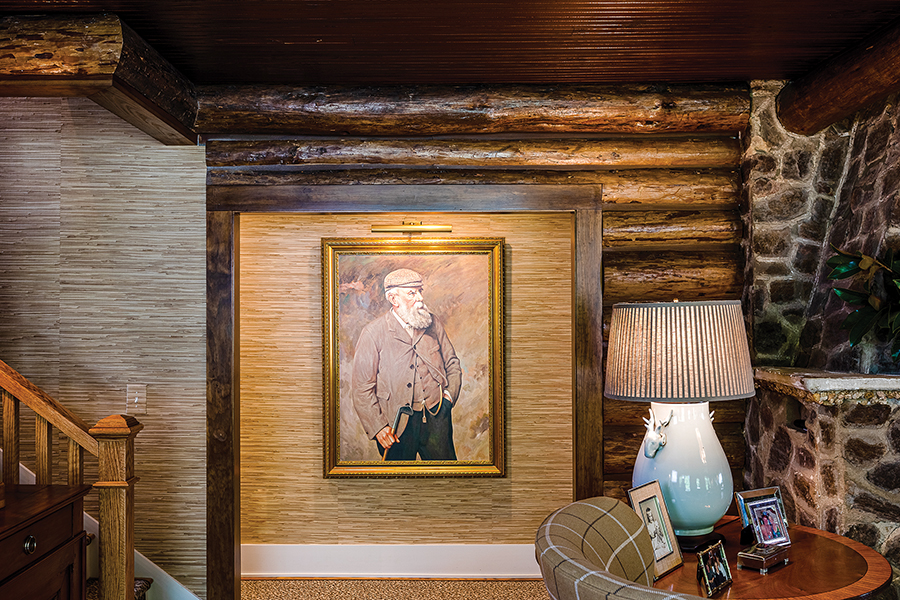 But it was for sale, and they were curious. Coincidentally, Bill Rader had noticed it advertised online three years before. Let’s take a look, they decided.

“We walked in . . . and fell in love with the fireplace,” Kelly recalls. Both appreciated the cabin ambience — Bill’s family owns a resort in Pennsylvania composed of 39 log cabins.

“My Cabin,” as it was known, had passed through many hands and undergone several upgrades, including a kitchen fashioned from a one-car garage. 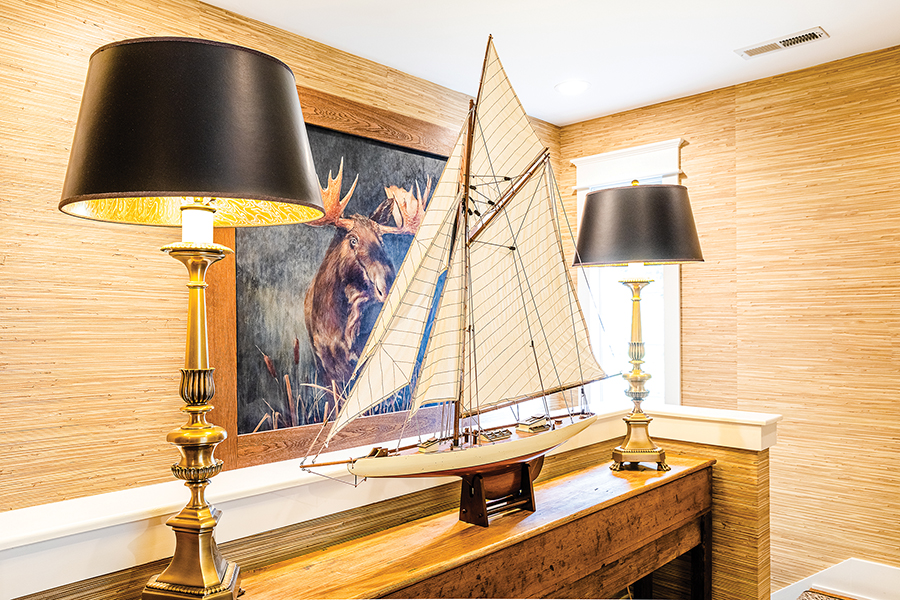 They purchased the cabin in 2015. Planning the renovation took a year, construction two. According to town regulations, they could build up but not out. A full second story with dormers was added, giving the footprint more substance. Weathered logs were removed and replaced with new ones in the living room. Elsewhere, interior walls were faced with conventional materials. “It was too dark. I’m a white-and-beige person. I like a Ralph Lauren feel,” Kelly says.

Her desire for light is served by multiple small-paned windows, some with shutters, installed at various heights, most surrounded by wide moldings which themselves enhance the décor. Rather than depending entirely on lamps or ceiling fixtures, Kelly chose sconces wired directly into the wall, to avoid visible cords. Also absent: clutter.

Doors leading from the living room into the now light-walled master suite were sealed (to increase privacy), with the space retooled as built-in bookcases. Dutch doors to the outside were added, along with an old-fashioned manual doorbell and wood-framed screen door. A small garden is fenced and quiet. 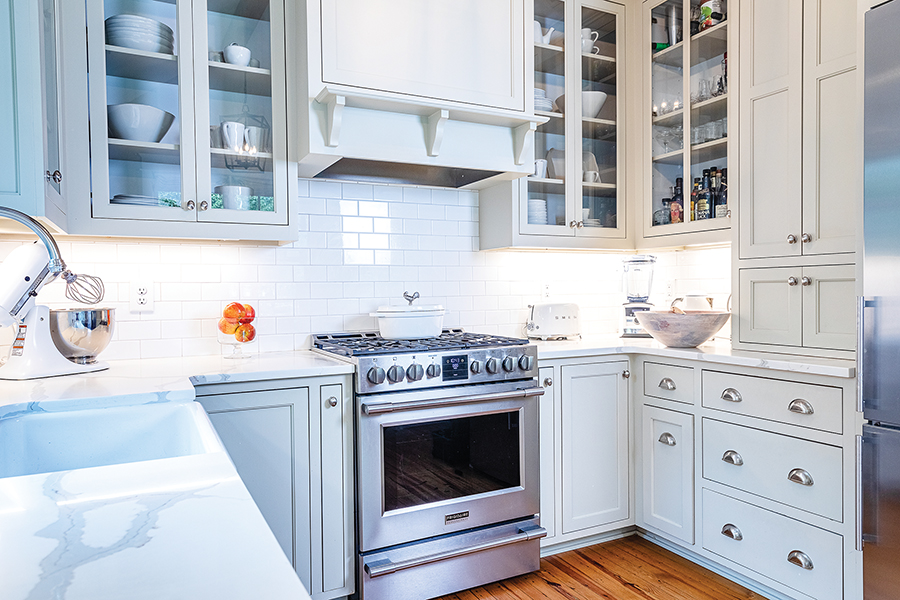 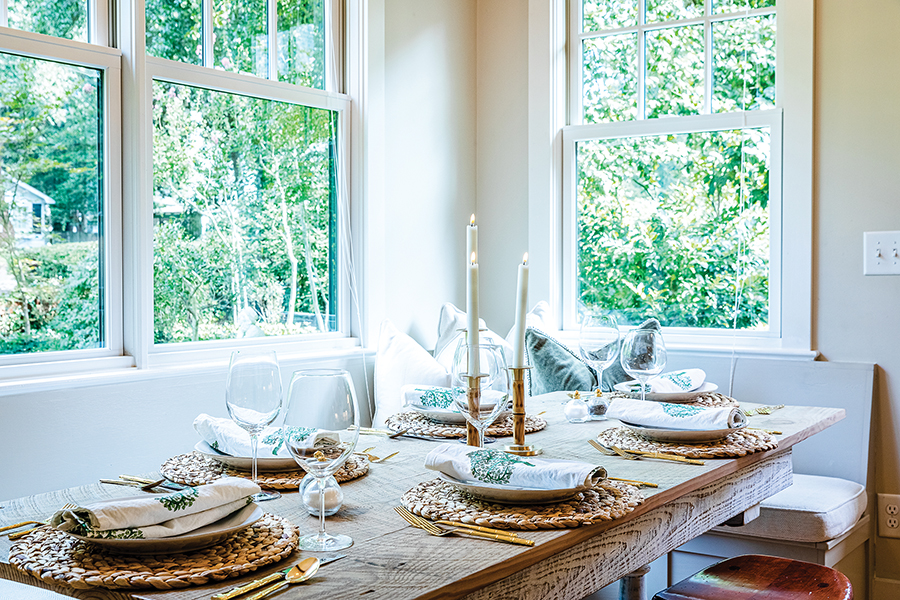 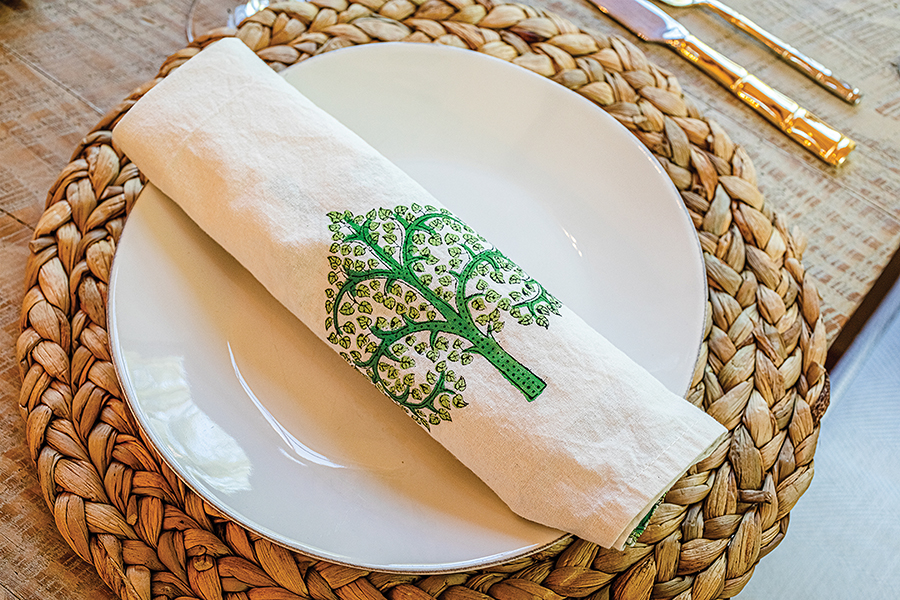 “It’s like a fishbowl. We sit here and wave at people walking by, so much fun,” Kelly says.

Instead of stark white, kitchen walls and cupboards are painted a variation with the slightest tinge of green. There is no dining room. Eight can eat comfortably at the kitchen table. On holidays, an empty space at the end of the living room is filled by a hunter’s table with leaves that fold out to accommodate at least another eight. 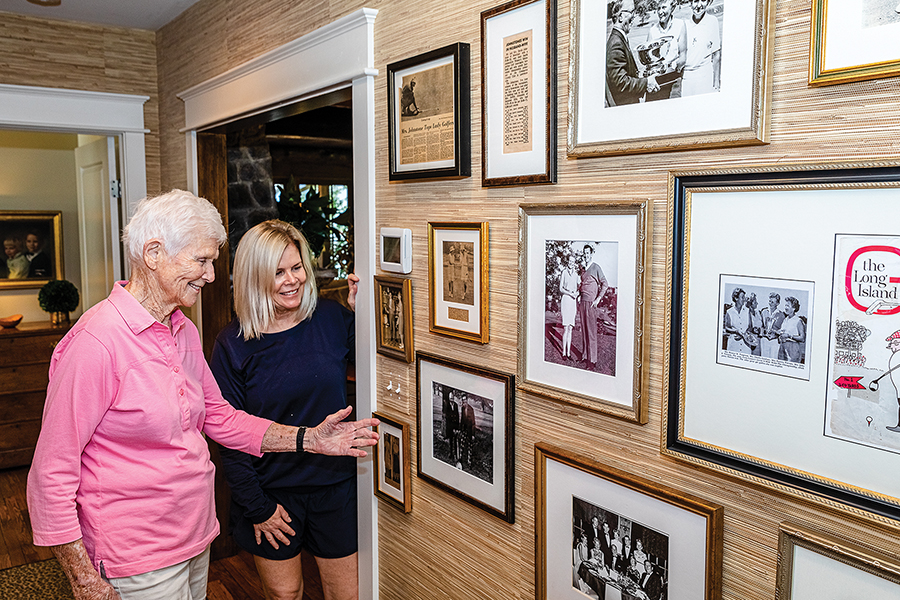 Hallways are covered in rough grasscloth for texture and practicality. They wipe clean. Kelly devoted one hallway to framed clippings from her mother’s golf career. A larger-than-life portrait reproduction of legendary golf pioneer Old Tom Morris is visible to passers-by, through a front window.

All four bathrooms are light, bright and new, lots of white and glass with contrasting navy blue. Off the living room, a perfect little screened conversation porch opens onto a terrace. 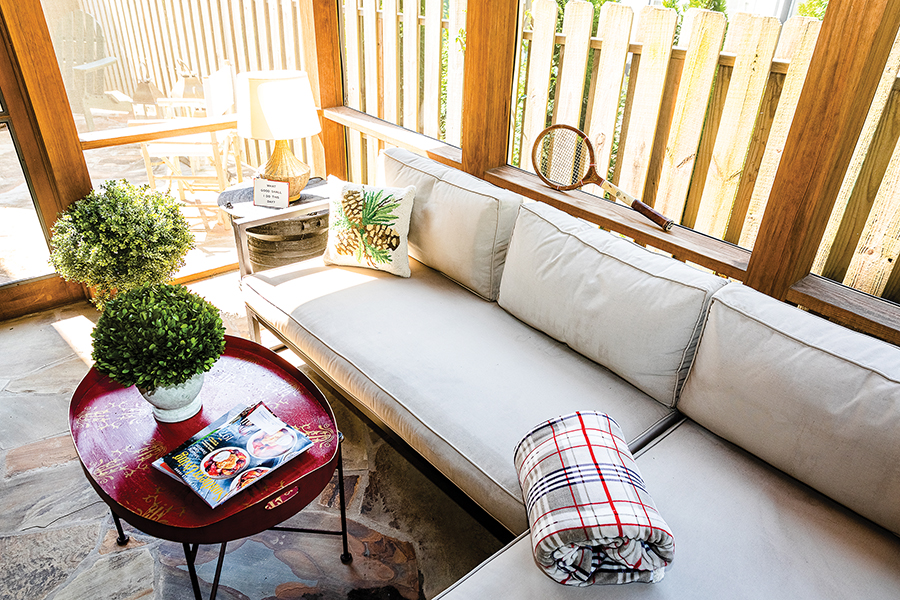 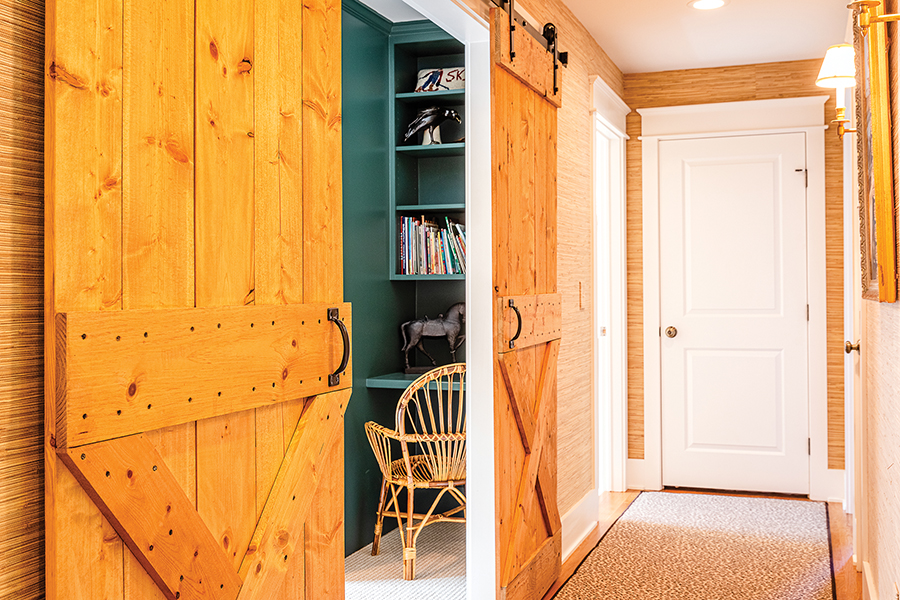 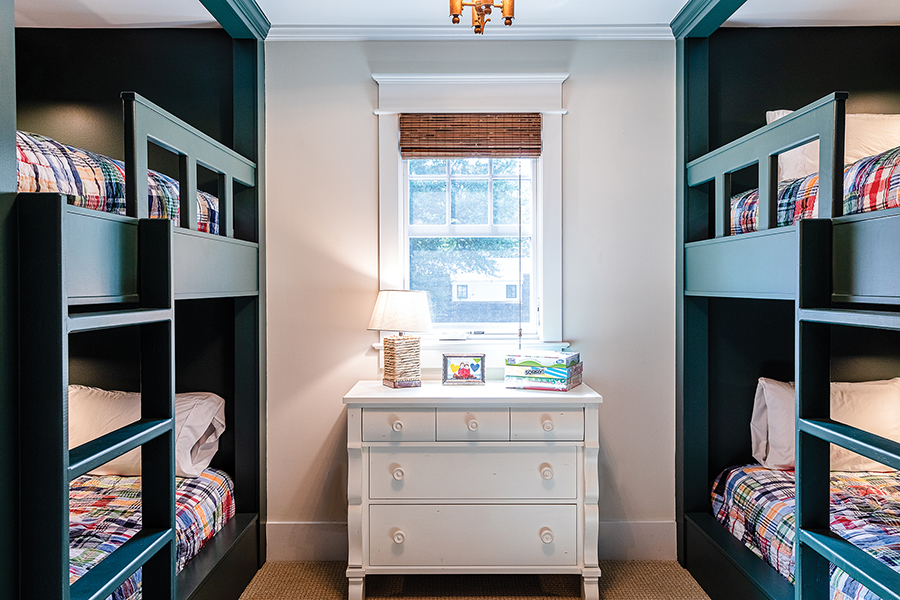 Furnishings defy period or classification but illustrate a trend popular with downsizing retirees: out with the old, start afresh, which doesn’t always mean new. Kelly haunts Design Market in Aberdeen, estate sales and other sources for tables, chairs and case pieces. In the living room two upholstered chairs swivel, allowing their occupants to grab hors d’oeuvres off the massive square coffee table, then spin back to a TV mounted over a breakfront. Bent bamboo chairs accent the master bedroom. A well-worn blanket chest from Bill’s childhood found a place along with an antique metal disc player and a painting by Bill’s mother. 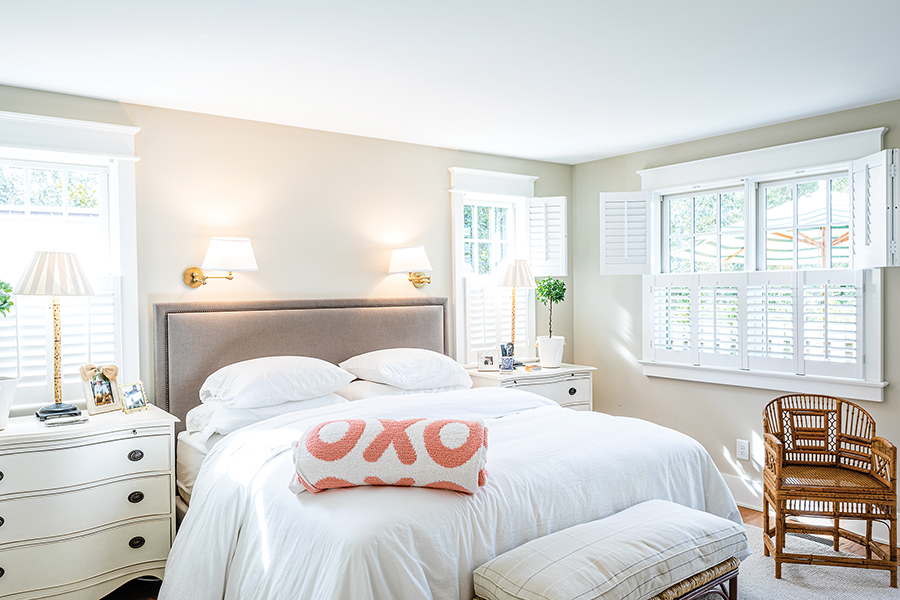 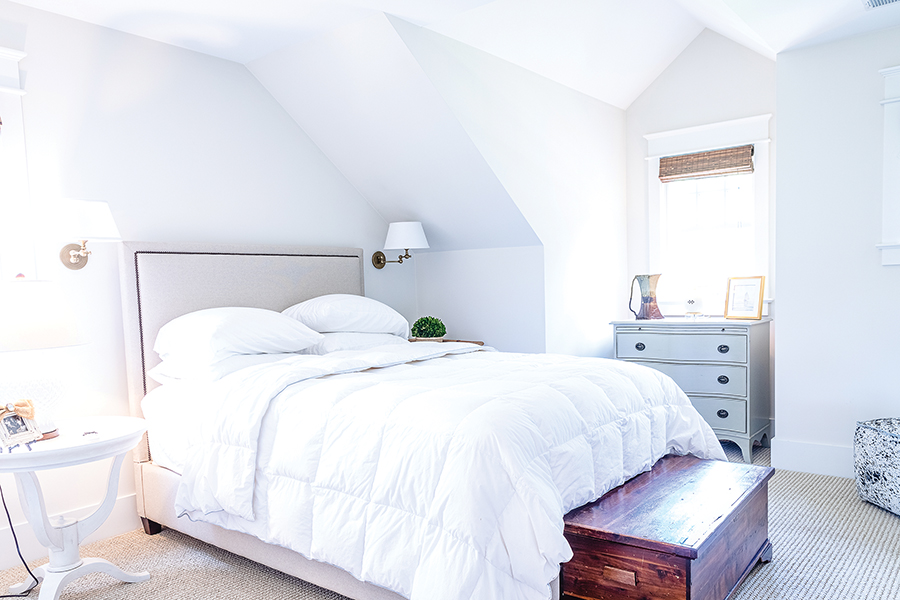 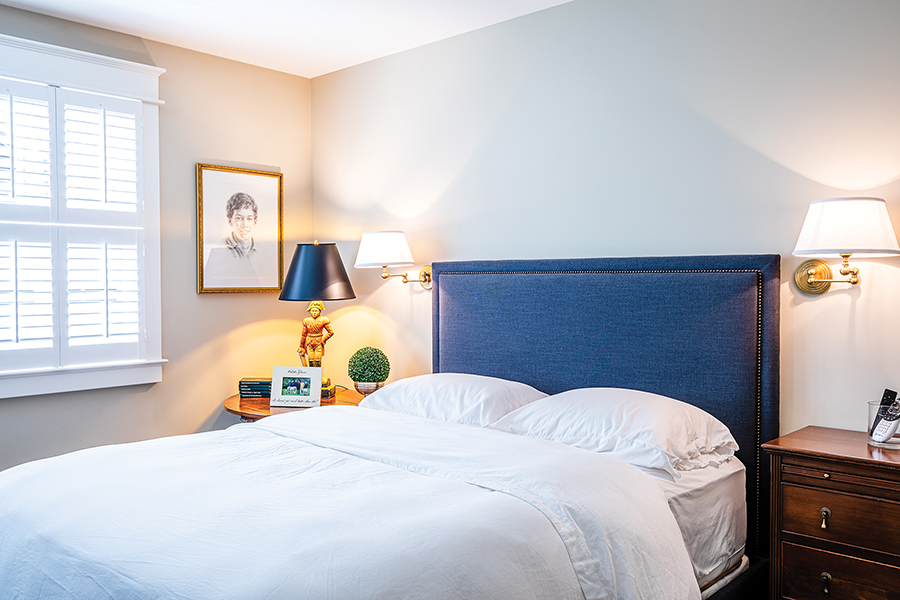 Kelly and Bill moved from St. Louis in 2018. A plaque on the fence announces their ownership: “House of Rader, established Dec. 10, 1988,” their wedding day.

“What I wanted was a gathering space for our family,” Bill says.

The cabin, now with five bedrooms and four bathrooms, is ready for Thanksgiving, when the Raders’ three adult children and other guests will number 22. At least 12 will bunk down at the cabin and the holiday feast will be there.