Blast from the Past

Out with the new! In with the old!

And now, for something completely different:

Two pianos, one a spinet, the other a concert-worthy grand by Mason & Hamlin, the craftsmen lauded by Rachmaninoff and Ravel. 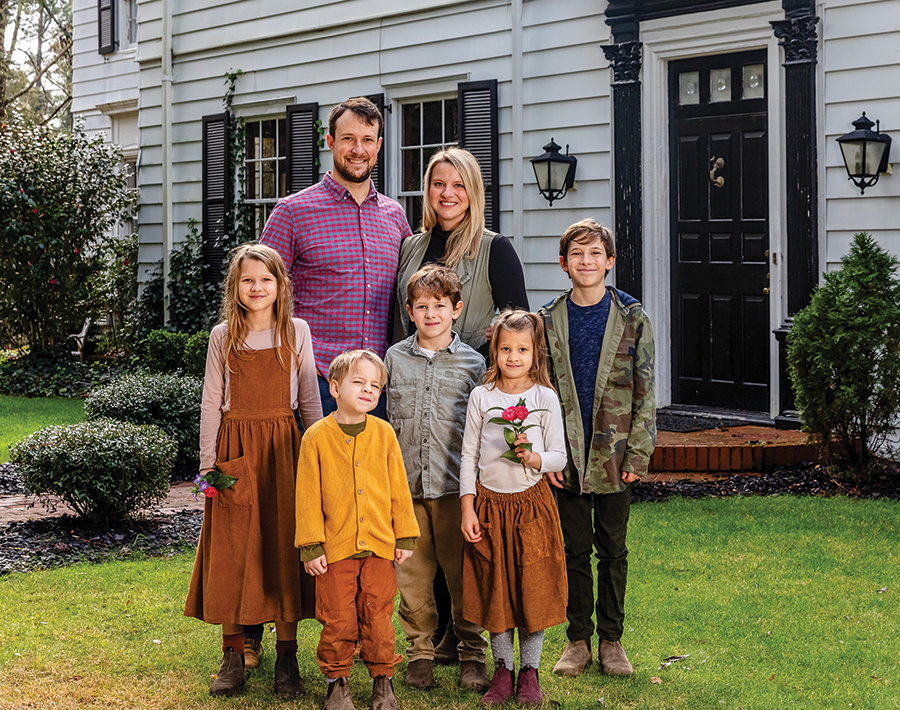 A home-school classroom with a skeleton in the corner, for teaching purposes.

A gazebo and two-tier treehouse.

Five fireplaces with carved mantels, no two the same.

An attic playroom only 7 feet shorter than a regulation bowling lane. 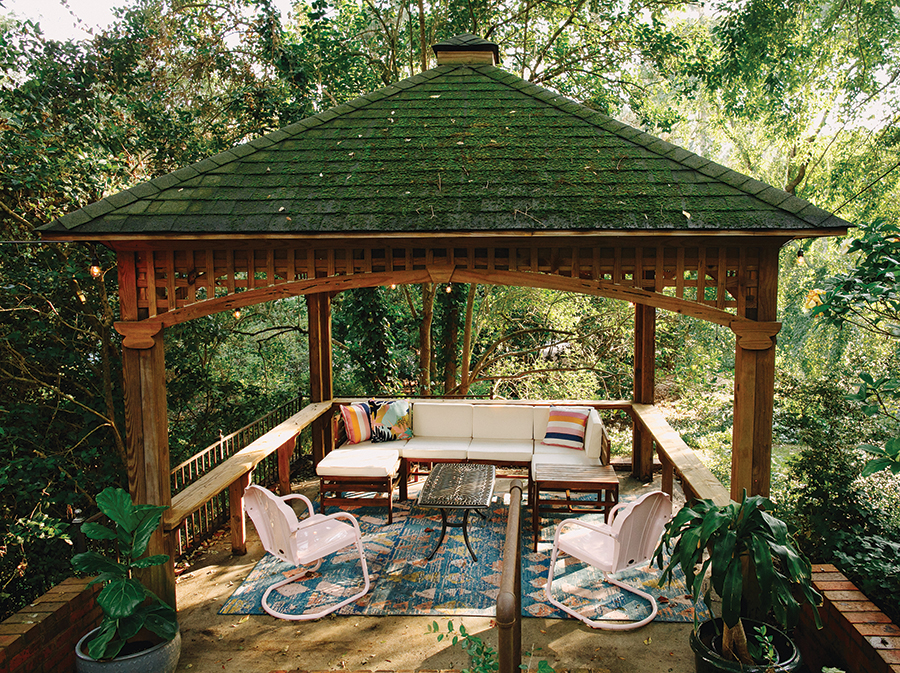 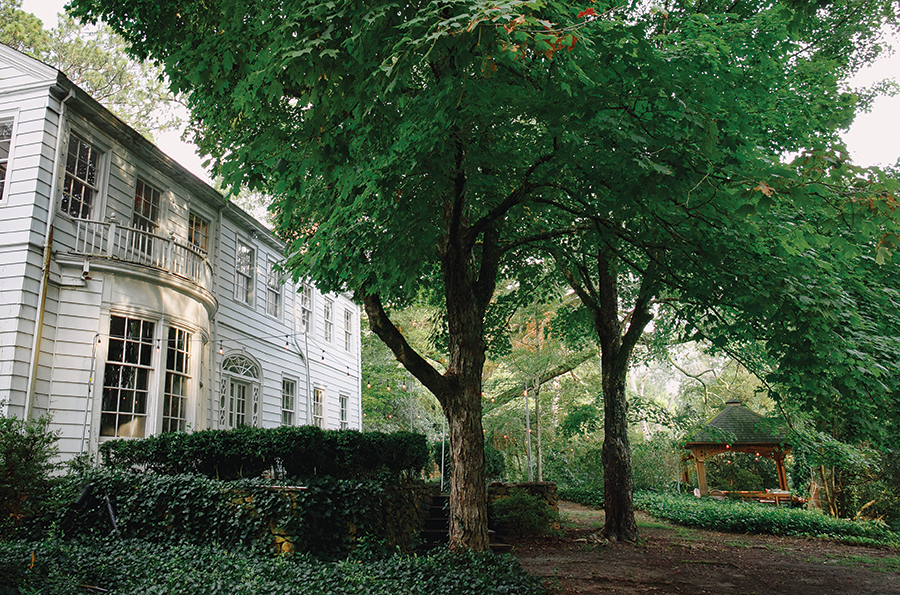 Obviously, a house this unusual reflects the family within: Nathan and Jacqueline Spearing and their children, Abel, Sophie, Eli, Aria and Jude. Their lifestyle follows religious tenets, as does their house, on occasion. The Spearings have hosted prayer meetings, an Easter egg hunt (2,000 eggs) and a sunrise service attended by 170 followed by brunch, without crowding. The house also showcases Nathan’s restoration business, Transform, N.C. Jacqueline, an accomplished classical pianist, fills the expanse with music.

Therefore, this home must be viewed through a different lens than neighboring renovations with altered floorplans, spa bathrooms, electronic gadgetry and High Point heirlooms. 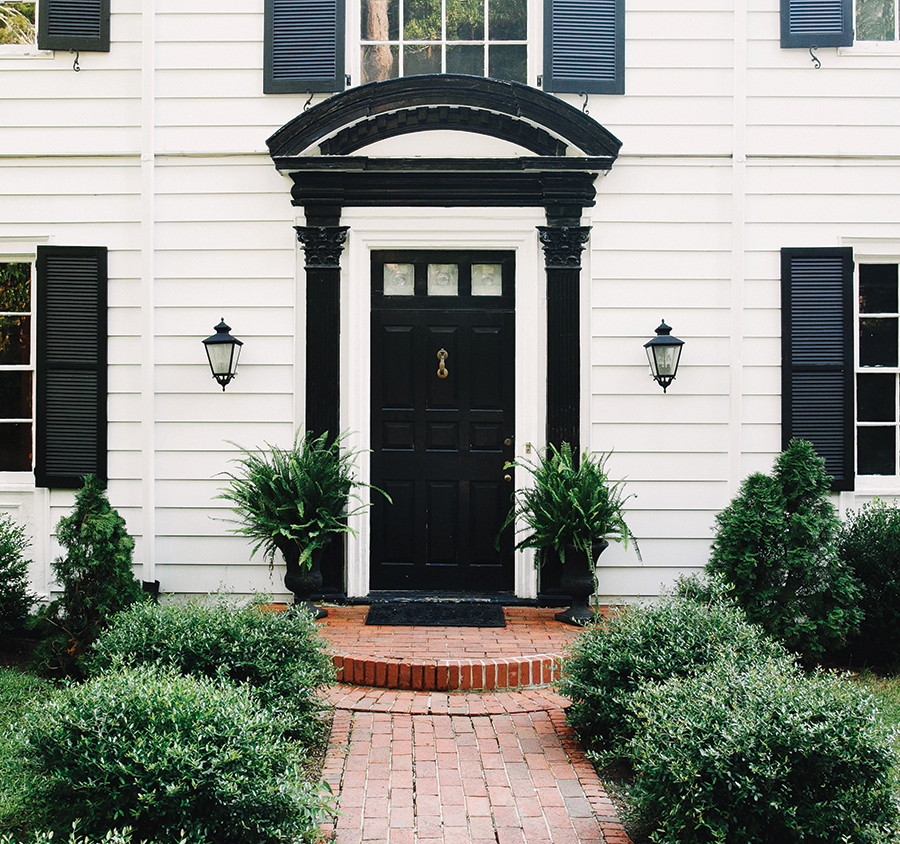 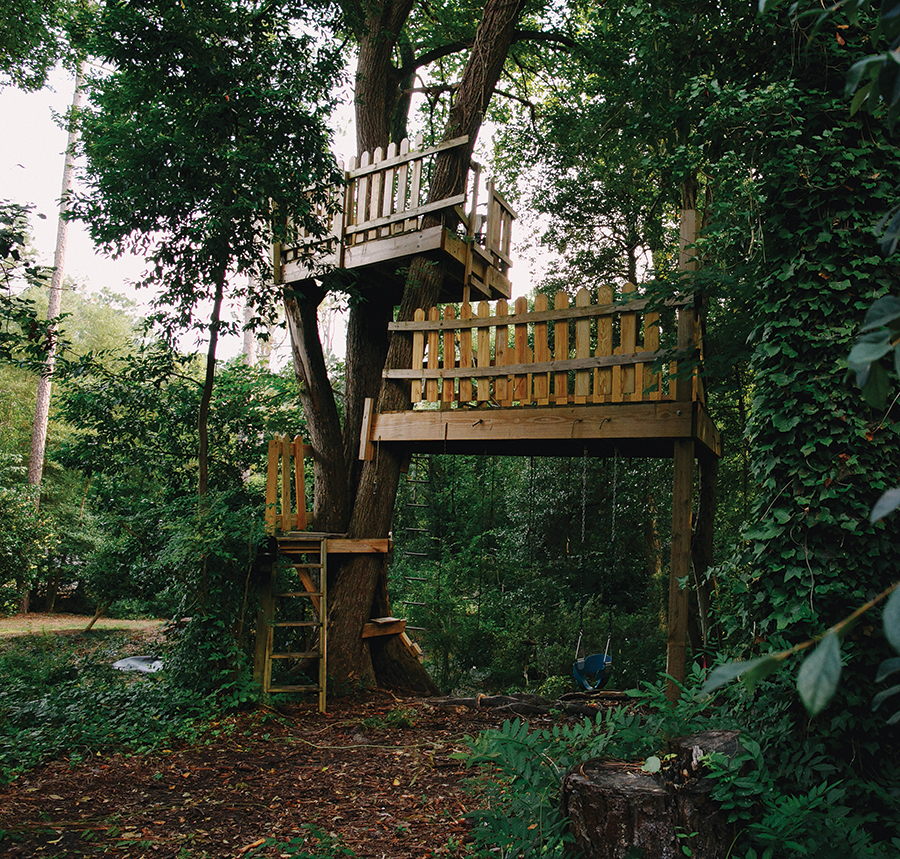 Nathan, from Alabama, has six siblings. Jacqueline, from Florida, has 10. Imagine the cousin count when the families gather for holidays.

Nathan’s mechanical aptitude blossomed while helping his father and grandfather with renovations and construction. He is conversant in many trades, eager to accept the challenges of plumbing, heating, carpentry or laying vintage tiles. When Nathan retired from Special Operations at Fort Bragg, the growing family gravitated to Moore County, where he purchased and renovated a 1400-square-foot cottage, circa 1918, in downtown Southern Pines.

Several more projects preceded Lansmyr. Their purpose, Jacqueline says, was to strike a balance: “We wanted modern living with the beautiful details that were worth preserving.”

“Each house has a story,” Nathan says. “When you work on a house as a tradesperson, you can see the craftsmanship.”

Jacqueline casts a designer’s eye. “The curved glass, the carvings, the transoms — you don’t find that in new homes.”

Occupying the house during renovations deepened the experience, especially at Lansmyr, where blue-blooded ghosts roam long halls with polished floors. 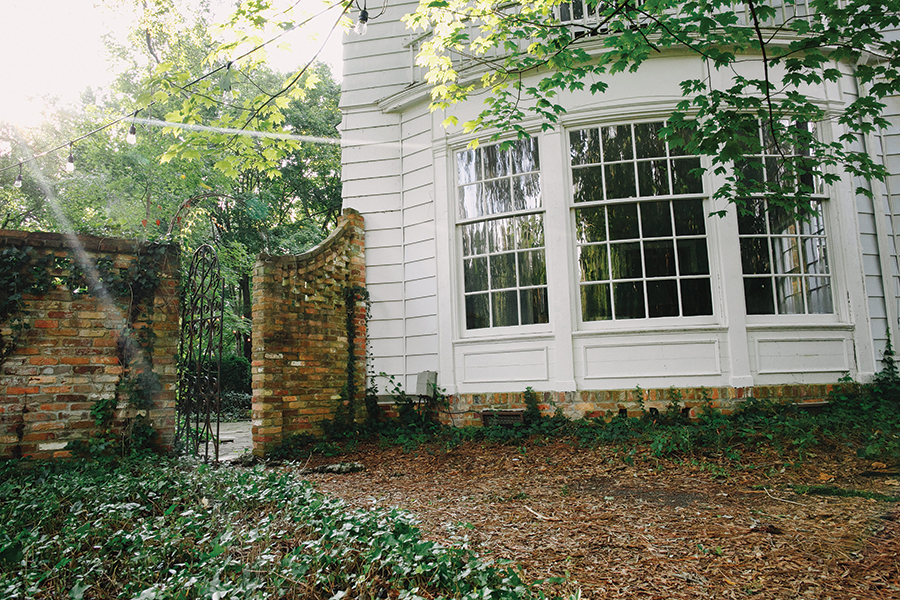 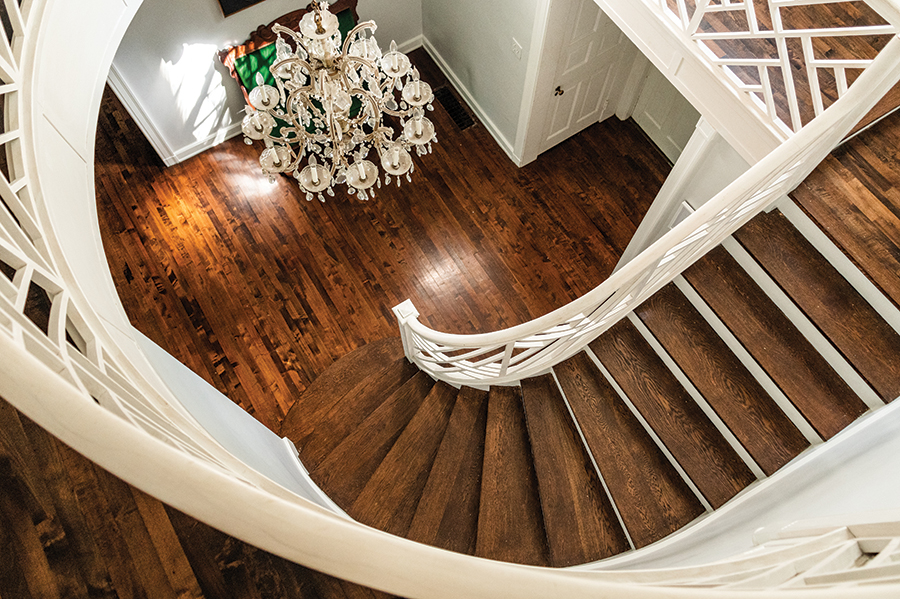 Chicago insurance magnet Lansing B. Warner discovered Pinehurst, then a chic winter resort, in the early 1930s, while visiting a stepson at the University of North Carolina-Chapel Hill. He appreciated the clientele, the social scene, and decided to build. Greensboro architect William Holleyman (responsible for the Cone Estate in Greensboro’s posh Irving Park) designed a Colonial Revival with Georgian details, including a Chippendale winding staircase and several areas with vaulted barrel ceilings.

When the announcement was made, the Pinehurst Outlook envisioned dancing in the streets with church bells ringing to celebrate the first substantial winter home construction since the beginning of the Great Depression. The house was completed in time for the 1934 “season.”

After Warner’s death in 1941, his wife sold Lansmyr to J. Stillman Rockefeller and his wife, the daughter of Andrew Carnegie II.

Imagine the name-brand guests entertained within these walls. 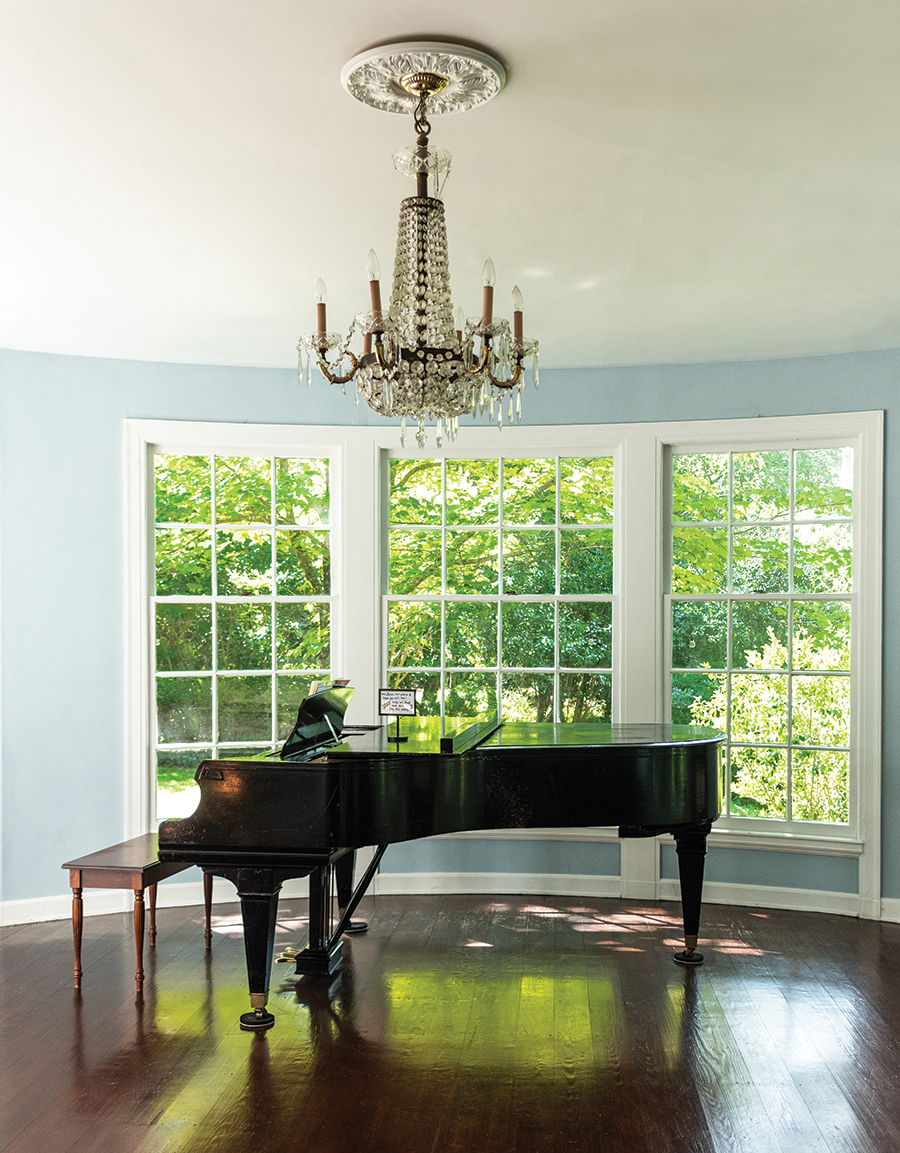 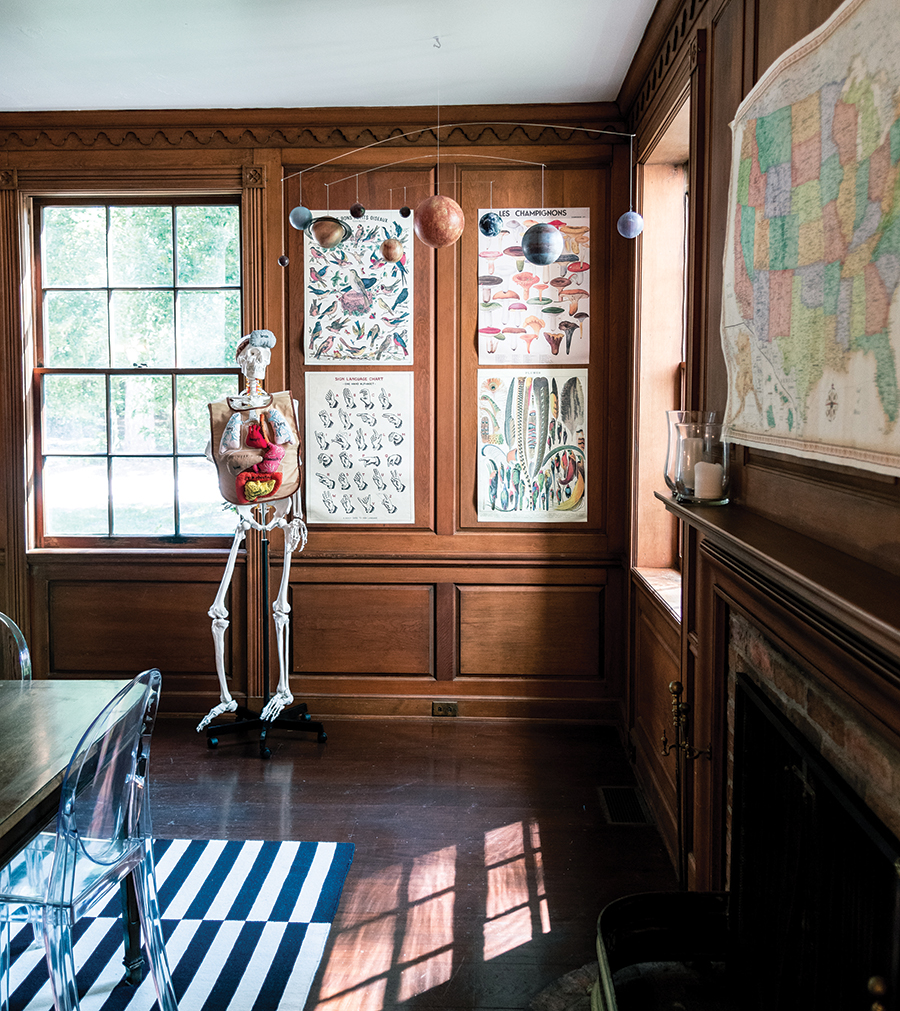 The bloom had faded when the Spearings purchased the house in 2016. Bones and plaster, still strong, but the guts (plumbing, wiring) had to go. “This is the best-built old house I’ve encountered,” Nathan says, because of the plethora of skilled labor available during the Depression. “This was my Ph.D. house. I knew what to do. I knew it would be our family home.”

The family moved in as work progressed, the children all bedding down in one finished room with fireplace near a functioning bathroom, then splitting up as other rooms were completed.

At this juncture, most renovationists — as opposed to restorationists — start moving walls. Not the Spearings, who, with minor exceptions, left both footprint and floorplan intact. This means a ground floor guest bedroom historically called “granny’s room” assuming an elder could not manage stairs; smallish bath and powder rooms; and a hall running the length of the longitudinal layout angling into a servants’ wing and three-car garage with chauffeur’s apartment.

These wings, some distance from the master suite and with modest rooms intended for the help, make ideal quarters for older children. Two of the Spearing boys share a room there; the other three children have singles.

But where are the toys, the dolls, the balls and games? In that long attic rec room with a TV where the children can watch videos and movies if they’re stuck inside.

“Our kids play and ride bikes outside,” Nathan says. 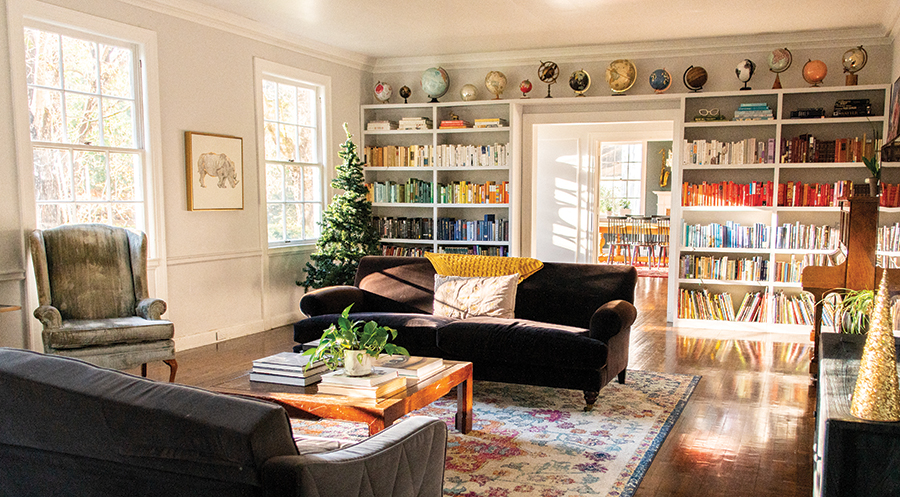 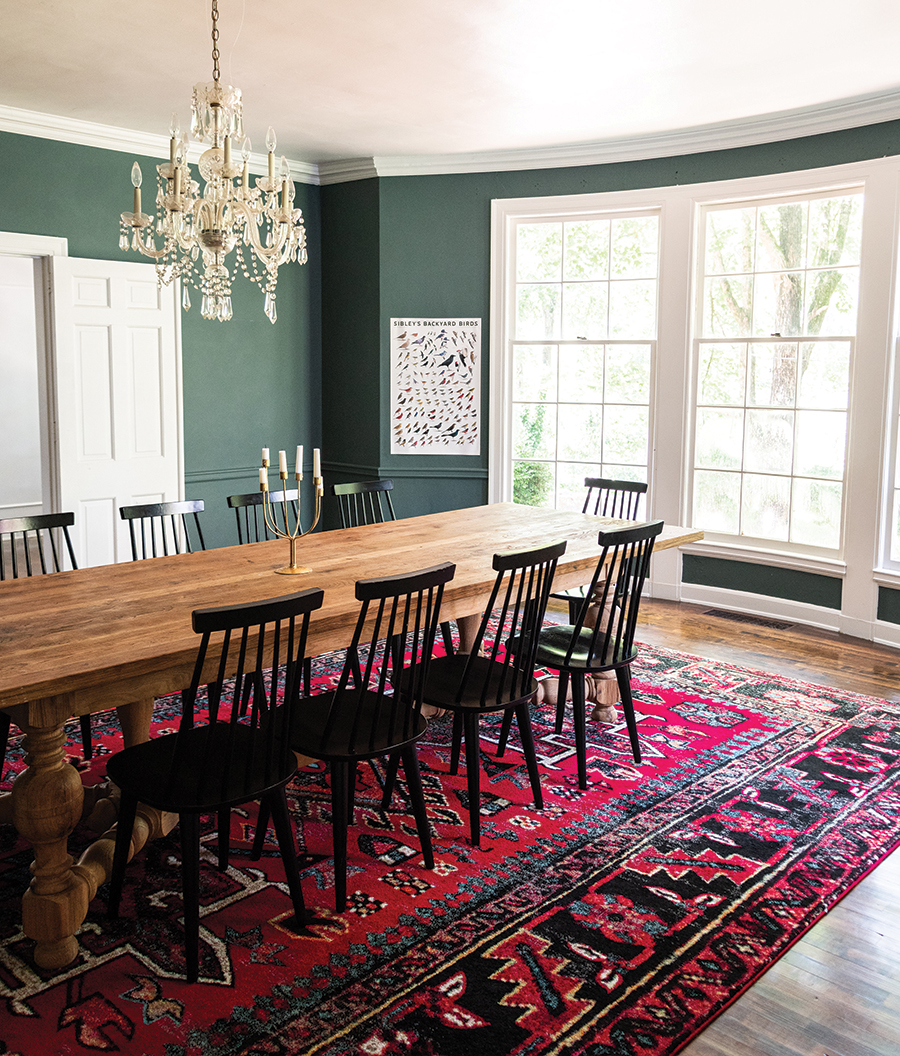 The Spearings’ strongest preservation statement remains the kitchen. In the luxury home market where dream kitchens clinch sales, this one hums retro. Not only have the tall carpenter-made glass-front cabinets remained intact, they have been repainted the eerie pale green of yesteryear, when the cook ruled the kitchen, not the chatelaine. Countertops were replaced but the porcelain sink and double drainboards stretching 10 feet survive. This layout forced the dishwasher into an elongated butler’s pantry which has another sink, intended perhaps for flower arranging.

Concession was made for a tea-coffee prep area, a European six-burner gas range and a tall refrigerator in sleek brushed metal.

“I thought an island would be convenient but . . . ” Jacqueline says. Instead, daytime meals are eaten at a free-standing modern table and chairs while the family gathers nightly in the dining room, at a 12-foot table with rough-hewn top and massive turned legs. The former servants’ dining room now serves as a pantry and utility space.

Furniture throughout is sparse but functional, including frigate-proportioned beds. A few pieces and artwork come from Jacqueline’s mother, but heirlooms aren’t plentiful in large families. 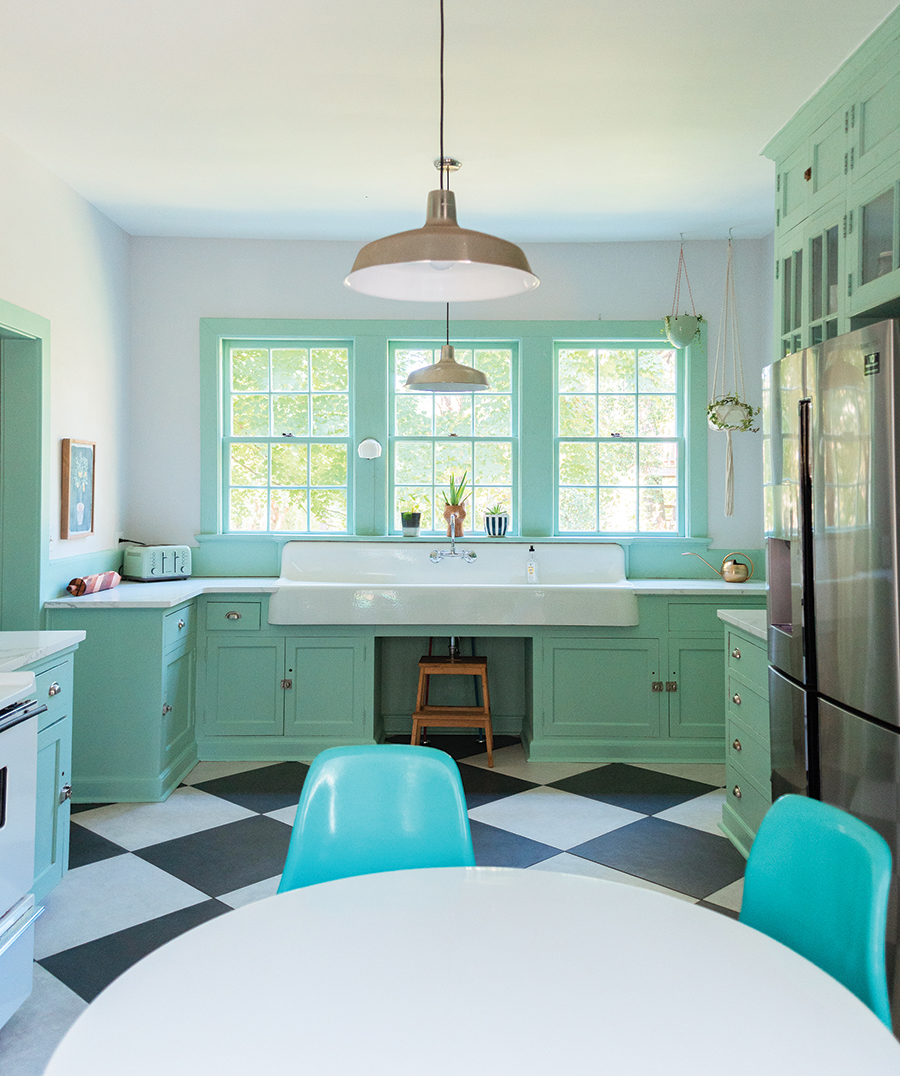 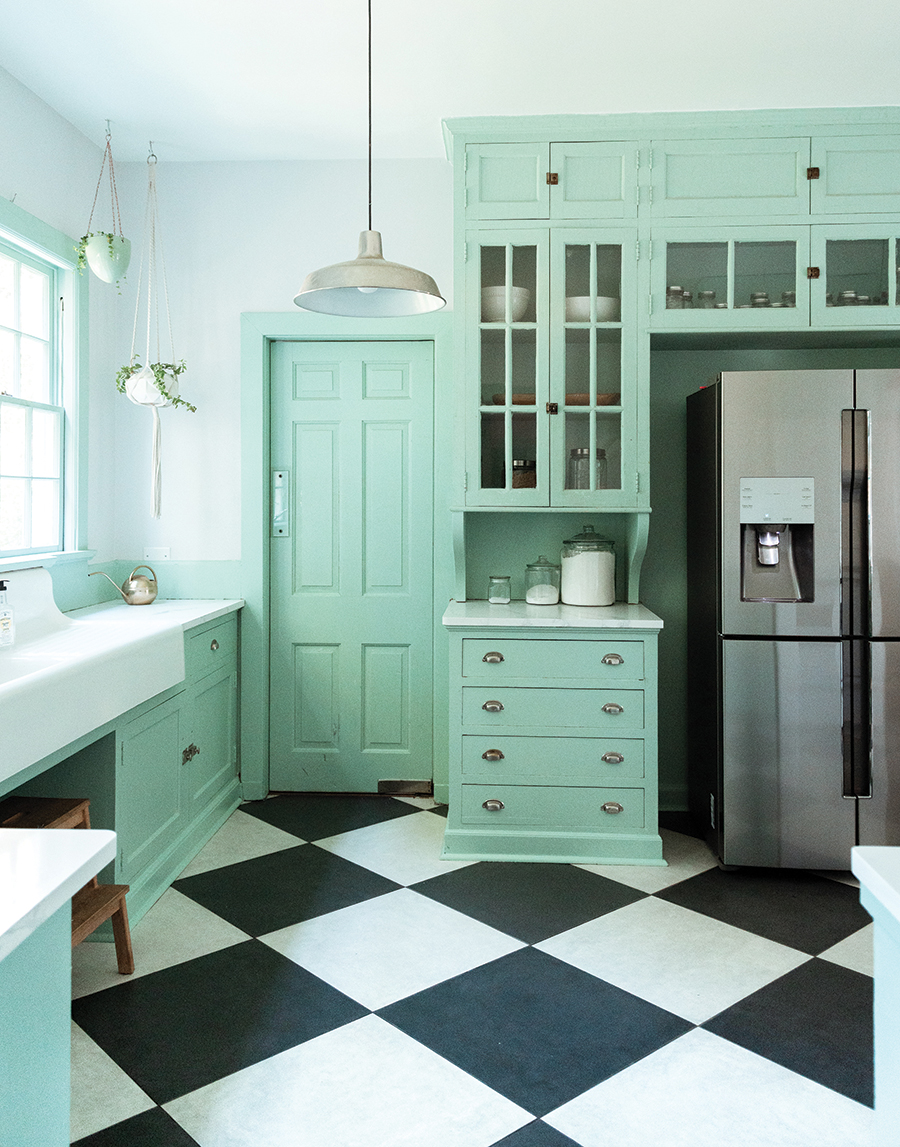 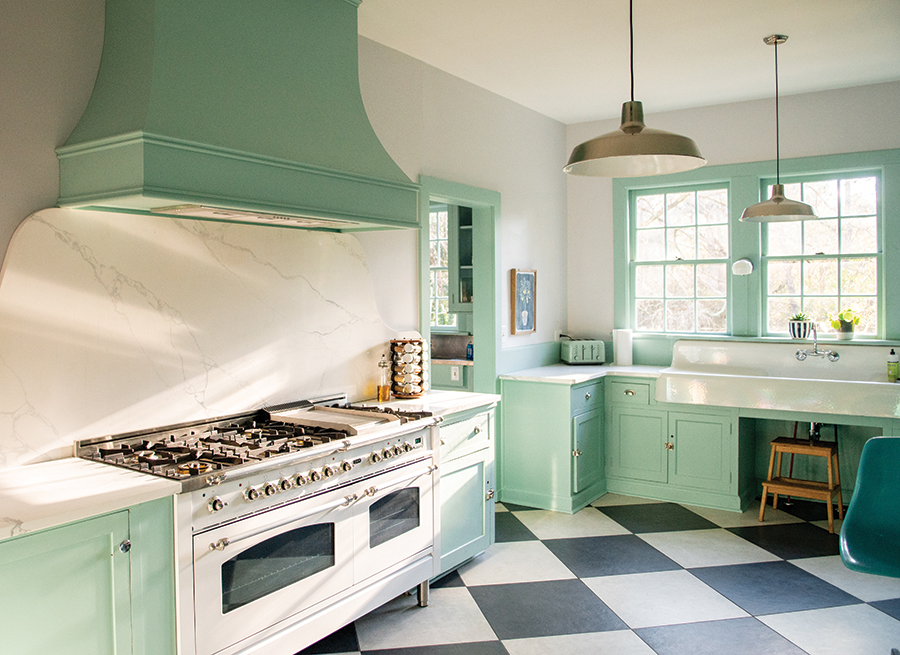 The couple’s palette veers from traditional pastels, substituting a variety of greens — from money-hued to swamp to lemon-lime — using a British paint with dense pigment and a velvety matte finish. Charcoal grey appears, even a daring mauve bedroom adjacent to a purple bathroom. Nathan learned that dark colors suit larger rooms, as well as highlighting trim. Window treatments are few, partly because the Spearings love natural light, also because the children discovered swinging on the drapes. Area rugs splash multi-colors and abstract designs over stained wood. Nathan built a wall of bookcases in the living room where the top shelf houses Jacqueline’s collection of globes.

The overall effect: vast, from the grand piano filling a bowed window in a sunroom large enough for a recital to two acres of enchanted forest where siblings play, instead of watching TV; uncluttered; bright. Lansmyr is playbook for opposing lifestyles: first opulent, maintained by servants; now a family-oriented retreat from worldly distractions.

“When I left the military we could have moved anywhere,” Nathan says, “but we love this community. Most important, we have a lot of people here that we love in the military and church communities. This is where we want to put down roots.”

Or, as his motto proclaims: “Still livin’ the dream.”  PS 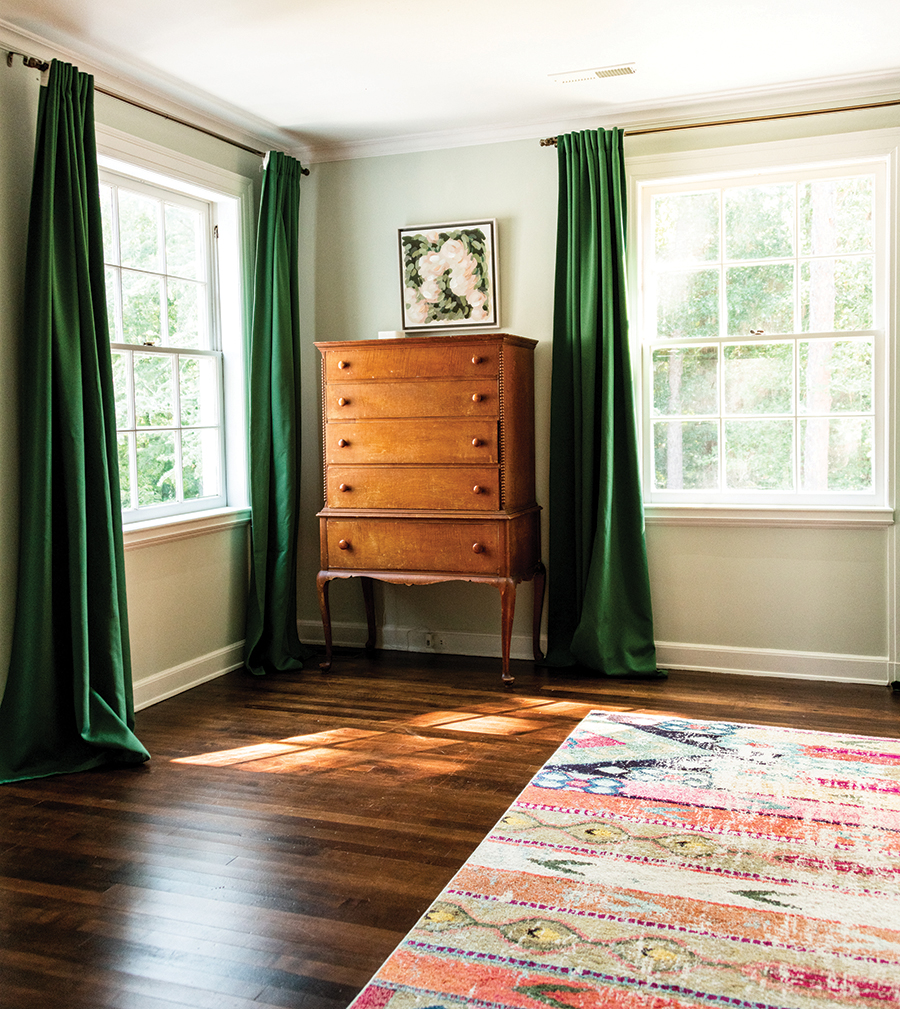 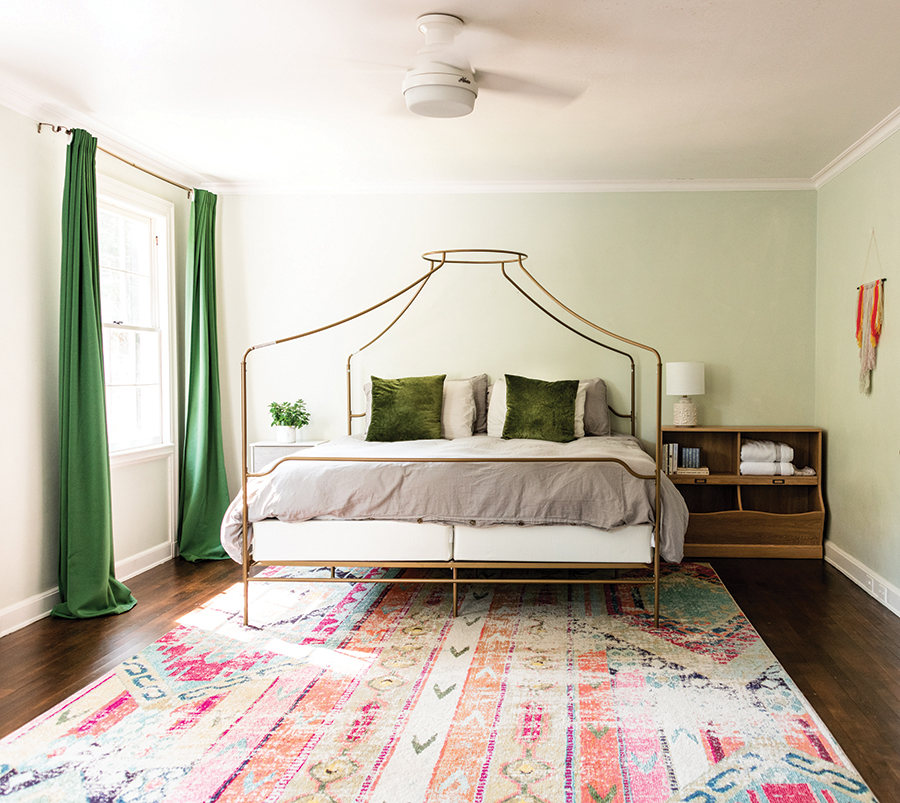 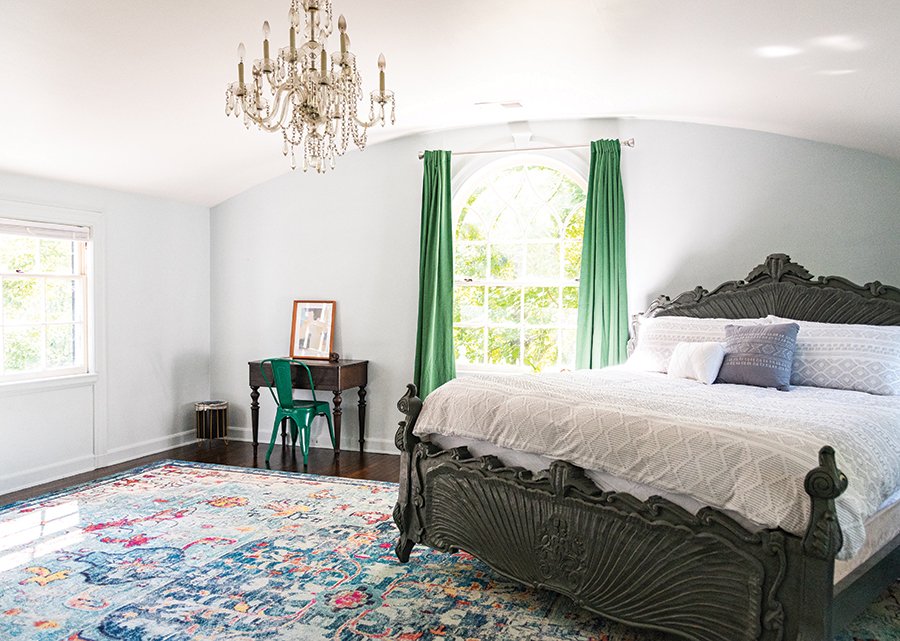