The changing plumage of the American goldfinch

It is that time of the year again: calls and emails asking what the nondescript little light-brown birds might be that are suddenly flocking to seed feeders. Believe it or not, they are actually our familiar American goldfinches.

Goldfinches are not migratory, but they do engage in a disappearing act of sorts. This species is one of scores that lose their breeding colors in late summer and take on a muted plumage for the colder months of the year. We think this is simply a matter of being camouflaged during months when life is more challenging and breeding finery is unnecessary. From October through April these birds have no need for bright colors. As we get into February, you may begin to see some splotchy yellowish individuals as the increase in the length of daylight hours triggers the hormones responsible for feather molt.

Bright yellow male goldfinches are easy to identify, sporting black wings and a black topknot. The females, however, are a muted yellow; no doubt a better camouflage while incubating in dense shrubby cover. The female goldfinches take care of early nesting duties but may abandon the young a week or so after hatching to the males’ care, especially if the eggs were laid early in the period. She will then search out a new mate and hurriedly begin a second brood before the shorter days of early fall arrive. 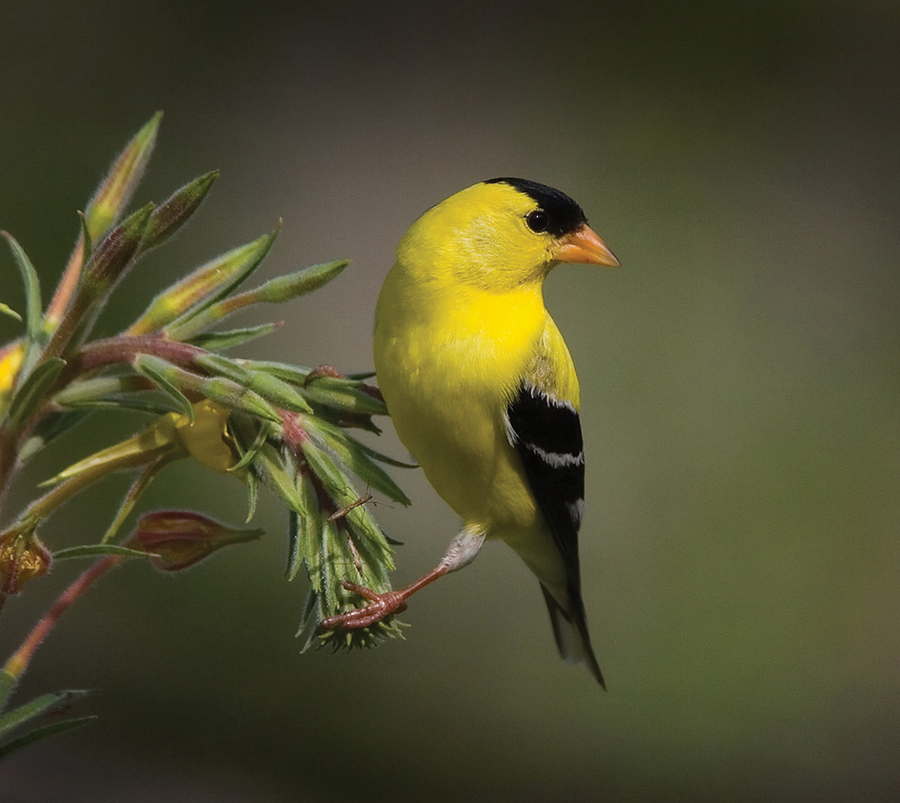 It will not be until summer winds sweep down across the Piedmont and Sandhills that the family life of this eye-catching species will finally hit high gear. Then it will be time for American goldfinches to begin raising a family. They breed much later than other songbirds, producing one and in some cases two sets of young from mid-August to late September. The delay in breeding is likely related to the fact that they feed exclusively on small seeds. It is then that grasses and other herbaceous vegetation are finally producing an abundance of seed. Food for a growing family has finally become plentiful. It is also not until late summer that the pods of native thistle have burst open and, in addition to the energy-rich seeds being exposed, the down is also available as nesting material. Males may have been singing their melodious song from the treetops since May.  Any associating pairs have simply been loafing, waiting for the time to be right to get down to business.

Goldfinches have a very large range nationwide and can actually be found across our state year round. They are highly nomadic during the cooler months and tend to flock together in search of food. In early February, they are very numerous at bird feeders. In some years, when the native seed sources are depleted or scarce, hundreds may be found taking advantage of sunflower hearts or nyger thistle seed. However, their winter plumage is once again very drab. Males and females alike are a dull brown and, as a result, often cause a good bit of confusion for backyard bird enthusiasts. If there is any doubt, their frequent “potato chip” call always gives them away.  PS

Susan would love to hear from you. Send wildlife sightings and photos to susan@ncaves.com.