Art in the Woods

Sculpture grows in a Seagrove garden

If you happen to be an artist trying to shop around a work that is roughly the size and weight of a walk-in freezer, your choices might be, let’s say, limited. Hauling it from one autumn craft show to another would present absurdly daunting logistical challenges, and this hypothetical Bacchus in a Box may well not fit through the front door of that cute little gallery in the theater district that represents you. So, what’s a sculptor to do?

One option is the sculpture garden at Carolina Bronze, the artists’ foundry in the backwoods of Randolph County, down a gravel drive off Maple Springs Road on the opposite side of Hwy. 220/Interstate 74 from Seagrove, the ground zero of North Carolina pottery. Just because Carolina Bronze is off the beaten path doesn’t mean artists don’t beat a path there. Internationally renowned sculptors like Charlotte’s Chas Fagan have the castings of their work poured there. The sculpture garden is a natural offshoot of the business founded in 1995 by Ed Walker, a sculptor himself, and his wife, Melissa, both products of East Carolina University’s art program.

“It’s all a work in progress,” says Melissa of this weekend project, years in the making. “We keep doing a little bit here and there.”

While the simple, rough-hewn path around a pond will never be mistaken for the manicured gardens of the palace at Versailles, it features the art of 25, plus or minus, artists. Melissa is populating the landscape with native North Carolina plants like cardinal flower and Jack-in-the-pulpit. Just like a museum tour, using your cellphone, it’s possible to download an app from the Carolina Bronze website that identifies and discusses the art and the various species of plants when you click on the corresponding number. 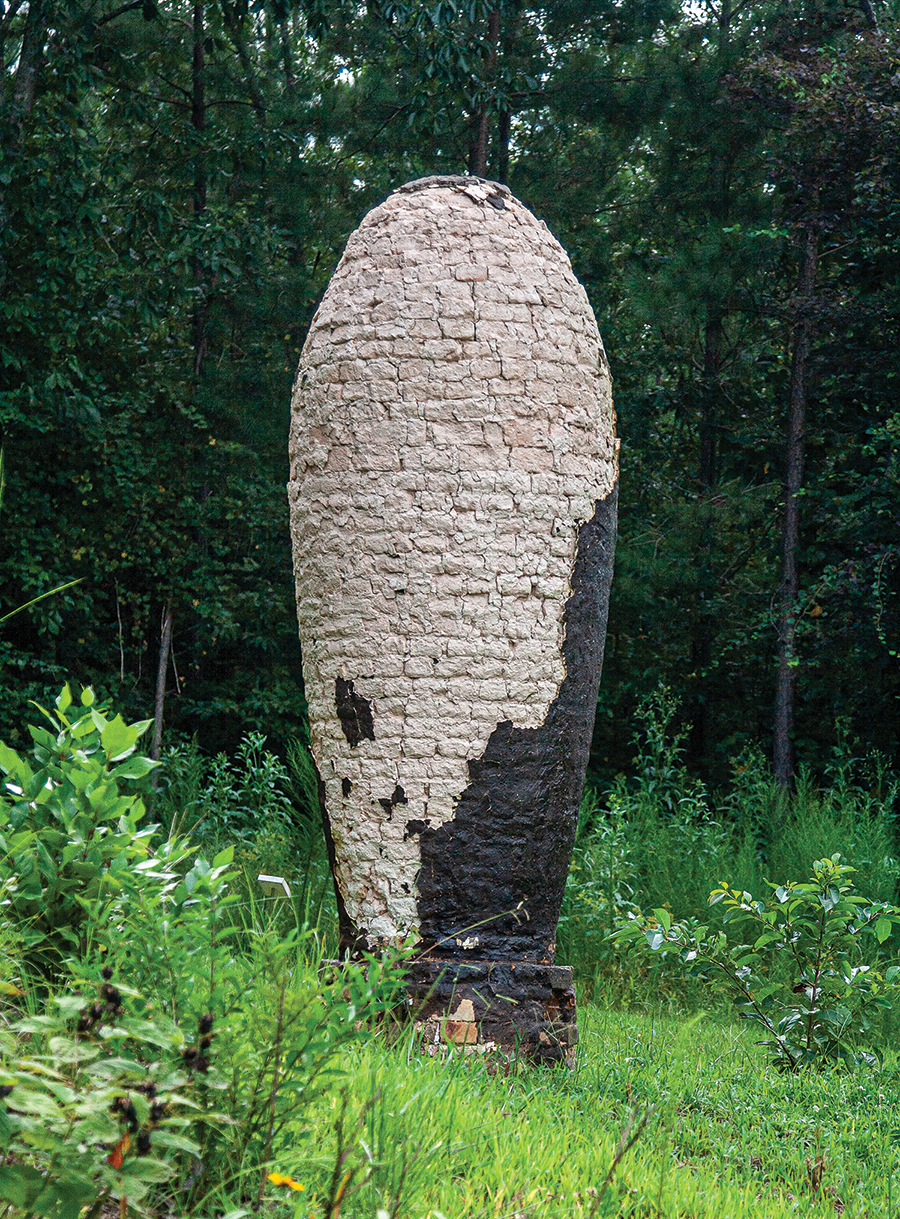 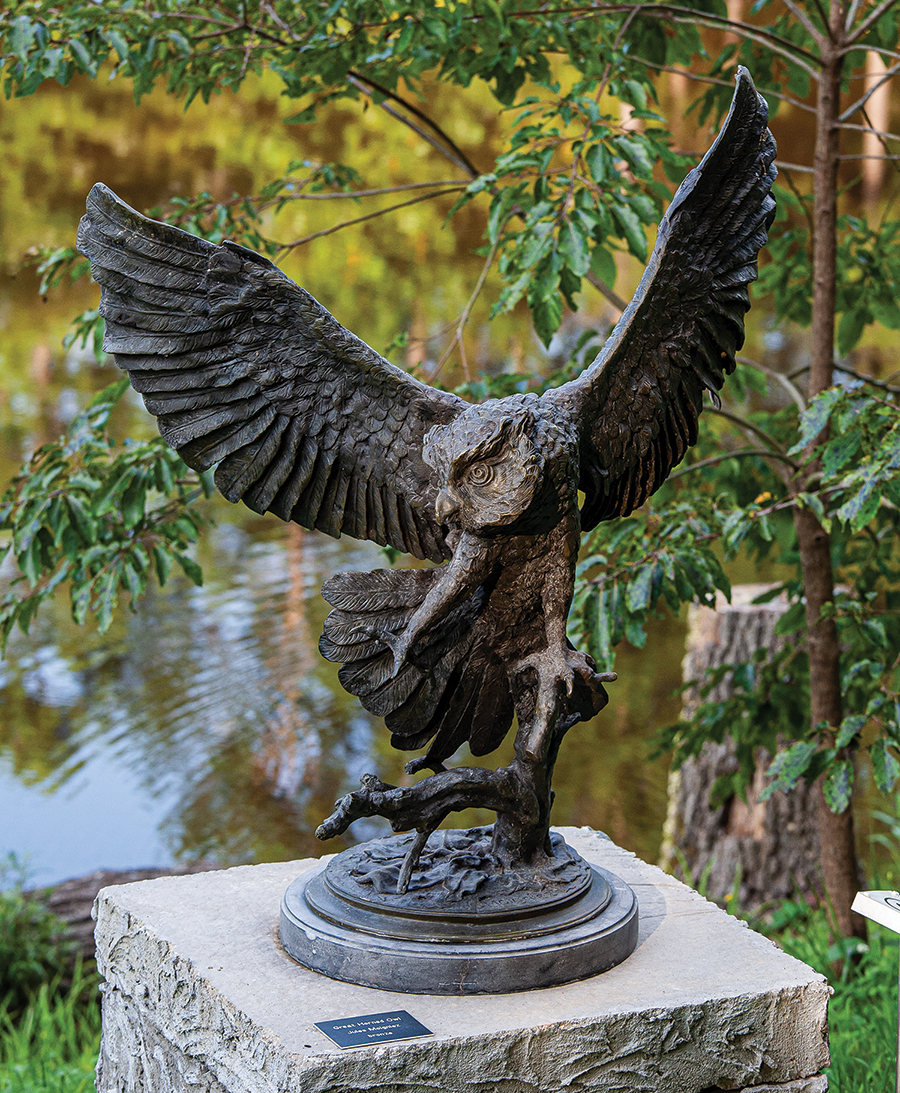 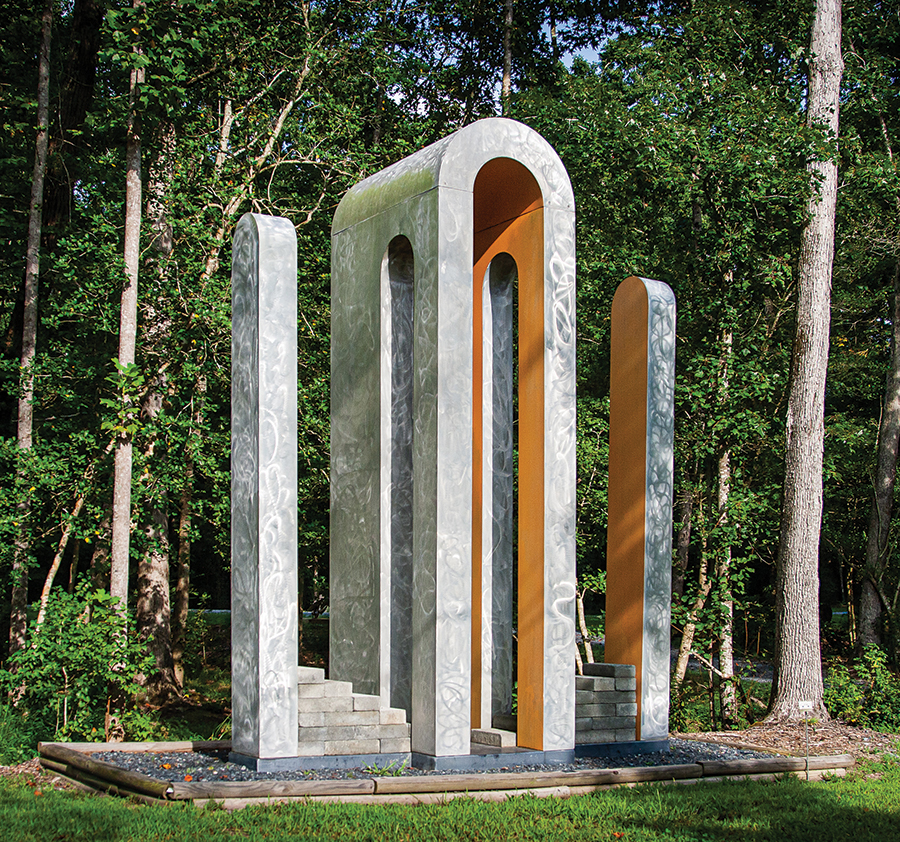 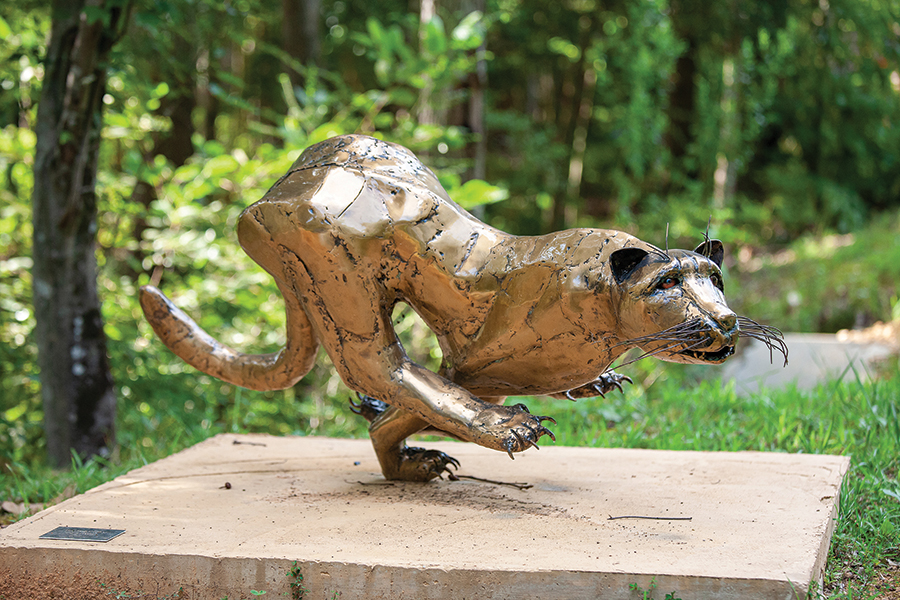 Ed’s dream also includes a heliport for prospective clients. If that seems wildly far-fetched, it wasn’t that long ago that they were trying to figure out a way for Nancy Reagan to fly in to preview one of Fagan’s sculptures of her husband, the 40th president of the United States — a trip that was eclipsed by Ronald Reagan’s illness.

Jim Galluci, well known in Greensboro and beyond for his “gates” sculptures, is one of the artists represented in the garden with his piece Temple. “Well, I guess you can say when you show sculpture in the darnedest places, the darnedest people enjoy it,” says Galluci, who recently began fabrication work on an entryway project for the South County Regional Library in Charlotte. The work will include 18 sheets of aluminum fitted to look like the pages of a book, complete with titles and authors’ names.

“I really have a philosophy that the beauty of public art is you can go places where it’s never been before, open doors that have never been opened before, and get people interested that never, ever saw art before — and that’s a good purpose for public art,” says Galluci, who became intrigued with gates as an artistic leitmotif during a 1986 project. “I was shortlisted for a Holocaust memorial, and I designed a set of gates that would have survivors of the Holocaust press their hands in the foundry sand and molten bronze be spread on top of that and that would create the panels of the gates and the doorway. It was called Witness Gates.”

He didn’t get the commission, but he kept the concept. “If you have a good idea, it’s still a good idea,” he says. “Gates really hold kind of universal truths, like right now. Is the door open or closed? COVID closed; COVID open.”

Richard Pitts, who has a studio in New York and another in Pennsylvania’s Endless Mountains an hour or so south of New York’s Finger Lakes, is another of the artists on exhibit on the little path around the pond. He has two pieces, Holy Smoke and Candle. “That bronze foundry is in the middle of nowhere, but I think a sculpture can make a place important, until the place makes the sculpture important. I think that’s the kind of dialogue that happens sort of naturally,” says Pitts. “To show sculpture outside is very important. It creates the landscape as much as the landscape creates it.” 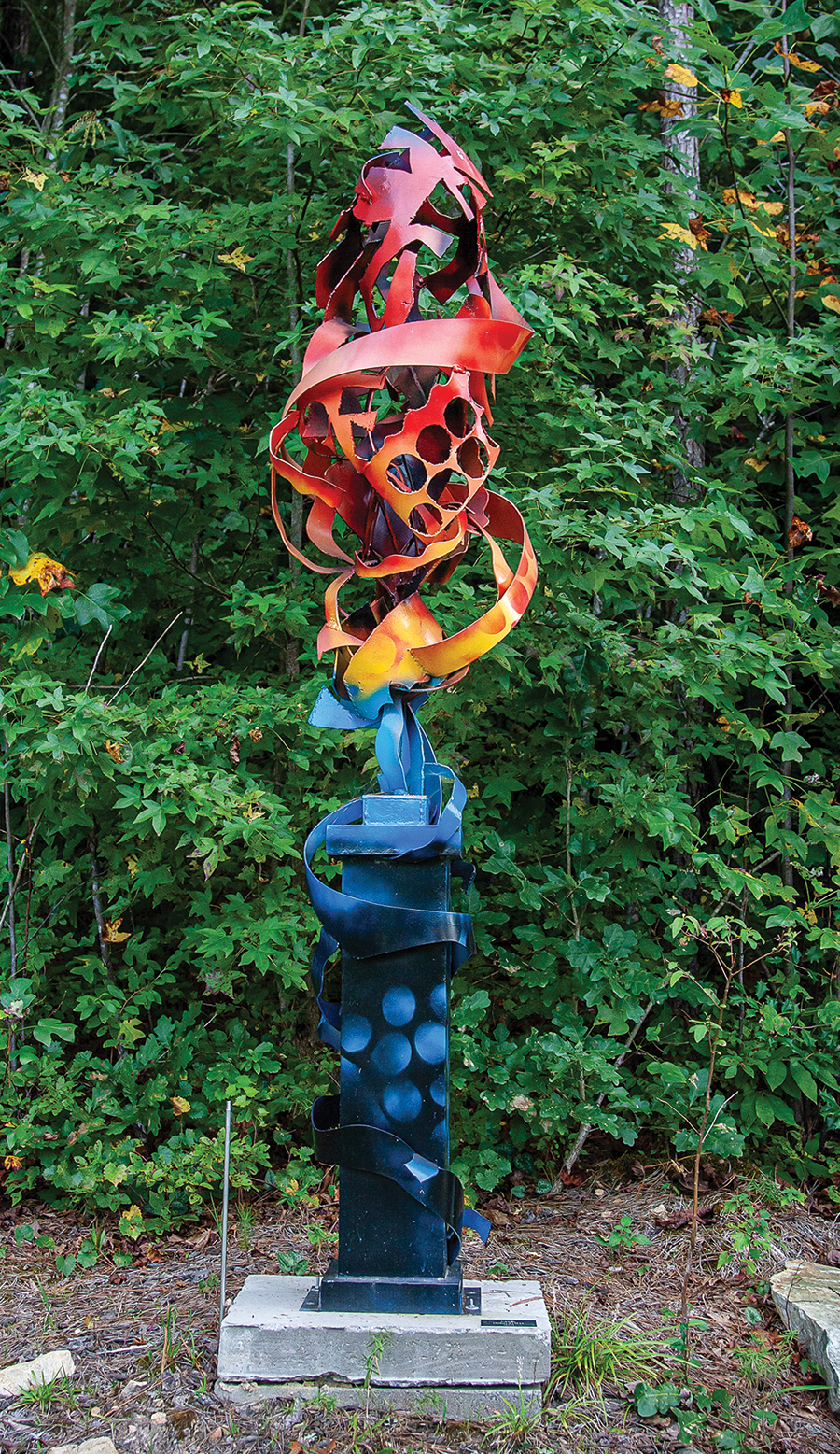 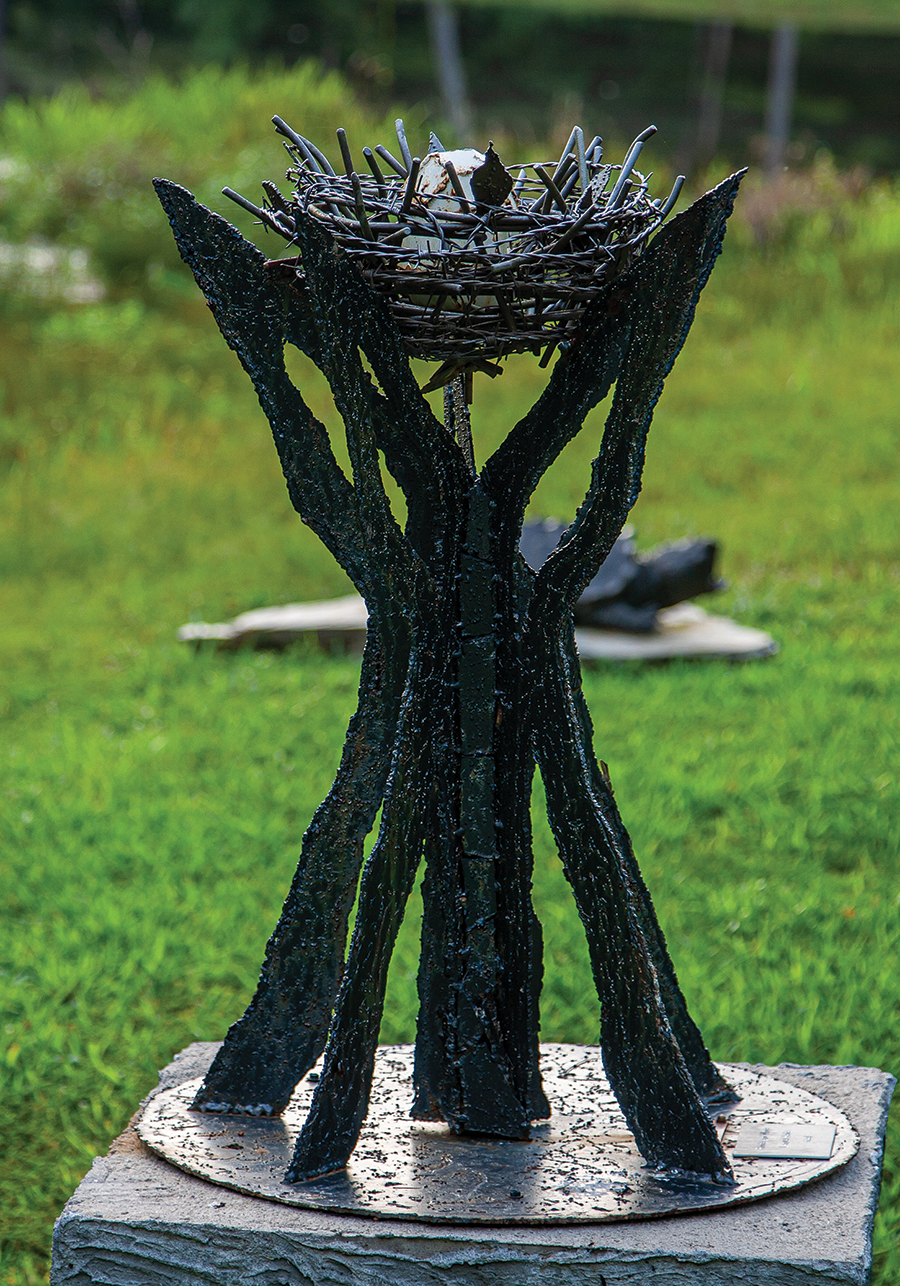 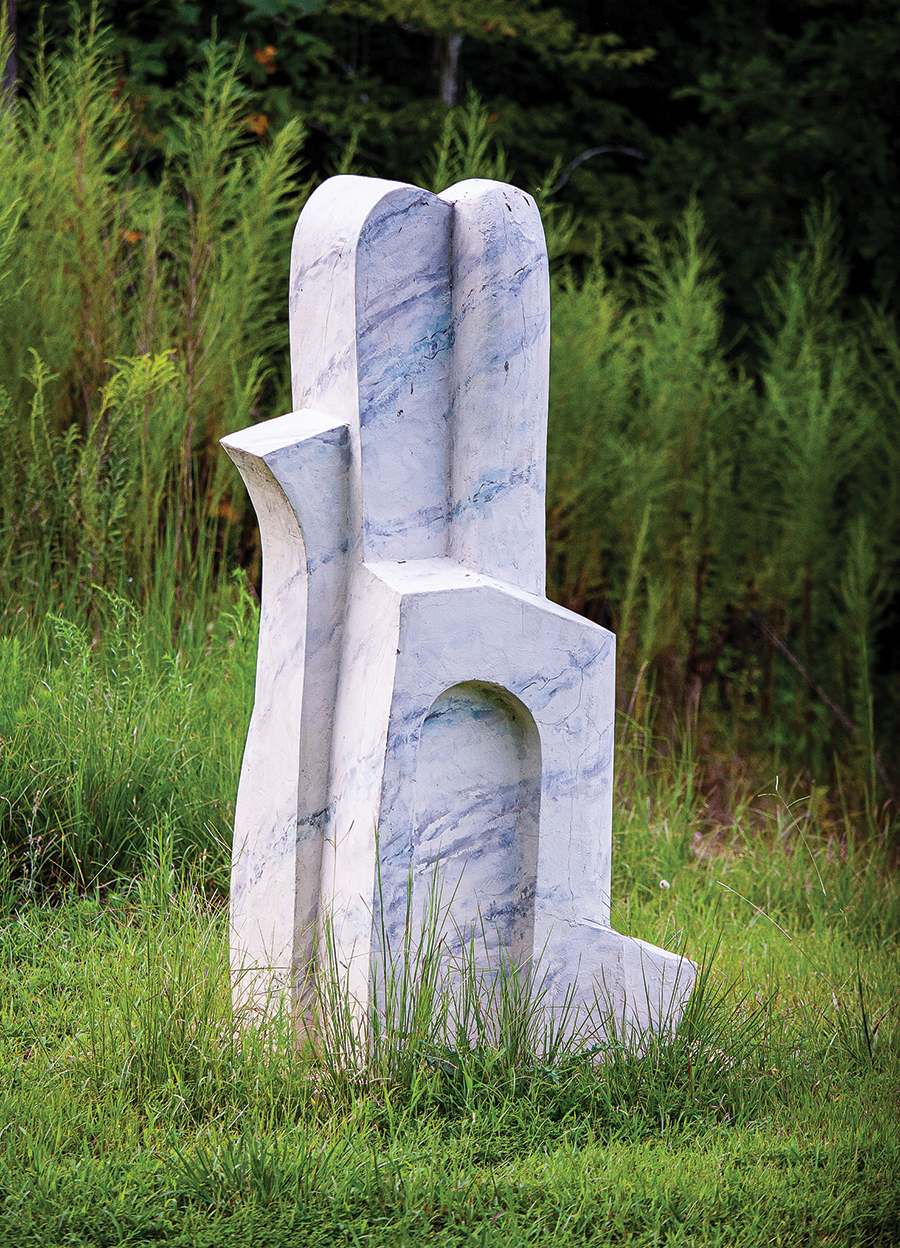 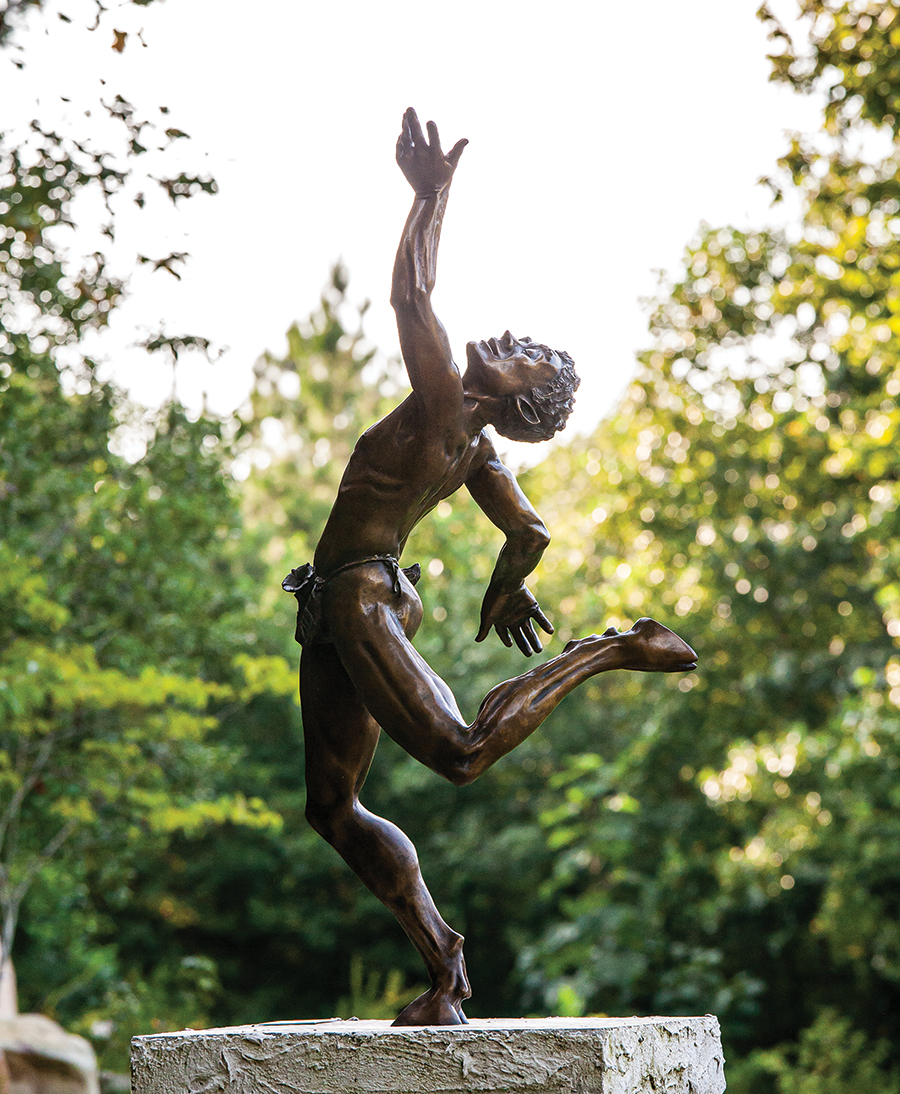 The piece titled Candle was hand-painted, distinct from a commercial process he frequently uses now. “It was sort of a natural evolution of some of the hand-painted three-dimensional objects I was making indoors,” says Pitts. “My pieces are all hand-fabricated, and there’s a kind of spontaneity that I enjoy about making decisions and revisions as I go along. To me that’s an important part of the creative process.”

While most of the sculptures in the garden tend toward the abstract, Larry Bechtel’s more representational bronze Rapture occupies a singular space. “I did the original piece, on a small scale — about 12 inches — for a private collector in Charlottesville,” says Bechtel. “He had a beautiful garden and a pond, and he was looking for something to go there. He asked me to come up with an idea, which I did, a total blissed-out rapture. In some respects I’ve tried to do that in other works but that one really hit it just right.”

Bechtel, who taught English at Virginia Tech for seven years, is completing the third volume of “The Tinsmith’s Apprentice,” a trilogy of books centering on Isaac Granger, one of Thomas Jefferson’s slaves. It was a story he came across when he was researching Jefferson for a sculpture project for the Darden School of Business at the University of Virginia.

“I ran across a little book about Isaac Granger that included a very riveting picture of him. I did up this portrait bust of Isaac and eventually had it cast for a fellow in Virginia Beach. But the story stuck with me. In a sort of memoir dictated in the 1840s, Isaac talks about a time when he was a young man and he was taken to Philadelphia by Jefferson to be apprenticed to a tinsmith. I just began thinking about what it must have been like for a young man, enslaved on a Southern plantation, to be taken up to the largest city in the country, the capital, founded by Quakers, living in a household with other apprentices and a Quaker family. This had to be a mind-blowing experience. That was what I started with. It’s gone on from there.”

Ed Walker has several of his own sculptures gracing the grounds of Carolina Bronze. Some of the other artists represented include Norman Keller (a former professor at ECU); Kim Goh; Bill Donnan (also an ECU grad); the late Bob Edmiston; the Seagrove potter Daniel Johnston; former neurosurgeon Ed Byrd; a French artist whose 19th century work the Walkers personally acquired, Jules Moigniez; and more.

The peace of the pond and the path can be disturbed from time to time by groups of school kids touring the foundry (pre-coronavirus) or perhaps the pop-pop of neighbors hunting in the distant woods — or maybe the occasional curious stranger just hunting for art.  PS

Jim Moriarty is the Senior Editor of PineStraw and can be reached at jjmpinestraw@gmail.com. 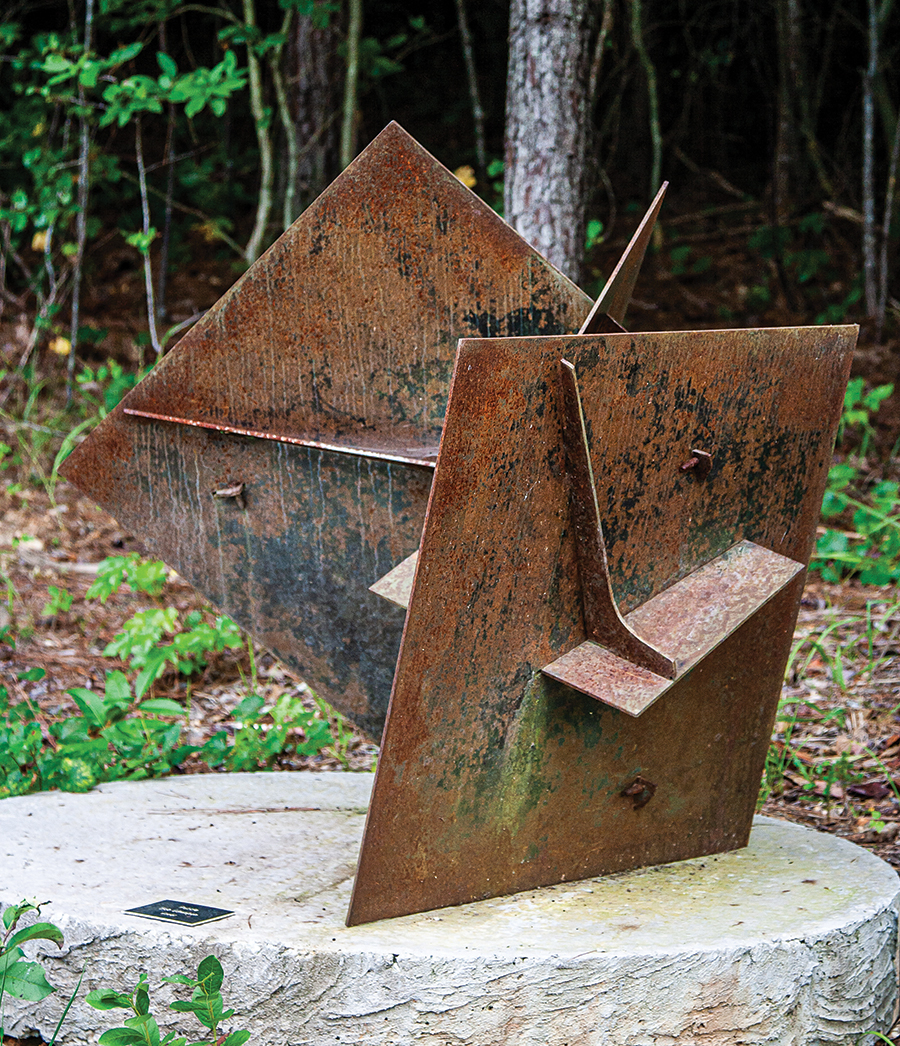 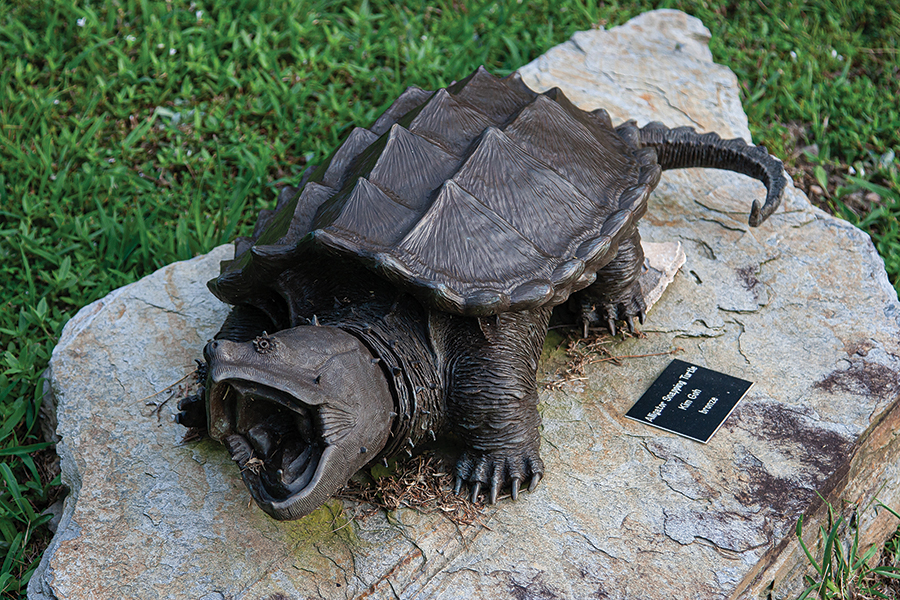