A cozy family home doubles as a gallery for animal behaviorist

A sandy, rutted, quarter-mile driveway off Pee Dee Road ends at a white clapboard house with enough wings to take flight. Its front yard is a grass pasture sized for soccer, or football, or equestrian trials. Somewhere on the 150-acre estate are remnants of a tennis court. Yet the exterior suggests a family home, more comfy than pretentious, despite its 6,000-square-foot interior.

The sign by the front porch reads Whitehall — not for London’s government center, but because the man who built it during the development of Knollwood in the 1920s was named White, or Whitehouse.

One legend has this wealthy New Yorker losing his fortune in the 1929 stock market crash — and committing suicide. 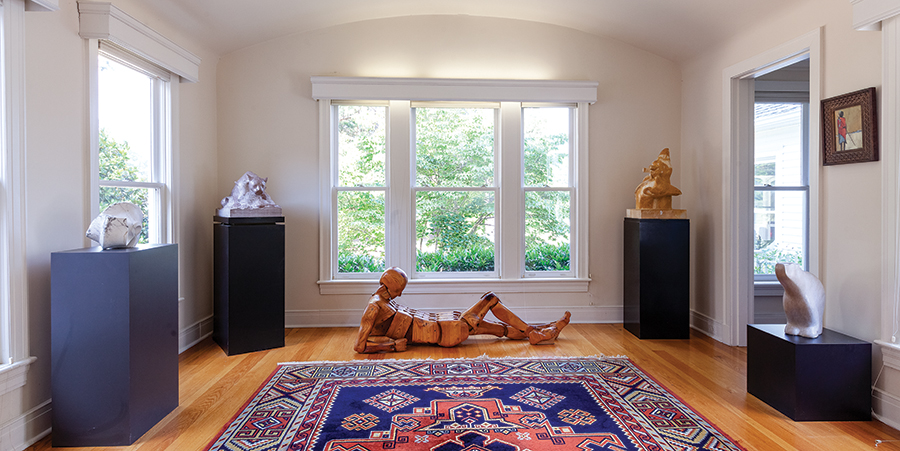 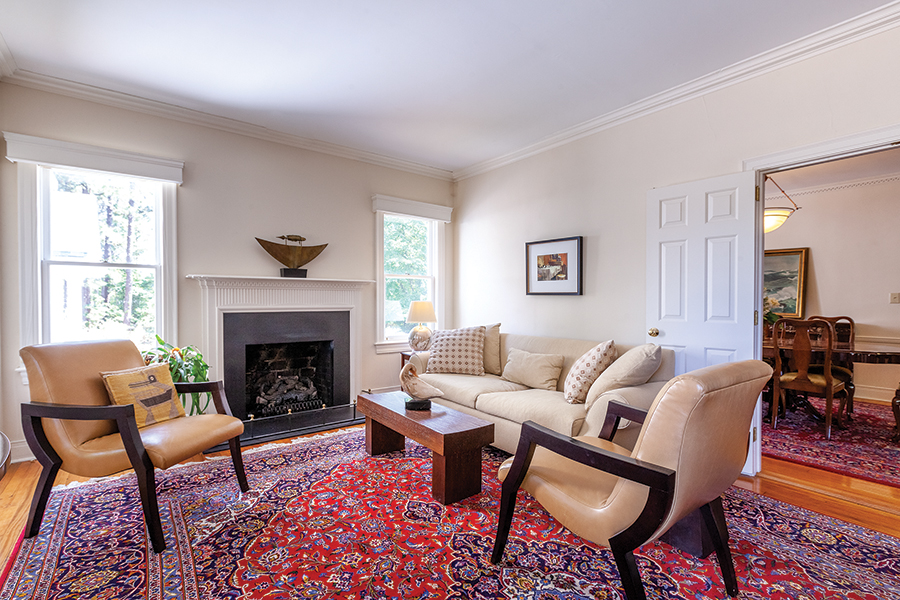 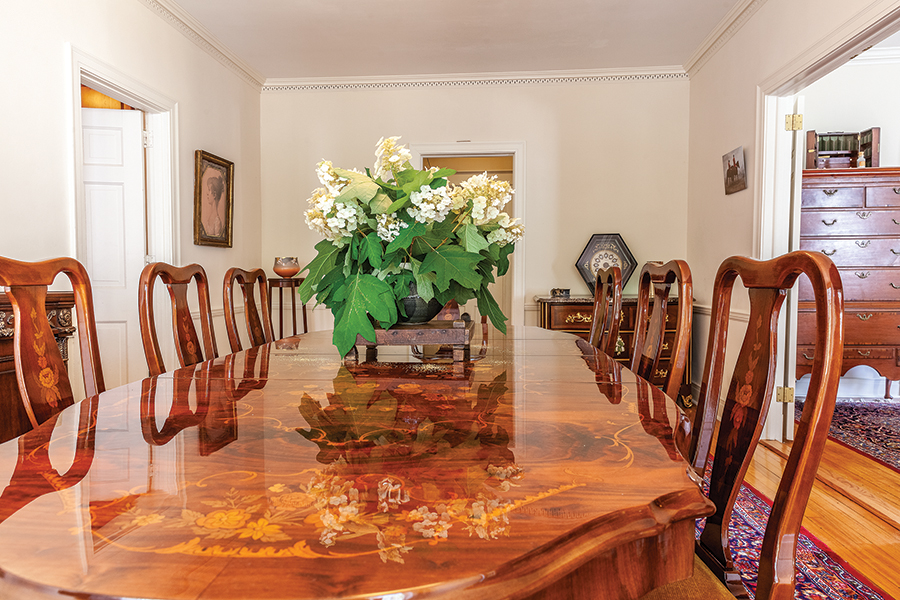 From the outset, Sherman saw it as more than a sprawling residence offering both beauty and privacy. “The light, the bay windows and curved walls, the moldings, the space” suggested a gallery. She is a connoisseur and collector of sculpture,  pieces displayed on pedestals acquired during travels to galleries and showings, preferably where the artist is present.

“I am intrigued and often moved by artistic expression — not sure why, but some contemporary art speaks to me,” she says. “I feel pleasure living with it and by purchasing it, supporting the artists, learning how they found their way.”

Understandable, since “my parents collected sculpture.”

Her involvement, more likely passion, begins with the sculpture outside the front door, which she describes as an ocean stone rounded by the sand and inexorable movement of the sea, with contrasting sharp lines of the artist’s cut and the potent symbolism of the center circle, all mounted on a steel base.

“It almost seemed an altar to the miracle of nature.”

Once inside, Sherman lovingly strokes a ceramic elephant fossil displayed in the small sitting room off a foyer where a wall-mounted metal torso flanks the front door. 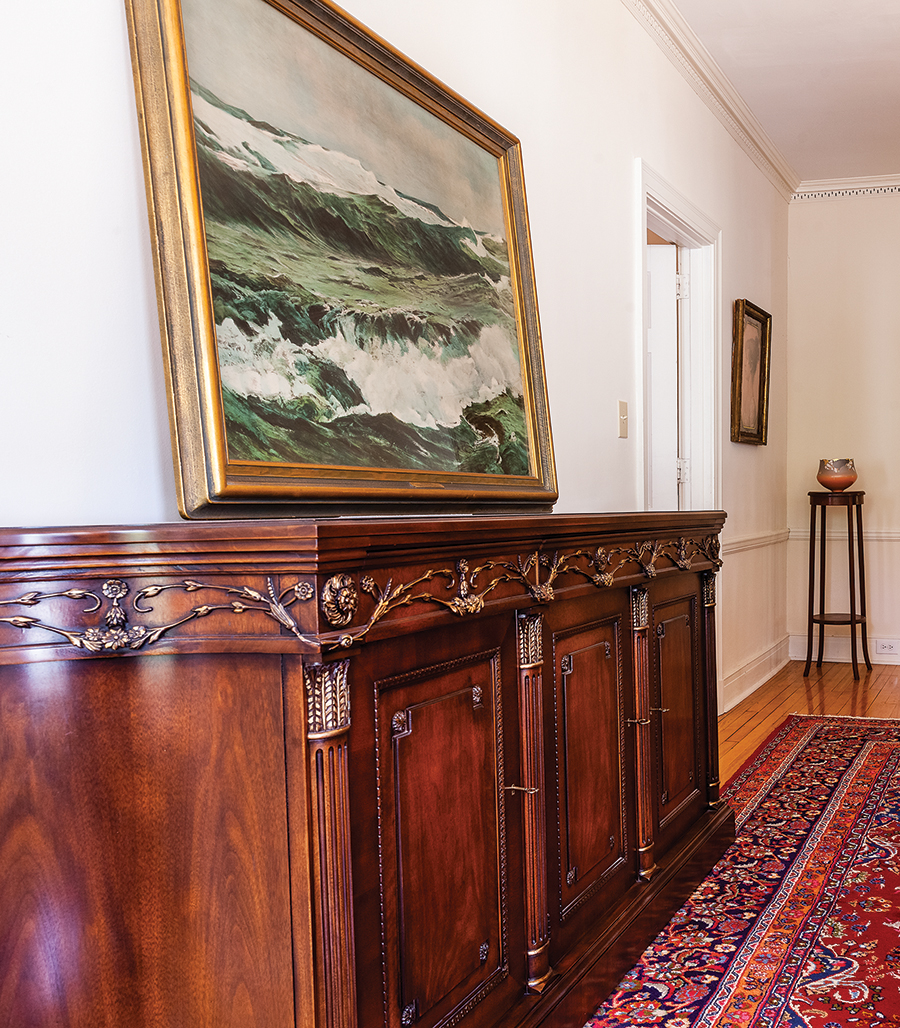 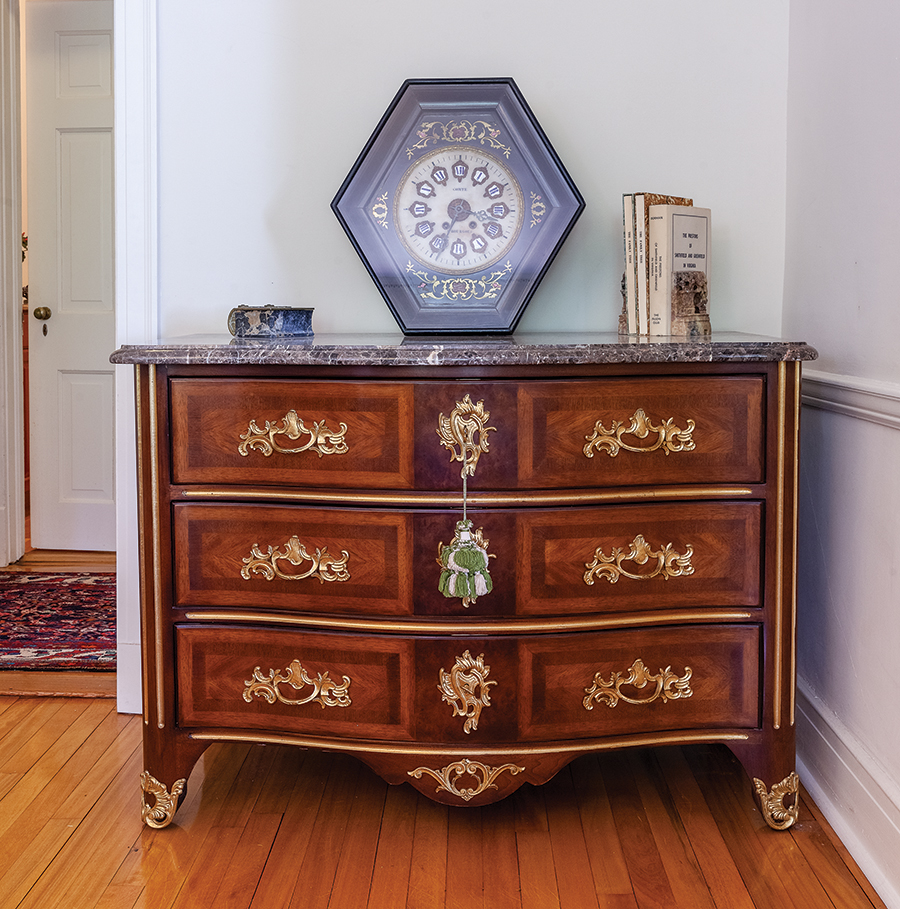 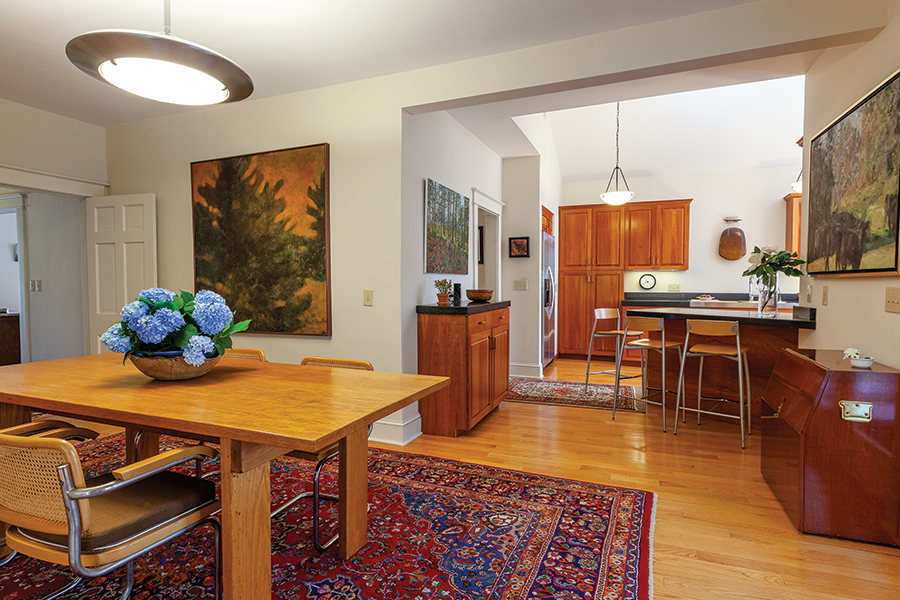 The house, purchased from the Drexel family, was once a hub for the six Drexel children and their friends. To accommodate the crowd, in addition to a huge living room, the Drexels added an even larger family room, where over the fireplace hangs a piece of geometric fiber art designed by Alexander Calder.

David Drexel was a popular Boy Scoutmaster who held events at Whitehall, recalled fondly by Scout Bob Ganis: “We would walk from Whitehall to a small pond in the woods to swim. That pond still exists as a water feature at Talamore golf course.”

Daughter Tina (Drexel) Adams remembers raising chickens and pigs: “I used to ride along in Dad’s truck delivering eggs.” She also recalls giving birth to her middle daughter there.

Sherman spent a year renovating without altering Whitehall’s character or floor plan. The rooms, like a maze, connect with each other rather than radiating from a hallway. A garage and screen porch were added, where Sherman sits and watches red-tailed hawks and deer. Original heart pine floors were refinished but not stained. Cherry cabinetry in the new kitchen channels the Arts and Crafts period. Even here a pedestal supporting a buffalo sculpture fronts a bare window, while another flat piece hangs over the sink. Large abstract paintings and landscapes, one by Evelyn Dempsey, decorate the passageway from kitchen to family dining room, delineated by an Oriental rug, one of dozens throughout the house.

The renovation included skylights and all systems, but not bathrooms tiled in that 1950s froggy green rarely seen since. “Look at the tiles, the workmanship,” Sherman says. “Before they came (in sheets), each tile was laid individually.” 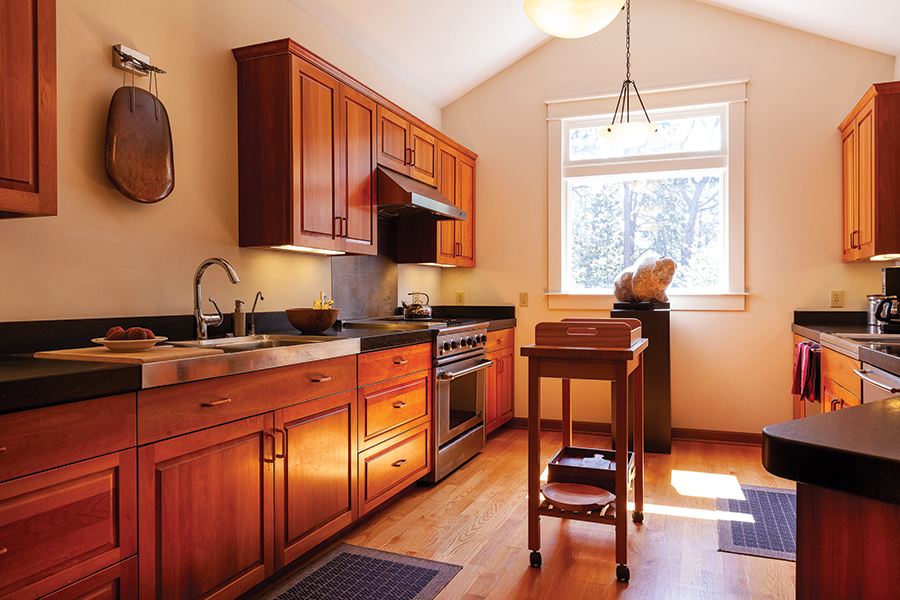 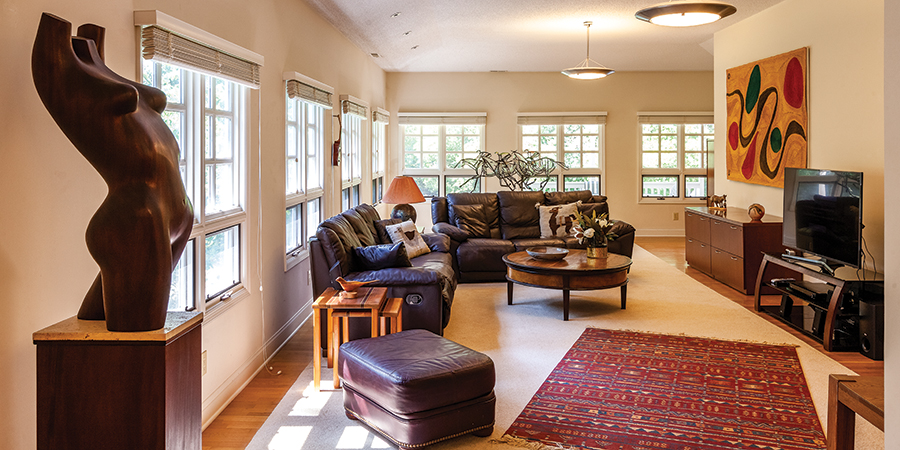 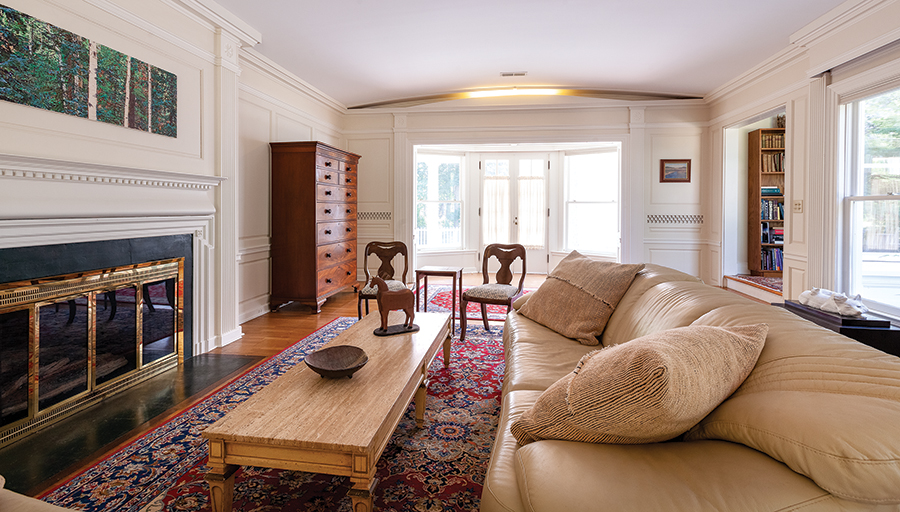 Of all Whitehall’s randomly situated rooms, one stands out. Located just beyond the small sitting room, this might have been a sunroom, with tall windows on three sides and the arched ceiling. Aside from several pedestals and a carpet, its only occupant is a jointed life-sized wooden block figure reclining on the floor, titled The Pine Man, which Sherman found in Cleveland.

When art comes first, integrating furnishings can be tricky. Sherman respected no boundaries. “My mother was an interior designer” who contributed many exquisite European pieces, including an inlaid dining table, lovely enough to leave bare when in use. Just as impressive, several burled highboys and a glass-front cabinet displaying a collection of about 40 fine china demitasse cups, some rimmed in gold. They belonged to Sherman’s grandmother, who lived in Greensboro.

“Do I look like a demitasse person?” Sherman smiles, wryly.

The showpiece, however, is a table piano dated 1791 made by Sebastien Erard, an 18th century French instrument crafter who received commissions from Louis XVI and Marie Antoinette. According to a music history, Beethoven, Chopin, Liszt, Verdi, Wagner and Mendelssohn also owned Erard pianos.

For the rest, Sherman chose plain, stocky tables, sandy-neutral leather chairs and upholstered sofas that do not draw attention away from the art and antiques. “Simple, handcrafted, esthetic” were her requirements.

For years Sherman drove almost daily to Raleigh. Once home, Whitehall fulfilled her need for nature. “I love being in the woods and observing the natural world around me.” This fulfillment has been shared with the public since David Drexel approached the newly formed Sandhills Area Land Trust (SALT) to establish a conservation easement. Therefore, the Whitehall Trail, a 2-mile loop and 57 acres surrounding it, will be reserved for public use forever. The rough, often leaf-covered trail is open to walkers (with or without dogs), joggers and cyclists, but not horses. 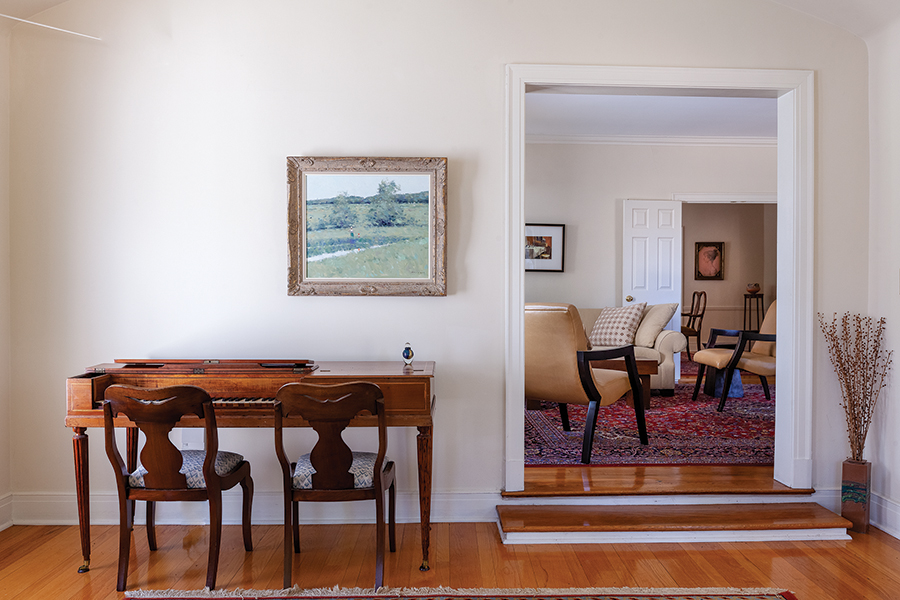 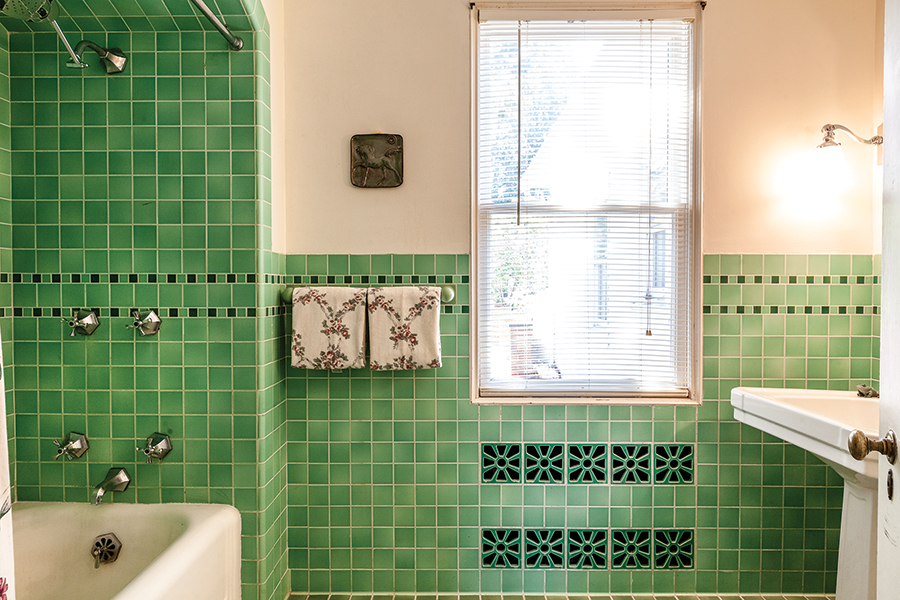 Sherman’s daughter is grown and gone. Since retirement, she and scruffy rescue terrier Jasper don’t need 6,000 square feet on 150 acres. They are moving closer to the horses she loves and understands, and a human community of the like-minded. Perhaps Whitehall will find new purpose as a proper gallery, or an organization’s performance/educational/arts space, she muses.

“Life has changed. I want to divest myself of so many material things, have less to be responsible for, live at a different rhythm.” This applies to mowing the pasture on a ride-on, but not to her collections.

“It is remarkable that people can create such things,” she says. “I will always want to be surrounded by art and nature.”  PS