The result: serene, quiet, contemporary with an Asian buzz and a transformative history.

If ever a house reflected its occupants, this is it.

Sun Moon and Sylvia are a fit, handsome, thoughtful Korean couple who know what they like. Their adorable daughters — Adrianne, 7, and Lillian, 3 — chatter in English or Korean in a family room where toys are the only clutter. 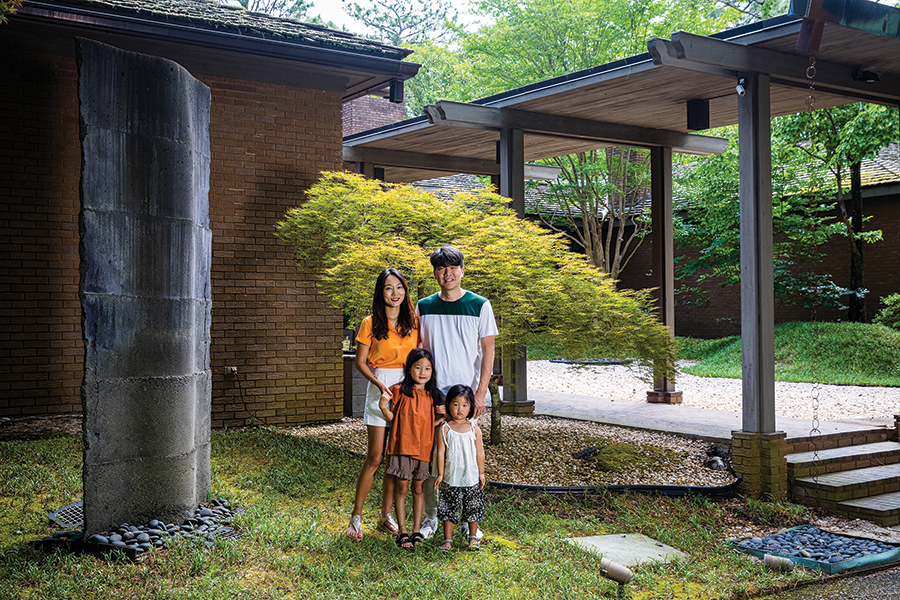 “We don’t like clutter,” Sylvia says, with a slight frown.

“We grew up that way — neat, clean, no clutter,” her husband adds. Already, the children understand tidying up.

The environment they have created matches a description of Korean architecture as naturalistic, simple, displaying an economy of shape and avoidance of extremes. However, the story of how the Kims found this house deep in the Country Club of North Carolina residential enclave illustrates serendipity, or luck.

Sun Moon was born in Brooklyn, where his father studied medicine. He returned to Korea for seven years before settling in the United States. While an undergrad at Georgia Tech he met Sylvia, a stunning Korean flight attendant who traveled worldwide for Etihad Airways, based in Abu Dhabi. She would arrange her flight schedule to coincide with his whereabouts. Sun Moon’s medical training and cardiology specialty took him to the West Indies, Kentucky and Chapel Hill where, now married with children, they squeezed into rented townhouses.

Settling in a small town wasn’t their agenda. However, when Sun Moon, a golfer, learned of the Reid Heart Center in Pinehurst, he said, “Let’s go visit.” He was impressed not only by the medical facilities, but by the area where “kids run around among trees and nature.”

“We fell in love,” Sylvia said.

Enough in love to accept a position at Reid and look for a home that met their stringent specifications.

Move-in condition was not one of them. 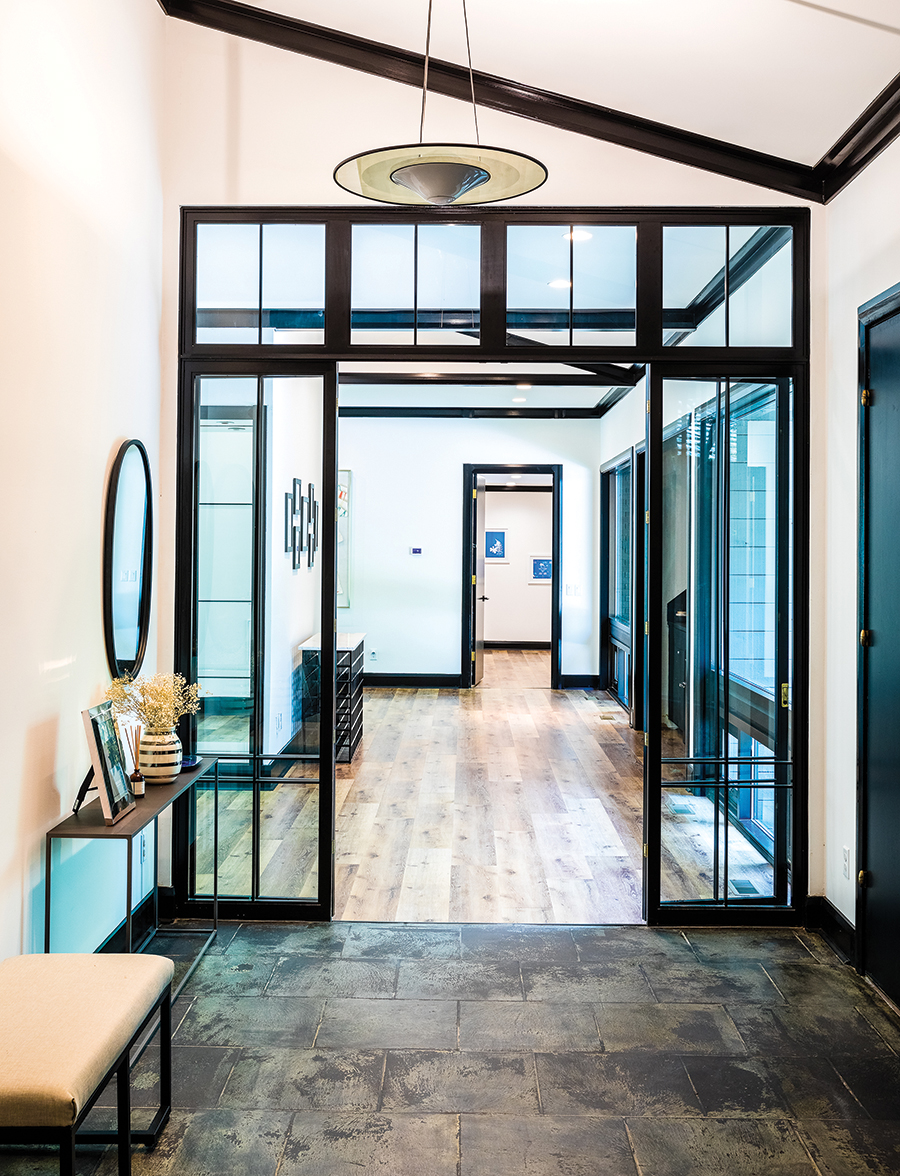 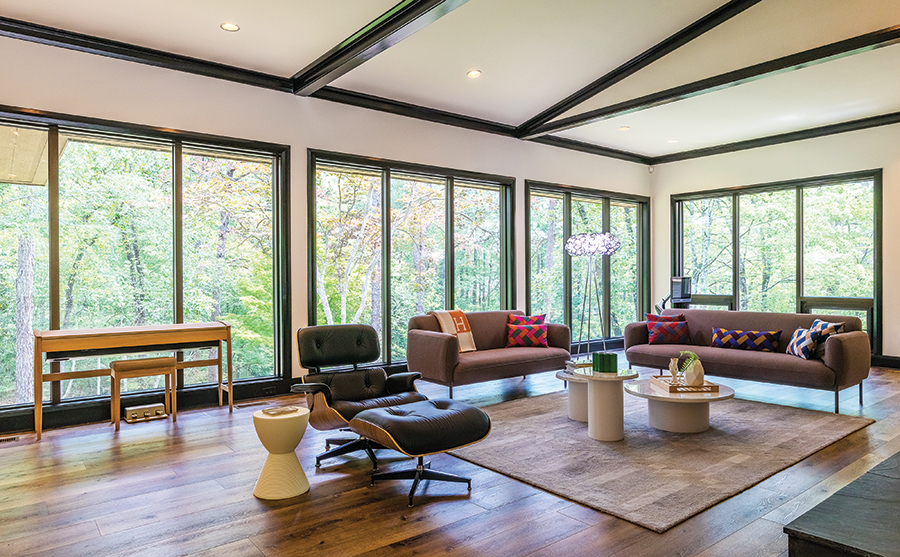 Matsumoto’s students and successors spread the concept through the Research Triangle and tri-state areas. Ed Lowenstein, another modernist who revolutionized Greensboro, sent Thomas Hayes to Southern Pines, where Hayes settled and built not only his own home, but several others in Weymouth, Knollwood and elsewhere.

In 1952, the all-boys club received a woman’s touch when Elizabeth Bobbitt Lee became the first of her gender to graduate from the N.C. State design school. By 1986 Lee, now an established architect, was hired to design a house at CCNC.

Like its prototypes, it was described as “very brown,” meaning the exterior faded into the wooded acreage, but its outlines suggest an Asian influence. The Kims saw beneath the flowered chintz upholstery and wall-to-wall carpet within.

“The architecture was way ahead but (the interior) was stuck in the ’80s,” Sun Moon says. “We walked in and saw the house as our own sanctuary.” In 2019 the house had been on the market for a while. “It needed total renovation.”

No problem. They were young, brave, strong, ready to tackle the job, in part with their own hands. Besides, they found a talisman left hanging on the living room wall: a large painting of a kimono, common in Korea as well as Japan. 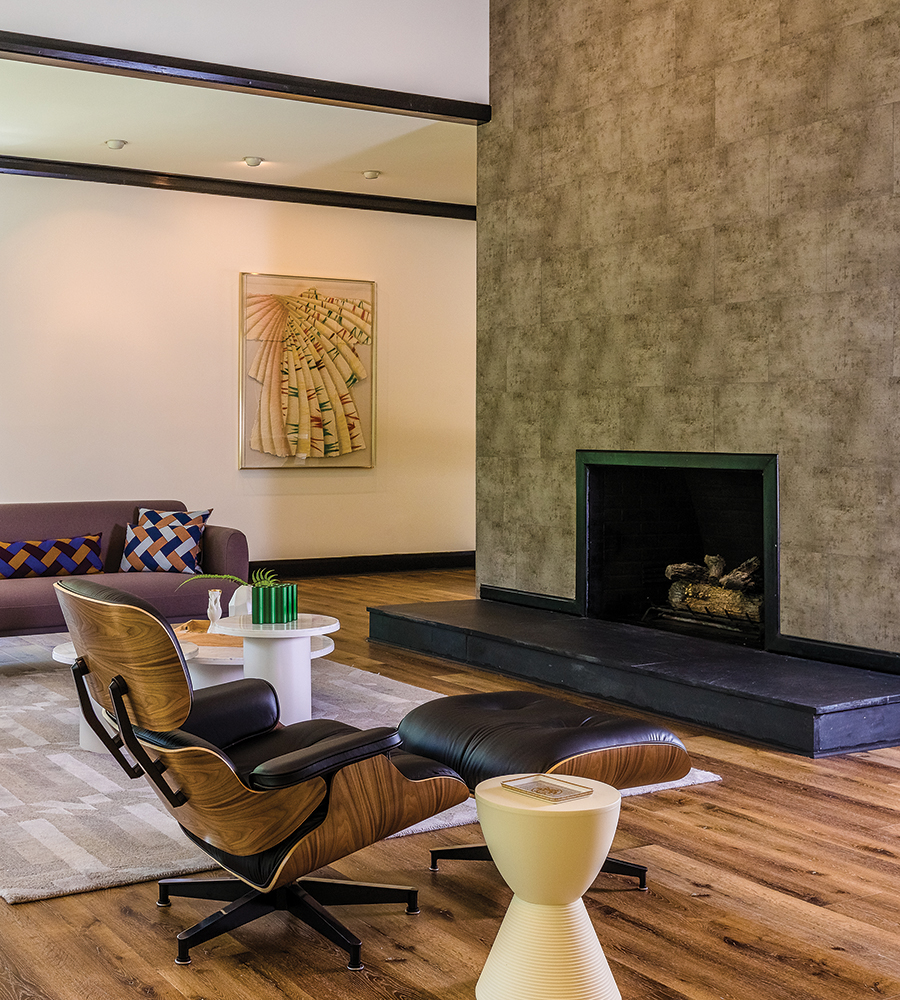 “This is it,” they decided, and looked no further.

Renovating a 6,500-square-foot house with six bedrooms (each with a balcony) and eight bathrooms (previously 10) while Sun Moon practiced cardiology and Sylvia cared for two young children proved a challenge. They acted as general contractors, hiring professionals for plumbing and electrical, heating and AC, but did much of the design and grunt work — stripping wallpaper, painting, carpentry, installations — themselves. Enclosed spaces were opened, a flow established from the enormous family room leading onto an equally enormous deck, through dining room, living room (with fireplace in the center rather than on an exterior wall), built-in bar area and hallway to all main-floor bedrooms except the master, which is located off the family room. In the true spirit of minimalism, this master bedroom is simply a low platform bed in a room, with tissue-fabric window coverings and a wall decoration composed of slats. No chairs, no chests or tables, no bureaus. Adjoining is a windowless bath-dressing room-closet suite the size of a studio apartment, centered around a double shower with glass walls on three sides. The entire house, previously carpeted (even the bathrooms), is unified by PVC floorboards, a contrast to light area rugs.

“This is good for the kids and the dog,” Sun Moon says.

Because the house is built on an incline the basement is above ground, with a central room, still empty, proportioned for floor hockey or tricycle races; also a kitchen and two guest bedrooms with bathrooms perfect for grandparents, still in Korea.

Just outside the glass doors, the girls play on a colorful gym set like those found in the best parks.

Realtors suggest a house sinks or swims in the kitchen.

The Kims are foodies. “We live to eat,” Sun Moon says. Travel destinations include culinary meccas. The Kims demolished the original kitchen — huge, well-equipped by 1980s standards, with light paneled wood cabinetry — to install a smaller version, designed by Sylvia, where every square inch has a purpose, every cupboard holds enough, but not an overabundance, of dishes. Where the highest-end appliances work to optimum efficiency. Where the Asian aura continues in sleek black, brown, sand and white surfaces. Where Sylvia and Sun Moon prepare beautiful, healthy Korean and American meals. 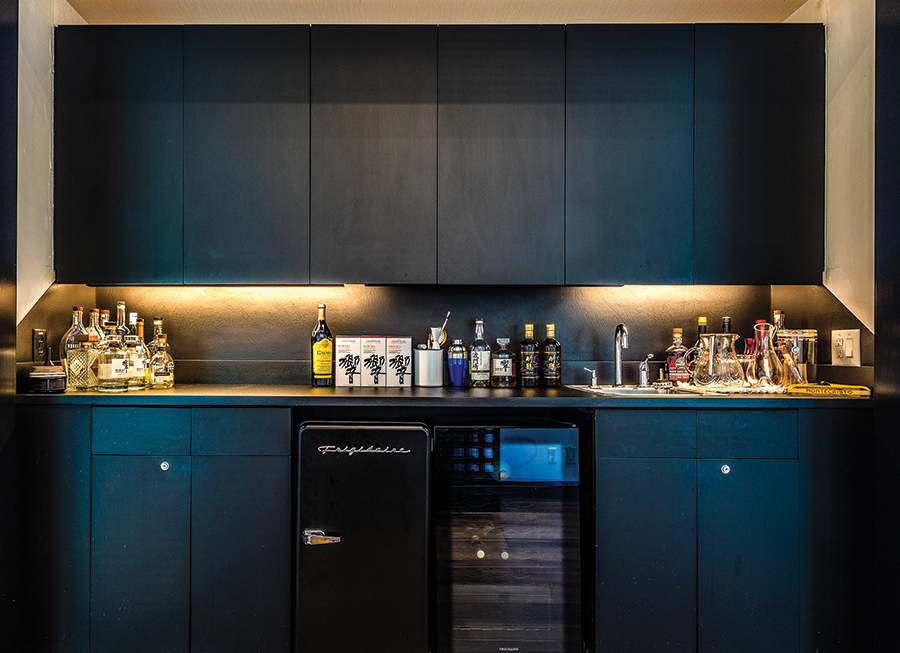 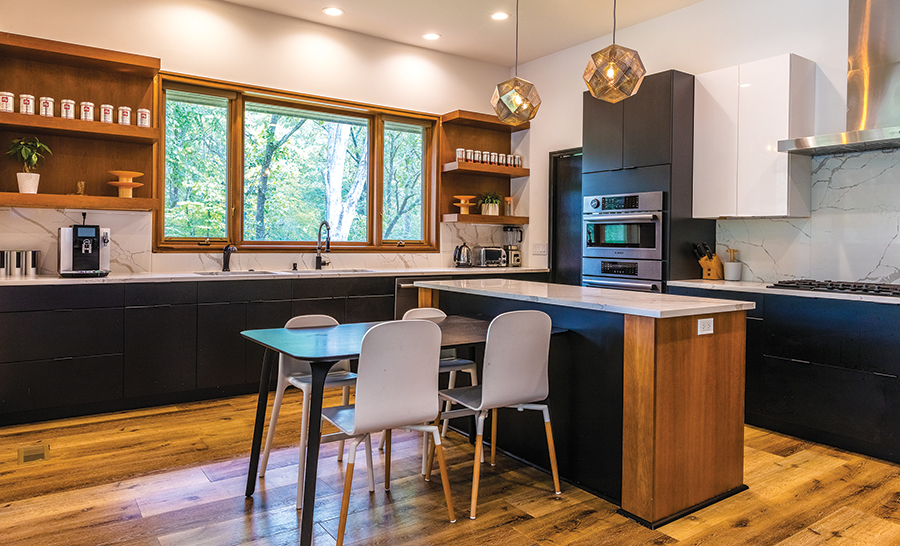 In a bold but logical move, this couple decided to leave almost all their furnishings behind and start anew. High Point wasn’t an option. Sylvia measured carefully, then shopped online for simple pieces, some statuesque, others spectacular, like the dining-area chandelier. She chose neutrals, avoiding primary colors except in the princess-style girls’ rooms in pink and mint green.

“I looked at thousands of pictures for inspiration but I didn’t copy anything,” Sylvia says.

The 5 acres surrounding the Kim residence have been left au naturel except for a stone walkway linking the house and two ponds, one with a footbridge, each with a geyser fountain, both large enough to accommodate fish. Another water sculpture stands between the circular drive and front door, creating an expectation of what lies ahead. Foliage hides the house from the road. Moss covers much of the ground. Azaleas and dogwoods bloom in the spring, but formal beds would look contrived.

Minimalism as practiced by the Kims is more than a style or a period, furniture or decor. “I try to apply it to general life,” Sylvia says. “I spend time researching before I shop, think a lot about minimalizing the amount of stuff in our lives.” Buying less allows buying better. This applies to groceries and clothing.

“We want each piece of furniture to go along with the rest of the house — and let the house do the talking,” Sun Moon adds. “We want to breathe the house, enjoy it with five senses.”

Luckily, husband and wife share the same taste and philosophies. Otherwise, “People can get divorced when renovating a home,” Sun Moon says.

Not the Kims. Their house represents a partnership moving in the same direction, inspired by an American feminist trailblazer who challenged Southern tradition with an architectural mode distilled from Frank Lloyd Wright, George Matsumoto, Scandinavian modern and classic Asian, which coalesced when a Japanese-American came to Raleigh in 1948 to inspire a coterie of architects chafing for change.

“We’ve seen photos of Miss Lee on-site,” Sun Moon says. “I think she would be proud, how we preserved the story of the house and honored the architect,” in part by returning the interior to its intended karma. “My motto, don’t follow any one trend. Instead, do what expresses us in the best way.”  PS 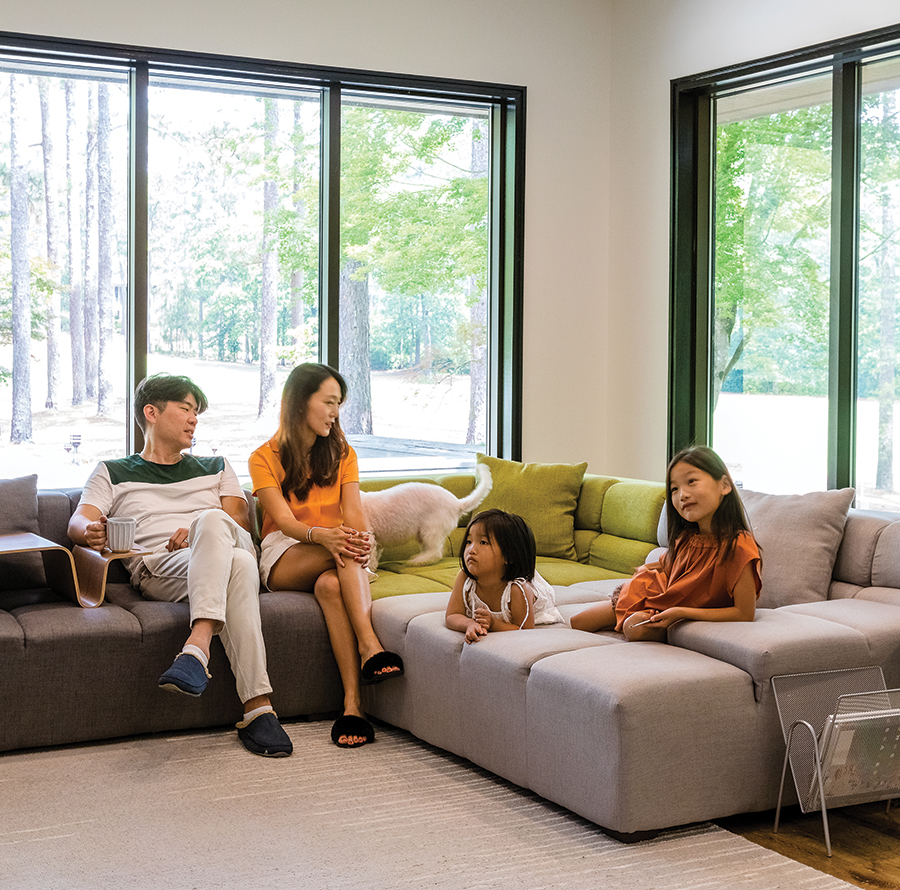 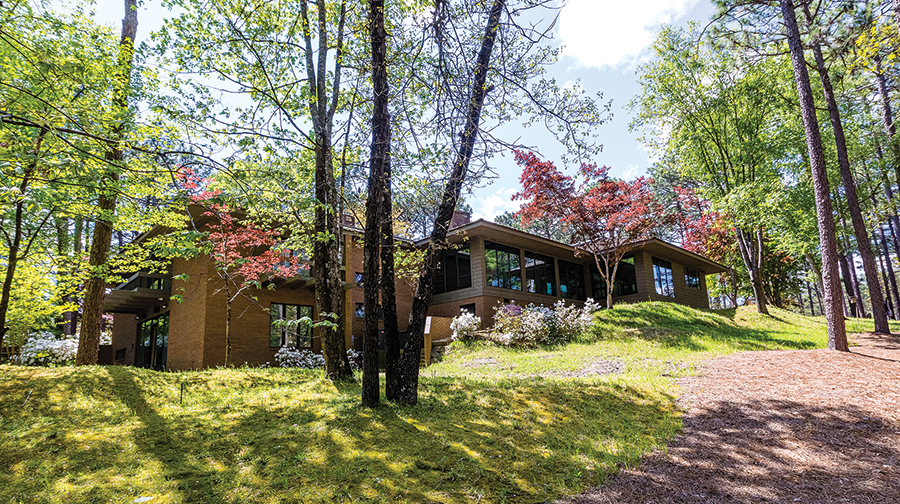