A Tradition of Culture

The many lives of Campbell House

Surviving through myriad incarnations, Southern Pines’ Campbell House is one of the region’s most significant landmarks, owing its existence to the Boyd family. Once part of their Weymouth estate, for more than 100 years it has been a center of culture, informing, influencing and enhancing civic life.

It is an outstanding example of a Country Place-era estate created over time by a remarkable series of individuals who began settling in the region around the turn of the 20th century. The fledgling Sandhills resorts were rising from the dusty remains of a former turpentine and lumber industry outpost. The backdrop for this transformation was the greater social movement of the day, a reaction to the cultural upheavals brought about by industrialization and urbanization. The Sandhills fit perfectly within the country life paradigm, appealing to America’s growing fascination with vernacular culture and native folk.

The lives of Campbell House comprise four significant periods: first the home of James Maclin Brodnax, then expanded into the original James Boyd House with additions from local Colonial houses; next moved and enlarged at its present location by Jackson Boyd; later the home of General Motors heir Maj. William Durant Campbell; and now a municipal property, home to Southern Pines Recreation & Parks Department and the Arts Council of Moore County.

The first period opens with James Boyd’s 1904 purchase of a sizable portion of land on the eastern ridge above downtown Southern Pines. Within months, the matter of building a residence was altered by the death of his kinsman, James Brodnax, who had built a two-story Colonial Revival-style home for himself on the property. James Boyd, grandfather of writer James Boyd and his brother Jackson, enlarged the Brodnax House into an imposing mansion, incorporating building elements dating from the late 18th and early 19th centuries. The Brodnax-Boyd House was located 100 feet in front of present-day Weymouth Center. 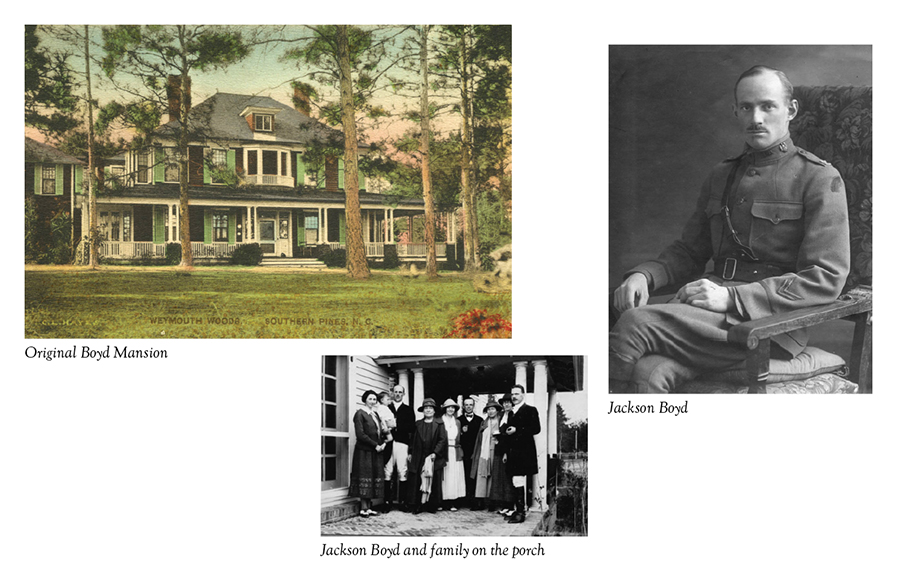 In 1921, the Brodnax-Boyd House was separated into two blocks and both moved by mule teams across Connecticut Avenue, where they became the core of two new residences. One part was refitted as a residence for Jackson Boyd (Jack) and his family, and it remained their home, following major rebuilding in 1936 after a fire. Another part of the Brodnax-Boyd House is now the dwelling standing at 435 E. New Hampshire Ave.

Jack and his brother, writer James Boyd, founded the Moore County Hounds in the winter of 1914. They saw this aristocratic sport in democratic terms and felt that it should belong to the town. Proper dress or not, anyone who wished to hunt was invited to come along, so huntsmen in formal attire rode with farmers on horses more accustomed to plowing than jumping fences.

As a captain in the Marines, Jack was in charge of canine training at Camp Lejeune. Being from blueblood hunt country, he was a trainer, breeder, master of 70 foxhounds. Jack taught his war dogs to march in cadence, heel on regular intervals, and perform ordered drills. More training prepared them for track and attack missions and watch duty. His division’s canine records included letters of commendation, citations and a discharge certificate. In many instances, a formal photograph of the dog was included upon promotion of the dog to sergeant.

Jack’s eldest son, John Boyd, was killed in action at Guadalcanal, and the local VFW post is named for him. Those who knew Jack Boyd say that his son’s death was a severe blow and he left  Southern Pines shortly after the war.

In 1946, Major W.D. Campbell purchased the Jackson Boyd House and he made extensive changes, facing the unpretentious frame structure with ballast-brick from Charleston, South Carolina. The same brick was used in the formal landscaping and walled garden at the rear of the house. In 1966 the Campbell family gave their property to the town, asking that it be used for the cultural and social enrichment of the community.

Evidence of history can be found throughout the building, with a striking contrast between the formal entrance and the informality of the large pine-clad room on the east wing. This room, known today as the Brown Gallery, encompasses the most visible remains of Brodnax-Boyd House with its circa 1820s mantel and beaded hand-planed paneling. 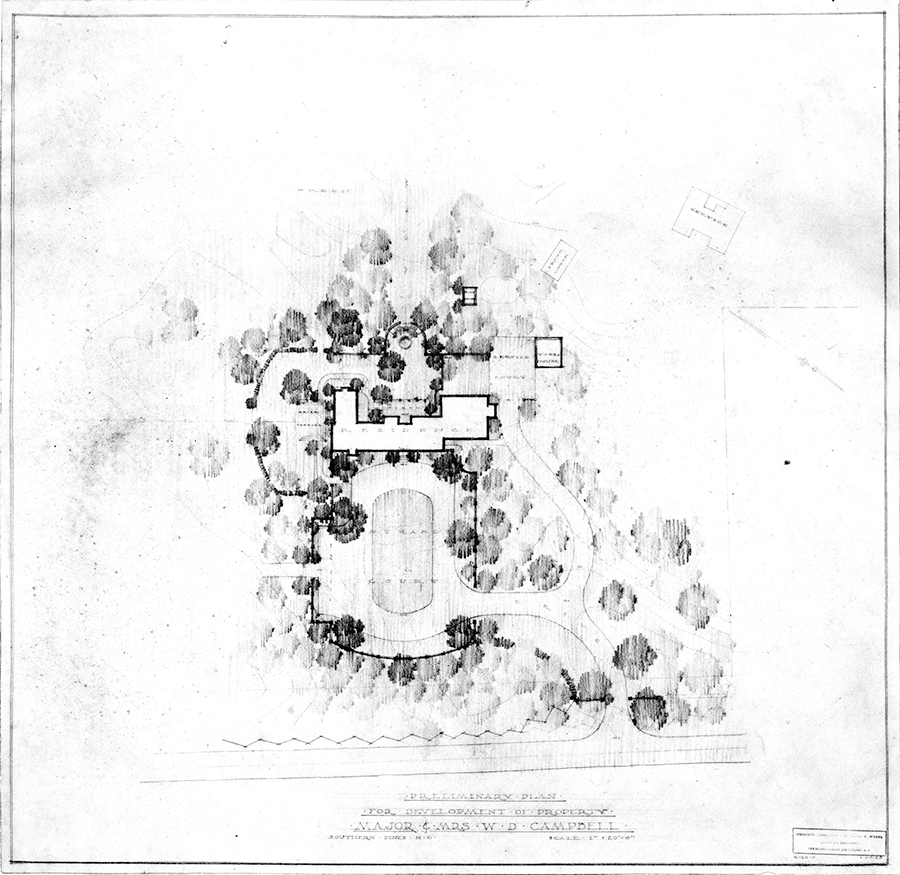 In Jackson Boyd’s time the main staircase rose at the back of the foyer, but the Campbells reconfigured it to rise at the front, opening up the back wall with glass doors. The foyer and former dining room, now the White Gallery, remain unchanged from the late 1940s with marble-chip terrazzo flooring, marble staircase and decorative wrought-iron railing. A medallion graces the entry hall floor. Inscribed in Greek, it depicts an African antelope bagged by Maj. Campbell for the Museum of Natural History in New York.

The Campbells and their daughter, Margot, were active in many civic and community affairs. Mrs. Campbell was one of the founders of the Southern Pines Garden Club. Maj. Campbell’s interests included the Red Cross, Boy Scouts and model trains and he built the Train House to house his collection. An Eagle Scout in his boyhood, Campbell became a leader in the national and international movement, an activity that eventually called the family away from their home in the pines. Born in Flint, Michigan, Maj. Campbell was the grandson of William Crapo Durant, the co-founder of General Motors and Chevrolet, and the founder of Frigidaire. Campbell graduated from Princeton University in 1929 and initially pursued a career in banking. During World War II, he was a battery commander and retired from Fort Bragg in 1946 as a major. He became involved in Scouting as an adult at the suggestion of its British founder, Robert Baden-Powell. His travels convinced him that Scouting could do much for young people and he took a special interest in furthering the organization in developing countries with programs tailored to local needs. That philosophy and his personal commitment saw a doubling of the Scouts’ membership in the 1970s and 1980s, chiefly in the Third World. A philanthropist, Maj. Campbell was also on the executive committee of the Mystic Seaport Museum and a director of the National Audubon Society.

When the Campbells gifted the property to the town, a board of directors was appointed, bylaws were established, an on-site director was hired, and a vigorous program developed to put the property to use. The Southern Pines Information Center was installed in the main house, and the Stoneybrook Racing Association moved into its west wing office. 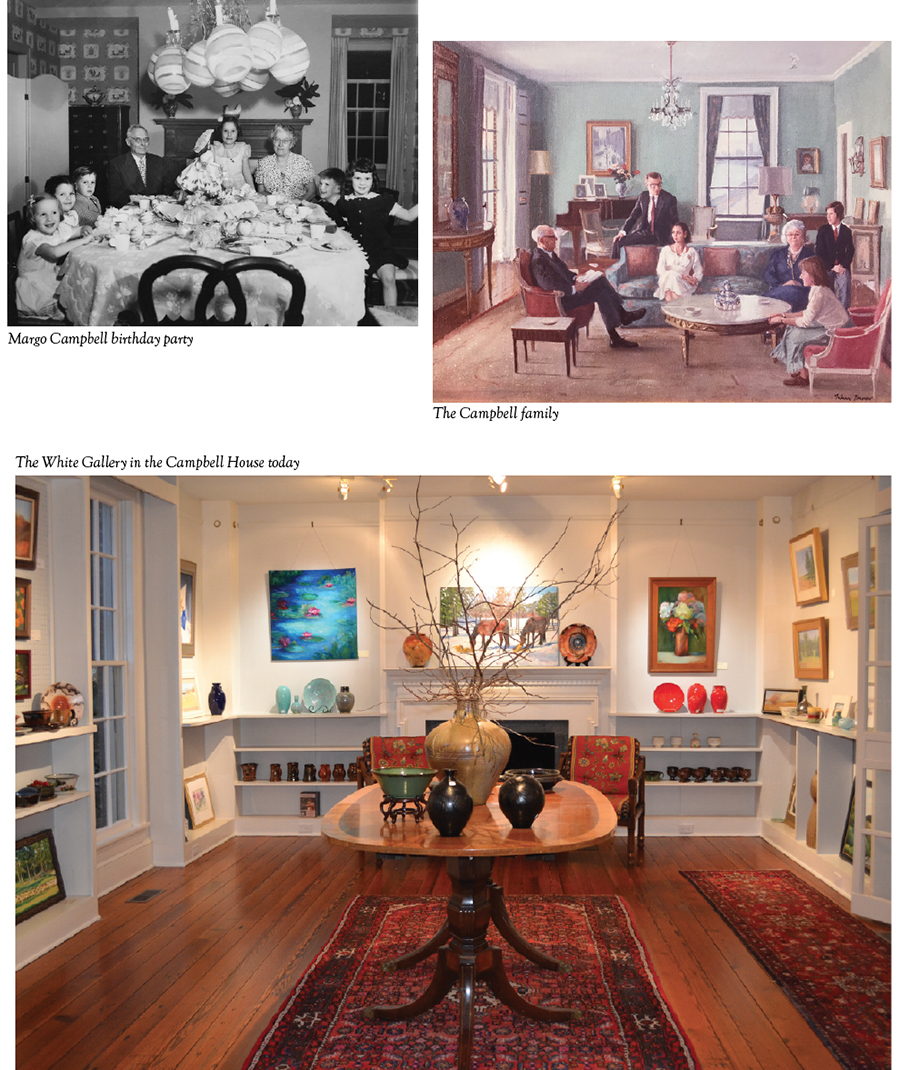 The Boy Scouts were among the early organizations at Campbell House, along with offices for the Humane Society of Moore County and Moore County Historical Association. In the late 1960s, a small golf museum was set up in the former dining room, and this collection was later turned over to the World Golf Hall of Fame.

In 1972, Southern Pines established a year-round recreation and parks department centered on the property. This program is now the biggest user of the site with its offices on the second floor of the main house. The first floor is the headquarters of the Arts Council of Moore County, where they maintain two galleries that display the work of different artists every month and a sales gallery that showcases the work of regional artists.

Thousands of visitors have enjoyed Campbell House, hundreds of volunteers have given time and energy to the fulfillment of its purpose, and a small, dedicated group has taken personal responsibility for its success.

Moss gathers on the ancient lawn as azaleas bloom late against fading bricks. Across the lot, live oaks keep the view — if they could speak, what stories would they tell, wide spreading boughs, nothing missed in their branches. Some say the house is haunted and at twilight the apparition of a woman drifts across the stairs, a lingering reminder of lives that have come before.  PS

Ray Owen is a local historian, who works for the Arts Council of Moore County.