A Celebration of Mother’s Day

Gracefully doing the hardest job in the world

Photographed at Weymouth Center for the Arts & Humanities

If Dad wasn’t married to Mom, he would live in a one-room house with beige carpeting, beige walls, a chair, three remotes he can’t find and cable TV he can’t surf. He has a sense for décor now, but that’s only because Mom has been training him for three decades plus. Last time I asked, Dad didn’t even know what bank they use or how much money they make. Mom could yank their well-decorated house right out from under him but, instead, she makes it his home — our home. Dad isn’t the only one who hopelessly leans on Mom, Captain Kath, as we affectionately call her, much to her faux chagrin. My brothers and I are in our late-20s, early-30s and we still phone the Captain when crises arise, from a lost set of car keys to a lovers’ quarrel. Without fail, she rejiggers her jam-packed schedule to solve our problems long distance. Thank you, Mom — we certainly don’t say that enough. What follows here is the tip of a very large iceberg — six Sandhills mothers who, just like Mom, keep all the balls in the air and make it look easy, even when it’s not. 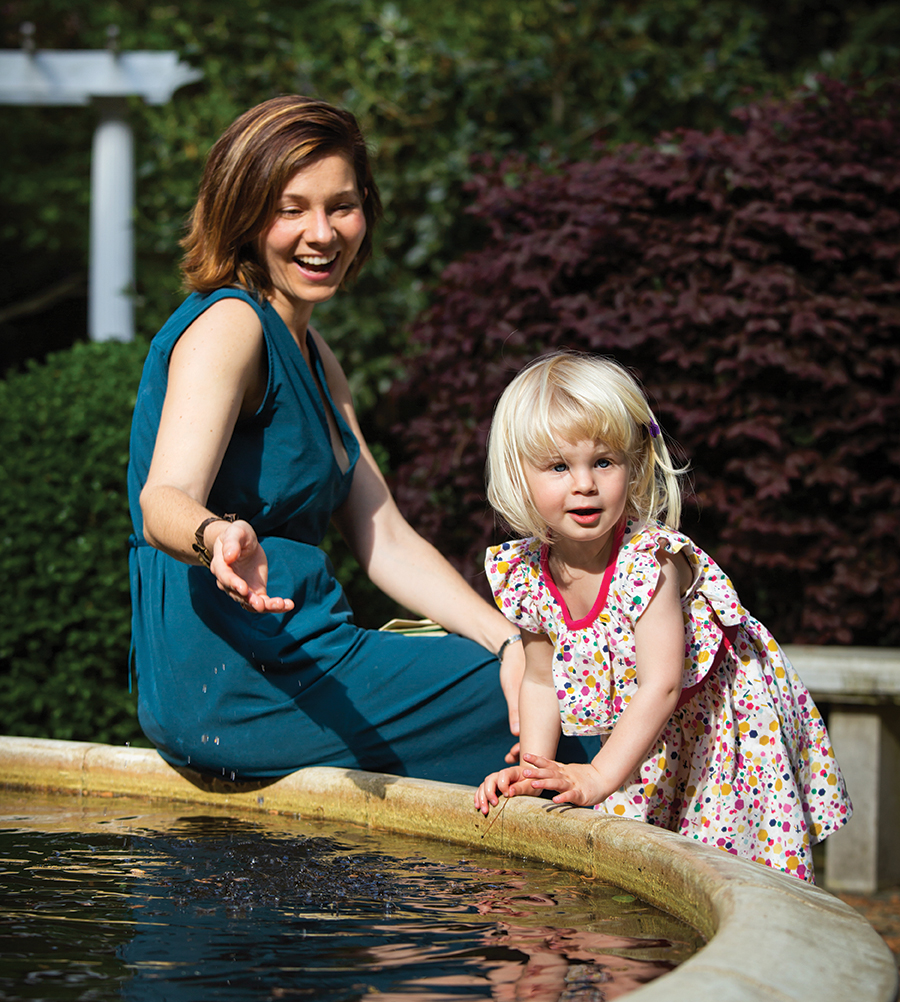 El Sistema is the colloquial name for a Venezuelan program that was founded in the 1970s to bring world class music instruction to underprivileged kids, and the movement has since spread worldwide. “The whole model of El Sistema is like an Olympic development program for music,” says Katie Wyatt, the founding president and CEO of El Sistema USA, a nonprofit organization that supports all El Sistema-inspired programs nationwide. “It’s way beyond your general music class, and the idea is to offer that kind of access and opportunity to all kids.” But El Sistema USA isn’t all that Wyatt does. She is the Carolina Philharmonic’s principal violist, supports the Weymouth Center in an interim capacity, teaches at Duke University, and is mom to 2 1/2-year-old Petra. “We’re buddies; we do a lot together,” Wyatt says of her daughter with a smile. “A lot of modeling for her is — this is who I am, this is something to aspire to be. It’s just the idea that you can do a million things. You can have this entrepreneurial mindset, which I think is this mindset of curiosity and challenge and discipline. The motto of El Sistema is ‘tocar y luchar,’ to play and to strive — and I am big on the luchar.” Petra is, too. “She is just rough and tumble. From the minute she could walk, she ran.” 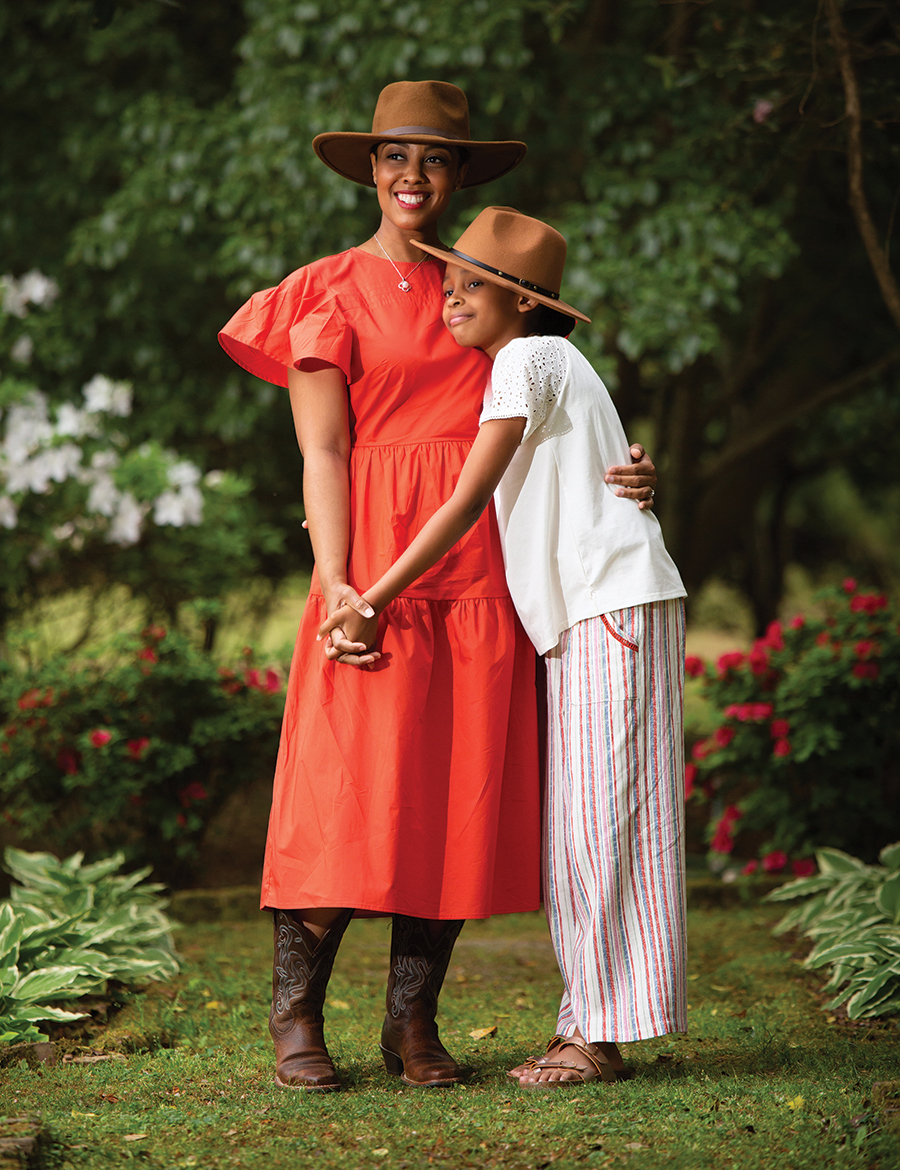 Until last fall, Micaela Murphy and her family lived in Austin, Texas. But after student teaching observation at Moore Montessori, she was offered a job and the trio came to live in the Sandhills. “By study, I was in biology. I just loved the sciences and that was my path,” says Murphy, who’s now a lead guide at Moore Montessori. She pivoted away from the sciences after her daughter, Maliha, came home from school one day. “She was like, ‘Mom, where are all the teachers that look like me?’ She was like, you know, the brown skin and the curly hair that look like me.” Murphy had a conversation with one of Maliha’s teachers, who said there just aren’t a lot of Black teachers in Montessori. “Well, surely that’s not the answer,” Murphy reflects. And, if that was, it didn’t seem like a good one. “So, I was like, ‘OK, well, there’s not a lot?’ I’ll go ahead and become one.” And she did. “Long story short, I became a Montessori teacher, and my daughter encouraged the path that I’m on now.” Murphy describes her daughter, who’s now 9: “She’s everything that I’m not, all the best parts of a person, untouched by adult interference. And I say that because she still has this beautiful take on the world. She still has this humanitarian spirit. She still has this ‘But what if we can?’” 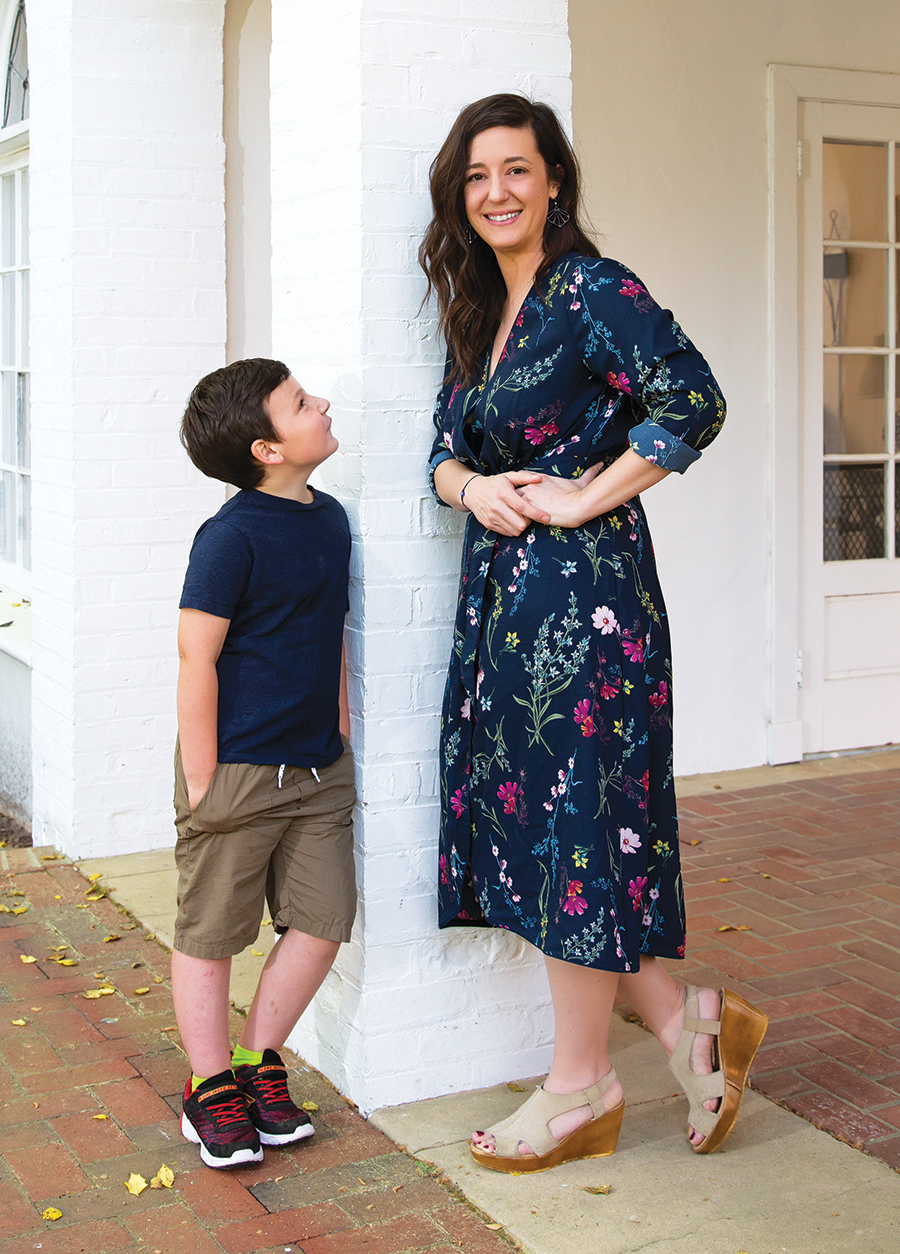 Owner of Against the Grain Shoppe

“I remember one time Reid told someone that I didn’t know — he was like, ‘Yeah, my mom owns a store,’ and, it was right after we opened, and it didn’t really feel real until he said that,” says Ashley Tramontin about her 7-year-old son. “I mean, I know he’s aware and paying attention, but it was so special to hear him be proud about it.” Tramontin started making and revamping furniture after hers was damaged in a move to the middle-of-nowhere Kansas. She recalls, “I started doing furniture for myself and then friends and built it into an Etsy store.” When she relocated to the Sandhills, she started selling her furniture in the area and eventually opened Against the Grain Shoppe to sell her wares and those of other local makers. Reid might be among them someday soon — he recently made and sold his first bench. But what he really enjoys is the back end of the business. “He loves to count the drawer for me,” says Tramontin, laughing. “He knows there’s supposed to be X-amount of money in here, and then he can figure it out, and then he can yell at me for not having it correct, and he loves it.” 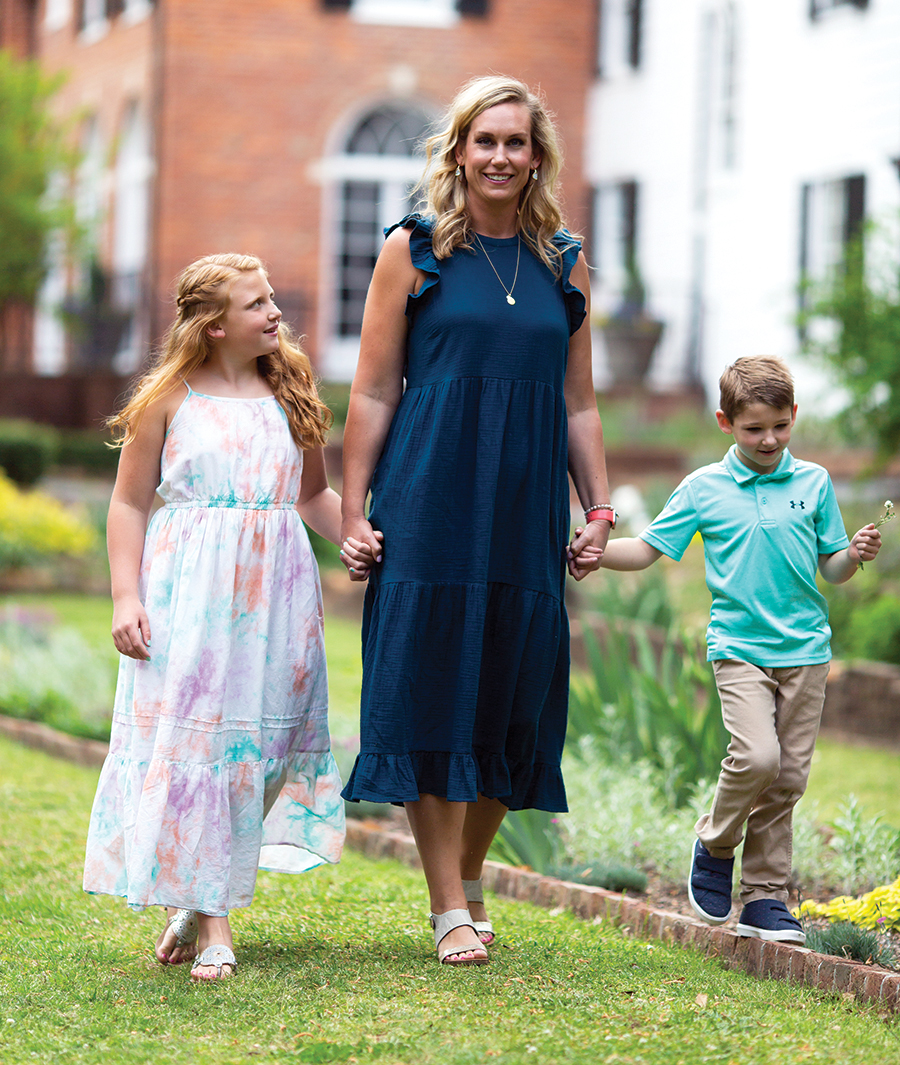 Jane Claire Dawkins is going on her 16th year of nursing — she’s now the quality coordinator for sepsis at FirstHealth Moore Regional Hospital. “There are certain core measures that we have to meet as a hospital, and my job is making sure that we’re compliant,” says Dawkins. She’s no longer providing bedside care in her day-to-day, but she has been administering COVID vaccines a couple of times per week at the community clinic. “It’s my way of giving back,” she says. Dawkins started her career in pediatric intensive care units. After she and her husband were married, they decided to make their way back to his hometown in the Sandhills. “We just felt called, really, for the sense of community,” she says. They liked the idea of raising their kids, Mary Britt, age 8, and Will, who’s just turning 5, in the area. “Mary Britt is super mature, and she’s super outgoing,” Dawkins says. “Will, he’s kind of like, he’s just my sweet little guy.” She smiles. As Dawkins’ family grew, her nursing career evolved, and she’s proud of the work/life balance she’s struck. “It’s definitely a dynamic field,” she says of nursing. “So many opportunities to work more or less, at the bedside or behind a desk, just depending on where you are . . . the season of life.” 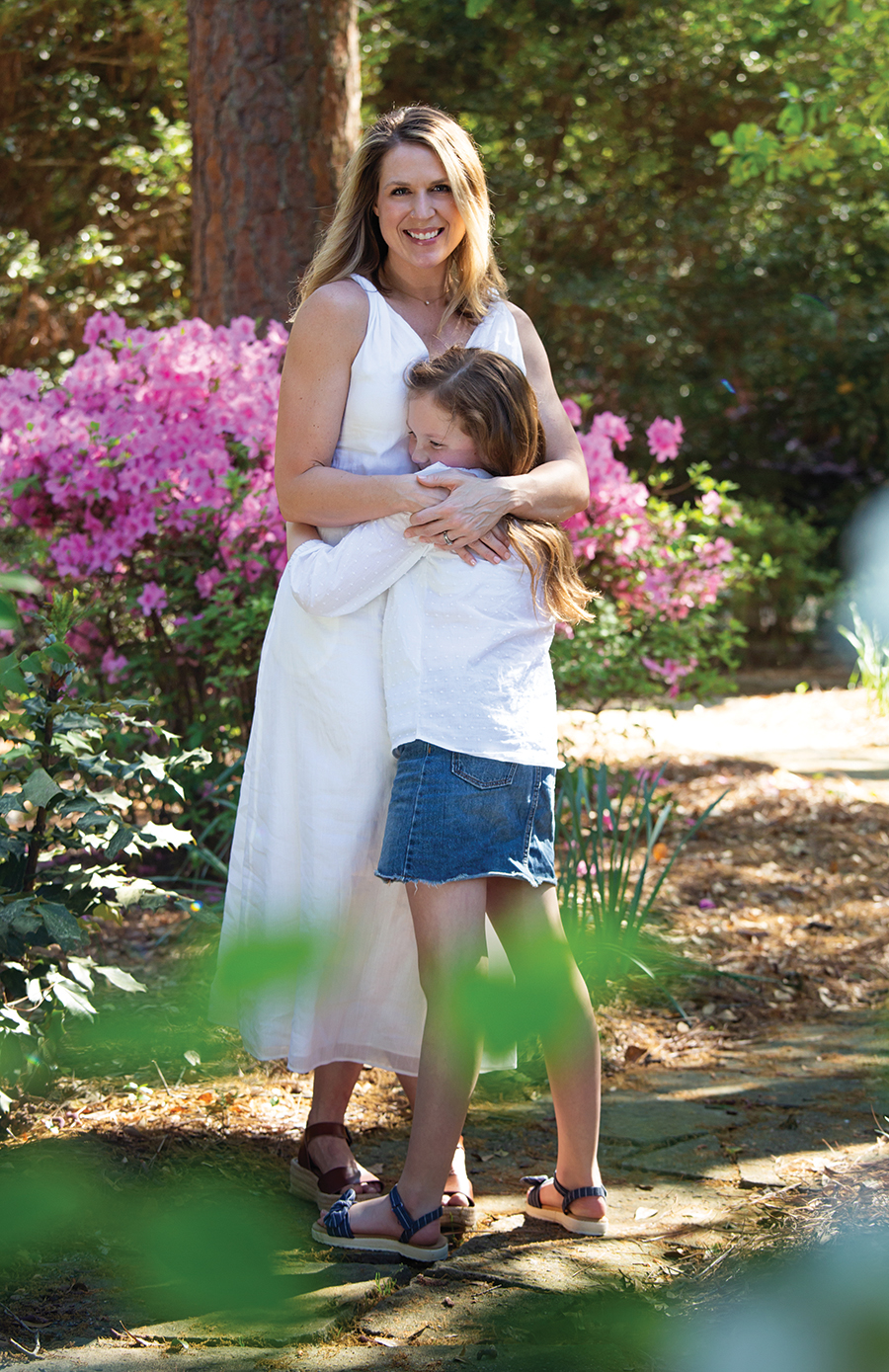 “Regardless of what you try to shield them from, I think she was pretty aware that it was a tough year,” Tiffany Fleeman says about her new business, the pandemic and her 9-year-old, Olivia, or Liv, as she and her husband, Joel, call her. After a 2 1/2-year upfit, Fleeman opened Workhorse Fitness & Yoga in November 2019, just in time for the COVID pandemic. “This year was just such a hard time, teaching her not to give up. I mean, there were so many times this year — it’s hard to admit this — but giving up, it crossed my mind,” she says. “The business was new, and it was tough, but looking back, that’s never the example I want to set.” Liv is already resilient and blazing entrepreneurial trails just like her mom. “She has, through all of this, started her own little business.” Fleeman smiles. “She has this little plant business, and so we do that together. I help her make her little Marimo moss balls and these air plants that she sells in our store.” Workhorse has an in-house retail shop, fittingly called LIVWell. Fleeman continues, “She’s like, ‘Mom, you owe me this amount.’” She laughs and shakes her head. “She’s going to be a great businesswoman someday.” 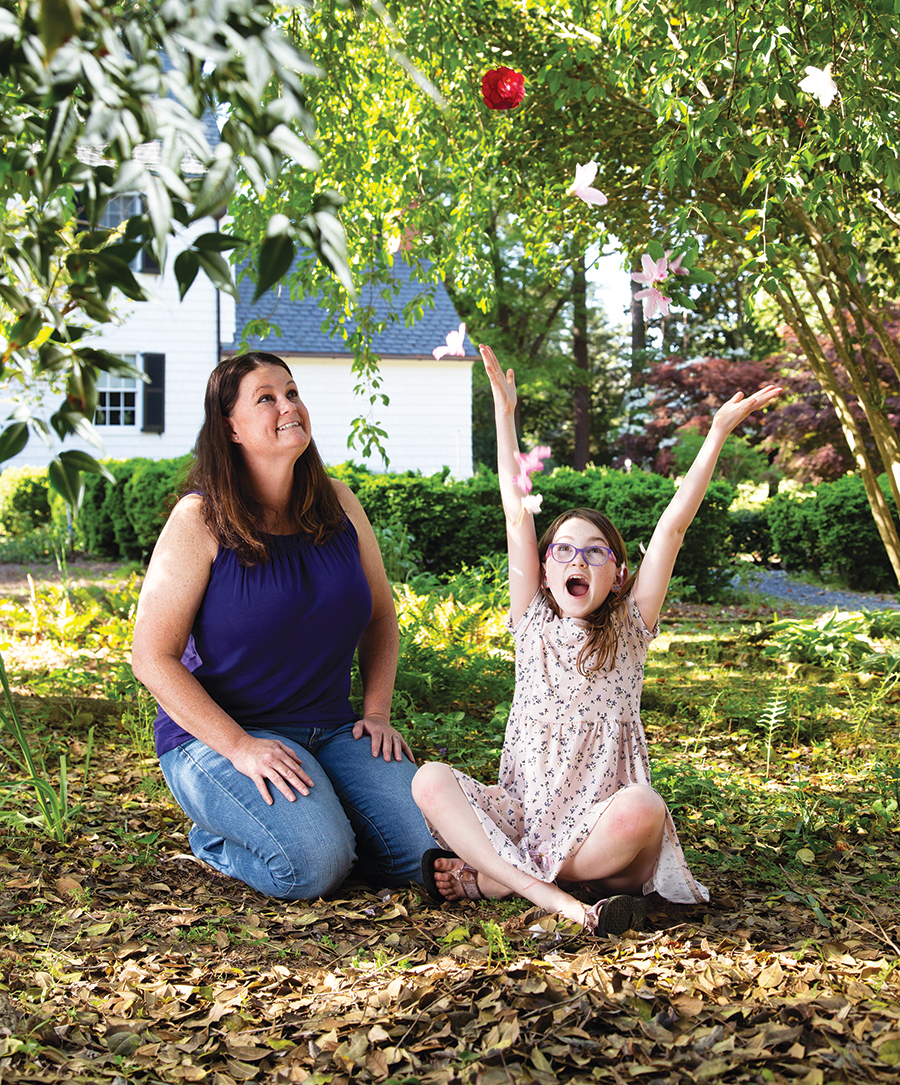 About 13 years ago, LeAnn Bailey closed her eyes, jabbed her finger at a map and happened to hit North Carolina. “I was finishing up my master’s degree in occupational therapy and had never lived outside of the state of Florida,” Bailey says. But because of that fateful jab, she met her husband while interning here in the Tar Heel State. Now years later, she works as an occupational therapist, driving daily to her patients in Moore’s surrounding counties, and goes home to a camper that she and her family are living in while their new house is being built in the Seven Lakes area. “I always thought I was a tiny living person like, ‘Oh, I can do that.’ I’ve learned very quickly now my life is not meant for tiny living. The 43-foot camper with three humans and two dogs gets a little . . . ” She laughs. Their 9-year-old daughter, Addie, has adjusted well to their interim housing. She seems to adjust well to anything; she just made friends with two kids while her mom was talking. “She doesn’t meet a stranger,” Bailey says. “She’s energetic. She is fun-loving, intelligent yet challenging at the same time, very intuitive.” She also likes to cheerlead and horseback ride. Addie runs over. “How would you describe your mom?” I ask her. “She’s really hardworking. She helps a lot of people, and I like it.”  PS