When the West Was Really Wild

We are left with apocryphal accounts that weaved and embedded themselves as facts. Yet, Bill was pretty much a straight shooter. In a freelance gig following the Civil War, he shot 4,382 buffalo to feed cross-country railroad workers, thus the “Buffalo Bill” moniker.

During the Civil War, Cody had served the Union Army routing out Confederate guerrillas. (Jesse James did the same thing for the Confederate Army, but there’s no record of Bill and Jesse ever bumping heads.) Cody earned the recognition and respect of his officers, and that would serve him well after the war.

One of those officers was George Armstrong Custer, for whom Cody served for a brief period as a civilian scout. Another was General Phil Sheridan, under whom Cody served as chief scout and engaged in 16 battles against American Indians, distinguishing himself in such a manner that President Ulysses S. Grant awarded Cody the Medal of Honor. One year after Cody’s death, the Medal of Honor Review Board revised the guidelines for receiving the medal to require recipients to have been members of the military. So, among other recipients, Cody’s medal was rescinded, as he had been a civilian scout, working for the military. President Ronald Reagan rebalanced the scales when he restored Cody’s medal in 1989.

And so, after all the treaties were broken, Buffalo Bill Cody did his bit to help confine the Indians that hadn’t died of gunshot, disease or broken heart to “reservations.” Here is what Cody had to say: “Every Indian outbreak that I have ever known has resulted from broken promises and broken treaties by the government.”

After the West was no longer wild, Cody took what was the Wild West to the western world — virtually all of America and, on eight separate trips, all over Europe. He did that from 1883 until 1913 in a show he put together called, ta da, the Wild West Show.

According to Legendsplay, the show’s cast and staff totaled 500-plus, and, of course, all manner of animals, including hundreds of horses and 30 buffalo. Along with people and animals went grandstand seating, with canvas covering for 20,000 spectators. The show generated its own electricity and had its own fire department.

Cast, staff and animals had to be fed and provided places to sleep. Travel was by train, which in one year covered over 11,000 miles in 200 days, giving 341 performances in 132 cities (including Charlotte, North Carolina) across the United States. Daily expenses were about $4,000 ($91,000 and change in 2019 money). Cody insisted that all, including women and Indians, receive equal pay. 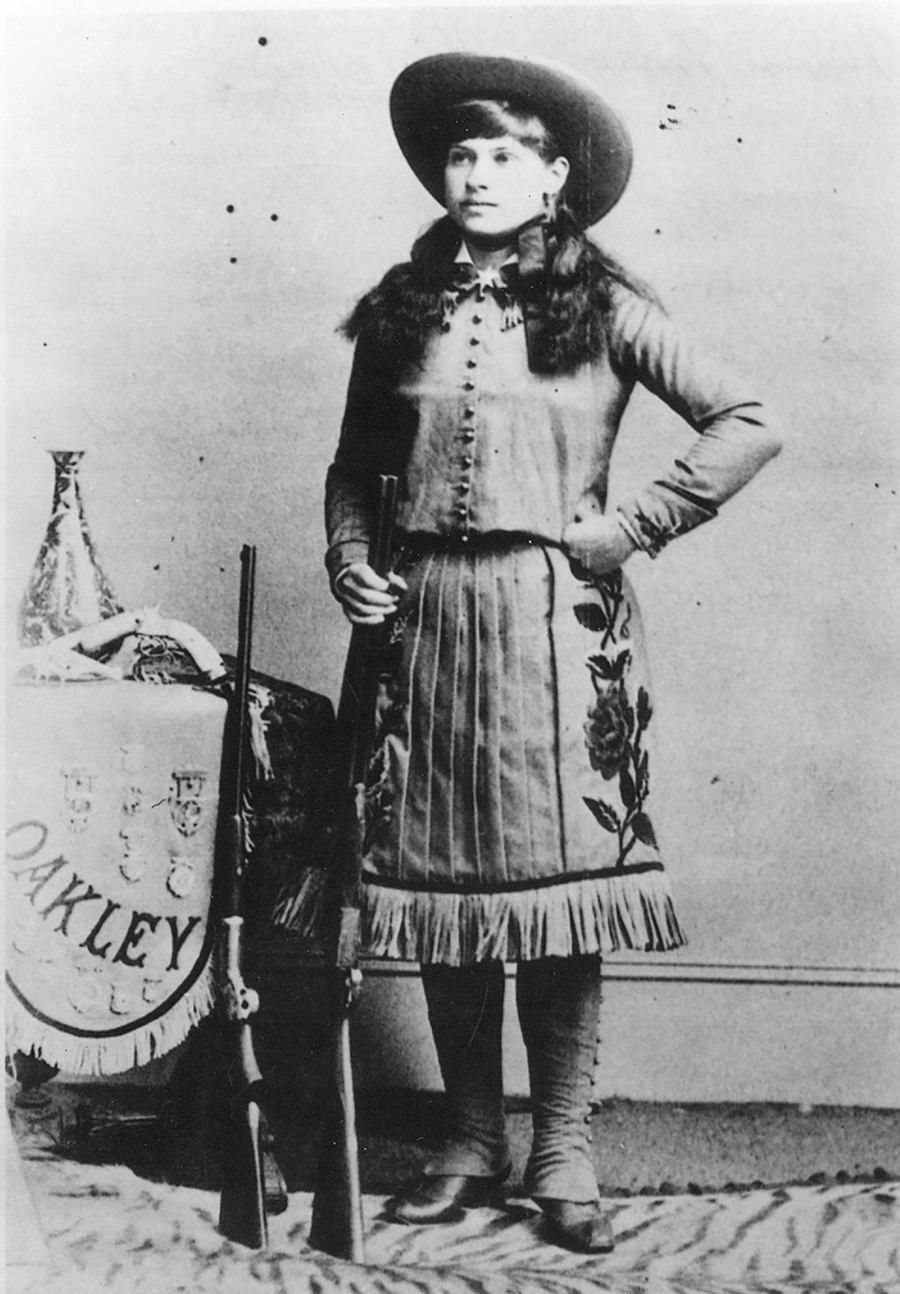 The logistics of keeping things together, planning for the next location, paying, feeding, etc., were mind-boggling. And while Buffalo Bill Cody was an excellent showman with a reputation that attracted folks like Annie Oakley, Lillian Smith, Sitting Bull and Calamity Jane, Cody was a dud at logistics. For that, he took a silent partner, named Nate Salsbury.

Salsbury was a recognized logistical genius at organizing large productions, and for as long as he lived, Cody prospered. But Salsbury’s death in 1902 marked the beginning of the road toward the show’s 1913 bankruptcy and Cody’s own death in 1917.

Salsbury maintained manuscripts on his relationship with Cody. They provide interesting insight into Cody’s character, at least according to Salsbury. In manuscripts housed in Yale University’s library, Salsbury characterized Cody as “a dishonest drunkard whose only loyalty was to his incompetent cronies.”

In Historynet.com we find Salsbury’s account of Cody’s conduct on a European trip where, returning from a visit to the home of a dignitary, Cody was so besotted, “he could hardly get into his carriage, with a lady who was manifestly not Mrs. Cody.” (After the Civil War Cody had married Louisa Frederici.)

Yet crowds couldn’t get enough of Cody. According to one newspaper, he had pitch black eyes, flowing hair, and an impressive mustache: “Everybody is of the opinion that he is altogether the handsomest man they have ever seen.”

There were few forms of entertainment in those days, and Cody’s Wild West Show strove to fill that gap. There were re-enactments of historical events, e.g., Custer’s Last Stand, rodeos, shooting competitions, bronco busting, horse racing, buffalo hunts and the like. In a word — huge! 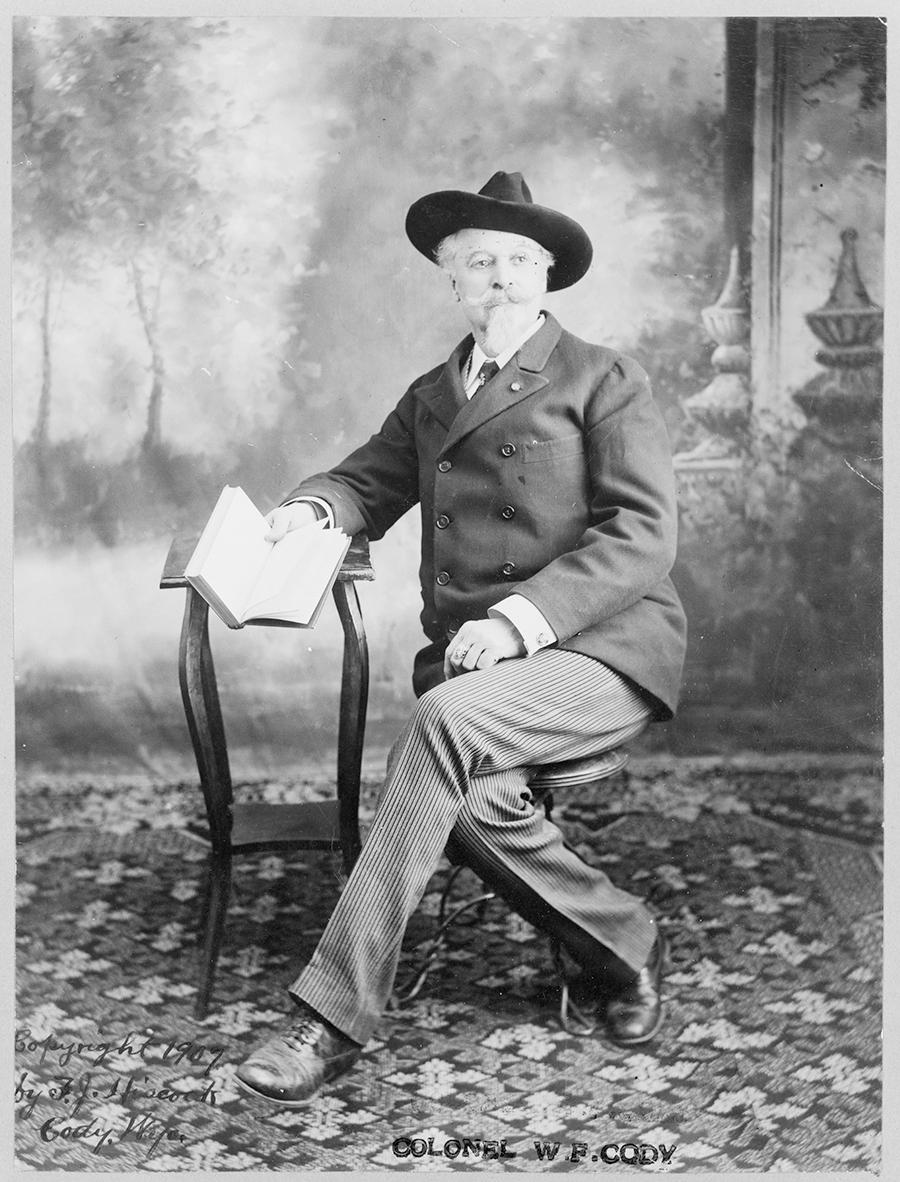 The biggest crowd-pleaser (and money-maker), though, was diminutive Phoebe Ann Moses, aka Annie Oakley, who probably took her stage name from the town of Oakley in Ohio, her home state. Five-foor-tall Annie and show-shooter husband Frank Butler joined the show two years after it began. Annie was such an instant sensation that Frank stopped performing and began serving as Annie’s manager.

Shooting matches and events in those days were enormously popular, and that’s precisely where Annie shone the brightest. But then Lillian Smith came on the scene. Lillian, a California shooting star, was as brassy and devoid of formality as you’d expect a Californian to be. And not given to understatement, upon first arriving at the show, Lillian told the press to forget about the competition: “Annie is done for.”

That sort of trash talk failed to play well with Annie, creating bad blood from the get-go. Lillian did, in fact, challenge Annie’s shooting prowess. Yet the persona contrast was the thing. Annie was conservative, formal and married. Lillian was flashy, flirty, used coarse language, and worst of all, she was younger than Annie. Aware that the press gave younger shooting contestants better press, Annie, born in 1860, somehow became Annie born in 1866, tightening the age gap with Lillian.

One of the show’s European tours illustrates well the distinction between the two. When the show performed in England before Queen Victoria, Annie curtsied politely and addressed the queen properly. Lillian, on the other hand, made a half-curtsy and fell right in chatting with the queen as if they were old chums catching up on old times.

Annie found Lillian a tart. Fact is, Lillian did leave a bit of a trail. First, she secretly married Jim “Kidd” Willoughby, which abruptly ended when her dalliance with half-Caucasian, half-Indian Bill Cook came to light. Then came a new marriage partner, saloon owner Theodore Powell. Next up, lawman Frank Hafley. Lillian then unmarried Hafley and married Wayne Beasley. And finally — well, finally, as far as we know — she got rid of Wayne and married German-born Emil Lenders, who additionally had a wife and child back in Philadelphia. 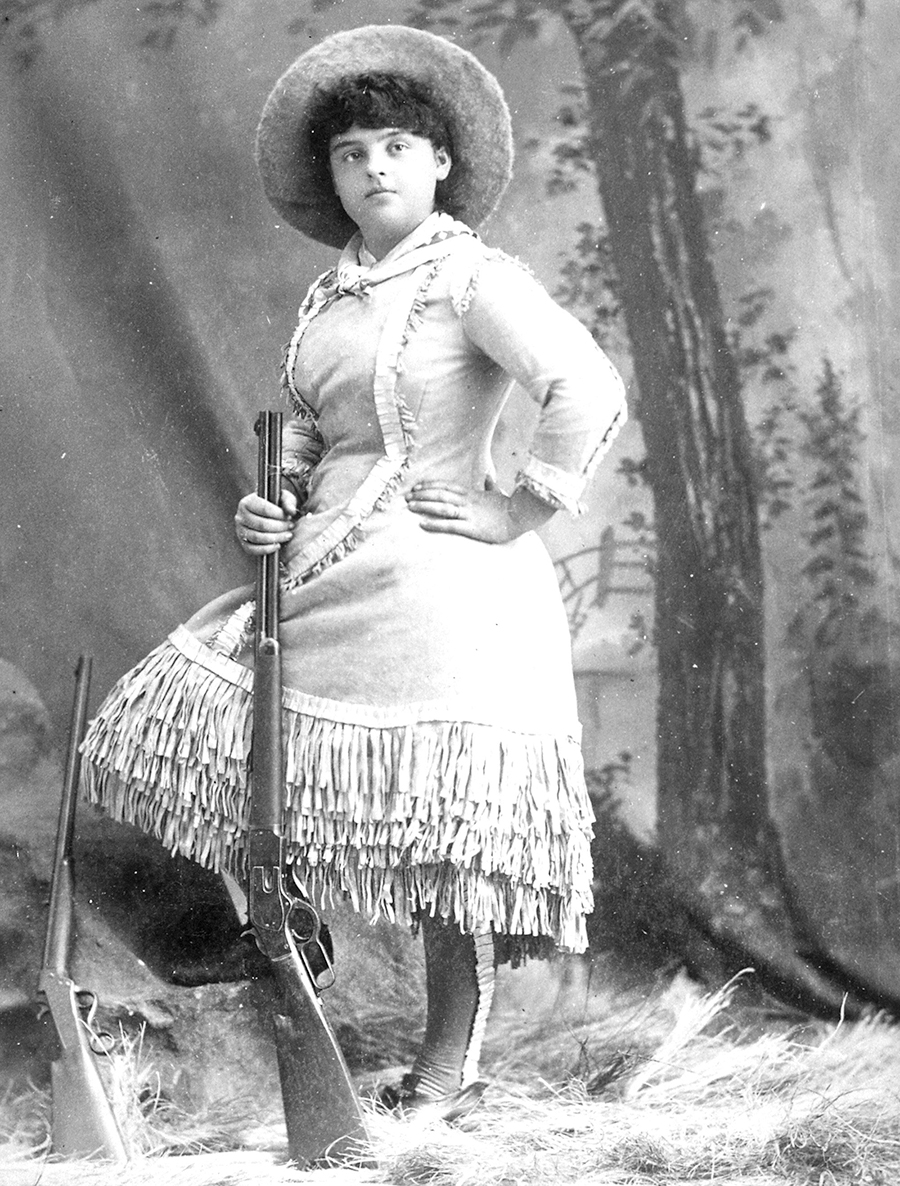 On returning from the European tour where they met the queen, tension between Annie and Lillian had grown so that Annie and Frank quit the Wild West Show. Then, for whatever reason, Lillian quit, so Annie and Frank rejoined Cody.

Lillian set about transforming herself into an American Indian princess. Princess Wenona darkened her skin, wore only Indian clothes, and joined Pawnee Bill’s Wild West Show. Some accounts indicate that she actually came to honestly believe she was a true Indian princess.

While married to Emil Lenders, she moved to Bliss, Oklahoma. But Lenders soon left and moved to Ponca City, about 15 miles away. For Lillian, it marked the start of a downhill trip to oblivion.

Historynet.com says “Lillian continued to care for her dogs and chickens and became a familiar sight in Marland and Ponca City, shuffling along on foot or riding in an old buggy with some of her faithful hounds trailing behind.” Princess Wenona died dead broke in 1930. She had requested to be buried in her Indian clothes. The good people of Ponca City complied.

Shortly after a devastating head-on train wreck in October 1901 involving Cody’s Wild West Show, Annie retired from the troupe. She spent the next few years giving solo exhibitions, including one in Pinehurst in 1908. The Butlers began wintering at the Carolina Hotel in 1915, quickly becoming the toast of the village. “In the gun room or on the sunny terrace they talked about guns, golf and game birds with John Philip Sousa, John Bassett Moore, Walter Hines Page, John D. Rockefeller,” wrote Oakley biographer Walter Havinghurst. 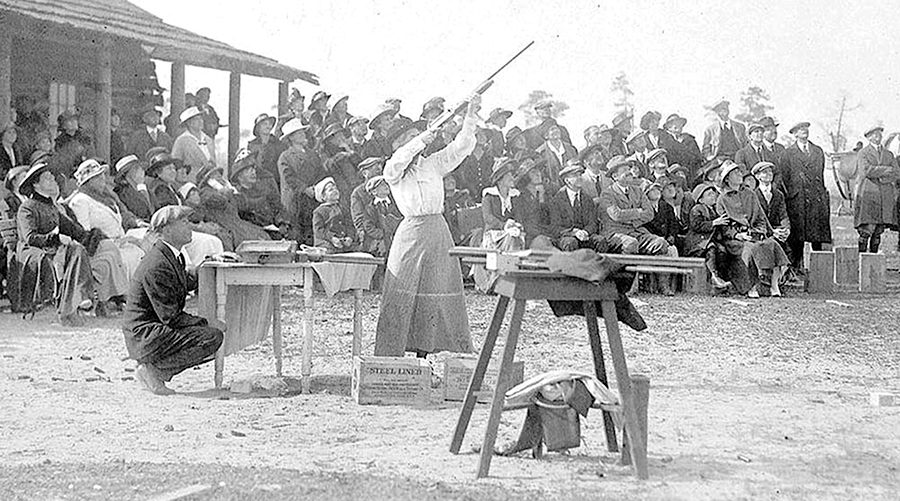 In the autumn of 1922 the Butlers were involved in a car accident near Daytona, Florida. Annie’s hip was crushed, forcing her to wear a leg brace for the remainder of her life. She never returned to Pinehurst, moving instead to a niece’s farm in Greenville, Ohio. She passed away in 1926. Leonard Tufts saw her obituary and immediately wrote to Frank, “I have just learned from the morning paper of the death of Mrs. Butler in Greenville, Ohio, and I am sincerely sorry to learn of this sad event. Annie Oakley’s memory will always be a kindly one to us at Pinehurst, and we feel that we are better for having known her.” Frank died 17 days after Annie. They were buried side by side in Greenville.

As for Cody’s Wild West Show, silent movies and then “talkies” were all the rage, and somehow Indians and cowboys seemed more real on the screen than up close. Bill tried to hang on by adding this and that — particularly different types of horsemen: South American gauchos, Arabs, Mongols and Turks, etc. But it was no good. The West had become yesterday’s news and Bill did, too, passing away at age 70 at his sister May’s home in Denver, Colorado.   PS