When New is Old Again

Living Good in This Hood

The Cottages on May is a concept development whose concept follows trends identified as new urbanism or urban redevelopment: living near downtown where services are within walking or bike range and neighbors within waving distance. Nobody narrates it better than Tim Venjohn, a South Dakotan who discovered Southern Pines while stationed at Fort Bragg. Now a Realtor working with designer Travis Greene of Legacy Home Construction, his explanation rings true:

“Ten years ago, everybody was building modern houses — but Southern Pines is a bunch of old cottages. We decided to design houses to fit the neighborhood, to look 80 years old like the houses on either side.” While such a cottage was under construction, Tim got a call confirming their success. “Somebody asked about that old house we were ‘remodeling.’”

After building about 20 cottages in the historic district bordering Weymouth why not reproduce an entire neighborhood?

Sounds good, if a bit risky.

The tract on May Street seemed perfect; its depth allowed walking trails that connect with downtown residential streets. Its location attracted Fort Bragg commuters. Some architecture reproduced existing one and two-story houses of an earlier era. Others featured a chimney, built for esthetic purposes only, and open rafter tails.

“We really had fun doing this,” Venjohn says. “It was a culmination of an idea.”

Small(ish) houses on modest lots, creative floor plans, quality materials and finishing don’t come cheap. However, Legacy had no trouble finding buyers for both spec houses and larger ones built-to-order — if the buyer prefers.

Which these homeowners did.

Although a lifelong horsewoman, as evidenced by her equine art, Beth Busichio’s cottage, done primarily in crisp navy and white, appears nautical: “Clean and classic,” says the graphic designer experienced in staging houses for sale.

Beth, while living in Florida, heard about Southern Pines horse country, came for a visit and fell in love. “But I didn’t want a (gated) golf course community.” Instead, the youthful grandmother looked for “the feel of a town, a place with low maintenance and young neighbors.” She didn’t need a horse farm but wanted something close to the boarding barn she visits daily. 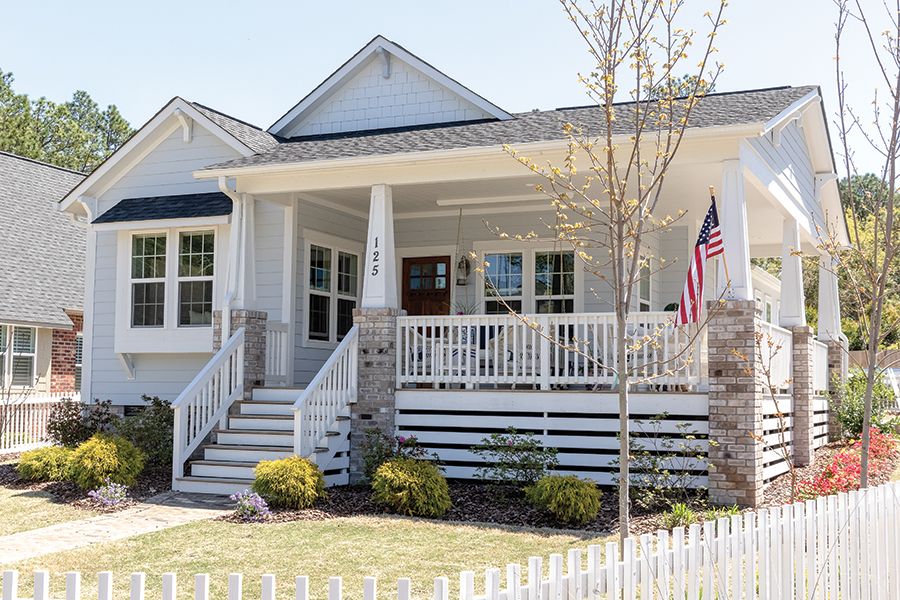 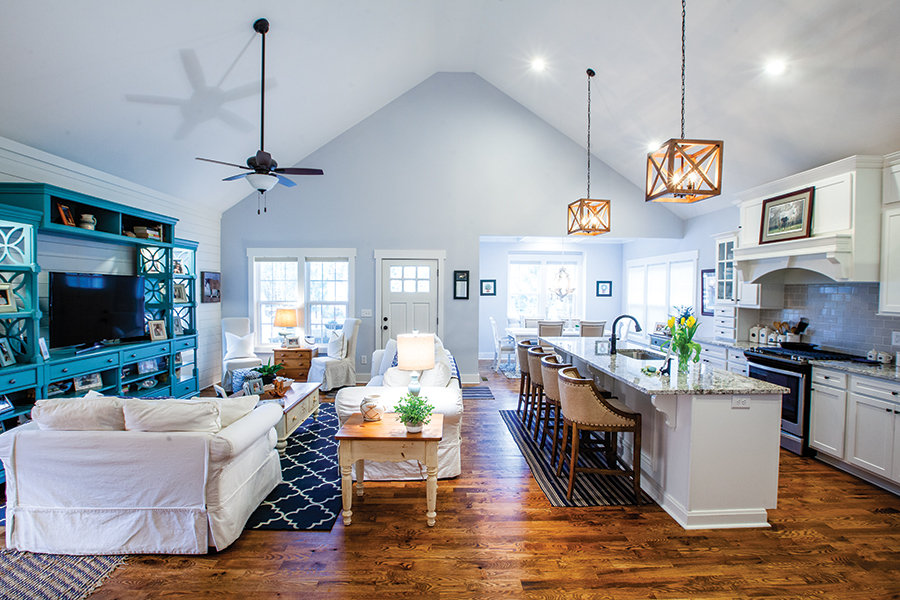 Beth found, but lost, a suitable house further south on May Street, also being developed by Legacy, which is how she learned of the new cottages.

Because hers was built to order, “I did a lot of tweaking.” The coffered ceilings, a hallway picture rail, beadboard, a mantle in the kitchen, vaulted ceiling and living room fireplace walled over to accommodate an entertainment unit give an illusion of a space larger than 1,800 sq. ft. The rough-hewn barn door separating living area from the bedrooms adds “earthiness,” and is solid enough to be soundproof.

The parking area was adapted for a horse trailer. Other spaces were designed around Beth’s furniture, much of it painted white, or shaggy-chic upholstery. Together, they are a page from Wayfair, her favorite source. She chose louvers for the windows, reminiscent of jalousies popular in Florida. Throw pillows, her décor insignia, are everywhere.

Porthole windows in the master bedroom, which she admits is a little tight, mean morewall space for paintings and family photos. 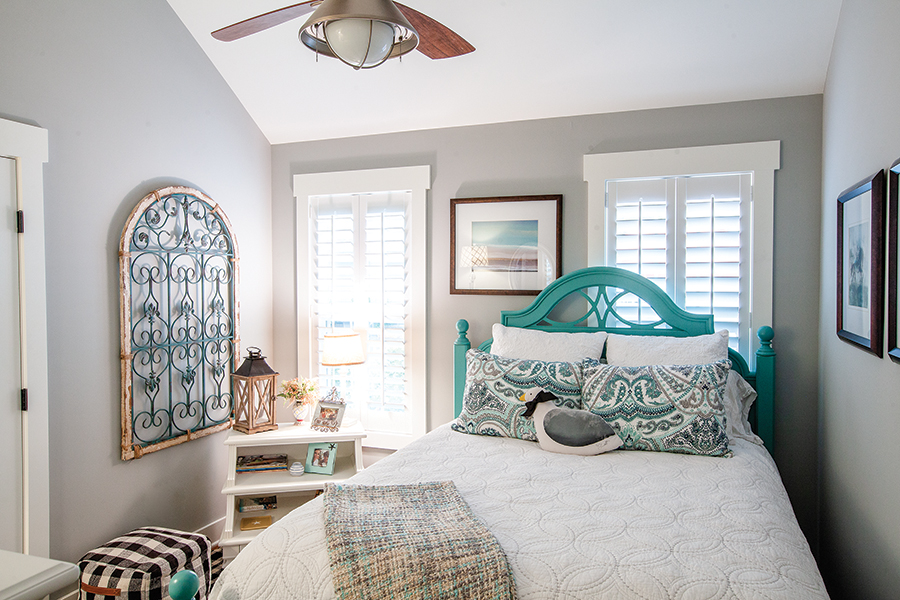 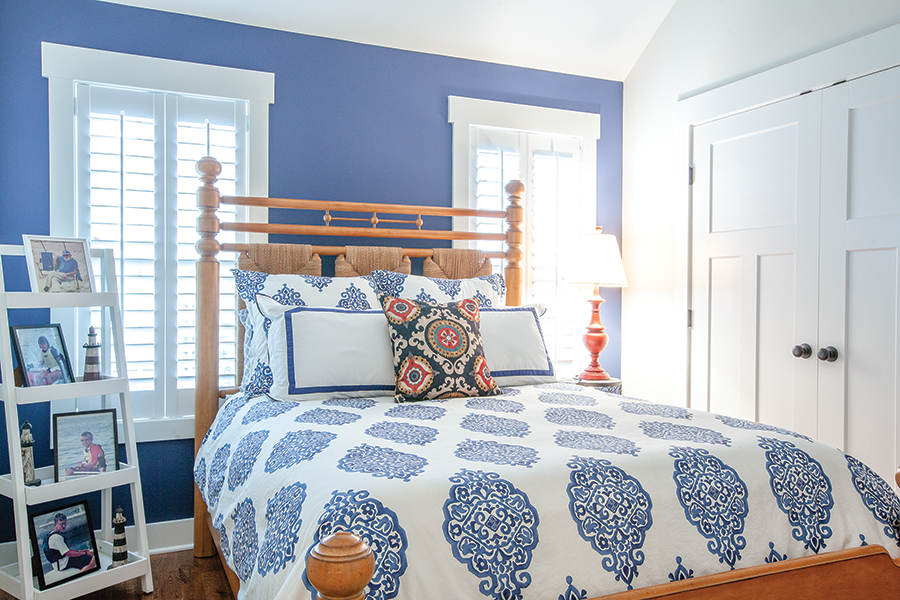 Beth wanted a corner lot to accommodate a wraparound porch, with fireplace. Here, she sits with Panda, her fluffy Australian sheep dog, and watches neighborhood action.

“I love-love-love this house,” Beth says enthusiastically. “It has such a fresh, light feeling.”

Ashley Holderfield is also a designer with a black and white fluffy puppy who lives at The Cottages on May. There, the comparison ends. She and husband Casey Holderfield now occupy a second neo-classic cottage built by Legacy. Their first house was on East Maine St. in the desirable Southern Pines district above the tracks. Its floorplan and giant porch were similar to Beth Busichio’s but in dark woods with earthy brown and forest greens. But in 2016, after only a few years and one baby, the cottage seemed small. 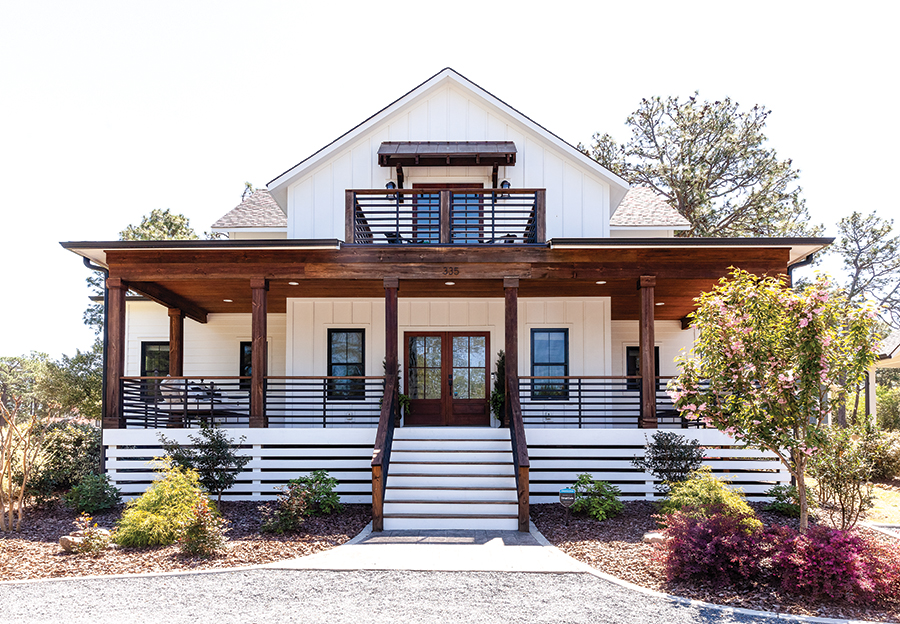 “I loved living downtown but I wanted more of a yard,” Ashley says.

“We looked in Pinehurst but loved Southern Pines where you can walk or bike downtown,” Casey adds.

They already knew Tim and Travis — and decided to investigate the high end of the concept.

What sold them was the lot bordering a pasture with open spaces beyond, a forever view. Here, they conceived what Ashley calls a modern two-story farmhouse with circular driveway, a Juliet balcony and industrial décor carried out in white, grey, black. 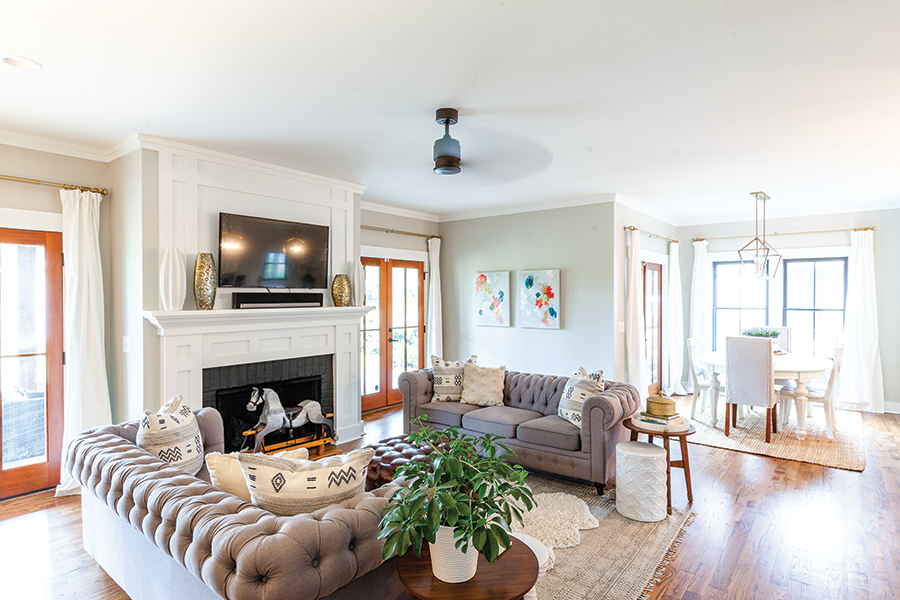 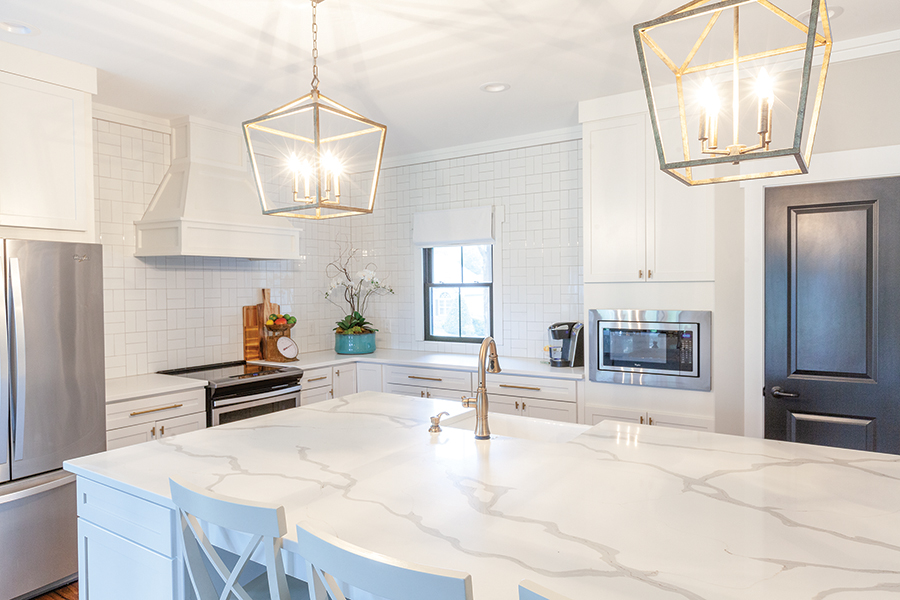 “Notice that there aren’t any edges” on furniture or surfaces — a safety measure — Casey points out. Almost all the furniture and fabrics are new, in gradations of that industrial gray palette, including tufted sofas and a round leather ottoman replacing a coffee table. Notice, too, that the enormous white quartz island separating the stark white kitchen with ceramic tile backsplash laid in a “subway” pattern would never be found in a mid-20th century Carolina farmhouse. Nor would the metallic gold and silver fixtures. Certainly not the horizontal cable wiring replacing balusters on the stairway. Or the front door paneled in rain glass which admits light but distorts the view.

Separate dining rooms are phasing out, they noticed. Instead, a small corner of the open kitchen accommodates an oval hardwood table found at Habitat and painted white.

Farmhouse or not, the uncluttered visuals are not only stunning, but suited to a young family seeking togetherness in open spaces.

Equally iconoclastic is the layout with master suite and enormous bathroom with walk-in (no door) shower on the main floor. Toys are confined to an upstairs playroom, near the children’s bedrooms, with an office nook where Ashley can work with one eye on them. Throughout, white walls backdrop modern art by Ashley’s classmate, Lindsey Lindquist. 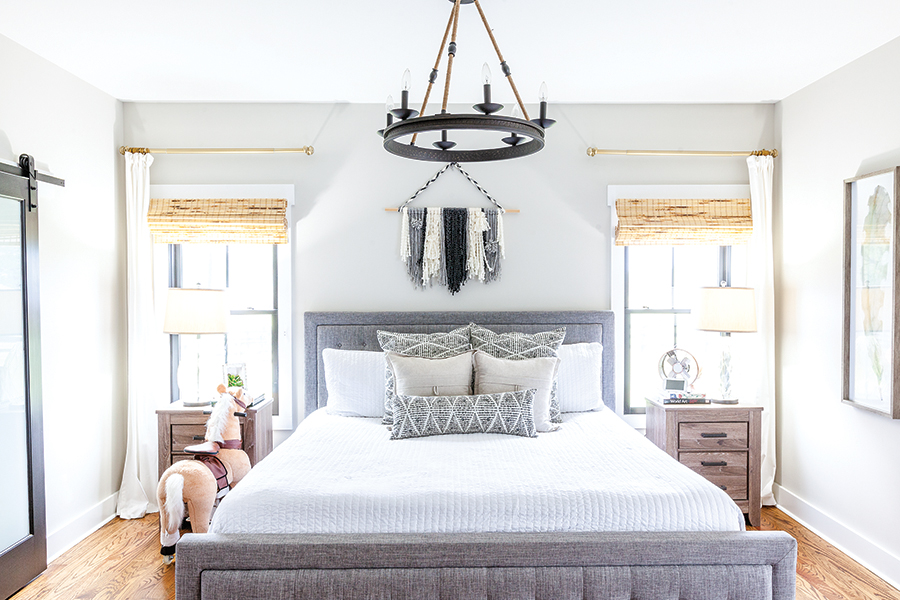 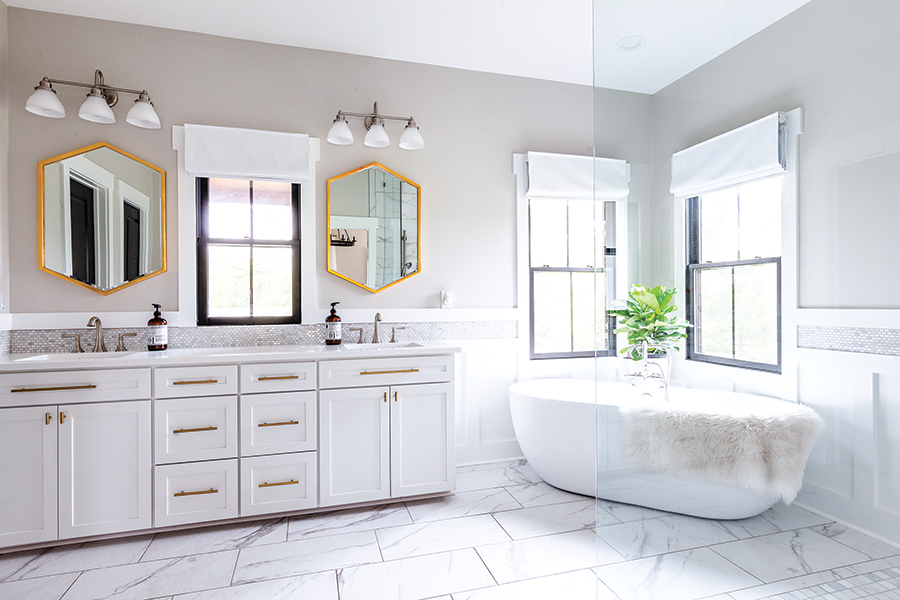 The Holderfields have chosen to use their heated, air-conditioned carriage house for fitness equipment and storage. The covered back gallery running the width of the house has a wood-burning fireplace and, over it, a wall-mounted TV. Evie can feed somebody else’s horses through the fence.

Ashley wanted a modern farmhouse that fit the equestrian landscape.

Both sought unobstructed views in a quasi-rural neighborhood close to downtown.

This was a one-in-a-million find, they agree.

The Holderfield home may not conform exactly to Legacy’s cottages-of-yesteryear concept but, with all satisfied, nobody’s looking this gift horse in the mouth.  PS