The Madcap gents head for the hills

There’s a handful of rarefied American resorts that are spoken about in hushed terms. Among those are The Point in upstate New York, Vermont’s Twin Farms, and San Ysidro Ranch on the California coast south of Santa Barbara. Blackberry Farm, tucked into the rolling hills and mountains of eastern Tennessee, also appears on that coveted, in-the-know list with breathy nods to the estate’s culinary prowess, superlative spa treatments, impressive wine list, and themed escapes built around literary and fashion “activations.”

I have been lucky enough to visit “the Farm” and was impressed by the estate’s gastronomic glories and bucolic landscape, so I was excited to hear that the Blackberry team would be opening a new outpost up the road from the Farm and atop a nearby mountain named, predictably, Blackberry Mountain.

But let’s dive deep: As you follow the directions from the main highway through Walland, Tennessee — about a 4 1/2-hour drive from the Triad — you might ask, as I did, “Er, did we miss something?”

“Deliverance,” my partner, John, said. But then you turn onto a newly asphalted road, and that seems encouraging. We drove past the vaguely Druidic gatepost emblazoned with an artistic “M” twice before realizing that we had gone too far. Back on track, we rounded a corner to the property’s actual gates, where we announced ourselves via intercom and were buzzed in. 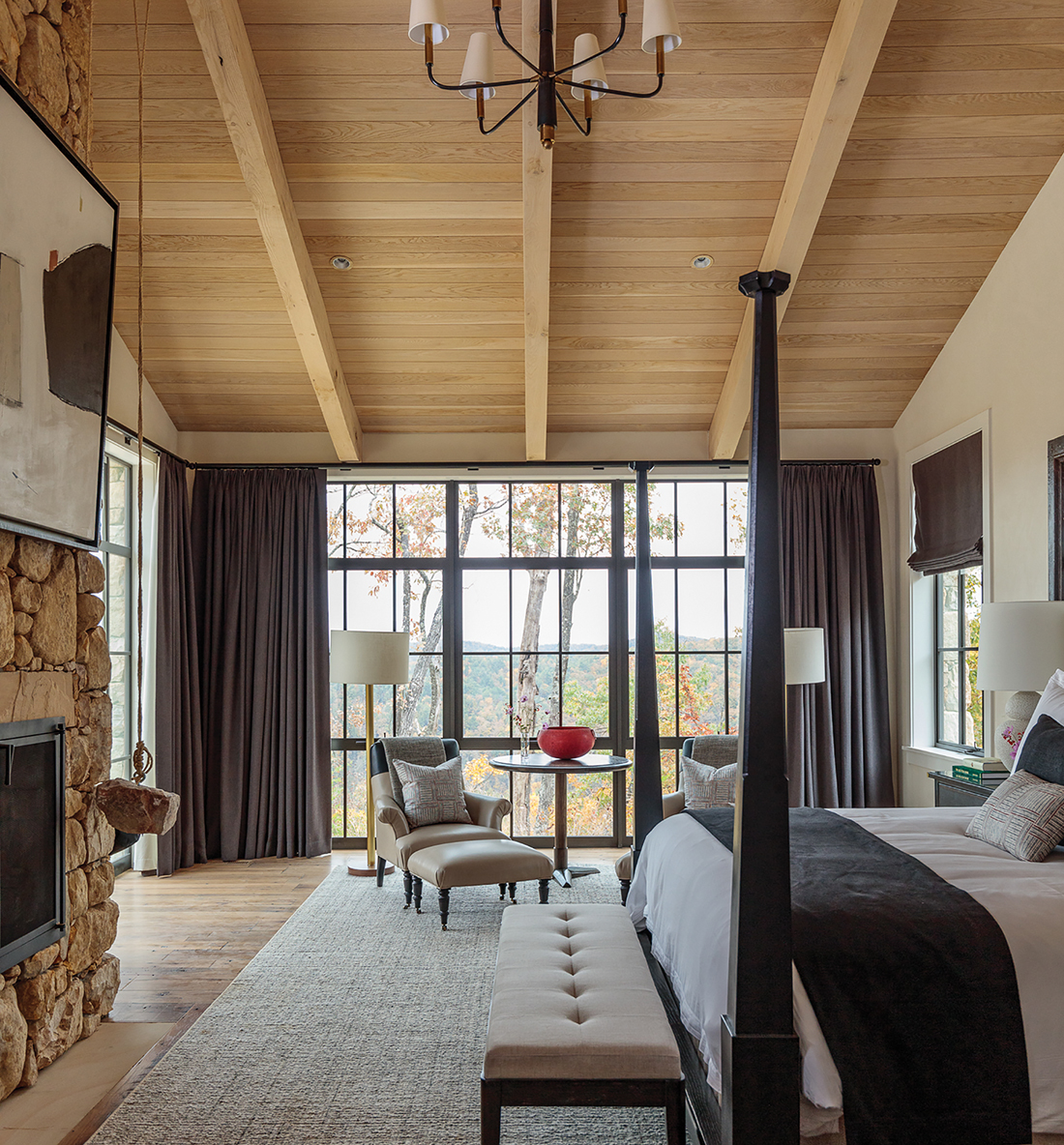 And then we got lost again at a junction as we traveled up and up the mountain. “Just like camp,” John observed. “We need a map.” A few turns past the many homes being constructed (the Mountain is mixed use in its focus — resort meets second, third and fourth residences), and we arrived at the 5,200-acre property’s lobby-cum-bar/dining room, aka The Lodge. The views out toward the endless pine-shaded Great Smoky Mountains and the heated pool and spa lawn were breathtaking, and we lapped up the very calm interiors of the public spaces with the fire crackling merrily away in the bar.

We were ferried by Lexus up from The Lodge to our stone-clad cottage complete with sprawling bedroom, spa-like bathroom, and private terrace with fireplace. A golf cart sat charging beside the villa’s entrance that would allow us to travel up the mountain to locations such as the fitness center, aka The Hub, and Firetower — and, yes, it’s a hike uphill, so the golf cart certainly came in handy.

Settled into our neutral-hued (aka, beige) pitched-roof guest room, John and I set out to explore. A stay at the Mountain — unlike the Farm, which gears itself more to relaxation — revolves around things to do. Or as the resort refers to the post-reveille run sheet, “active adventure.”

“Have fun with that, I plan on sleeping,” commented John. “If I have to be curious, is there room service and a sauna and Turner Classics on the TV?”

And so I was left on my own to channel an inner “curiosity.” I skipped the Japanese pottery class — something called “raku” — but did try the Sound Bathing treatment, and that left me a bit perplexed. There were lots of musical instruments and singing, I think. Maybe a gong and a zither. I felt like I had attended a Sarah McLachlan concert, albeit supine. But then I didn’t like the bizarre “equine therapy” I tried at another retreat either, so maybe it’s me.

Would I care to do a spin class? Or any of the myriad exercise classes, yoga, spa treatments, workshops, painting classes, and hiking trails and so much more?

I do too much of too much in my daily life. Well, maybe not the gong playing. Or the raku. 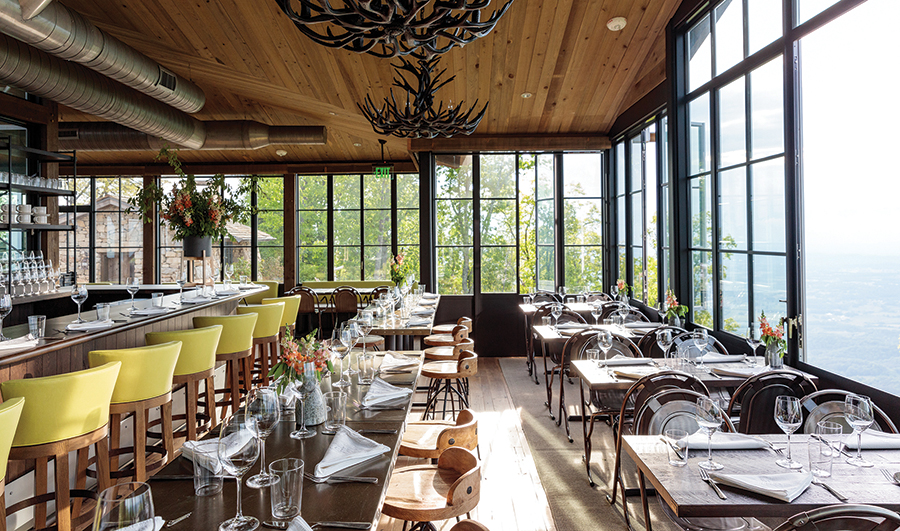 Instead, I created my own version of “active adventure.” I luxuriated with a perfect martini in The Lodge surrounded by a heap of magazines beside the fire before enjoying the hot tub in a natty Orlebar Brown bathing costume depicting James Bond.

But maybe I wasn’t being a good sport.

I recalibrated and tried to fit in. I donned head-to-ankle organic Lululemon and generic Allbirds.

“You look like a trustafarian from Venice Beach,” John commented, whilst dialing up for bubble bath and ice. “Very Abbot Kinney.”

Still, I tried. In my own way.

“Where’s the spa?” I trilled. “A farm-to-table pedicure, perhaps?”

“And is there a mixology class at the bar? With complimentary nibbles . . . ”

We lapped up two inspired dinners at the Three Sisters restaurant and hiked a bit and took the golf cart to lunch at the Firetower, where John and I savored the eye-popping views. I took part in a cooking demonstration and felt like Ina Garten for about an hour.

John slept in, and we ran amok with the golf cart and Instagram TV-ed the whole thing. Frankly, the golf cart was our favorite active adventure. Brilliant.

I considered a yoga class.

And thought about Pilates.

And I have no idea what happens in a “movement studio” and don’t want to know.

Happily, there were s’mores that evening by our fire.

What I realized was that my interest in camp-like activities ended at about age 14 in tandem with the demise of The Go-Go’s and my plaid Swatch. If I have to be active, I want to bike through Provence or hike Sicily. And if I am curious, it’s about art-house films, museums, and famous gardens. Although I do like a good lanyard.

Sigh. I guess I am the wrong demographic.

Get me to the Farm.

So this bad camper ordered another martini and sat back to enjoy the postcard-perfect vista and wait for the internal dinner bell.  PS

In their debut travel column, the Madcap Cottage gents, John Loecke and Jason Oliver Nixon, embrace the new reality of COVID-friendly travel — heaps of road trips. To kick off the festivities, the gents pile into their Subaru and set off for the recently opened Blackberry Mountain (see blackberrymountain.com), the adventure-geared sister to Tennessee’s fabled Blackberry Farm.