View from the Tower

Judy Rankin reflects on golf, the Bells and Pine Needles

That’s why when you ask Rankin where she lives, she says, “I wish I knew.”

One thing helps the miles roll away: an apple fritter and a cup of black coffee.

Rankin, 77, is an elemental thread in the fabric of American golf, her success as a player followed by a nearly 40-year broadcasting career, setting her apart in a game made better by her contributions. Through grit and grace, Rankin had a Hall of Fame playing career, then enhanced it through her television work, sharing the gospel of golf in her comfortable and enlightening way.

When the U.S. Women’s Open is played in early June at Pine Needles Lodge and Golf Club, part of what the championship has become is because of Rankin and what she has done for the game. She is a living example of leaving something (in this case, golf) better than she found it.

Rankin also has a history with Pine Needles, which is hosting its fourth Women’s Open, but that doesn’t make her unusual. Almost everyone who came across the late, great Peggy Kirk Bell and her husband, Warren “Bullet” Bell, were left with a piece of the place and its people. Pine Needles is not just a destination, it’s a state of mind. That’s the lingering influence of Bell and her husband, an enduring legacy embraced and nurtured by their children and their families.

“There was something about Peggy,” Rankin says. “She was a magnet with people. There was a way about her.

“She was never a big, affectionate hugger, but she was affectionate in her way. I don’t know how you couldn’t like Peggy. She was such a wonderful role model for so many different things in the game. I admired her a lot.”

Whether Bell was cruising through the pine-shrouded streets in her authentic London taxi, her 1928 Model A convertible or her 1964 Lincoln Continental — just to name a few — or giving impromptu lessons to guests having a meal at Pine Needles (Bell often wore a golf glove inside to make a teaching point), she was a force of nature, and the Women’s Opens played at Pine Needles are a nod to her as much as they are to the Donald Ross design hosting the championship.

Bell’s only major championship victory came in the 1949 Titleholders, a tournament that was played for the final time in 1972 — at Pine Needles. Sandra Palmer beat Rankin and Mickey Wright, and the memory remains with Rankin.

“I think Bullet had it in for us because they made us play from so far back,” Rankin says. “The golf course was so long. That’s what I mostly remember. We swore on the 18th tee he had the markers back so far that your right foot was on a downslope. That became part of the lore.”

Rankin was an exceptional player, earning low amateur honors as a 15-year-old in the 1960 U.S. Women’s Open and a year later landing on the cover of Sports Illustrated magazine.

She won 26 times on the LPGA Tour and, in the process, became the first player to win $100,000 in a season. Rankin was named player of the year twice and three times won the Vare Trophy for lowest scoring average. She has been the captain of two U.S. Solheim Cup teams, both victorious, and was inducted into the World Golf Hall of Fame in 2000. Her contributions to the game were recognized by the USGA when it presented her with the prestigious Bob Jones Award in 2002. 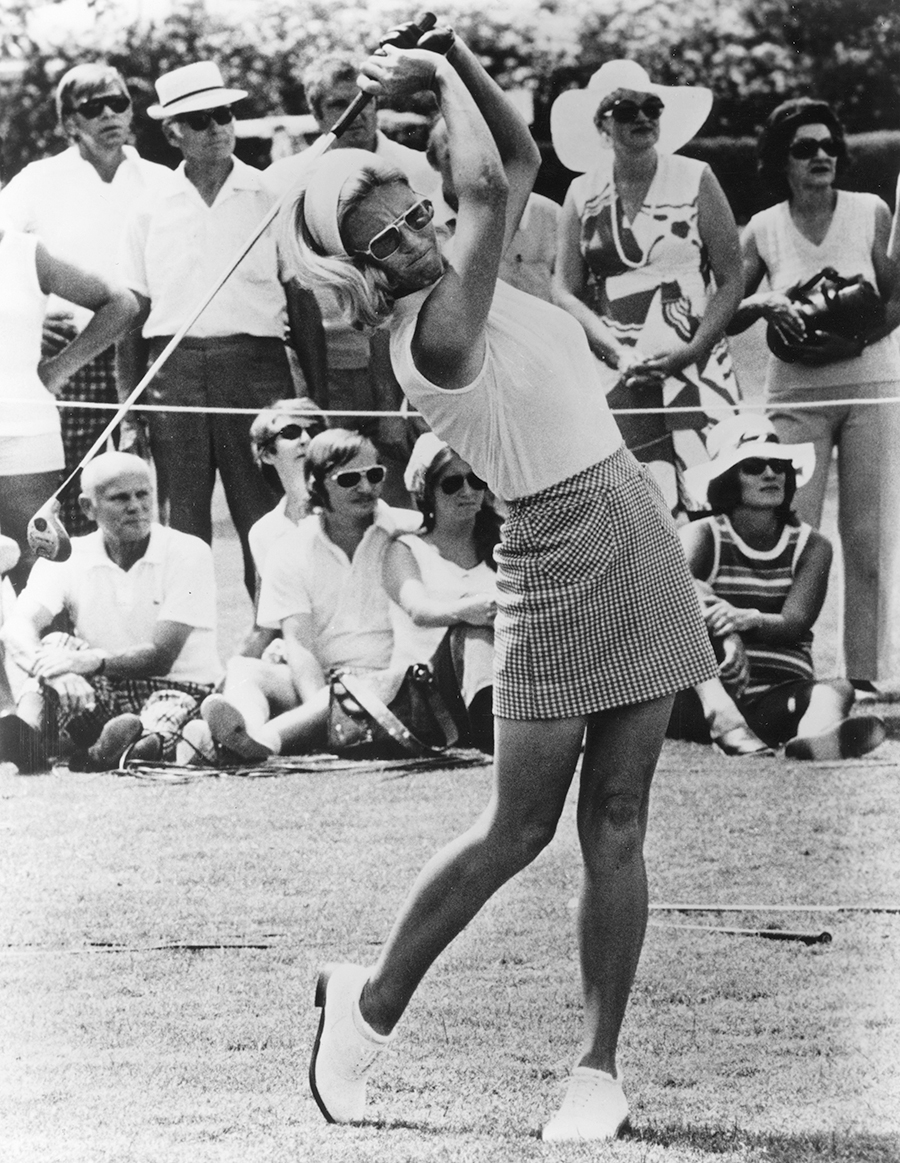 Since 1984, Rankin has been in the television booth, covering both men’s and women’s professional golf, earning a reputation as one of the best analysts in the business. It has allowed her to stay close to the game and appreciate its evolution.

“I think (women’s professional golf is) in the very best place it’s ever been. There have been years and periods of time when it was great, but right now it’s like their time has come,” Rankin says. “Along with that is an influx of a ridiculous level of talent and depth. Women’s golf is fortunate that people are now recognizing it. That’s the driving force.

“If you ever played at a high level you stand in awe at what some of the players today can do. I defy anybody to watch the Korda sisters (Jessica and Nelly) play golf and not walk away with their jaw dropped.”

Like seemingly everything else, golf has changed in recent years, and the women’s game is no exception. The LPGA Tour is truly global, and the introduction of the Augusta National Women’s Amateur was like a booster shot to an already growing portion of the game.

Distance is a primary determinant in the women’s game, just as it is for the men. Rankin says it’s basic math — the longer a player can hit it, the more advantage they have going into greens with shorter clubs.

That’s not all that matters, but it has shifted the dynamic in recent years. So has the way players approach the game today. They are better prepared physically, mentally and through technology.

“The best example is Augusta,” Rankin says. “I don’t know if 30 years ago players in the amateur ranks would have had the talent or the composure to go play some of their best golf at Augusta. We saw (Jennifer) Kupcho do it, and now this 16-year old (Anna Davis) lit it up. That’s the kind of difference in the game and the difference in the young golfers.

“Maybe more of them know where it is they want to go and what they want to do because of the success of the LPGA Tour. If you go back into my time, it was not a very reasonable thing to do to turn pro. A lot of that drive and a lot of that composure is due to the LPGA and its success. A lot of people have seen them, and it’s an attractive place to be.

“Instead of being intimidated, they are inspired.”

As Rankin rolls on toward Midland, her personal horizon has widened. When she called the Chevron Championship in early April — won by Kupcho — it was her final major championship in a television booth. She is scheduled to work three more events this year but beyond those, she has nothing planned.

Rankin plays a little golf these days, rarely more than nine holes. She recently underwent surgery on her left hand related to Dupuytren’s contraction, an affliction that required surgery in her right hand about 15 years ago.

“This was all my choice. The Golf Channel has been great to me,” Rankin says. “I don’t know what would be down the road next year, but if there is any work at all, it would be very little. I’m 77, so it’s time. I had 25 years or whatever on the PGA Tour and I feel a little bit like a historian for the LPGA Tour. I will stay close to it. Maybe I’ll do a few other things, I don’t know.

“I felt like the time was right and I haven’t really looked back.”

Not with the road between Lubbock and Midland in front of her.   PS

Ron Green Jr. is a Charlotte native and a senior writer for Global Golf Post. He’s covered the game for over 30 years.