A Fresh Take on Blackbeard the Pirate

It’s 1715, just off the colonial North Carolina coast. A sloop flying a black flag decorated with a horned skull approaches. At its helm: Blackbeard the pirate, a gruesome sight with smoke streaming from his braided hair and a severed head in his hands. His crew swings onto the deck, swords in hand, ready to strike down any other ship in their bloodthirsty, unrelenting quest for treasure.

According to North Carolina research historian Kevin Duffus, very little of that is true. “Most everything you’ve ever read about Blackbeard is wrong,” Duffus claims. Read on for clues to sort between the truths and tales of this famed pirate — and for ideas to get out and do some exploring for yourself.

An interview with a man who is on a mission to uncover the truth about Blackbeard. 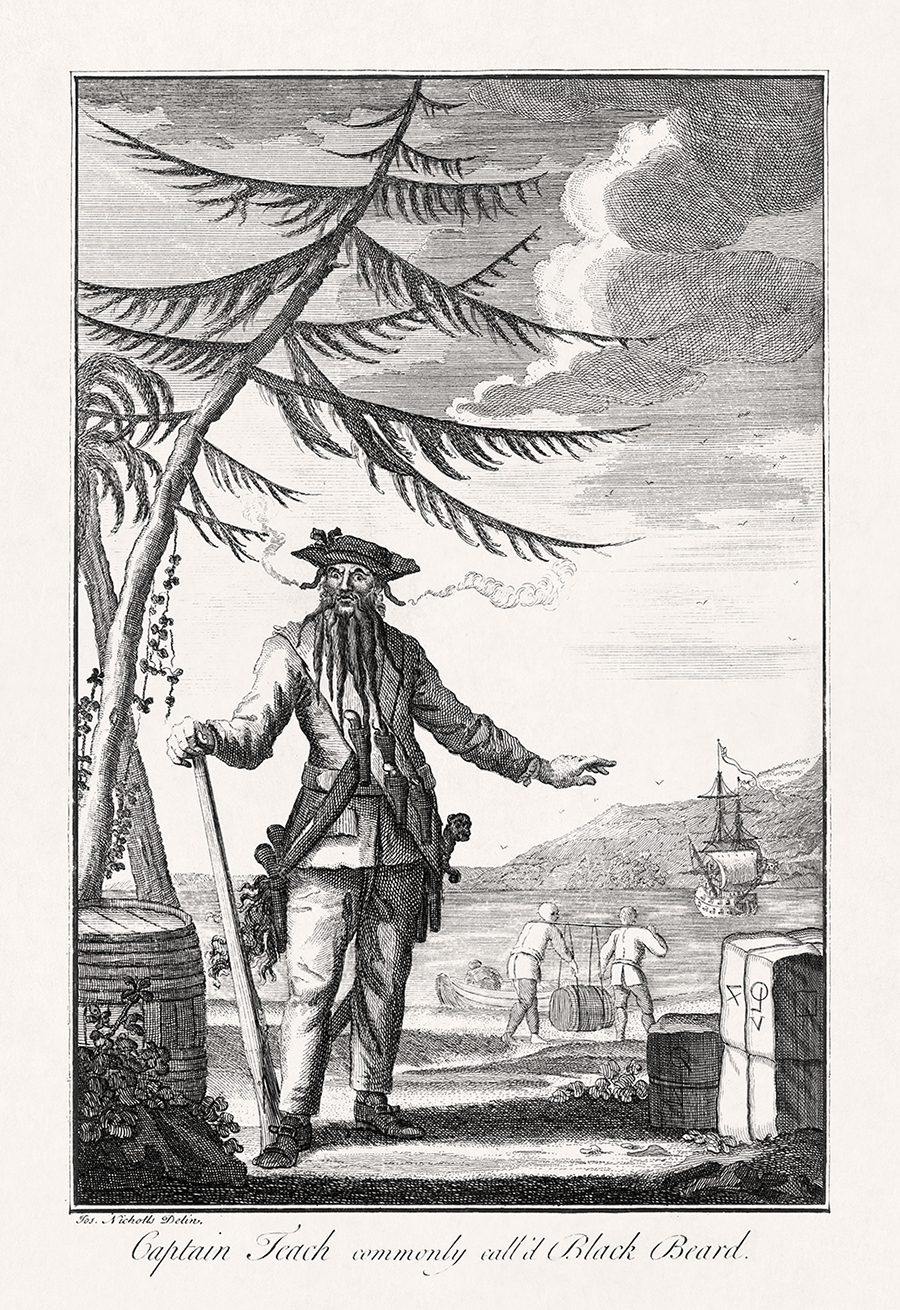 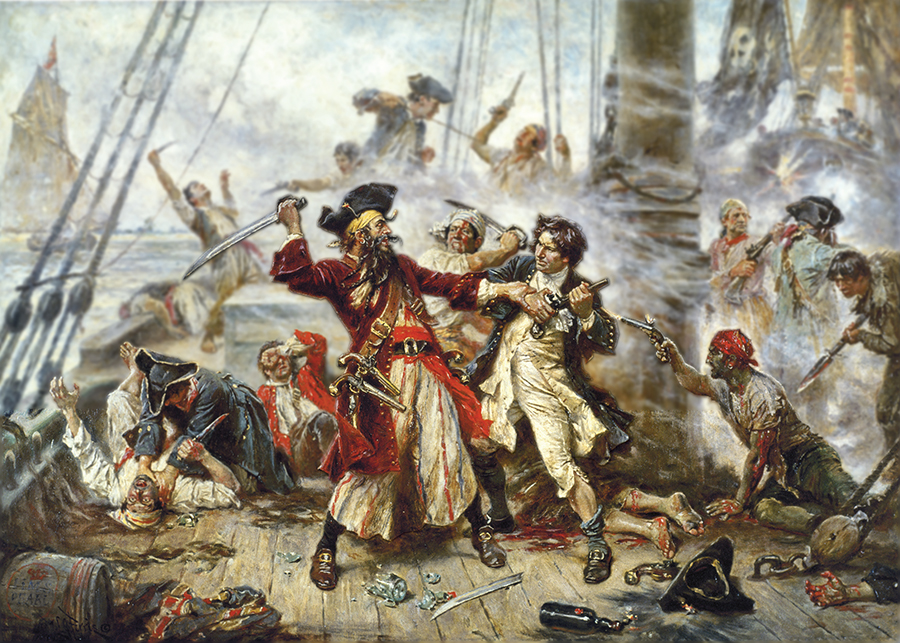 Kevin Duffus first became fascinated by pirates as a young boy, when he watched the 1968 film Blackbeard’s Ghost. “At the time I didn’t understand that history can be fictionalized — I was just so interested in this Blackbeard,” says Duffus. Shortly after, Duffus’ father, who was in the Air Force, was posted in Greenville, North Carolina. Duffus started researching the area’s history and discovered that the infamous character he’d seen in the movies had died not far away, in Ocracoke.

So, at 17, Duffus and two friends hopped on their bikes to visit the barrier island and experience the history for themselves. “It took us over two days to get there. That was the beginning of my quest to find Blackbeard,” Duffus says. He explored the coast, looking for the landscapes he saw in the film, like the high cliff where, in the movie, Blackbeard had built himself an inn from salvaged timber. But when Duffus asked locals at a community store where to find that cliff, “they said, son, the highest point here is only about 8 feet,” Duffus says. “I began to realize you shouldn’t learn history by watching movies.”

Since then, Duffus, a longtime television producer who now owns a production company focused on history and tourism, has logged thousands of hours conducting primary research on pirates, and on Blackbeard in particular. He spent a week in England’s National Archives, going through log books and correspondence of Royal Navy ships stationed in Virginia in the early 1700s. He has also done research on foot: He once discovered a grave, covered in vegetation, along the banks of the Tar River. “Even trusted institutions like museums and park services have helped to perpetuate the historical fraud of the legendary pirate,” Duffus says. “I’ve been working to winnow out all of the unsupported claims, to weed out the three centuries of myth and legend.”

In 2008, he published The Last Days of Black Beard the Pirate, which is now in its fourth edition and one of six books he’s authored about maritime history. In 2014, Duffus was honored as North Carolina Historian of the Year by the North Carolina Society of Historians. We spoke to Duffus to learn why he believes that Blackbeard’s story is more complicated — and more important to North Carolina’s history — than the popular narrative suggests. 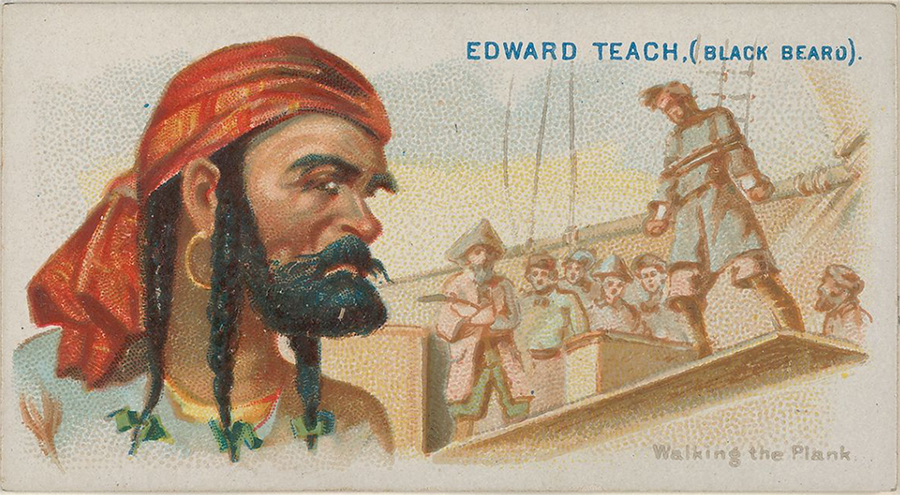 Blackbeard as depicted on an Allen & Ginter cigarette card.

You say pirates don’t match up with what many of us have in our heads — Why?

Pirates were indistinguishable from the rest of society. They dressed the same, they talked the same. There’s no such thing as pirate clothing, eye patches, earrings or tattoos — that’s been largely invented.

So often, popular culture portrays pirates as living in their own little world at sea, without the external events and forces that would have shaped real life. Blackbeard’s world was complicated. It involved wars between nations, economic distress, social stratification, legal irregularities and lost or destroyed official records. In Colonial America in the 1700s, the era considered the Great Age of Piracy, it was hard to establish a life. People who lived here would do whatever was necessary to survive.

Around the town of Bath, North Carolina, the years before Blackbeard became a pirate were marked by political discord, drought, famine and yellow fever. Often, a group of down-and-out sailors would set out by boat to raid a merchant’s vessel to quickly raise some funds. They’d fire a gun or cannon, then they’d raise the black flag signaling they were pirates; the merchant ship would typically be outnumbered and surrender. Battles and bloodshed were rare. Usually, these pirates would simply detain their victim’s vessel for an hour or two while they searched their cargo for valuables like food, wine and shoes.

So pirates were everyday people?

Yes, they were everyday mariners. It was a way to make some quick money, then return to your family and normal life. And there’s some gray area, too: Some professional mariners were privateers, which meant they were authorized to attack enemy ships. England was gearing up for war with Spain, so they’d enlist these mariners to do their work. There were no police, there was no one preventing this pirating from taking place, so there was no real danger of being caught. It became so popular that there are records of hundreds of men doing it. 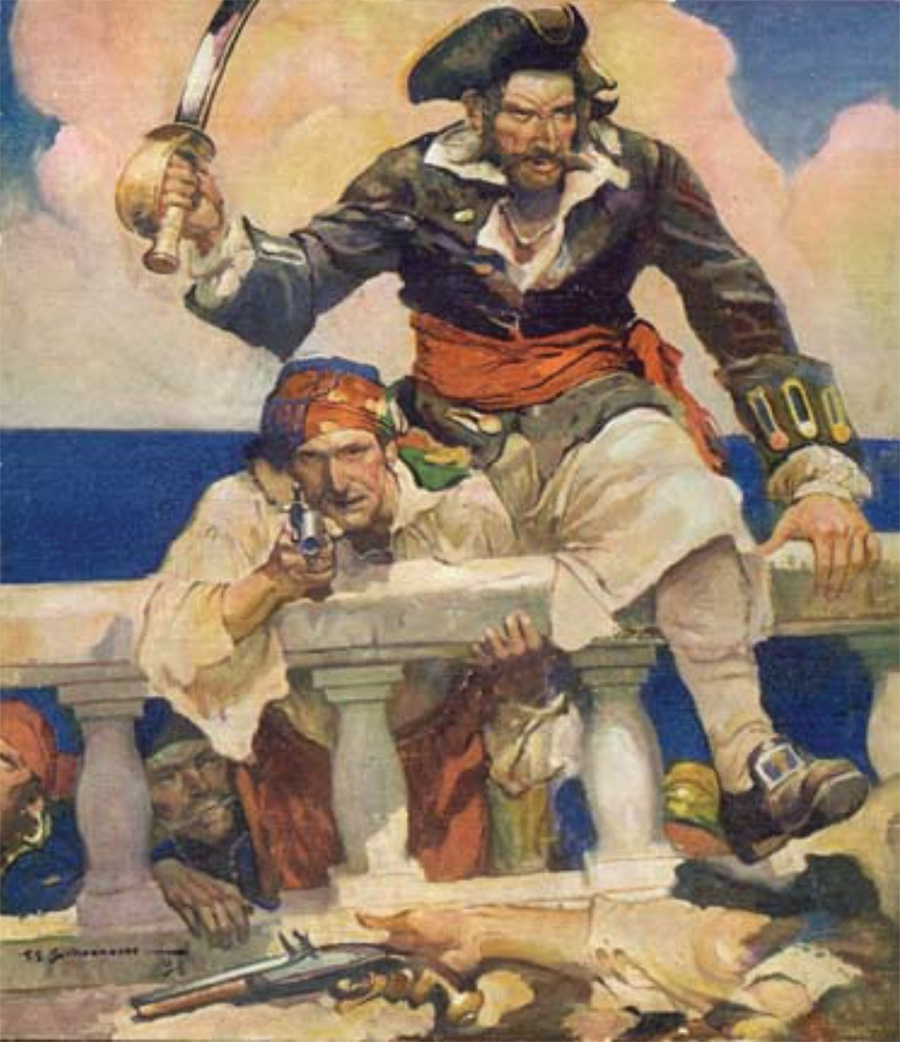 When did the current version of a pirate become popular?

Only once people started making money off the legends. Around the late 1800s, there were a number of artists, like Howard Pyle, who began creating illustrations of pirates. Then came a number of films that romanticized the pirate life, starting in the mid-1900s. That’s when the distinctive pirate look and manner of speaking coalesced. No one said “Arrgh!” until Robert Newton played Long John Silver in the 1950 film Treasure Island.

What about the idea of buried treasure?

Buried treasure is also a ridiculous myth. If you took a small chest, let’s say 6 cubic feet, and filled it with gold, it would weigh 9,500 pounds! How would you move that, let alone bury it? The rumor probably came about because during that time, if you had valuables and didn’t have a safe, you’d bury them in your backyard.

What’s been your biggest revelation about Blackbeard?

A year or so into my research, some records showed that Blackbead had a sister, Susanna White, who lived on the banks of the Tar River near Washington where he’d visited. After searching this swampy area, I found the headstone of Susanna White near a bridge over the Tar River in Grimesland. When I read the tombstone, I realized she couldn’t have been his sister: She was born 37 years after Blackbeard died. For many years after that, I’ve been haunted by her identity and why folklore associated the two.

I finally proved her identity by poring over the deeds at the Pitt County Courthouse. It listed a transfer of property from a Salter family member to her “children and grandchildren,” including Susanna White. She was the granddaughter of barrelmaker Edward Salter, who plays a huge role in the narrative of that time. For a while, history told us Salter was a pirate with Blackbeard and was hanged. But after research in England’s National Archives and the North Carolina Archives, I discovered he wasn’t hanged. After he was pardoned and released from custody, Salter returned to Bath. He became a representative of Bath at the colonial legislature and a patron for the construction of St. Thomas Episcopal Church, and had a productive life and a family. 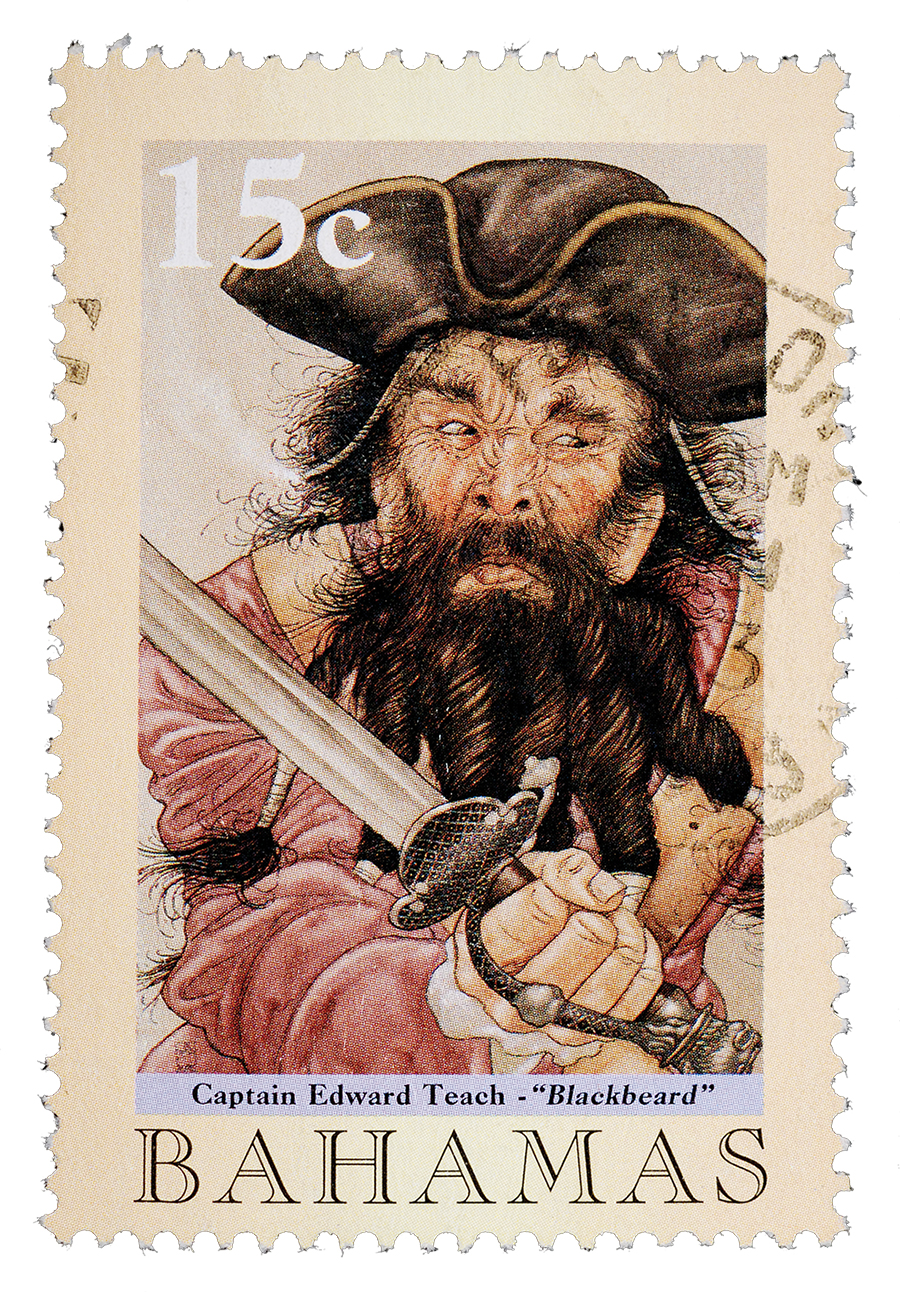 What have your findings led to?

The majority of Blackbeard’s inner circle of officers were from Bath and the Pamlico region of North Carolina. He had close relationships with the colony’s collector of customs, Tobias Knight, an enslaved Black man named Caesar and John Martin, the son of the town’s founder. This leads me to believe that Blackbeard himself was from this area or had strong ties to the town.

That contradicts a lot of the accepted history. People believe that Blackbeard’s real name was either Edward Thatch or Edward Teach, and that he was from Bristol, England or the Caribbean. But it never made sense to me that an out-of-towner could sail to Bath and tell people what to do, or that even someone from Jamaica would have strong, trusting relationships with locals. These people were willing to fight and die for him.

What do we know about Blackbeard’s last days?

It was a time of great uncertainty, danger and betrayal. A number of Blackbeard’s former pirates left him to return to honest lives. I believe that he would have done the same, but by the autumn of 1718, Blackbeard had become notorious throughout the colonies for some of his acts of piracy, one of which was a blockade of the port of Charleston. By this point, his ship, the Queen Anne’s Revenge, would have been crowded with as many as 400 pirates — he’d have had no choice but to continue committing acts of piracy to keep everyone fed and mildly intoxicated.

He tried to return to Bath, where colonial governor Charles Eden had given him a pardon. But it was worthless — he had violated its terms and everyone knew that, including Virginia’s lieutenant governor, Alexander Spotswood, who hoped to burnish his reputation as a vanquisher of pirates. About that same time, rumors were afloat that the King of England had issued a new pardon for pirates, with more generous terms, but no one knew when it would arrive.

So Blackbeard and his crew were laying low at Ocracoke, not sure of where to go or when or if they were being hunted.

They waited too long. They were surprised by Royal Navy Lieutenant Robert Maynard, who Spotswood had hired to capture Blackbeard, with a crew of 60. Maynard shouted that they were there to take Blackbeard dead or alive. Hoping to stand his ground, Blackbeard fired the first shots — an act of treason! And in fewer than six minutes of hand-to-hand combat, the king’s men bested the pirates. A highlander with a broadsword was said to have slashed Blackbeard from behind, cutting off his head. Yet, Spotswood’s invasion of his neighboring colony was illegal: He had no authority to arrest or kill pirates within the inland waters of North Carolina. Three weeks after Blackbeard’s death, the king’s new pardon arrived in Virginia.

I reconstructed this based on three sources. One was a letter I found in the British National Archives written by Royal Navy captain Ellis Brand, who supervised the expedition — it’s the most detailed and reliable. Maynard wrote a letter to a friend that added a few more details. The third source, based on hearsay but reasonably trustworthy, was a news report published in a Boston newspaper that recounts eyewitness testimony about the battle at Ocracoke.

What’s next in your research?

I’m searching in Charleston and Philadelphia for more that could help us complete his story. A great mystery I’d love to pursue is what happened to Blackbeard’s log book. On January 3 of 1719, Maynard returned to the James River in Virginia with Blackbeard’s head. Letters found in my research say he recovered Blackbeard’s “pocketbook,” which would have been a diary with a list of receipts and other papers. When Blackbeard was killed, the Royal Navy took the log book from his sloop to London, but from there, it disappeared.

Who was Blackbeard to you?

After years of research and analysis, I still don’t know Blackbeard’s true identity or origins with absolute certainty. Despite being a hugely popular historical figure, he remains a silhouette in the fabric of time.

This interview has been condensed and edited for clarity.