Thistle Dhu Gets a Do-over

A Pinehurst palace celebrates its centennial in mod attire

Attention all amateur and professional Pinehurst house historians. Forget everything you saw, read or heard about Thistle Dhu — the 13,000-square-foot Roaring 20s palace built by James Barber, the very same Midas who conceived and constructed, in his yard, America’s first miniature golf course. No kiddie putt-putt, this. Barber’s Lilliput stumped the deftest duffers.

Look up: The living room (in four sections) ceiling is wallpapered in a dizzying metallic kaleidoscope pattern.

At last! Those floors, moldings, window panes and upper kitchen cabinets provide a link to an era when wealthy industrialists and their socialite spouses spread money around Pinehurst, the newly chic winter destination.

Then imagine the Barbers’ reaction to such décor hedonism accomplished by young-and-restless owners Patricia and David Carlin, who commute — sometimes by chartered jet with three big dogs — from their primary residence in Park City, Utah.

“For 20 years nobody cared about this home. It was abandoned, an eyesore. The land was parceled out and the true entrance destroyed.” Then, she continues, she and David fell in love with golf, Pinehurst and the Barbers. They spent millions of dollars and thousands of hours resurrecting a notable historic property, creating an emotional tie to the house and its first family. 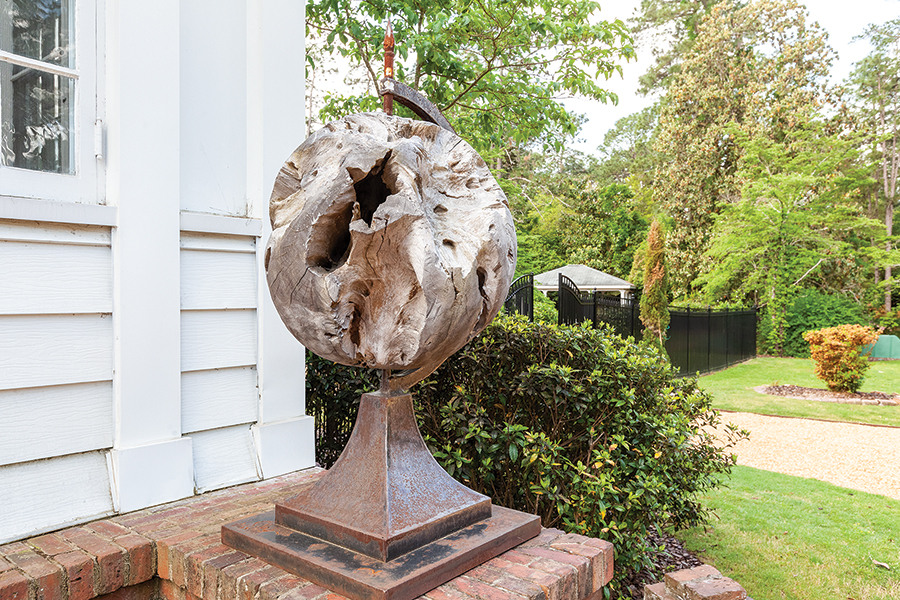 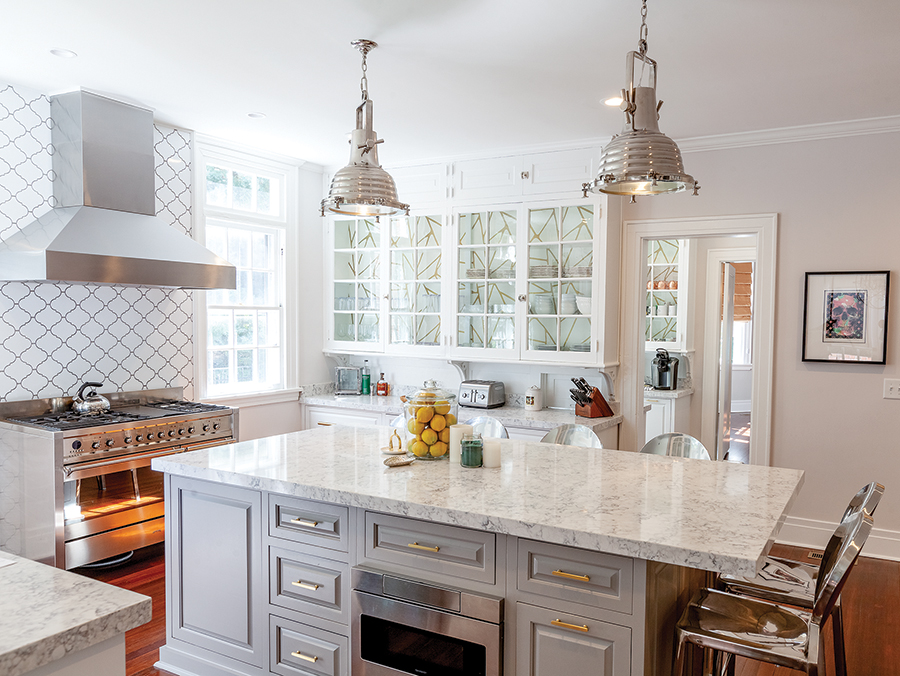 The backstory: London-born James Barber and his brother founded Barber Lines in 1886, relocated to America in 1912. By 1917 the company had grown into Barber Steamship Lines of New York, with trading routes worldwide, including Africa, Russia and Australia. Barber merchant ships played a major role in supplying troops during World War I. James Barber’s wealth allowed him to indulge in his passion, golf, at fashionable Pinehurst, where he moved in 1916 and eventually served as Tin Whistles president. Here, he built Cedarcrest, a mansion large and elaborate enough to please his wife and seven children . . . for a while, since in 1919 he built a yet more elaborate home first dubbed Mrs. Barber’s House and later Thistle Dhu, a riff on “this will do” which is what Barber said upon viewing either the house or his miniature golf course. The phrase stuck, given thistles are emblematic of Scotland and Scotland emblematic of golf.

The second house, of Federal Revival style, had Palladian archways framing the front entrance and cost, according to faded documents at Tufts Archives, a whopping $33,000 — about $2 million in today’s dollars.

By 1921, The Pilot called Barber “the biggest force in development of the Sandhills,” for developing Knollwood.

After Barber died at Thistle Dhu in 1928, the house was sold to a Wall Street wheeler-dealer-scoundrel named Michael Meehan, of Good Humor ice cream fame, who deeded the property to the Catholic Church. Nuns from the Daughters of Jesus order in Raleigh renamed it Maryhurst and operated the mansion as a retreat for women. 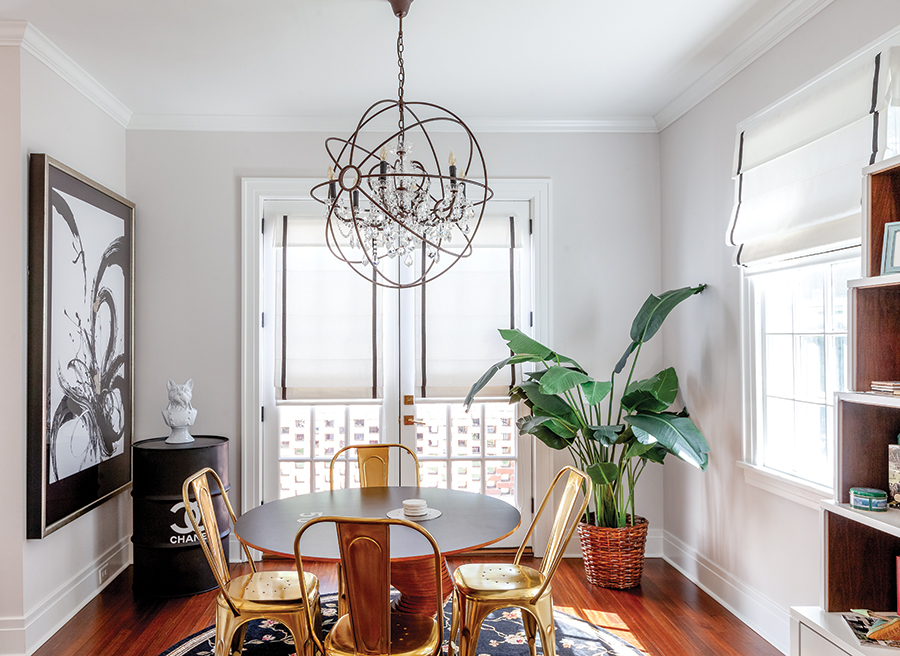 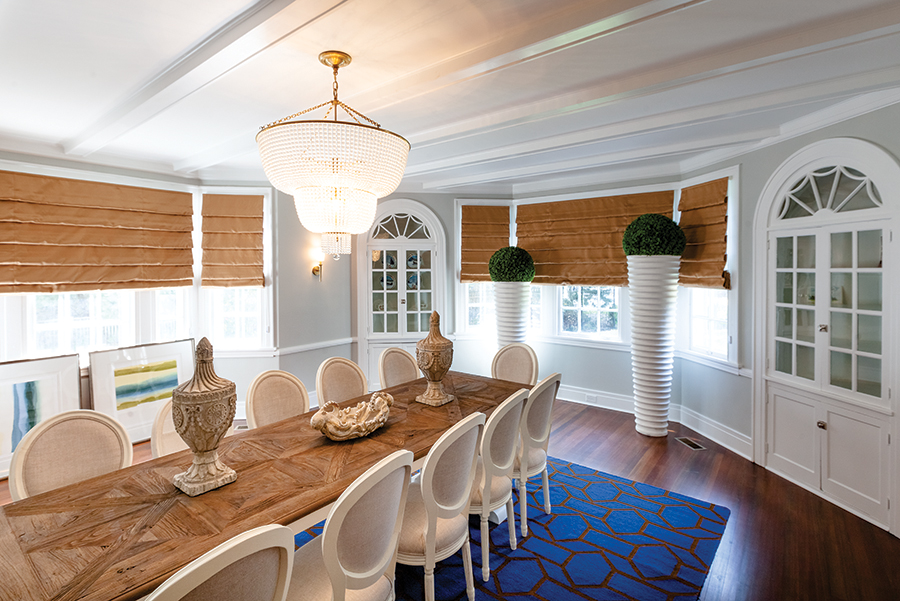 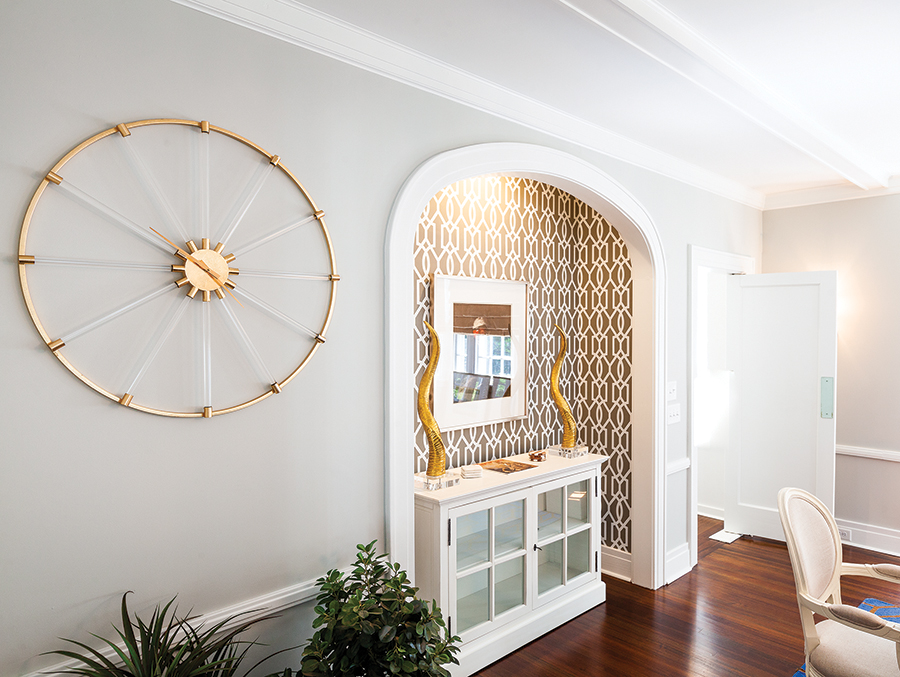 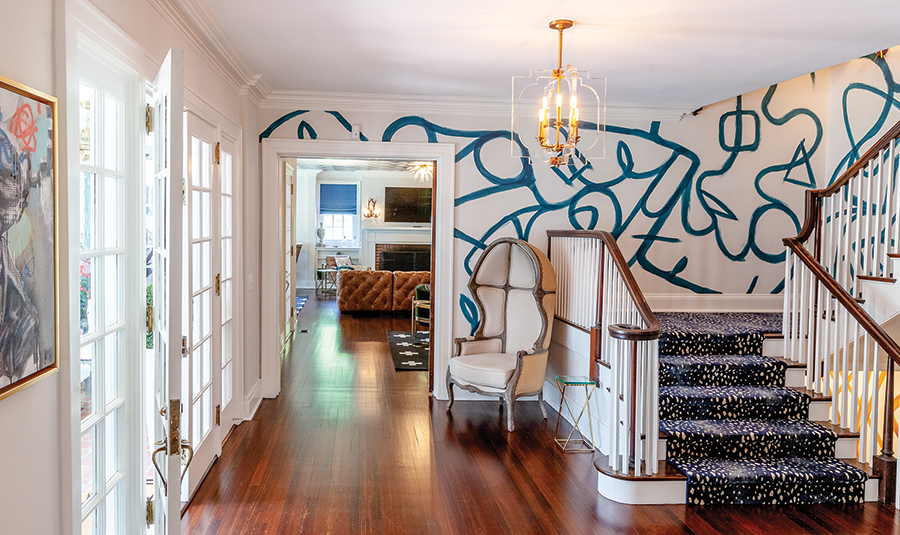 David and Patricia Carlin had never played golf until their honeymoon in 2013, at a Florida resort. After only a few rounds they were hooked — played every day for two weeks, then took road trips from their home in Palm Beach as far north as Hilton Head, where somebody suggested Pinehurst.

Besides golfing through Scotland and Ireland, they continued to visit Pinehurst four times a year, renting houses and riding bikes around town looking for something permanent. Thistle Dhu, in shambles, captured their imagination.

“I figured somebody who knows how to build steamships would build a sturdy house,” Patricia reasoned.

They dug deep into its history, even locating and contacting Barber’s great-great-granddaughter. Finally, they bought it, as well as another house to live in during the renovation, which took almost two years. The floorplan would remain intact except for reducing the bedrooms from nine (or 10, depending on source) to six, thus enlarging the remaining ones. Servants’ quarters near the kitchen became a suite suitable for guests, or even the owners, since Patricia says they sleep all over the house. A corner second floor bedroom became the his/hers dressing room. Bathrooms number 10, meaning never having to travel far. The loos, one with a doggie tub, are notable for their wallpaper — from classic to geometric art deco, to floor-to-ceiling tiny golfers putting away. Linger awhile, and appreciate. 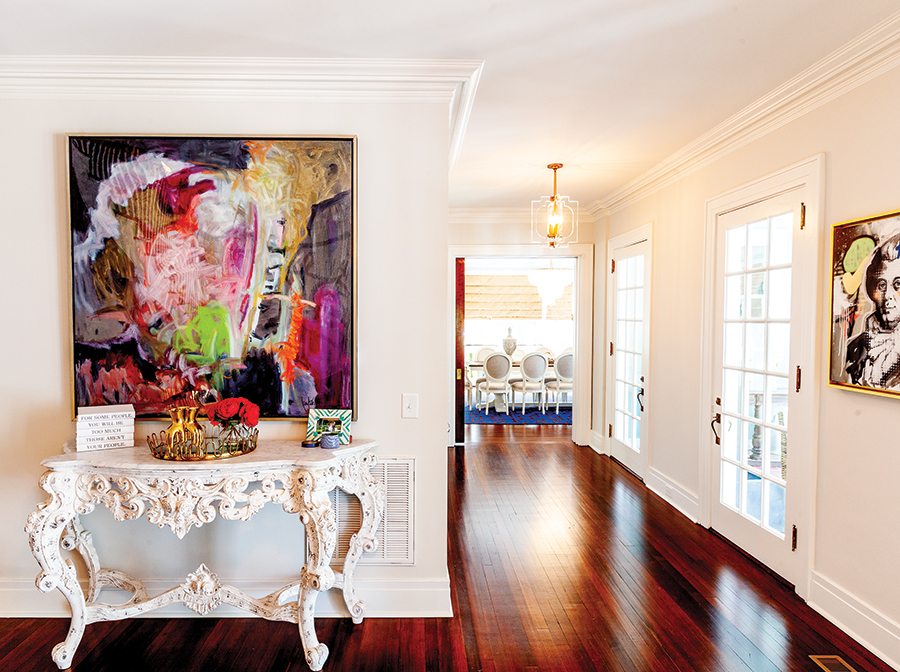 The Carlins’ décor speaks to their lifestyle: young, successful, confident, unencumbered (except for those three frequent-flyer dogs) and, for a project like this, all in. “We don’t plan anything,” David says. Patricia’s mantra is: See it; like it; buy it. Comfort is his. Every stick of furniture, every rug, towel and mug in the house is new. She breezes through a football-field sized furniture warehouse in an afternoon, leaving orders which when delivered fill many rooms. Then, she finishes online at Restoration Hardware. The effect is minimalist punctuated by surprise. That pink velvet on the tufted living room sofa reappears on the master bedroom headboard. Crystal chandeliers are surrounded by metal orbs. Whoever heard of a ping pong table surfaced in planks? Or an oil drum emblazoned with the Chanel logo? The dining room, with original corner cupboards, also houses shrubs trimmed to resemble scoops of ice cream atop 5-foot white “cones.” On the sun gallery stand two year-round Christmas trees. A set of Lucite chairs at the game table channel Frank Gehry — the metallic gold ones in the dinette, probably not. But the couches are definitely Cynthia Rowley.

“If we get bored, we can switch stuff around every year,” David says.

The house had a full basement, unusual for the times except for those with coal furnaces. Here, the nuns built a confessional not far from the existing bar and now, fitness/entertainment equipment.

Only the dining room delivers a poignant message. “We’ve never eaten in here,” Patricia says. No Thanksgiving or other dinner has been served on the massive table seating 12. After the housewarming, they hosted no big cocktail parties or cookouts, despite outdoor dining facilities. Because, in truth, although the Carlins feel part of new-generation Pinehurst, they don’t do much day-to-day living at Thistle Dhu. The kitchen — white and pristine as an operating room with a graveyard’s worth of marble — shows no trace of food preparation. The butler’s pantry stands idle.

Instead, rooms are peopled by art, some channeling Beatles-style album covers from the psychedelic ’60s: pop-art Queen Elizabeth competes with a Renaissance damsel wearing ski goggles and paintings suitable as backdrop for Stravinsky’s The Firebird ballet. Still, the piece de resistance has to be the wild brushstrokes in the foyer and up the stairs, inspired by something the Carlins learned from a Beverly Hills (not Versailles) designer.

“We just told the painter to do whatever you want,” David says. “My mother didn’t like it but Kelly Clarkson did.” 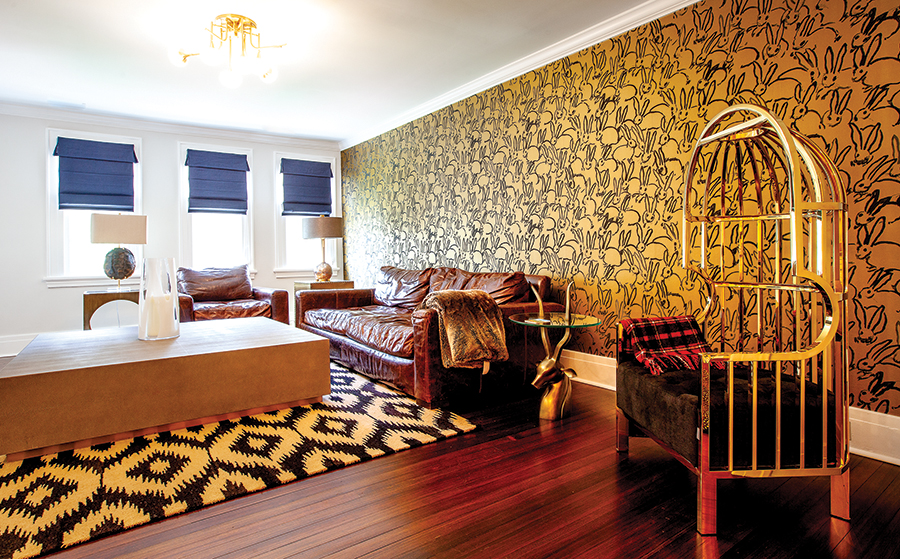 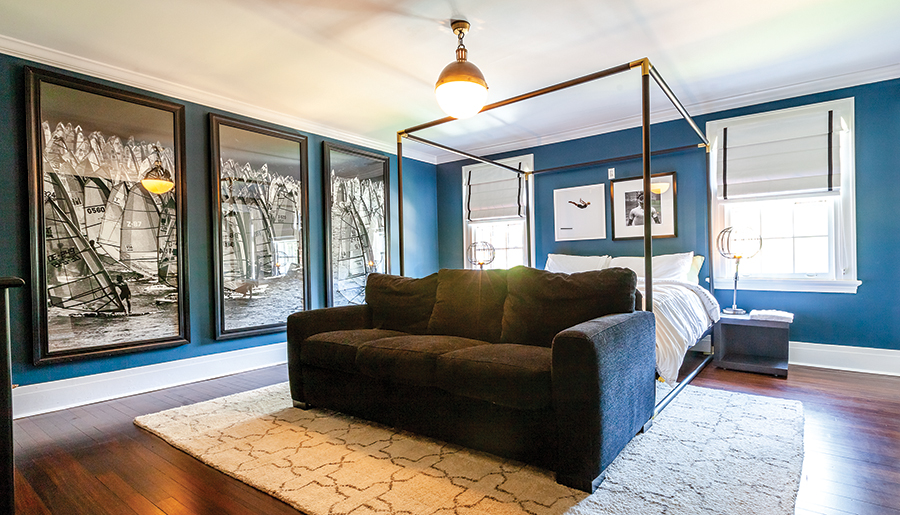 The overall effect is startling yet invigorating, representing how fresh, modern concepts transform historic spaces. The Carlins attacked the project of re-imaging a neglected landmark up for auction with verve and attitude. The result is not for everybody, although great-great-granddaughter Kate Barber approved.

A sign in the foyer warns: “For some people, you will be too much. Those aren’t your people.”

Their mission accomplished, David and Patricia may move on, perhaps new construction overlooking a Pinehurst course. Patricia misses her family, who now live in Arizona. Come winter, the avid skiers head back to Park City.

But for now at least, this’ll do.  PS