How Amarra Ghani became a guiding light for those in need

Amarra Ghani has continually found herself in two roles that are surprisingly in concert with one another: caregiver and outsider. These two roles go hand-in-hand more than one would think. Often, outsiders come from a perspective that allows them to assess the needs of others with fresh eyes, and caregivers tend to take on singular roles that set them apart.

“I’ve always felt different,” Ghani, the founder of Welcome Home in Charlotte, says. “The color of my skin, my name.” After 9/11, these feelings intensified for Ghani, a practicing Muslim whose parents are Pakistani immigrants. “I felt super-ostracized,” she says, despite growing up in ethnically and culturally diverse cities in New York and New Jersey. “People would say hurtful things to me because of what I looked like or how I grew up.” Ghani’s feelings of being an outsider intensified when her family moved to Charlotte halfway through her senior year of high school. Feeling alone, Ghani, began to lean on her faith. “I was isolated from everyone,” she says. “I fell in love with Islam because it was comforting for me. I was praying more. I was reading the Koran and I felt like God was my only friend.”

After high school, Ghani attended community college in Charlotte before transferring to the University of North Carolina-Asheville, where she founded the Muslim Student Association in hopes that other practicing Muslims would not feel as alone as she once had. “That’s where I found my voice,” she says. After college, she moved to Washington, D.C., to work for the U.S. Department of Agriculture, and later as a production assistant at NPR. Ghani was living out her career dreams, but was called home to Charlotte in 2016 after her mother was diagnosed with breast cancer. She became her mother’s caregiver.

She didn’t stop there. 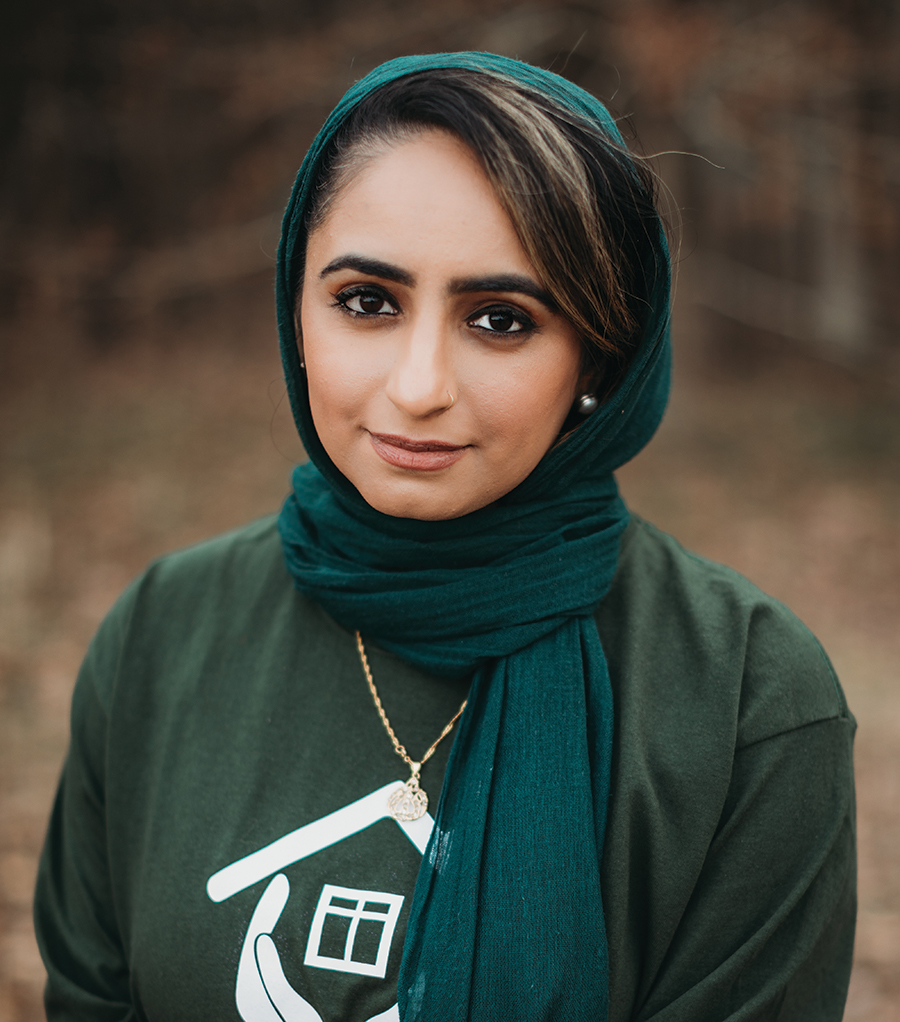 While throwing a “friendsgiving” celebration that year, Ghani encouraged her friends to bring warm winter clothes that she could donate to people in need. She learned that a friend’s mother — a native of Afghanistan who’d been living in Charlotte for 40 years — was gathering clothes for local refugees. When Ghani took her friendsgiving haul to the woman’s house, she asked her what else local refugees needed. She was surprised to learn that most of them needed the basic necessities like utensils, towels and bedding. She told her that she would put out a call on social media, which she had regularly used to make connections during her work in D.C. The response was overwhelming; soon, her parents’ garage was full of donated materials, from used clothing to brand new items to gift certificates. “Once I started, it just kept growing,” she says. When the pool of donors and volunteers swelled from 30 people to over 250, Ghani realized that she needed a better platform, so she set up a WhatsApp group called “Welcome Home.” This seemed like an appropriate name for a group dedicated to welcoming refugees as they bridge the gap between the struggles in their old lives and the challenges of the new.

While working full-time with Wells Fargo, Ghani set about turning Welcome Home into a functioning organization, complete with a board of directors. Once things became official, the first phase of the organization’s work was to meet the basic needs of the refugee community by furnishing apartments, for example, or taking people on grocery store visits and other errands where assistance was needed. The second phase of operations focused on sustainability, and the organization forged ahead with programs in English language education and services that pair refugees with translators who can accompany them on doctor visits and other appointments where language may be a barrier.

Ghani knows these difficulties firsthand. “English is my second language because my parents would not talk to me in English,” she says. “As the child of immigrants, there’s a time when you become your parents’ parent. I was 11 when I started helping my dad with forms or going to the doctor with them or going to parent-teacher conferences to translate.” What a difference an organization like Welcome Home would have made in the life of her family: “I wish someone had guided my parents,” she says. “My dad could’ve had less pressure on him.” And how were they to know such resources existed? “When you’re someone who doesn’t speak the language and you’ve just arrived and don’t know the community around you, you need someone to guide you. That is what drives me.”

Welcome Home started out with 21 families, and they all eventually graduated from the program, no longer in need of assistance. “We have families who come here and who don’t know English or how to drive and perhaps have a fourth grade education,” Ghani says. Not only are they learning how to survive in a world that feels so foreign, she continues, but they are learning how to thrive. “We have three families who have been able to purchase houses in the last year,” she says. They were able to raise money to cover the rent for another family where the wife was diagnosed with breast cancer. “Earlier this year, we learned that this family was able to buy a house as well.” 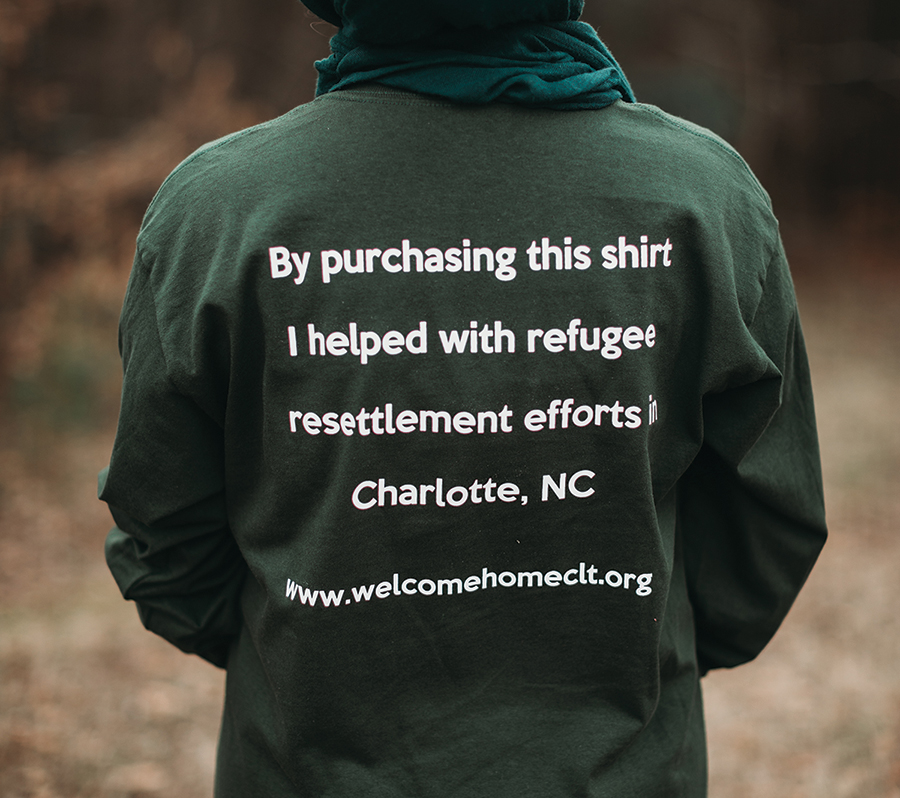 But Ghani also recognizes the hesitancy many people have about seeking help, which is why Welcome Home plays such an important role in the lives of refugees from places like Syria, Afghanistan and Myanmar. While many refugee organizations are missionary in nature, Welcome Home is not. Still, Ghani cannot deny the comfort families find in working with an organization largely comprised of people who share the refugees’ religious faith, culture and worldview. “It makes a difference in small ways and big ways,” she says. “For example, during Thanksgiving, our families know that we can provide Halal turkeys. That establishes a level of trust.” Now, perhaps more than ever, trust is paramount as refugees settle into a new community during the coronavirus pandemic.

As the virus takes its toll in communities across the state, Welcome Home finds itself back in their first phase, meeting the basic needs of their families. “It’s all about necessities and fundraising to cover bills,” Ghani says. It’s also about keeping families safe from the virus itself. In mid-February, Welcome Home partnered with the city of Charlotte and the Mecklenburg Department of Health Services to provide vaccinations. “They reached out to us because of the skepticism of the vaccine in refugee and immigrant communities. We’re bridging that gap and bringing familiarity to the process of getting vaccinated,” Ghani says.

Through it all, Ghani, who last month was awarded UNC-Asheville’s Francine Delany Award for Service to the Community, maintains that she is driven by her faith, as well as by the memories she has of being an outsider and her most recent calling to care for those in need. “What did I do to deserve the life that I have?” she asks. “Nothing. I was just born into this family and this faith and this atmosphere. Others aren’t so lucky.” When she works with refugee families, assisting them with everything from getting clothes to learning English, she can’t help seeing a bit of herself in their struggle. “I know where they’re coming from,” she says, “I’ve been in that place.” No matter the place where members of Charlotte’s refugee community find themselves, Amarra Ghani wants to make certain they get home.  PS