By Wiley and Mallory Cash

In 1994, Oscar Wong began brewing beer in the basement of Barley’s Taproom and Pizzeria in downtown Asheville. Wong, the son of Chinese immigrants, grew up in Jamaica and moved to the states to study civil engineering at the University Notre Dame. After forging a successful career in nuclear engineering, he would later create an innovative nuclear waste disposal company and then go on to found Highland Brewing Company, Asheville’s oldest independent brewery. As the first legal brewery in Western North Carolina following the repeal of prohibition, you can imagine its allure. Still, it took Wong eight years to break even. Why? Because he was determined to produce a high-quality product on a consistent basis. He invested in his vision. While that superior quality persists, little else remains from those early days in the basement.

In 2011, Wong’s daughter, Leah Wong Ashburn, officially joined the team at Highland Brewery. More than a decade earlier, Ashburn had applied for a position with her father’s company after graduating with a degree in journalism from UNC-Chapel Hill, but her father turned down her application. He wanted her to find her own way, he told her. And so she did.

Years later, after Ashburn built a thriving career in sales and marketing with a yearbook publisher in Charlotte, her father actually recruited her for a position at Highland, but in the intervening years, the tables had turned: He could no longer afford her.

But blood is thicker than water, and, apparently, so is beer. 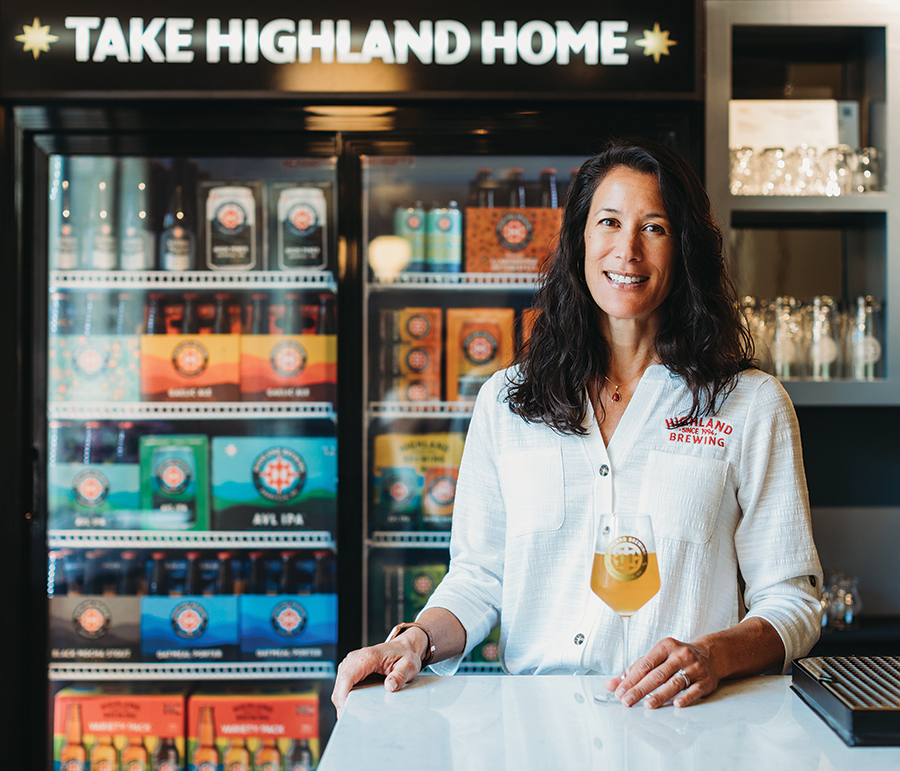 “Other things became more important and the brewery was one of those more important things,” Ashburn said in a 2018 interview with Business North Carolina. “It was about being part of the community. You can’t put a value on that.”

Leah Wong Ashburn is now Highland’s president and CEO, and her tenure has marked an era of rapid change, both for the company and the city of Asheville. In 2011, Highland opened a tasting room at their mountaintop manufacturing facility in east Asheville, which has now grown to 70,000 square feet and offers complimentary tours of their onsite brewery, a lively taproom with ample seating, a performance stage, a rooftop garden bar and an indoor event space. According to Brock Ashburn, Leah’s husband and the company’s vice president, “We built the taproom to accommodate the throngs of people who were showing up, part of an ever-increasing interested public who wanted to drink our beer where it was made.”

Over the past decade, a lot of people have — as Brock Ashburn puts it — “shown up” in Asheville, and the city is now an international destination for foodies, beer connoisseurs and outdoor enthusiasts. “There’s always been a soul and a spirit in Asheville,” Leah says, “and Highland got to join up with other people who believed in the potential for Asheville. Great beer is a complement to great food and quality of life.”

Community and regional pride are more than just branding tools; Highland is a company whose culture is built on stewardship and community responsibility, tenets made apparent in their practices of reducing or reusing waste, partnering with local nonprofits and embracing solar power. The company also collaborates with the Southern Appalachian Highlands Conservancy, naming seasonal beers after unique regional landscapes. Ashburn has always made clear that she intends to keep the company concentrated on regional endeavors and has no plans to ship beer across the country, choosing instead to focus the company’s efforts within the confines of the Southeast. This comes as no surprise for a brewery that has spent two and a half decades fostering a regional brand in a region that has quickly gained international attention. 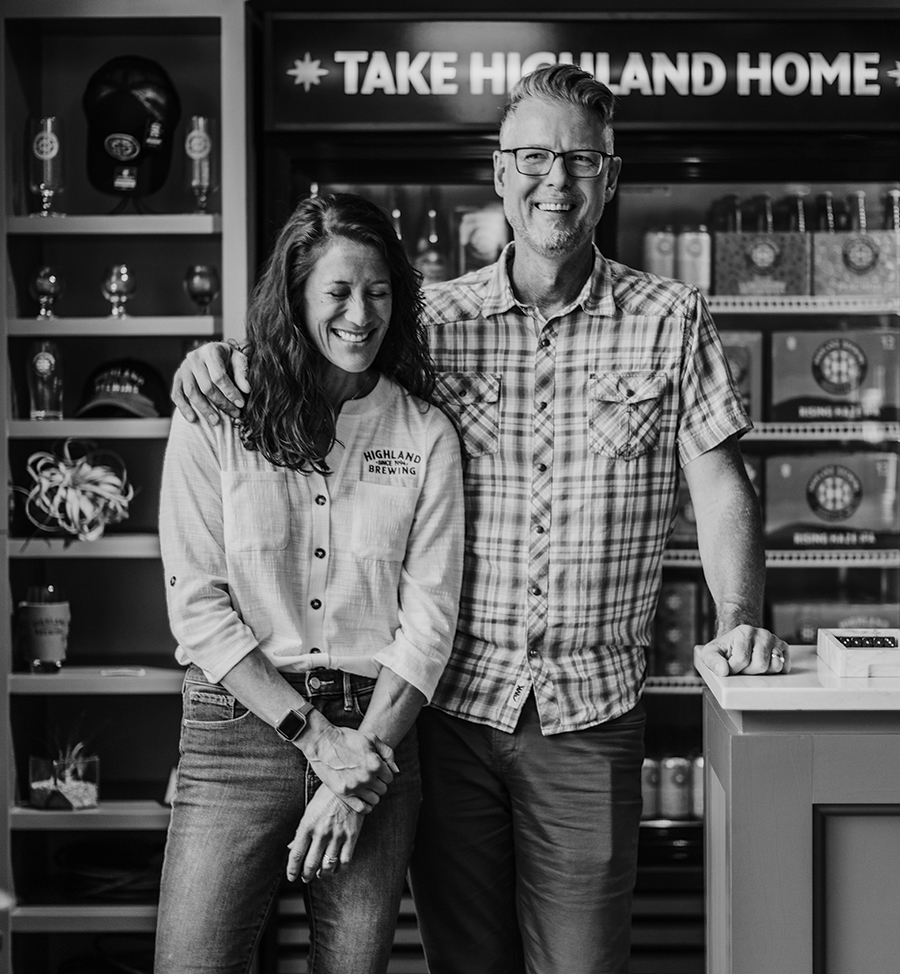 Today, Leah and Brock are sitting at the brewery’s new downtown taproom in the old S&W Building, a quintessential example of Asheville’s stunning 1920s Art-Deco architecture. Late morning sunlight pours through tall windows that look out on Pritchard Park, illuminating the gold-plated fixtures and ceiling tiles, the two-story marble columns and tiled floors in a glowing aura that sweeps visitors back into the roaring ’20s. You can almost sense what Asheville must have been like a century ago, when it was first known as a destination for Hollywood stars, politicians and titans of industry. Highland anchors the new S&W Market’s downstairs dining area with a taproom, along with several local restaurants that provide counter service. Upstairs, on the mezzanine level, Highland has opened a full bar and tasting room with ample space for guests to relax over a pint.

One can only imagine what it must mean to Leah for Highland to return to downtown, where it all started from such humble beginnings over a quarter century ago.

“As a second-generation owner, I was encouraged to make the brewery my own,” she says. “That did not feel safe to me at first because of the long history of Highland, but my father’s sentiment was honest, and he’s let us create our own vision.” That meant changing the beer portfolio and re-envisioning the brand. She says it also meant improving the property: “We started as a manufacturing company, but Brock’s an engineer and a builder, and I’m a marketer,” Leah says. Combining all of those interests and backgrounds led to a complementary hospitality component. “It appeals to tourists because it highlights some of the great things about Asheville in one location.” 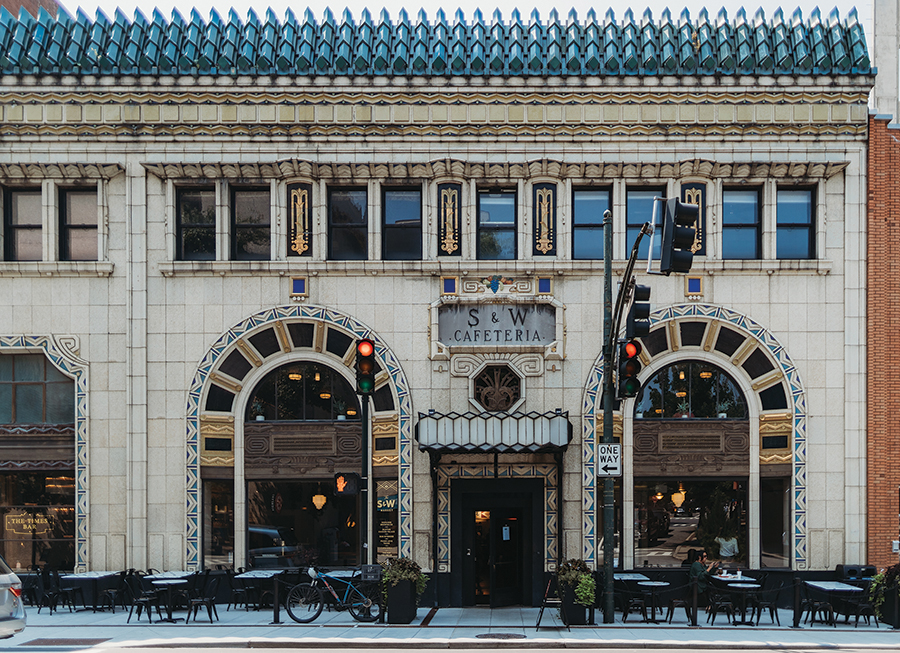 Outside, people are waiting for the S&W Market’s doors to be unlocked for the day’s business. A line of tourists and downtown office workers in business attire snakes down the sidewalk. Leah and Brock look out the window and pause for a moment, perhaps recalling the throngs of beer enthusiasts who showed up the minute the first taproom opened at Highland’s manufacturing site a decade earlier.

“This is an opportunity to tell our story downtown and also attract people to come out to East Asheville to visit our brewery,” Brock says. “It’s a great opportunity to get our brand out there and let people know where this all started.”

From a downtown basement to a mountaintop in East Asheville to the second floor of one of the city’s most iconic downtown buildings, Highland has come a long way. But whether it’s the quality of the beer or the family name, some things never change.   PS

Wiley Cash is the writer-in-residence at the University of North Carolina-Asheville. His new novel, When Ghosts Come Home, will be released this month. Mallory Cash is an editorial and portrait photographer.