Sweet Tea for the Soul

A sociable Southern greeting in a glass

In the South, summer heat takes on a personality of its own, inspiring thoughts like, “I’m walking through soup,” or “If it gets any hotter, I’ll have to take off stuff I really ought to keep on.” One of the only things to do on a day like this is to crank up the AC and have a cold glass of iced tea. Not the iced tea Northerners refer to, the kind that’s missing that one, all-important, ingredient. No, the sweet kind, the kind that Grandma made fresh when she welcomed you every time you knocked on her screen door. Grandmas know tradition, and the sweet tea tradition in the South goes way back to 1839 and a recipe for “Tea Punch” in The Kentucky Housewife cookbook.

To understand the full story of how Southern sweet tea came to be, one needs to understand the building blocks of this cultural icon. It’s the coming together of a trifecta of luxuries in Colonial America: tea, ice, and sugar.

The first is tea. Prior to the 1800s, tea was served hot. As a colony of Great Britain, Americans enjoyed their lavish green tea, drinking more of it than coffee. In 1773, when Britain put a 25 percent tax on tea imported to the American Colonies, the Colonists saw themselves being priced out of one of their favorite refreshing pastimes. And they rebelled. Of course, the Founding Fathers may have had a few other grievances in mind, but it was tea that went into Boston Harbor. After the War of Independence the new nation’s clipper ships sailed directly to China, cutting out the British middlemen and providing the states with tea — and some of its first millionaires.

The second ingredient originated from the wild concept of “ice harvesting.” In the early 1800s, ice became year-round thanks to Frederic Tudor, a Boston businessman who masterminded the trading of ice, garnering him the title “Ice King.” Tudor hired workers for the dangerous job of chipping away frozen ponds in the North. Once gathered, the ice was stored and shipped to hotter locations, like the Caribbean, Europe and India. On blistering summer days, cold treats like ice cream and sorbets became available to patrons who could pay the high prices for it.

Sugar, the third luxury in sweet tea, was domesticated 10,000 years ago on the island of New Guinea, where it was used as ceremonial medicine. Erin Coyle, a North Carolina Humanities Council Road Scholar who specializes in tea, says, “Sugar was the oil of its day.” It was introduced to the New World by Christopher Columbus, who engaged in a month-long affair with the extraordinarily beautiful Beatriz de Bobadilla, governor of Gomera in the Canary Islands — the westernmost islands of what the Europeans considered the known world and a logical place to lay in supplies for an exploration into the unknown. With a reputation for extraordinary beauty, the “Lady of the Gallows,” as she was known, gave him cuttings of sugar cane that found their way to Hispaniola.

“The cost of sugar dropped by the 1700s. Everyone was consuming it,” Coyle says. “In the 1700s, the average Englishman ate 4 pounds of sugar per year. In the 1800s, it increased to 18 pounds. I can only imagine the average amount of sugar a person consumes today.” 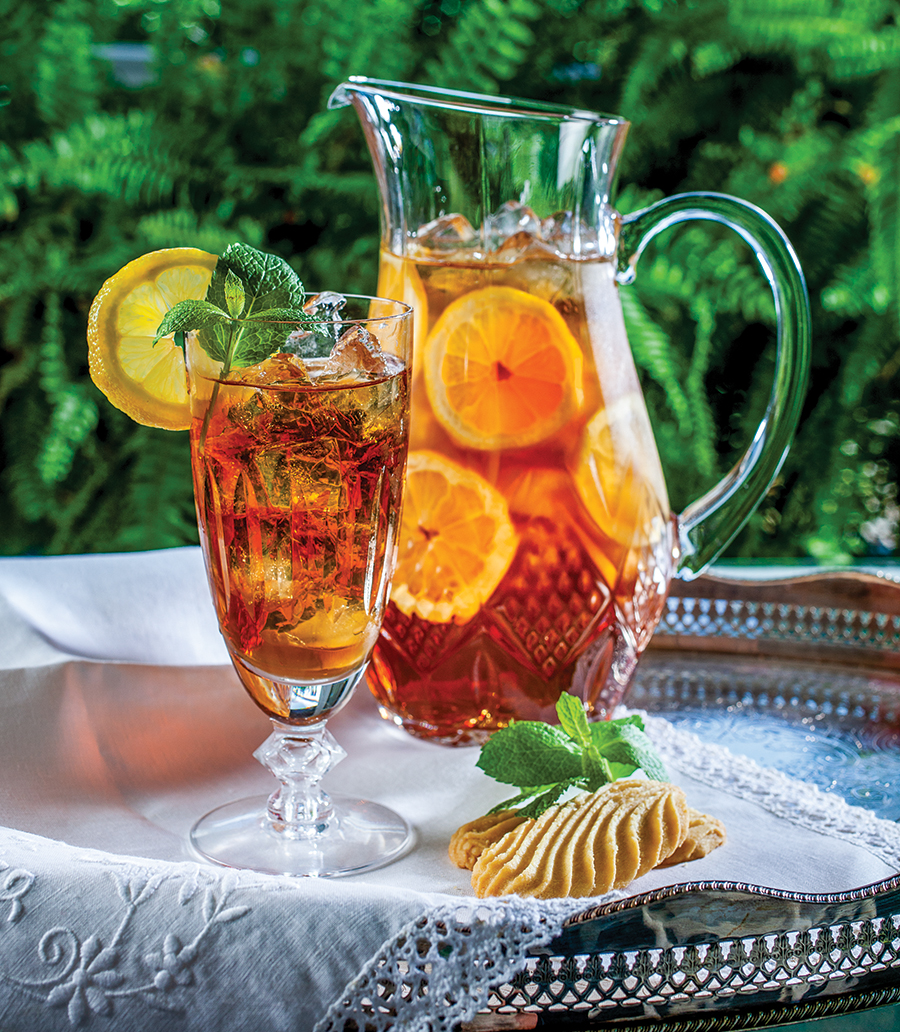 One of Coyle’s favorite stories is about a popular establishment just to the southern side of the “tea line” dividing the North and the South — the unsweetened from the sweetened. A Northerner waited his turn behind an older Southern gentleman at the iced tea counter. When the Northerner filled up his cup, he took a deep swig, almost spit it out, and said, “I never tasted anything so terrible in my life.”

The Southern gentleman patted him on the back and said, “You’ve got to work up to it, son.”

Debates on how to make sweet tea are resolute and plentiful. Lipton or Luzianne? Crushed or cubed ice? Baking soda? Simple syrup, yes or no? And the amount of sugar in sweet tea is as complex as the DNA of its maker.

The original iced teas, called “tea punches,” had various blends of sugar, juice, alcohol, lemon, water, tea, spices and cream. In the beginning, these punches had loyalist names such as “George IV,” then made way for more patriotic drinks, called  “Charleston’s St. Cecilia Punch” and “Chatham Artillery Punch.” While these drinks may have had fancy names, none can take home the grand prize for being the original sweet tea. That honor stays with Mrs. Lettice Bryan, whose recipe for “Tea Punch” was published in The Kentucky Housewife cookbook in 1839, making it the first sweet iced tea.

The “Southern Sweet Tea” common today has its roots in the Housekeeping in Old Virginia cookbook, written by Marion Cabell Tyree and published in 1878. Unlike its tea punch predecessor, this version is non-alcoholic and uses large amounts of sugar.

Over time, the production of sugar, tea and ice cost less, and the once expensive refreshment reserved for tea parties and galas became commonplace. It wasn’t long before sweet tea took up residency in the South, where anyone from a neighbor to a mail carrier to one’s grandparents could be greeted with a glass of Southern hospitality.

“The important part about tea is that, no matter where one travels in the world, it’s known for welcoming guests,” says Coyle, who tells the story of one family reunion. “Every family brings their own iced tea, and they all pour it into one vessel. A communal pot, so to speak. Their uncle would doctor it. He usually used pineapple juice as one of the ingredients — that’s one of the popular juices from the original tea punches. That tea would be shared with the whole family. It’s very ritualistic.”

When it came to making sweet tea, green tea was the Bible until the 1900s. During World War II, when it was virtually impossible to get one’s hands on green tea, the United States imported black tea from British-controlled India.

In the South’s sticky summer weather, an icy batch of sweet tea hits you right as rain as you rock on the front porch, watching the fireflies come out. A glass of sweet tea can take you back to childhood — the humidity on your skin as the screen door swings open, the scent of gardenia on the breeze, Grandma smiling, handing you a cold glass and saying, “Come on in, darlin’.”

“Make a pint and a half of very strong tea in the usual manner; strain it, and pour it boiling (hot) on 1 pound and a quarter of loaf sugar. Add half a pint of rich sweet cream, and then stir in gradually a bottle of Claret or Champagne. You may heat it up to the boiling point and serve it so, or you may send it ‘round entirely cold in glass cups.” 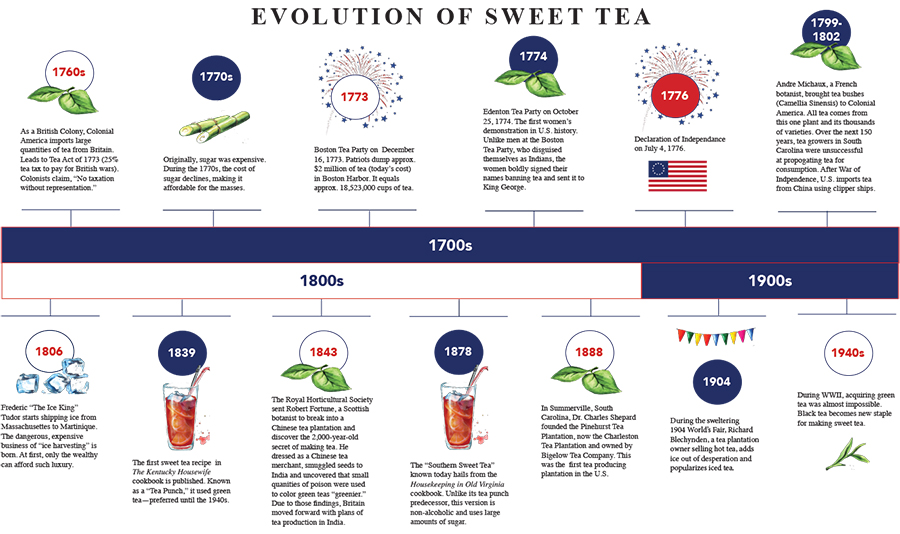 “Ice Tea – After scalding the teapot, put into it one quart of boiling water and two teaspoonfuls green tea. If wanted for supper, do this at breakfast. At dinner time, strain, without stirring, through a tea strainer into a pitcher. Let it stand till tea time and pour into decanters, leaving the sediment in the bottom of the pitcher. Fill the goblets with ice, put two teaspoonfuls granulated sugar in each, and pour the tea over the ice and sugar. A squeeze of lemon will make this delicious and healthful, as it will correct the astringent tendency.”

Arnold Palmer left his mark on golf, the Sandhills and sweet tea. The winner of seven major championships who designed over 300 golf courses, including the Mid South Club, is described by Jim Dodson in A Golfer’s Life as “a king with a common touch.” The story behind the refreshing Arnold Palmer drink is a bit mythical. Tea punches with juices have been around for over a hundred years with everyone making their own variation, including Palmer in the mid-1950s. Since there wasn’t a name for his favorite drink, he spent years describing the mixture of iced tea and lemonade to wait staff.

In the 1960s, Palmer ordered his lemonade-tea concoction after a hot day designing a golf course in Palm Springs, California. A woman overheard Palmer order his drink, and said, “I’ll have that Palmer drink.”

During an interview with ESPN, Palmer said, “From that day on, it (the Arnold Palmer) spread like wildfire.”

Serve in a glass full of ice.

Serve in a glass full of ice.

Southern Sweet Tea with a Twist

Since its inception, everyone has put his or her own spin on Southern sweet tea. Few have had the accolades for their iced tea mixology as Rachelle Jamerson-Holmes the founder of Rachelle’s Island Tea. In 2018, her famous tea won the People’s Choice Best Sweet Tea at the seventh annual Sweet Tea Festival in Summerville, South Carolina, and in May, 2019 the sweet tea was voted BEST Sweet Champion at the ninth annual Taste of Black Columbia, in South Carolina.

Jamerson-Holmes owns and runs Thee Matriarch Bed & Breakfast with her husband, chef Fred Hudson. They know that sweet tea is a welcoming necessity when guests visit — which is why people can enjoy a glass on-site or buy it by the gallon (or commemorative bottle) every day at their bed and breakfast.

“Sweet tea was and still is like water,” Jamerson-Holmes says, “always in the refrigerator waiting to quench someone’s thirst.”

Jamerson-Holmes’ tea story has an authentic Southern beginning that starts with family. She remembers joining her great-grandmothers and grandmothers, often drinking sweet iced tea from a Mason jar “on the front porch or under a shaded pecan tree for summer comfort and conversation.”

Currently, she is writing the Southern Sweet Tea Cocktails recipe book, and Thee Matriarch Spiked Island Tea is her signature drink. This recipe is a modern twist on the classic tea punch and Southern sweet tea.

“I love fruity drinks,” Jamerson-Holmes says. “This drink is me.” Sweet, refreshing, and full of tradition. 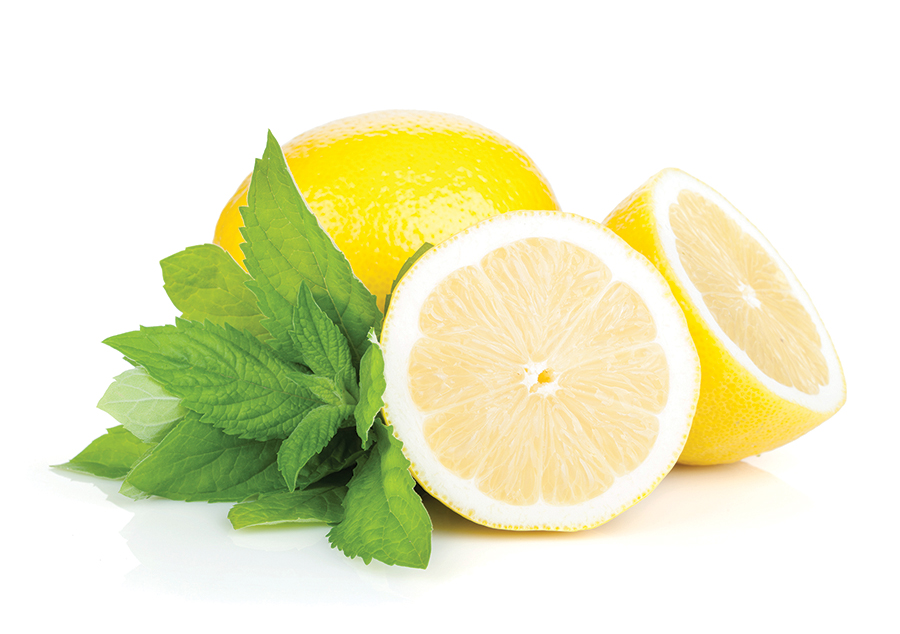 1. Mix tea, rums and vodka in a pitcher.

Gayvin Powers is author of The Adventure of Iona Fay series and writing coach at Soul Sisters Write. She can be reached at hello@gayvinpowers.com.