Media rooms come and wine cellars go, leaving turn-of-the-century cottages the true jewels of Pinehurst. Not that James Walker Tufts would recognize anything past the front door of Sycamore Cottage, where a yesteryear exterior surrounded by a well-tended garden becomes a study in clean, modern lines interspersed with textures bathed in Quaker gray.

Who wrought this environment?

A new Pinehurst demographic: career couple, well-traveled, no kids, who retired early from tech companies located in frigid urban jungles. He plays golf, she indulges a passion for art, perhaps via interior design. They cook in tandem, entertain, participate in social/cultural events.

They are busy, happy, productive.

Their home will be a showplace — but tasteful, low-key, top-quality.

“We’re the putt-and-putters,” says Roxanne Vaitkus. “My husband (John Hagstrom) putts and I putter around.” 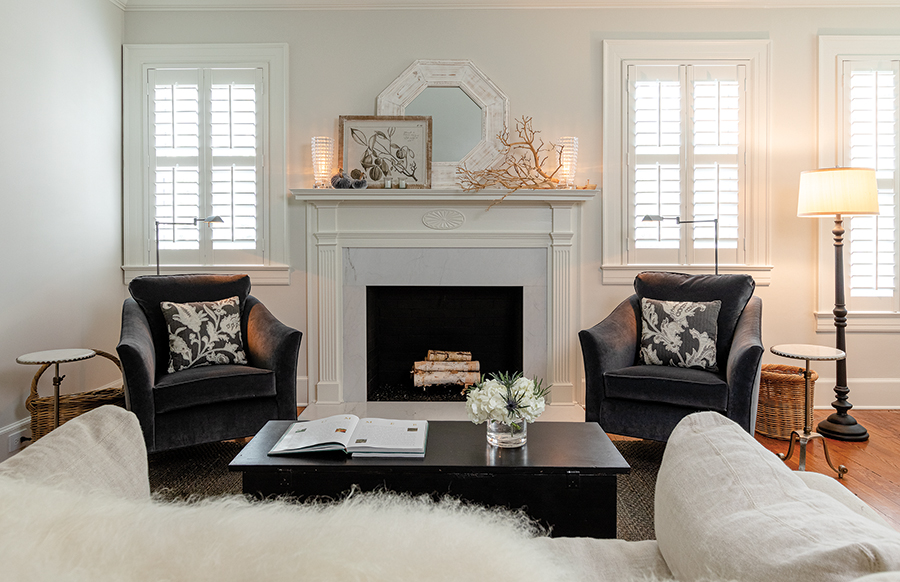 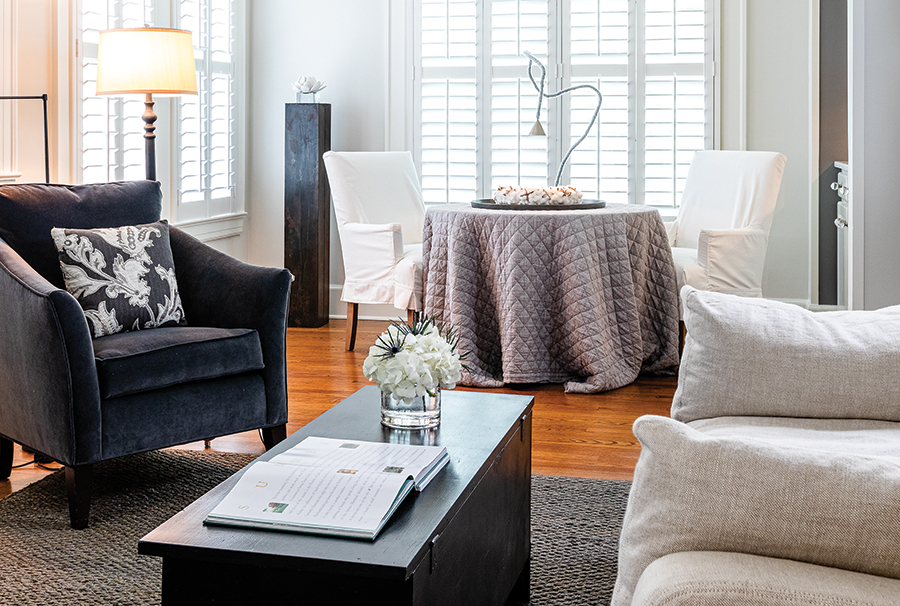 How they came to Pinehurst in 2016 reads like a fairy tale for couples of a certain age.

Roxanne and John lived in a Chicago suburb, where they renovated a historic craftsman-style home built in 1928. They knew the ropes. In 2012, the retirement subject came up.

“We should do something different,” Roxanne suggested. Like buying a beach cottage in  Carmel-by-the-Sea, California. Three years later they sold it during a real estate boom. Where now?

Maybe Palm Springs. “We couldn’t find anything, and it got really hot,” Roxanne recalls.

The couple had visited Pinehurst, where John played golf and Roxanne rented a bike to putter around the village. This time she sent him ahead to scope out possibilities.

The very day he arrived, Sycamore (also called Welcome Cottage) went on the market. “He knew I’d like it.”

They could walk to the village. The walled garden visible through the over-the-sink kitchen window was absolutely adorable. The master suite, created by removing a wall between two bedrooms, was on the main floor — a must for retirees. Roxanne could have a potting shed. Prices were good, compared to other areas.  Best of all, previous owners had completed the major overhaul, including systems, leaving only cosmetic details to be addressed.

Roxanne: “John put in an offer. When I came out and saw it I said, ‘You really do know me.’” 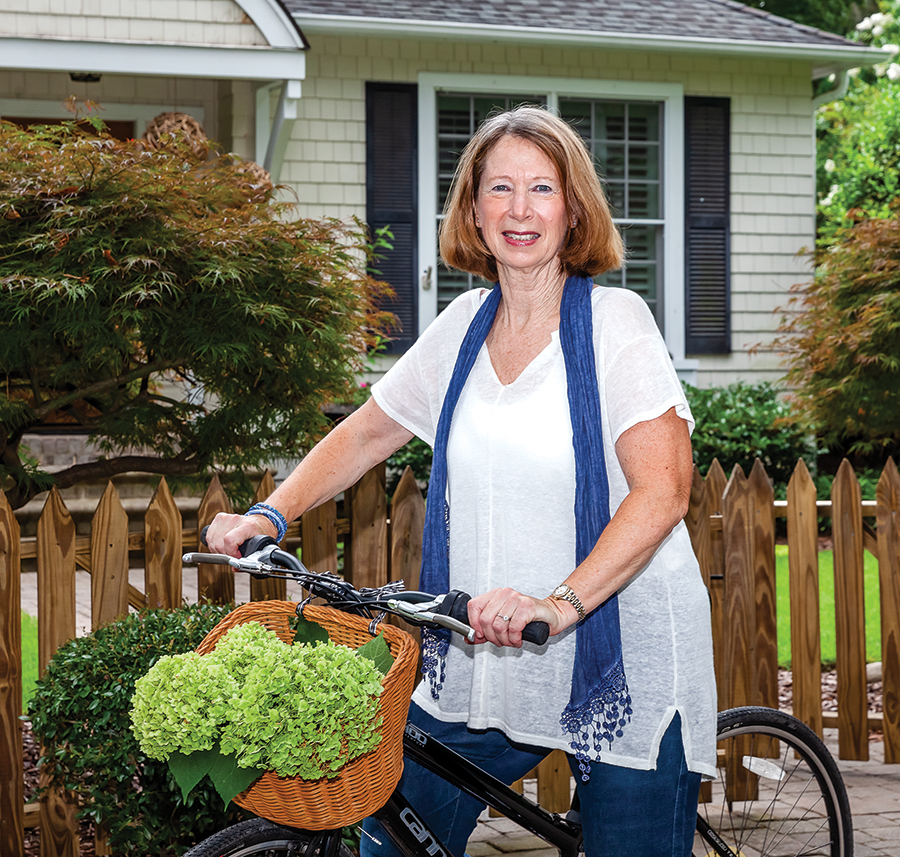 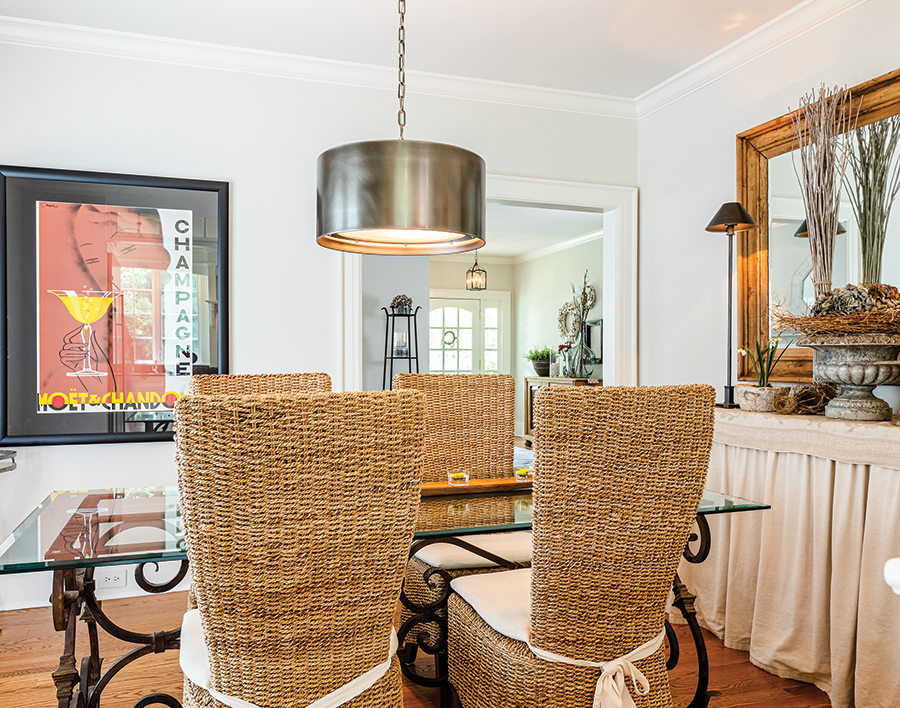 Their only concern was living, for the first time, some distance from a big city.

Now, the kicker. The buyer who snapped up the Carmel beach house wanted all their furniture. Roxanne and John had 10 days to vacate.

What fun . . . to putter through Habitat, estate sales, High Point showrooms, antique shops, fabric outlets feathering a retirement nest. They rented a house nearby while improvements in the bathrooms and elsewhere were made, doors replaced, moldings replicated and a roomy, south-facing porch with glass and screens added onto the back.

“This is my favorite room,” Roxanne says. “We had one like it in Chicago.”

Here, they lounge on a sectional sofa (gray, of course) and eat at a gray-washed wooden table. Even the carport visible through the porch window wall is a vision in white, vine-covered  trellises.

Sycamore Cottage, built in 1896, probably had a sitting room, several bedrooms, small dining area, sun porch and kitchen on the main floor. Not all the cottages had eating and cooking facilities, since seasonal tenants took meals at the hotel. Upstairs, more bedrooms, perhaps for servants, in an attic-like space with angled ceilings.

From documents on file at the Tufts Archives, it appears the cottage was rented out until 1918. Dr. Walter Page (Doubleday Publishing empire) “and household” arrived in December 1912 for the winter social season, according to the Pinehurst Outlook. In 1934, a fire destroyed most of the house, which was rebuilt by then-owner B.U. Richardson, who used an insurance payout to modernize, especially the bathrooms. “Slop buckets” listed on an early rental check list were replaced by porcelain “lavatories.” Shingles replaced lap siding, but charred attic beams remain intact. 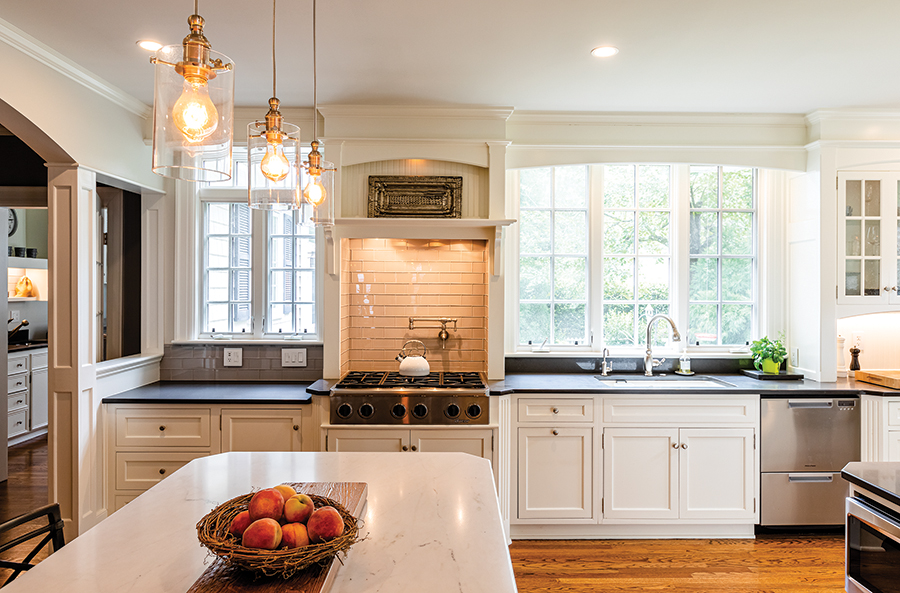 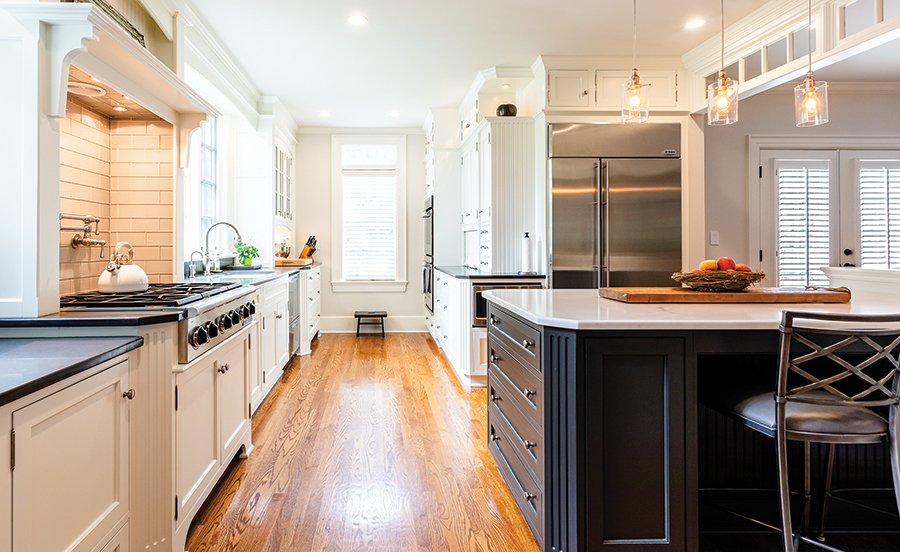 The floor plan in place when Roxanne and John took over bears little resemblance to the original. “Open but not wide open,” she describes it. Walls have been halved or removed for clear sight from the kitchen, at the back, to a conversation cove (originally a porch) with built-in cabinetry, at the front. In between, a compact dining room and sitting room with the original fireplace, which sports a new hearth made of white Lincoln Memorial marble, quarried in Colorado. Furniture-style kitchen cabinets were retained, painted white. Across from the sitting room, a den with giant TV was chosen because it receives little natural light. Roxanne calls it their cocoon. In keeping, the furniture darkens, beginning with an antique hickory cabinet-bar from France, one of the six pieces she shipped east.

Rugs throughout are simple, woven, striped or plain neutrals. 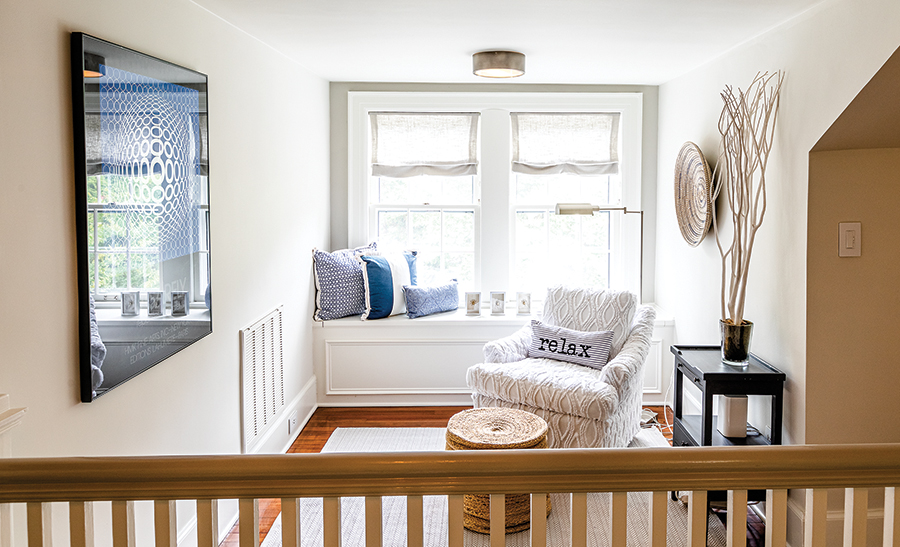 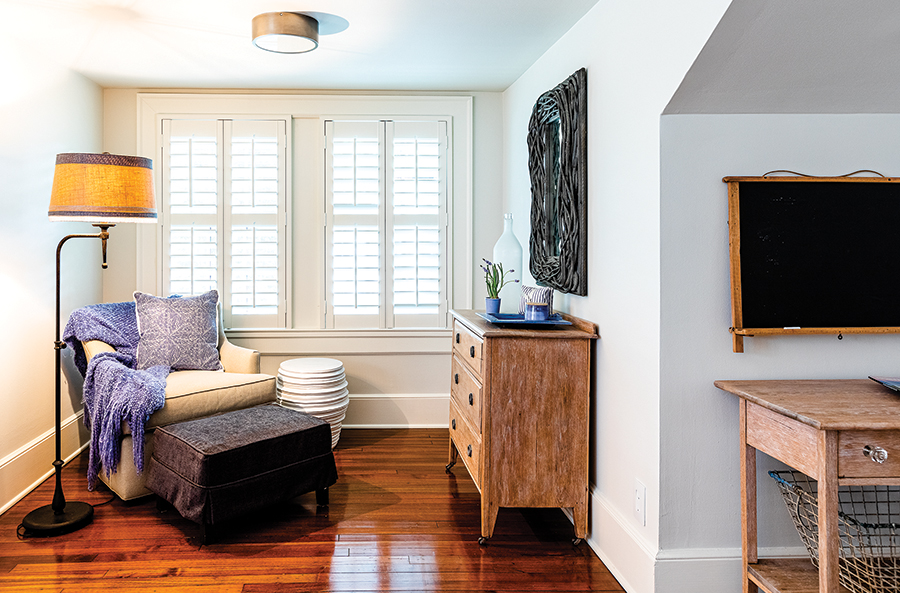 Roxanne prefers contorted metal bed frames and mixed-media light fixtures, many with an element of surprise. “I call it playing with texture,” which might include dried flowers from her pollinator garden, or birds’ nests. In the dining room, a wicker circle hanging from the ceiling drips crystal teardrops. The main floor powder room has a massive, bumpy-textured crystal bowl for a sink. The master bedroom light fixture is covered in wooden beads for a serpentine effect.

Surprises don’t stop there: A lamp base came from a Parisian bridge. Roxanne’s breakfront is draped to the floor in embroidered natural linen. Flanking it, two cylindrical baskets hold thousands of corks from good wine consumed on the premises. The base supporting that plate glass in the dining room originated as a French baker’s table. For a centerpiece Roxanne uses a 3-foot wooden baguette board, which can be filled with seasonal fruit or decorations.

A rough ceiling tile from an old general store in Iowa texturizes a blank spot over the range in the galley-style kitchen. John compares an upstairs stall shower done in black with chunky, metal fittings to a bank vault. Even the laundry room has shadowy gray stripes painted on the walls and gun-metal gray appliances.

Nothing looks better against gray than pale knotty pine. Another of the six holdovers — perhaps Roxanne’s most stunning piece yet tucked in a back hallway — is a glass-front buffet cabinet from the French countryside, displaying small treasures.

Except for occasional streaks of blue and a stylized wine poster, Roxanne has avoided color completely.

Her next puttering will be for art, maybe not gray but surely calm, soothing, with Zen that matches a Sycamore Cottage Mr. Tufts could never have envisioned.

“Modern, but old,” Roxanne calls it, and pedals off in search of another treasure.  PS 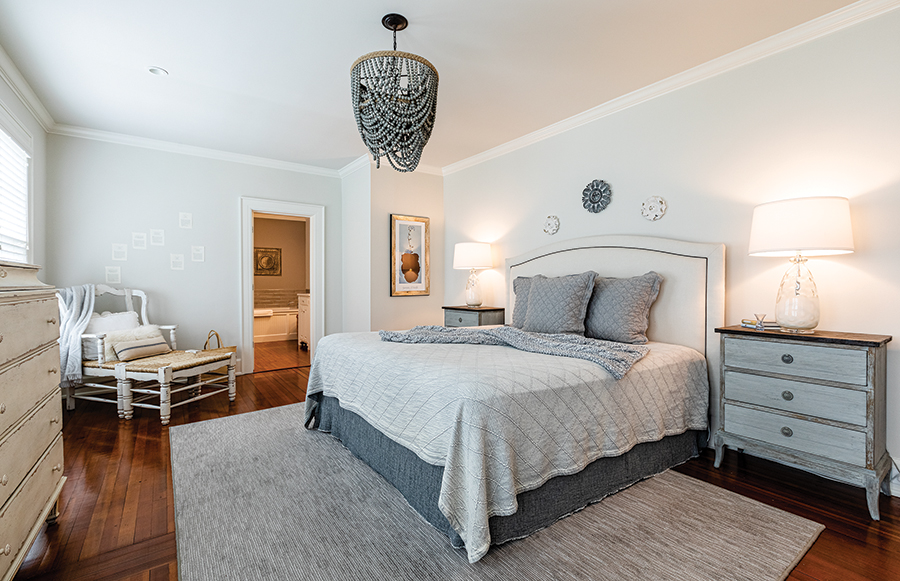 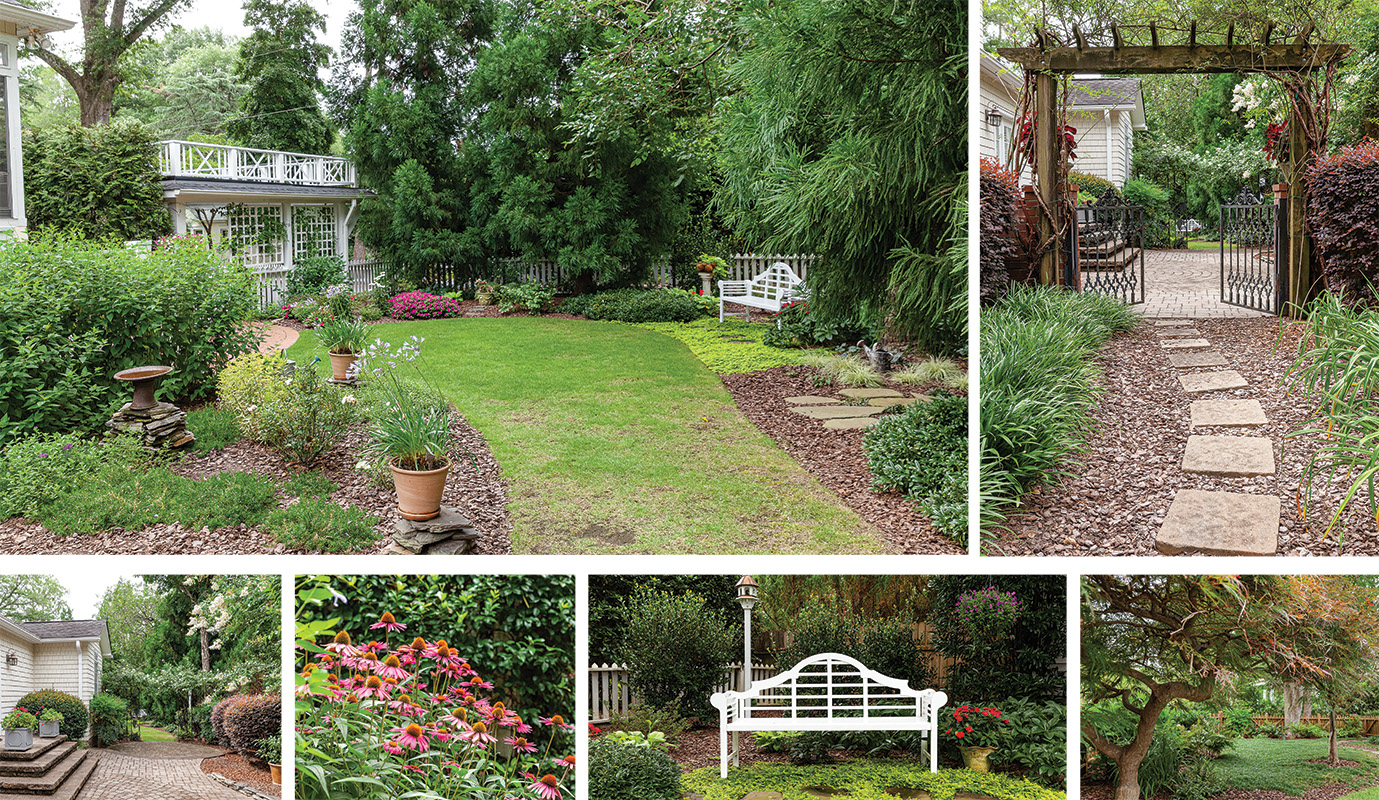 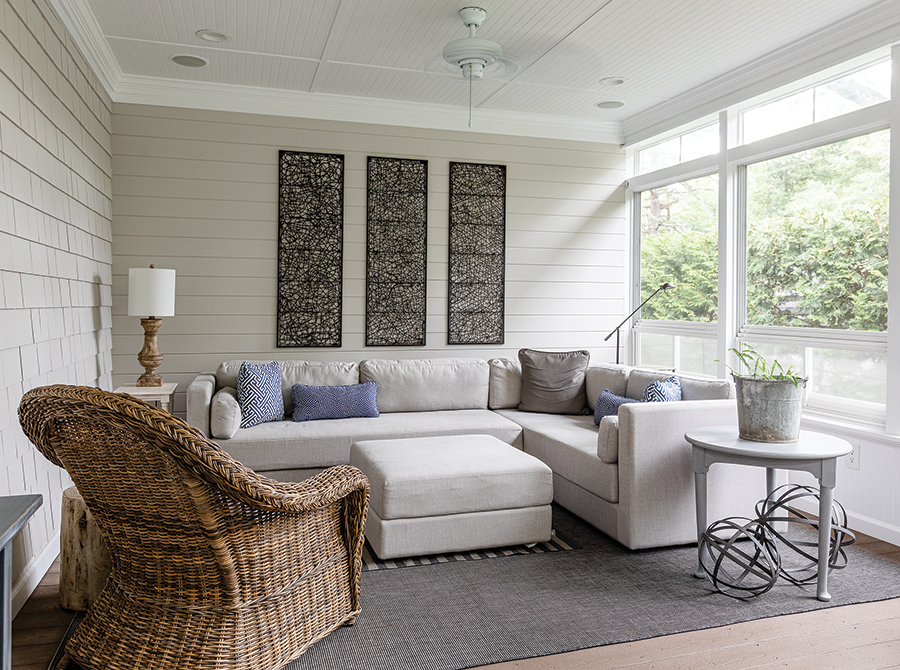 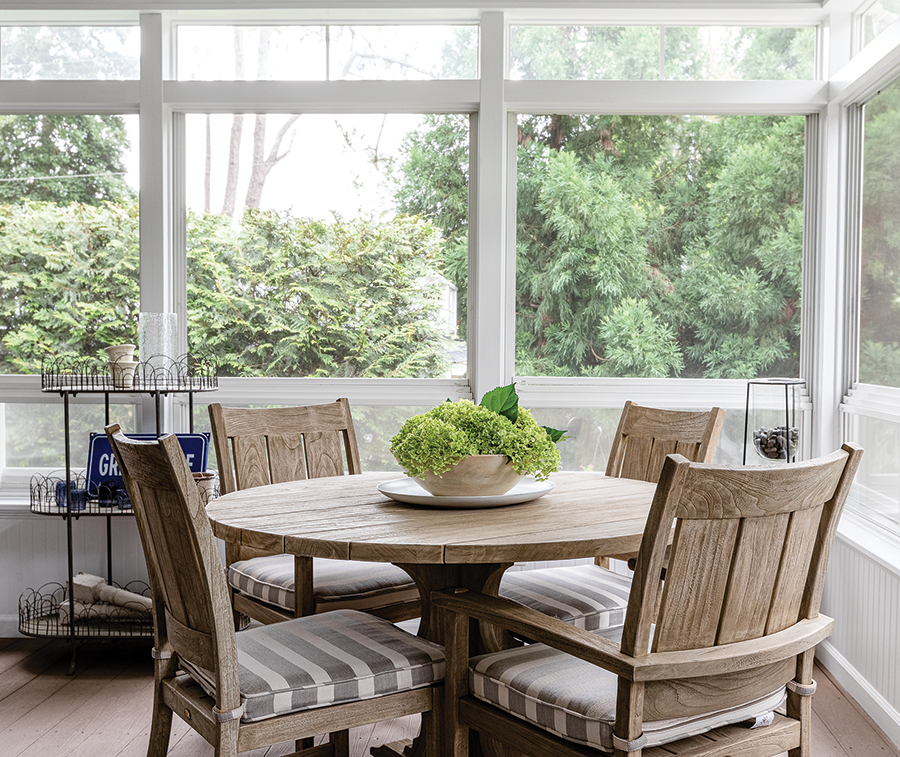