Return of the Native

What’s in a name?

Go forth, they were challenged, and shock the Georgians, the Taras, Colonials, Tudors, saltboxes and ranches tricked out in cherry highboys, mahogany dining tables, cut glass lamps and brocade upholstery. Out with the drapes. In with the light. Disciple Lowenstein shook up Guilford County while, in 1958, Hayes settled in Southern Pines, built himself a house in the genre’s extreme, opened an office with Calvin Howell, and began designing residences in stark contrast to the brick mansions and summery cottages à la Aymar Embury II. Soon after, Cecil Beith, a founding member of the St. Andrew’s Society of N.C., commissioned a residence on a 2-acre corner lot in Knollwood, where it appeared less Martian than those Hayes built in Weymouth. 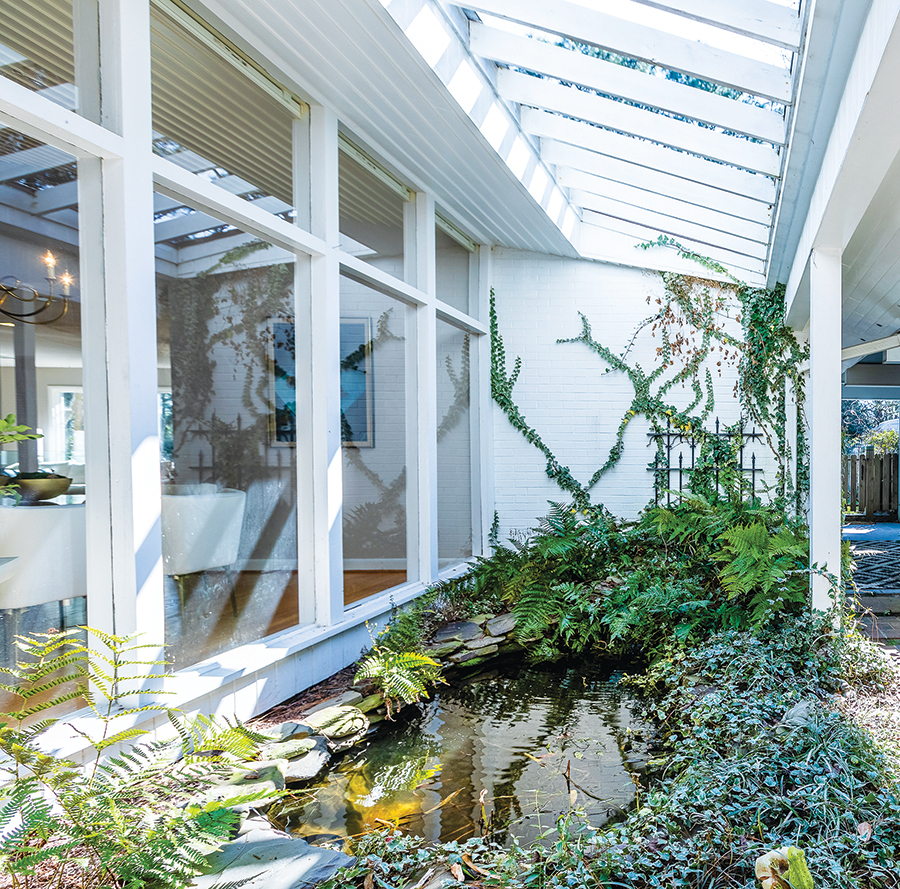 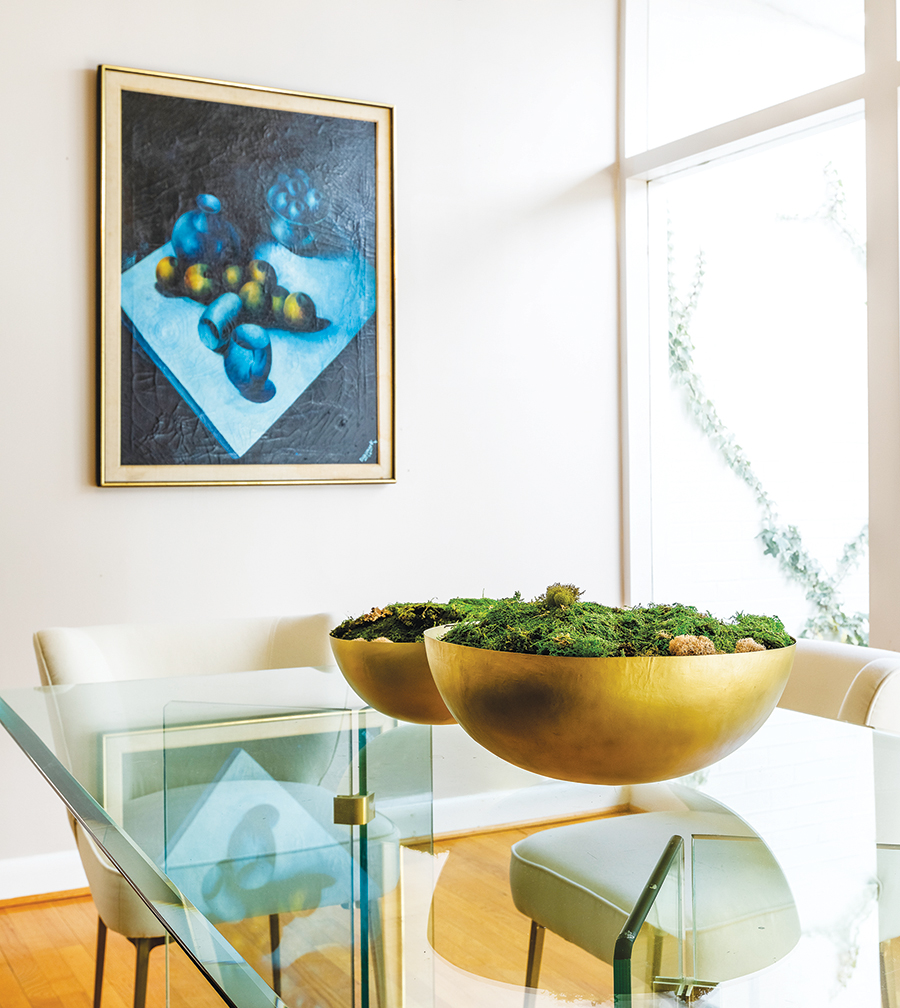 Now, after several ownerships but minimal renovations, this Hayes creation, home to bachelor Guy Bailey, speaks modernism starting at the front door. To the left, an exterior wall composed of slate plates laid horizontally and vertically form a decorative pattern. To the right, a goldfish pond with running water. The window wall rising above it reveals the dining room, furnished with a glass table and clear acrylic chairs which, in their transparency, almost levitate. Pale oak floors need only a few area rugs, also pale. In the vestibule, grasscloth wall coverings, a sleek black lacquer case piece and a watery blue painting in a floating frame set an immediate tone — followed by a surprise:

The formal (as opposed to family) living room ceiling is composed of redwood slats, painted the color of beach sand and installed on a slant.

Clean lines. Simple forms. Light. Abstract art. White, black, shades of gray, cream, vanilla, occasionally navy. A few books and plants, no clutter. Windows throughout, except for over the kitchen sink, are floor-to-ceiling, most uncovered. Bailey watches deer go by from a picture window set into the master bathroom wall. 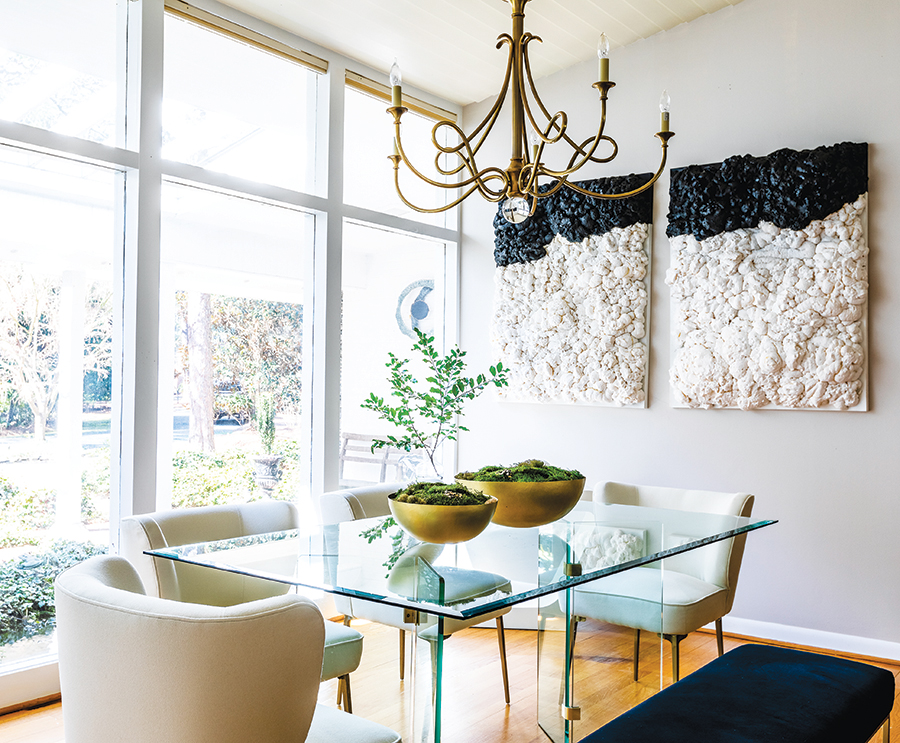 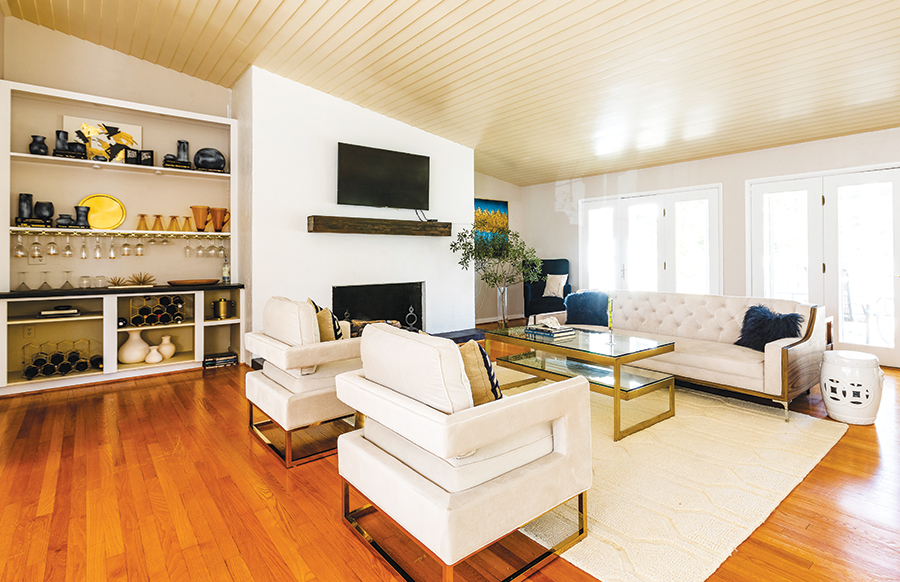 Bailey belongs to a select group of mid-life or retired native-borns who have returned to Moore County. “We lived on Country Club Circle, near the Elks Club, in Judge McConnell’s house,” he says wistfully. “I realize now how wonderful it was to grow up in a small community.” His parents owned clothing stores on Broad Street, The Men’s Room and Fancy This. Bailey graduated from Pinecrest in 1979, tried college, worked in fashion/fabrics, lived in Charlotte, where he married and raised two sons.

In 2017 a series of life events (and his elderly parents) drew him back to Southern Pines. But, realizing that people are defined by their digs, where should he live?

“I wasn’t interested in building . . . we’d done that,” Bailey says. He looked around, mainly lakefront properties in Whispering Pines and Pinehurst. A friend discovered the Knollwood house which, coincidentally, belonged to the parents of a high school classmate. Bailey was familiar with the area from playing golf at Mid Pines Inn and Golf Club and visiting Peggy Kirk Bell’s family.

“I’ve always loved Knollwood Heights . . . it’s the antithesis of a typical Moore County neighborhood. When I walked in the house I didn’t want the Realtor to see how excited I was.” 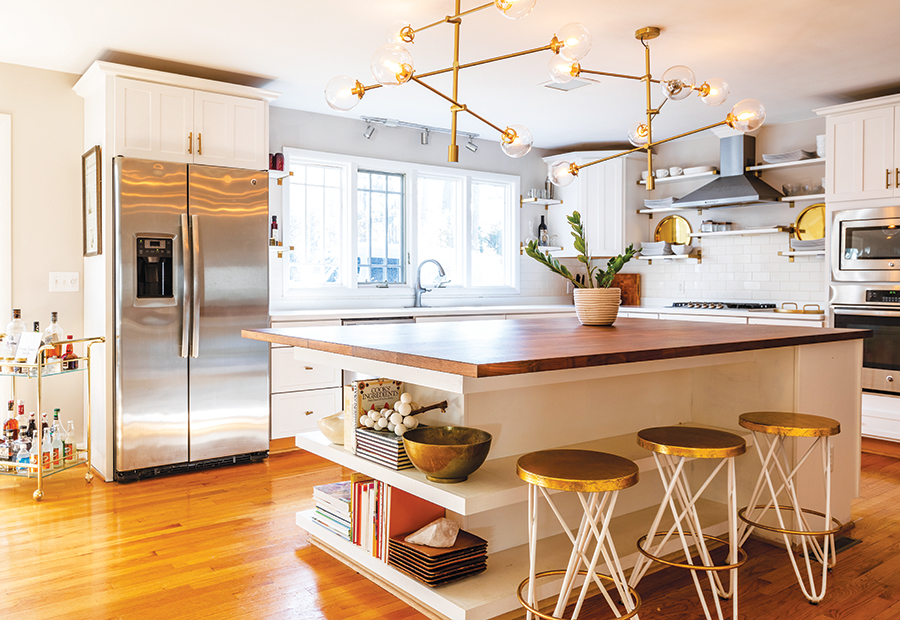 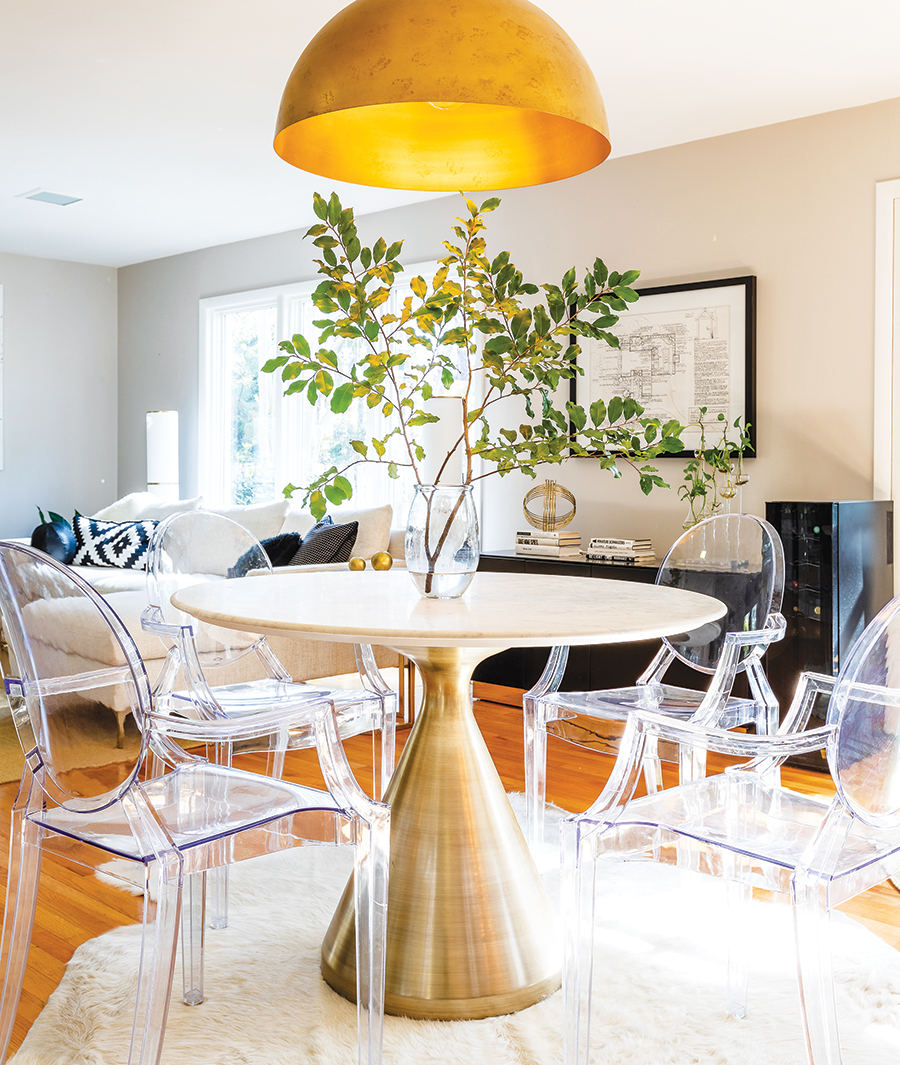 The house, listed at 3,587 square feet, seems larger because space is lavished on living areas, not bedrooms, which suits Bailey fine. “I get up, shower, get dressed and leave.” Beyond the “formal” living and dining rooms (with fireplace and built-ins) is an enormous undivided kitchen-eating-relaxing room, nearly 60 feet long, accommodating an 8-by-10-foot island, “where we gather.” Bailey likes to cook, necessitating a few adjustments in the kitchen, namely swapping a flat-top electric range for natural gas. To further increase the spaciousness, Bailey removed a wall surrounding a stairwell leading to the finished basement, allowing even more light to stream through.

The 40-foot shallow lap pool was a huge attraction, as was the landscaping planned strategically to screen off neighbors.

“I love the seclusion so close to a main road,” Bailey says. And, he loves poring over Hayes’ renderings, which he found rolled up in the crawl space.

The basement appealed to an alter ego, eons from modernism. “My man cave,” Bailey calls the underground room containing remnants of his city life and homes: a pool table, office equipment, sports stuff, easy chairs, plaids and a worn leather couch for napping. 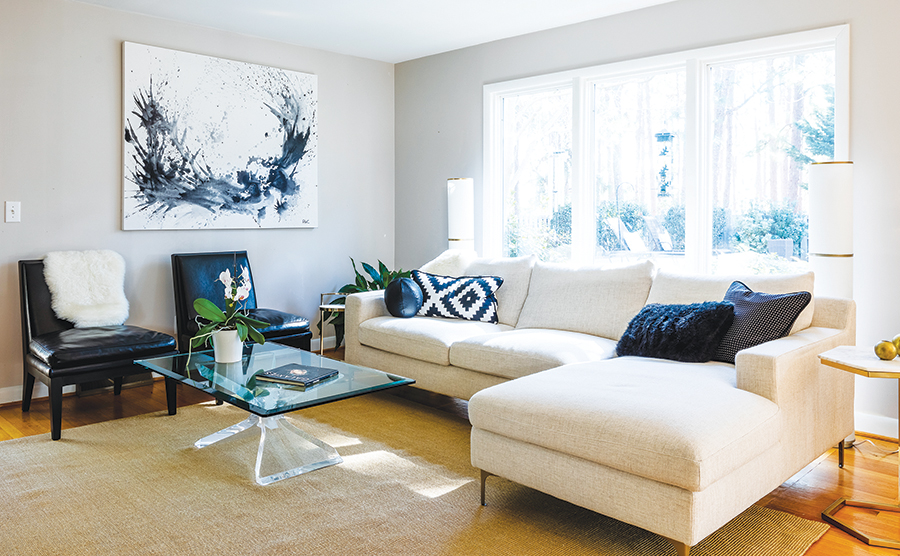 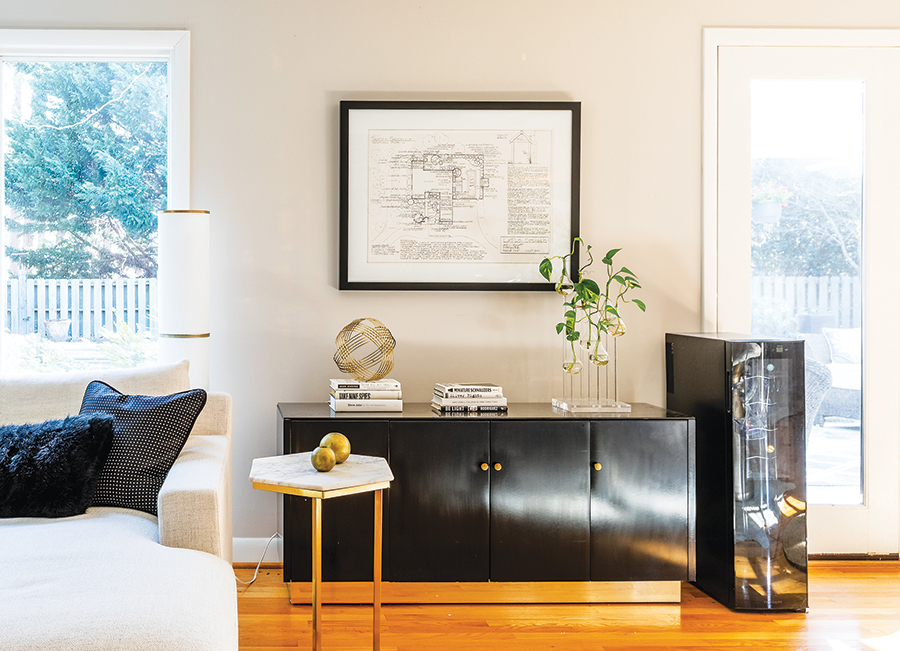 Arriving with virtually no furnishings was advantageous, especially since Bailey’s sister, niece and friends volunteered to scour Habitat and Designer’s Showcase for modernist period pieces — many large and showy like the circular étagère, perfect for a wide-open wall in the formal living room.

“I’m not an antiques kind of guy,” Bailey admits, a good thing since family heirlooms “went to the girls.” Exceptions: One hallway is devoted to photos of his children. His grandmother’s set of amber glassware lines a shelf. Otherwise, he forges boldly into abstract art; niece Grace Crawford contributed several sculptural, dimensional hangings made from insulation sprayed on canvas, then painted. Other canvases, some encrusted with sparkly granules, add the only primary colors in an otherwise black and near-white environment where Bailey feels comfortable, after years in high fashion.

In a period piece designed by a notable architect, little things still count. Bailey loves that a door in the master bathroom opens out onto the lap pool deck. Kitsch gets a nod from the white fur bedspreads. And, since he believes Hayes planned this house for entertaining, Bailey enjoys taking advantage by letting the extended family spread out on holidays. 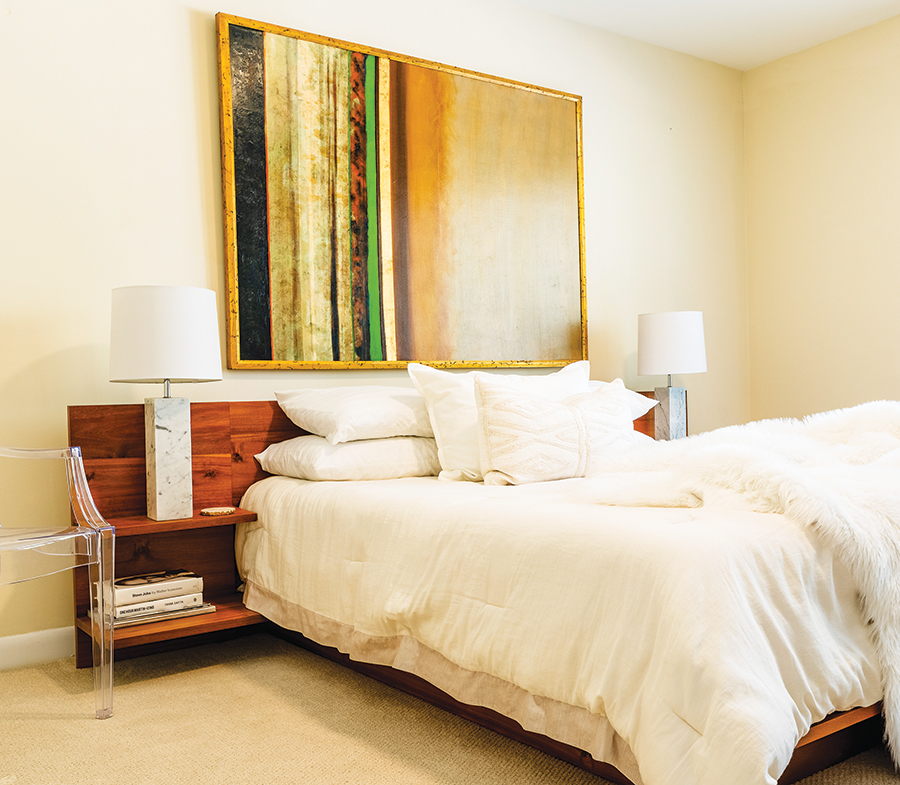 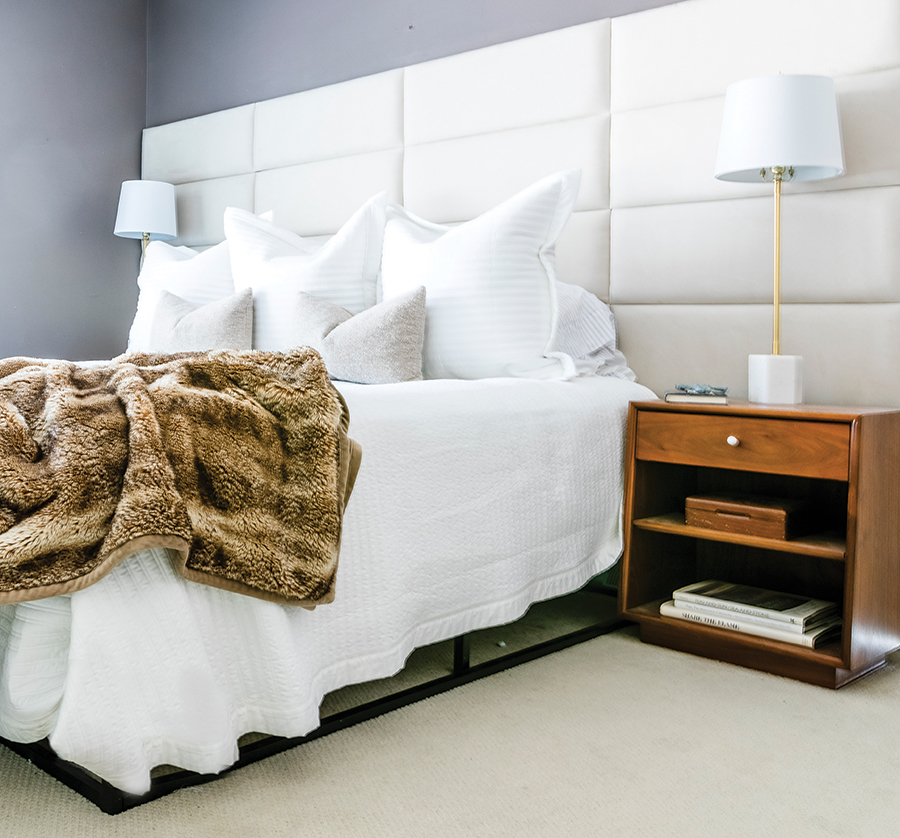 Architecture and décor styles go through a process, from avant garde/trendy to commonplace, then classic. Still pre-classic, mid-century modernism paired with minimalism appears fresh as the azaleas currently ablaze in Knollwood. After four years, Guy Bailey has settled into his stunning surroundings. He acknowledges the serenity simplicity encourages. Practicality, too; open spaces and uncluttered surfaces are easy to clean.

But, should nostalgia surface, Bailey can retreat to his clubby, sporty, leather-and-plaid man cave; the best of two worlds under one roof.    PS