At first blush, Jason Harpster’s greenhouse is unremarkable. It’s smallish, with opaque siding, exhaust fans whirring, and a door not visible streetside. Inside is another story.

His West Broad Street greenhouse is populated solely by orchids, well over 100 plants mostly being coy with their blossoms on a warm summer morning. Species native to nearly all continents of the world hang vertically from a series of parallel horizontal rods lining the walls of the greenhouse, remarkable in their mounts using materials that mimic their natural habitat, like bark, sphagnum moss and coconut matting.

Inconspicuously nestled against a hedgerow mere steps across the asphalt parking lot of his family’s business, Central Security Systems, the greenhouse is Harpster’s other office, designed and built by his father, Dick, and him. Sporting a ubiquitous resort-casual look in khaki shorts and, appropriately, an orchid polo shirt, sipping a late breakfast concoction of spinach, bananas and seasonal fruit in his favorite beer mug, the orchidist’s scientific bent takes over. Sounding professorial, he naturally uses the Latin-based language of orchid nomenclature, even after acknowledging layman’s terms would be easier for most to process. 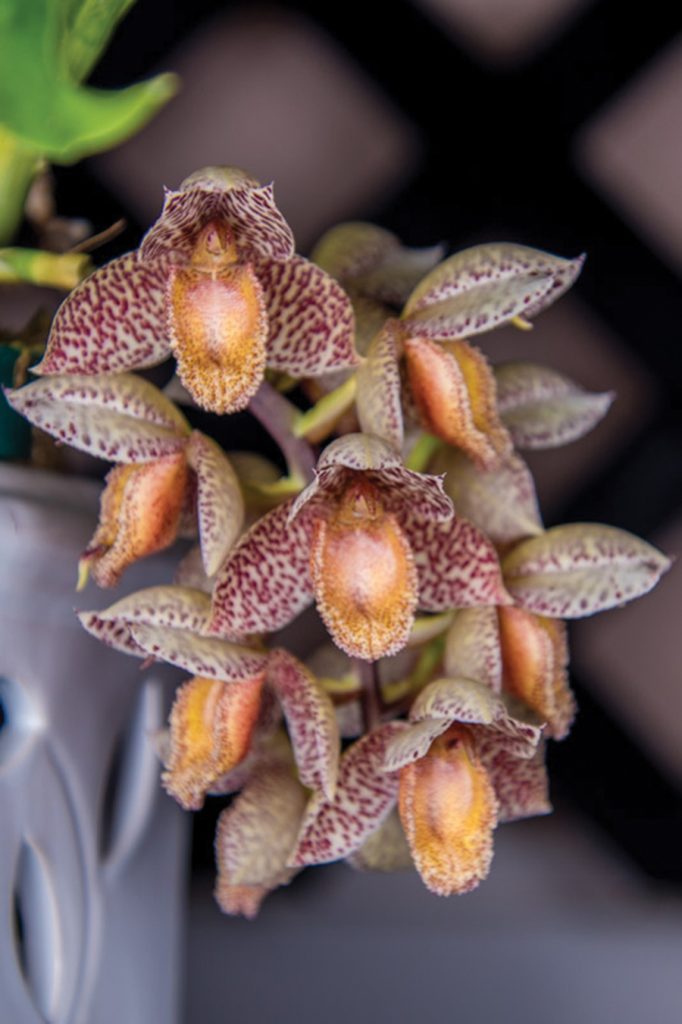 This is the steamy place where Harpster makes pollination magic and begins the expectant watch for plants’ ovaries to swell, a bulge in the flower stem indicating that fertilization has taken place and seeds are on the way. Harpster snips and ships ovaries ready to burst forth to a lab that will harvest the tiny seeds. Given the life cycle of a typical orchid from seed to blooming plant, it will take five to seven years to see its first bloom.

This was the process, he explains, that resulted in a new hybrid orchid that honors the very town in which it was conceived, Catyclia Leaf Hopper “Southern Pines” HCC/AOS, which in June made its showy green and fuchsia debut, earning a highly commended certificate at Greensboro’s Carolinas Judging Center, sponsored by the prestigious American Orchid Society.

The inspiration for assigning the common name for his hybrid creation came on a trip he and his wife, Keely, a horticulturalist at Sandhills Community College, took to the International Lady-Slipper Symposium in Florida in 2012. “I met an idol there,” he says of symposium speaker and botanist Franz Glanz. Harpster learned why the name “Wössner” appeared in dozens of Glanz’s hybrid orchids, many of which Harpster counts among his favorites.

“I loved that he named the plants after the region that he came from (in Germany), rather than naming them after himself,” he says. By honoring his hometown of Southern Pines in his hybrid’s name, Harpster is acknowledging the support he has felt here since childhood. “Being part of the community and giving back is a big deal for me,” he says. 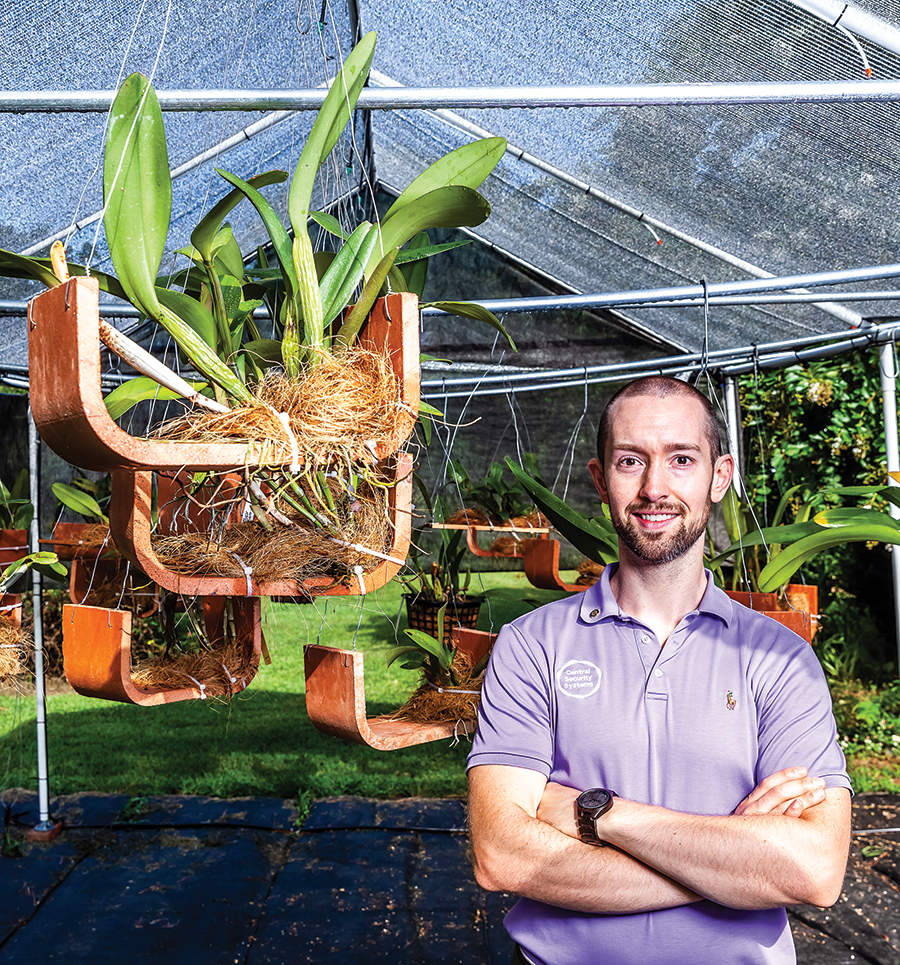 Harpster is active in the Southern Pines Business Association (past president), Rotary Club, and the Eagle Scout review board, the latter a position he was recruited for by mentor Don McKenzie, one of the leaders who facilitated the young Harpster’s earning his Eagle Scout award at age 17. “One of the things I love about Southern Pines is that the mentors who guided me are still here, literally across the street,” he says, pointing to McKenzie Photography just across Vermont Avenue.

“I do remember he was always very focused,” McKenzie says of Harpster. “Every rank in Scouting involves service to others, as a troop and as an individual.” The philosophy germinated along with Harpster’s interest in plant identification. He realized, “Hey, I’m good at this. I had a knack for it, and I enjoyed it more than almost anything else in Scouts. It got me outside and taught me a lot of passions.”

Harpster’s greenhouse treasures carry monetary value, but he has no interest in selling orchids, content with his avocation remaining just that. The greater value is his attachment to the plants, as passionate as if they were his pets. In fact, another of Harpster’s fascinations is breeding tropical fish.

In the lobby of Central Security, visitors are treated to a stunning 300-gallon aquarium full of dozens of African Cichlids, vibrant yellow fish and blue fish in various sizes swimming against a dark backdrop. The lighting is dramatic; the look theatrical. And like the orchids, they prove to be a science-begets-art exemplar.

Harpster points out matter-of-factly, “They are maternal mouthbrooders. The female scoops up her fertilized eggs in her mouth and then in about three weeks, out swim the babies.” 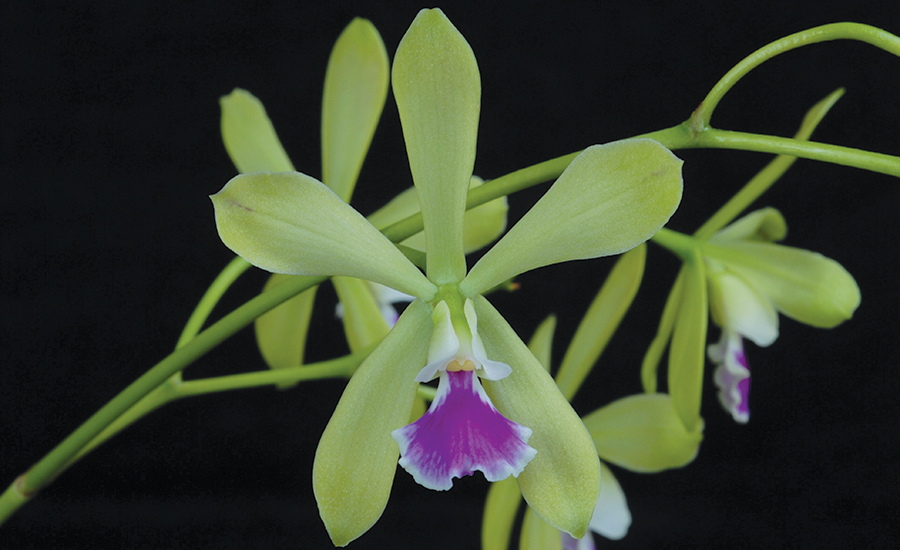 It’s an interest dating back to a childhood job cleaning the family aquarium. In college, he was once presented with the choice of purchasing an aquarium or a television for a new apartment — he came down squarely on the side of the fish. “It became the centerpiece of my apartment.”

While not disparaging anyone who does talk to their fish or plants, Harpster is clinical and scientific in all things flora and fauna, lightheartedly explaining, “I don’t talk to plants or fish. I don’t name the fish. They have proper taxonomic names that they should be called, darn it!” Never content to rest on his laurels, Harpster is engaged in the arduous accreditation process to become a judge within the American Orchid Society, a leader in the kingdom of orchids since 1924 — a process he likens to adding another degree to his MBA.

Some of Harpster’s orchids have found a summer home off Young’s Road in the horse farm setting of Jason and Keely’s backyard, where an awning diffuses light over a series of terra cotta plant holders, repurposed utility pipes where the plants thrive as though they were summering in the tropics.

But then, that’s Harpster’s world.  PS

Amy Griggs has worked as a community journalist and middle school teacher. She lives in Wake County and counts the Sandhills as her second home.