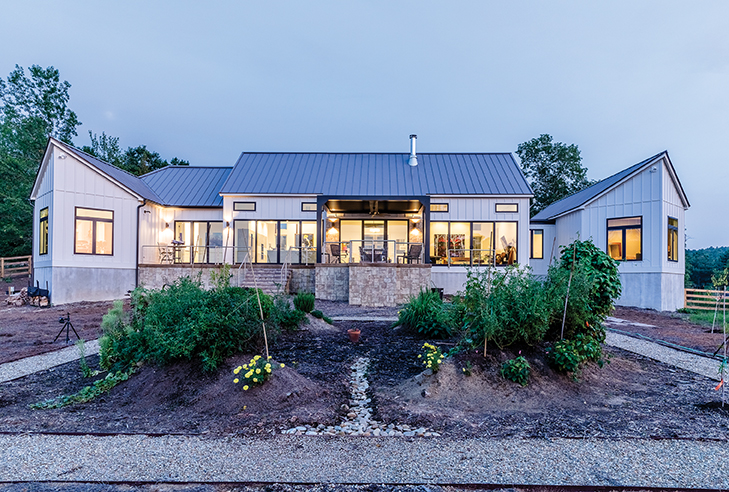 Leonardo daVinci painted portraits and designed military hardware — kitchen appliances, too. He wrote treatises on science, math and life. Thus the phrase “Renaissance man,” a sweeping mantle worn by Dr. Mark Ridinger, a radiologist who practices what he calls the duality of life — physical and spiritual — who grows 10 varieties of heirloom tomatoes, six of peppers and four basils in his organic hugellkulture raised garden bed. A cook who planned an “intuitive kitchen” and bathes in a “wet room” with open shower. An eye soothed by white shiplap (horizontal boards) exterior.

“Increasingly, there is a bifurcation of prognostications of what may come with the development of so-called strong artificial intelligence — AI proponents say it will afford an opportunity for humankind to be free of the yoke of repetition and monotony.”

Interesting people don’t thrive in cracker boxes. Ridinger has designed a lakeside house in West End apart from any in Moore County. A house that leaps forward rather than glorifying the past. A house meriting Architectural Digest over Antiques Roadshow.

A house which appears from the exterior plain, simple, Shaker-utilitarian with Japanese overtones. Nevertheless, Ridinger classifies it a modern farmhouse, the architectural trope popular with millennials. A metal roof, yes, but no wraparound porch and potted geraniums.

Instead, notice two olive trees and two lemon trees facing a low gabion: This retaining wall composed of smooth stones encased in wire cages was used by ancient Egyptians to divert the Nile, later by encamped Romans. His cages stacked two deep stretching 80 feet hold 20 tons of rock. This wall facing the infant olive trees serves secondarily as a solar collector, to warm them come winter. The potted lemon trees, however, will be moved inside the garage to overwinter by a sunny window installed for this purpose. If all goes well, eventually Ridinger will press his own olive oil. A squeeze of lemon juice . . . and the salad’s dressed.

Flowers come from a garden planted in indigenous wildflowers, where he starts the day at 6 a.m.

Which doesn’t leave much time for reading X-rays.

Which is why Ridinger doesn’t any more.

Ridinger grew up and attended medical school in Chicago, followed by a residency at Duke. His family home was traditional, bordering French Provincial, he laughs. North Carolina suited his purposes. During the late 1990s he commuted from Durham to a practice in Pinehurst, staying at the Holly Inn week nights. 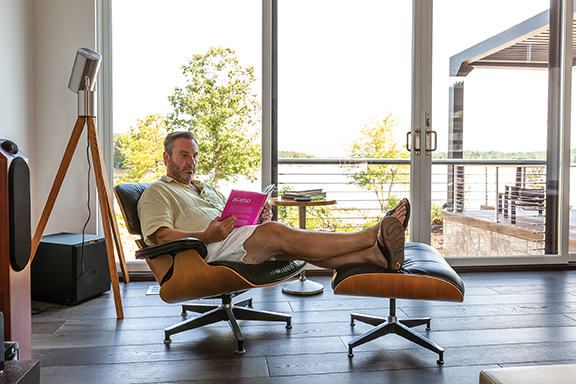 “I got to know the area,” he says. “I was looking for land somewhere in the Carolinas, maybe Chapel Hill. But I wanted to be near water and stumbled upon this place.”

Golf wasn’t a factor. By now, neither is radiology. After his residency, Ridinger co-founded a health care information software company. Its sale, leaving him as chief medical officer, enabled exploration of other interests, primarily design.

The lifelong tinkerer watched his father, an engineer, build radios. His artistic side plays the guitar, collects modern art and interprets living space, believing “as society moves to hyper-specialization, and with the advent of artificial intelligence, the softer human qualities will be in demand.”

In demand — perhaps marketable, with this house as his business card. He feels qualified to consult on the modern farmhouse style, which Architectural Digest describes as a classic motif made inventive and elegant, incorporating timber cladding, A-frame roofs and loft spaces with a sleeker spin . . . streamlined but still connected to its natural surroundings.

Ridinger’s adaptation grew from the site purchased in 2017, which juts out into Lake Troy Douglas, where he kayaks. Fifty-three feet of glass across the living area face north to avoid glare. Myrtle trees planted along the southern border filter light, since only the bedrooms have window treatments. Once inside, any resemblance to a farmhouse, modern or otherwise, disappears. Gasp. 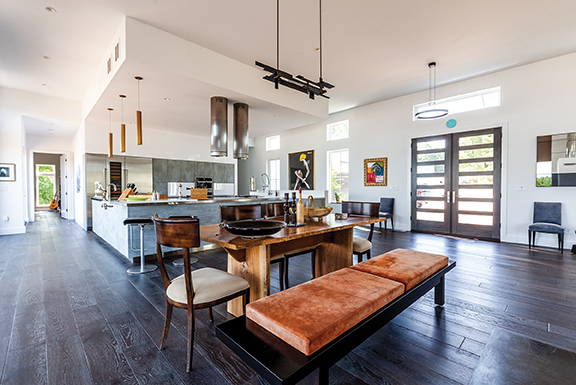 The longitudinal space with 12-foot ceilings divided into living room, dining room and kitchen, all overlooking the lake, is breathtaking in white, black, stainless steel. Gray oak floor. A real Eames chair. Elongated sofa in rust velvet. A sound system with turntable. World War II propeller ceiling fans. Two-sided wood-burning fireplace. A dining table following the Japanese tradition of a thick polished slab, here black walnut, with irregular edges surrounded by chairs on one side, a bench upholstered in apricot velvet on the other, “just to be different.”

Ridinger learned to cook from his Italian mother. “There’s nothing worse than an unintuitative kitchen.” He arranged his in three sections: prep, cooking, cleanup. His range has multiple parts: gas burners, a Wolf induction cooktop requiring special pots, several oven options and a microwave. The range is placed so he will face guests seated at the table as he prepares their meal. A Sub-Zero hides behind flush stainless cabinetry. His cleanup sink is big enough to hold an alligator. Clutter is banned. Tabletop appliances and coffee machines remain out of sight, in “garages.”

No TV chef is better equipped.

The mud room has a doggie bath tub with grooming accessories, for his next golden retriever. 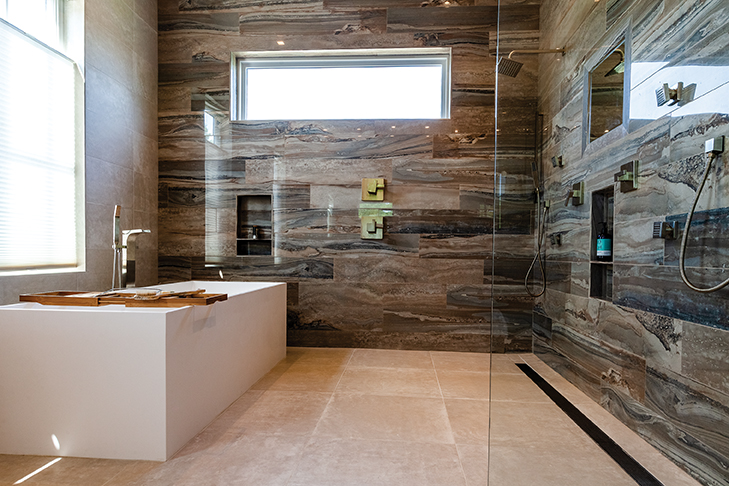 Color? “My plants and art are the color,” Ridinger says. Each painting recalls his life situation at the time of its acquisition. Wall space allows for oversize canvases. One, a stylized grove of sycamore trees, has a spot of turquoise at the edge which he repeats in throw cushions. A lime green ceramic platter punctuates the neo-industrial kitchen. A tall leafy plant grows from gingerroot, available for digging should a recipe stipulate. 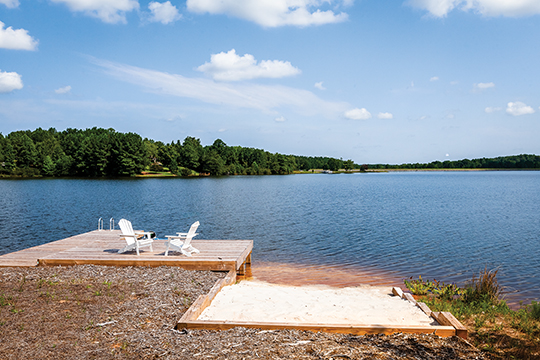 His office juts out toward the lake like a ship’s bow. The guest bedroom, also in this wing, accommodates his sole furniture holdovers: a four-poster made in North Carolina, and a handsome antique reproduction bureau which, in this setting, look like they were relocated from Kansas by Dorothy’s tornado.

Ridinger wanted a master suite in ever-so-slightly softened colors. The gray is earthier, the white less glaring, the floors cherry. He introduces cocoa via a leather chair and wall faux-painted to resemble fabric.

The eye-openers here (aside from artsy female nudes) are the massive sliding barn doors separating the suite from the hallway and, in the enormous bathroom, vanity cabinets conceived by Ridinger as an homage to Frank Lloyd Wright’s Fallingwater residence built over a waterfall in Pennsylvania. Planks of sapele wood are staggered at three levels; one holds a vessel sink, another a drop-in. Stand back and imagine water cascading down the steps.

The result: Californian, likely Monterey on a cliff overlooking the Pacific. In Moore County, perhaps a turning point for farm gentry retired from gritty northern metropolises.

However, Mark Redinger’s highly personal interpretation will not likely be duplicated. It stands a monument to the physician-turned-philosopher seeking freedom, as stated, from repetition and monotony. He feels a Zen vibe in the house that, he says, keeps on giving. True, the process may have been painstaking — persnickety, his word. But for him the finished product justifies attention to many details.