Lulu and The Mull

This is a story about two beautiful dogs, one that I’ve known for a decade, the other for less than an hour.

One is my canine soul mate — my God Dog, as I think of her.

The other briefly touched my soul.

So here’s the tale: It was rush hour and I was running late for an afternoon speaking event. On the horizon, the sky was black,  the first fierce thunderstorm of the season was breaking.

The traffic was heavy. Everyone was hurrying home before the tumult broke.

That’s when I saw the dog. 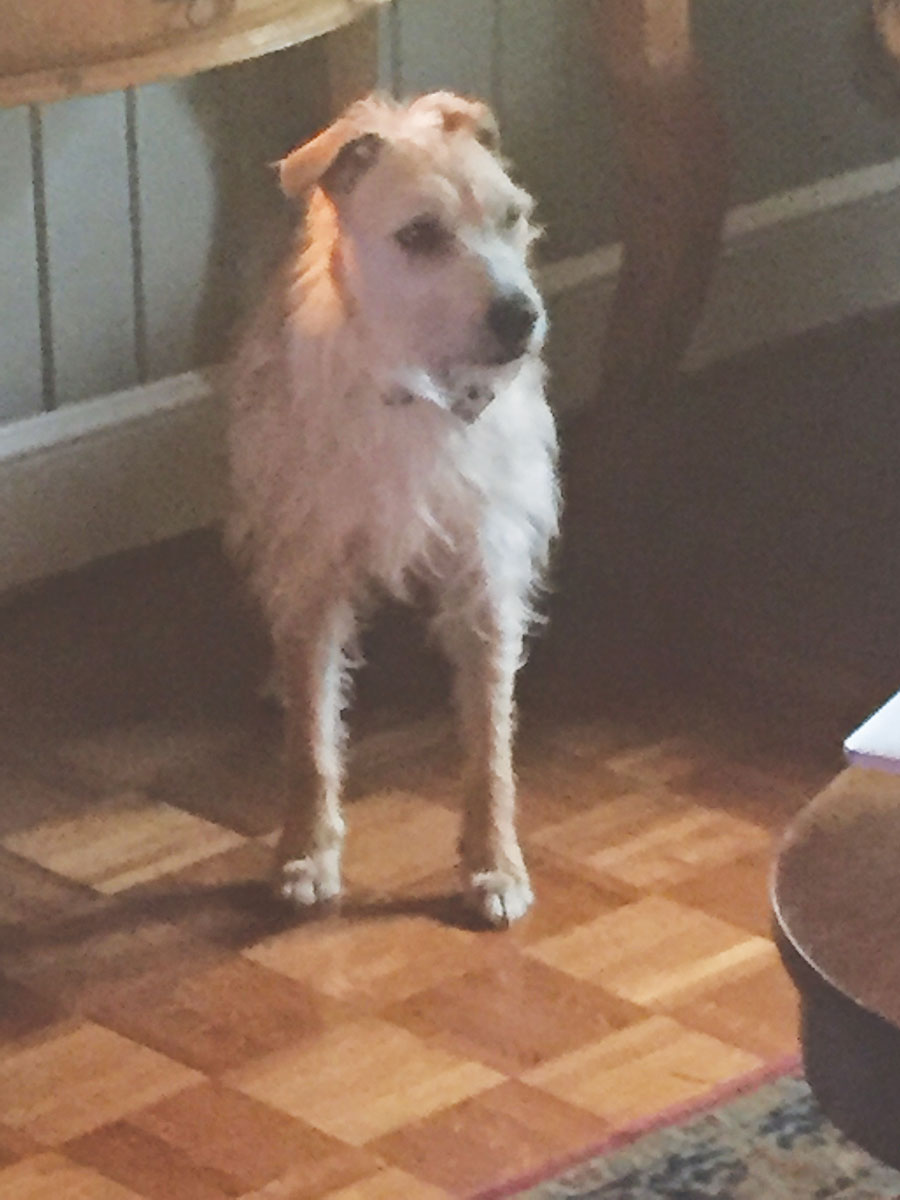 Approaching one of the busiest intersections in the city, traffic zooming in all four directions, a dog bolted across the road two cars ahead of me. Both cars swerved and the driver directly in front slammed on brakes, allowing the dog to barely make the landscaped traffic island.  As I watched, the animal started to cross the oncoming lane, causing a blast of horns and automotive mayhem. One car just missed her, another swerved. the dog jumped back onto the island.

Some things are pretty simple. I stopped my car in traffic and got out, opening a back door, hoping the terrified dog would jump in. She didn’t. She merely stared at me, frightened, panting and exhausted.

Over the decades, traveling hundreds of roads large and small, including in at least two foreign countries, I’ve pulled off busy highways to try and help dogs in distress, not to mention at least one chicken and probably half a dozen snapping turtles.

In almost every case, a good outcome resulted.

That was certainly the case 10 years ago when I pulled into a park to give a talk at a festival  and saw a skinny black dog  bolt across busy US Highway 1 in Aberdeen, narrowly avoiding the wheels of a FedEx truck.

Moments later,  as I parked the car, the same skinny dog — a black pup with a white star on her chest — streaked past me, headed for some kids playing near the woods. An hour later, as I was leaving the park, the same black streak passed again, heading straight back to the busy highway.

To this day, I don’t know why the dog stopped. But she did, whipped around and looked directly at me. We were maybe half a football field apart.

Then she did something amazing. It may have even changed my life. It certainly improved it.

The dog ran straight to me and jumped into my arms, like she’d known me forever. She was filthy, a wiggly pup with liquid brown eyes, a runaway or a stray, the happiest dog I’d ever seen.

I asked some park maintenance men if they knew where she came from or who she might belong to. There was no collar.

“That dog don’t belong to nobody. She’s been around here a week or more,” one of the workmen said. “I think she lives in the woods and eats from the garbage cans. We can’t catch her. How did you?”

“She just came to me when I called.”

He laughed. “Guess that means she’s your dog now.”

I asked the kids by the woods, too. “She lives in the woods,” one told me. “You should see her run. She catches squirrels and birds and stuff. Fast as lightning.”

So I took her to three different shelters in the county. Two were full occupancy. By the time we reached the no-kill shelter in a neighboring county, the dusty pup was sitting on the center console between the front leather seats of my new car, making herself at home. She was actually leaning against me.

The women who ran the shelter gave her a shot of worming medication, a small biscuit and said to me with a smile,  “That dog really seems to like you.”

So I took her home to my cottage and phoned my wife in Maine to let her know I’d found a pup running wild and might need to keep her until I could find her owner.

My wife laughed.  We already had two dogs, a pair of aging golden retrievers.

“Of course you will.”

“Just until I find her owner.”

I bathed the pup.  She hated it but came out shiny as a baby sea lion.

Next I fed her a can of Alpo. She ate the food in three gulps and threw it up with several small animal bones. The girl was obviously a hunter.  I thought of calling her Diana, Greek goddess of the hunt.

That night I heard snoring and rolled over to find the pup lying on her back next to me in bed, head on the pillow, snoring to beat the band. When I spoke to her, she looked at me with the most soulful brown eyes I’d ever seen and thumped her tail.

I ran an ad in the newspaper but never found an owner.

Looking back, I’m certain the universe never intended me to find an owner. The pup had found me.

I named her Mulligan, a second chance dog, or “The Mull” or “Mully” for short. Some people have a God Parent or God Child. I have a God Dog, an animal divinely sent to keep an eye on me.  Dog, after all, is simply God spelled backwards.

She and I have been together over a decade now, traveling pals through life, best friends who have gone down many roads in each other’s company. Wherever I go, she goes – to the garden, to the store, ever watchful, always waiting, ready to ride. The Mull sleeps beside my side of the bed. And when I leave bed well before dawn, my God Dog follows me and my cup of coffee outside to sit beneath the morning stars to reconnect with the universe.

When Ajax, our big retriever that I call “Junior,” finally lumbers out for our morning walk around the neighborhood, The Mull is ready to lead the pack.  Junior is young, spoiled, far too good looking for his own good. He knows four or five good words like “walk” and “Cookie.” But the The Mull hasn’t given up on him, thinks there’s hope for him yet. Mully has the vocabulary of a gifted middle-schooler – or at least telepathic powers.

In any case, she roams ahead off the lead, scouting the world where she once ran wild, seeing everything that moves around us, smiling the entire time. Junior lumbers behind, basically oblivious save for the grazing rabbits in yards, carrying his own lead, impressed with himself, following the family alpha dog.

Ironically, I didn’t have the God Dog with me the afternoon I stopped rush-hour traffic in two directions for half a dozen blocks while trying to coax the terrified dog on the island into my car. Fortunately a woman driving the other way stopped traffic on her side of the island and got out to lend a hand. And a second driver appeared with a cup of water, hoping the dog would pause to drink so we could grab her.

For several minutes — a small eternity it seemed rather hopeless. She ran circles around my car, was visibly tempted to jump in, but eluded our efforts. Finally,  as she rounded the corner for the umpteenth time, I dove and grabbed her by the back leg.

I took the dog straight home.  Mulligan and Ajax warmly welcomed her. But the newcomer was so skittish, she raced behind my den chair and refused to move until The Mull, my wise old foundling, went and sat with her for a spell. It was like watching a family counselor at work, the God Dog doing her thing.

The dog eventually calmed down enough to come out from behind the chair to drink some water and take a biscuit from my hand. I saw a faded tag with a phone number on her narrow collar. Her name was Lulu. The phone number was a Los Angeles number. I called it anyway.

After several rings a woman answered. “Do you have a dog named Lulu?” I asked.

“I sure do,” she said. “You found her? I’ve been so worried. She ran away a when the thunderstorm broke. Lightning struck and she was gone.”

“Well, she’s safe now at our house.” I gave her our address.

She pulled up 20 minutes later, expressed deep gratitude and informed me that she and Lulu were about to relocate to France.

“I can’t believe she let you get near her. She’s terrified of lightning and people. It’s a miracle you could catch her.”

“I had some help.” I mentioned the two angels on the road and the help of Junior and The Mull.

“What a sweet dog. How long have you had her?” she asked.

“Not long enough. Just 10 years.” I told her about saving Mully from a busy highway, joking how it was she who really saved me.  PS