Sandhills Community College’s Landscape Gardening program, the ever-evolving classroom we all get to enjoy, celebrates 50 years

In Japan, there’s an expression you might find brushed on a hanging scroll in any given tea room that speaks to the notion of holding each meeting as sacred:

One time, one meeting.

On a sweltering summer afternoon, the air pregnant with the amalgam of fragrant ginger lilies and the electric hum of cicadas, Westmen takes a walk through the 32-acre gardens and reflects on the journey he started as an SCC Landscape Gardening student in 1978. Renowned for its hands-on approach to learning and its prestigious crop of alumni — two White House groundskeepers and the former director of gardens at Monticello among them — the Landscape Gardening program at SCC recently celebrated its 50th anniversary. As is the case for many who have been a part of the SCC program, Westmen’s story is deeply interwoven with its history. Imagine the wild tangle of azalea and rhododendron roots beneath the floor of the Hackley Woodland Garden, or that of the pine and tulip poplar along the Desmond Native Wetland Trail. The roots aren’t separate from the gardens. They’re one with it.

Westmen intimately recalls the installation of SCC’s first official garden — a sundry collection of hollies donated from Pinehurst resident Fred Ebersole when Westmen was a first-year student — and has had two dirt-laced hands in the beautification and development of the horticultural gardens since he was hired as faculty in 1988. But somehow, perhaps even mysteriously to him, Westmen continues to experience the campus grounds as if seeing them for the first time.

“I never get tired of being out here,” he says. And as the smiling professor winds along the garden paths, it’s obvious that this ever-evolving landscape serves as the fertile ground and classroom from which the program and its students continue to blossom. 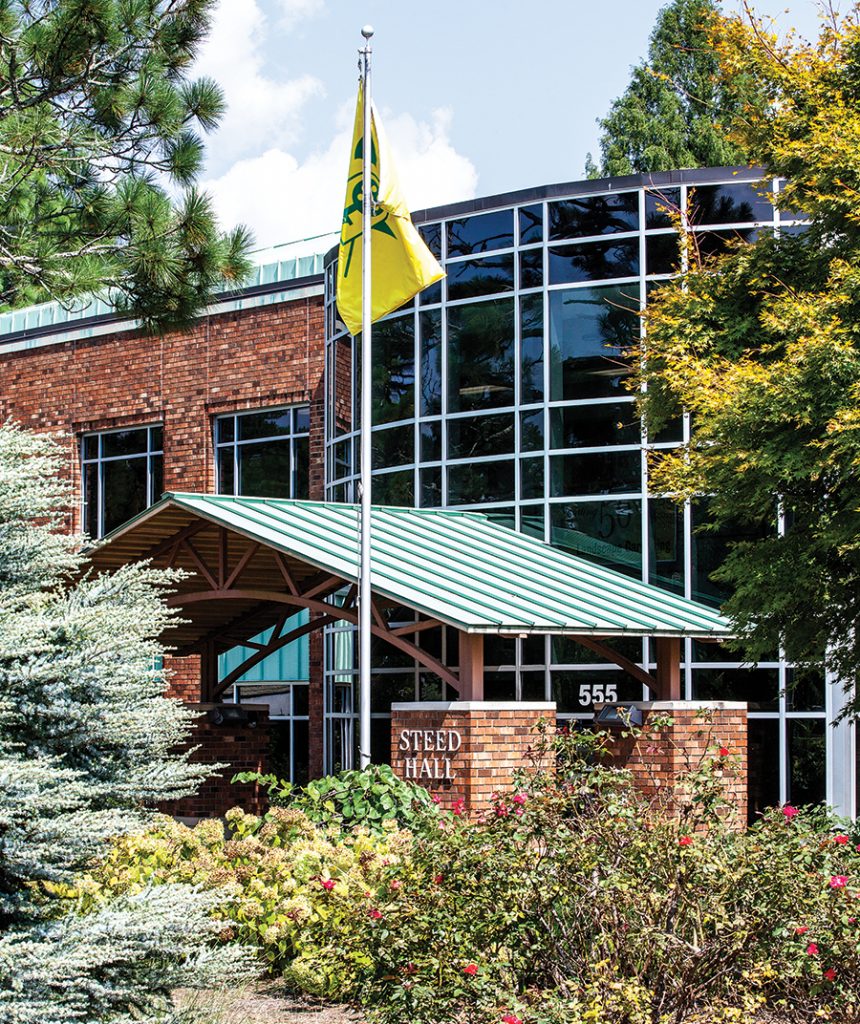 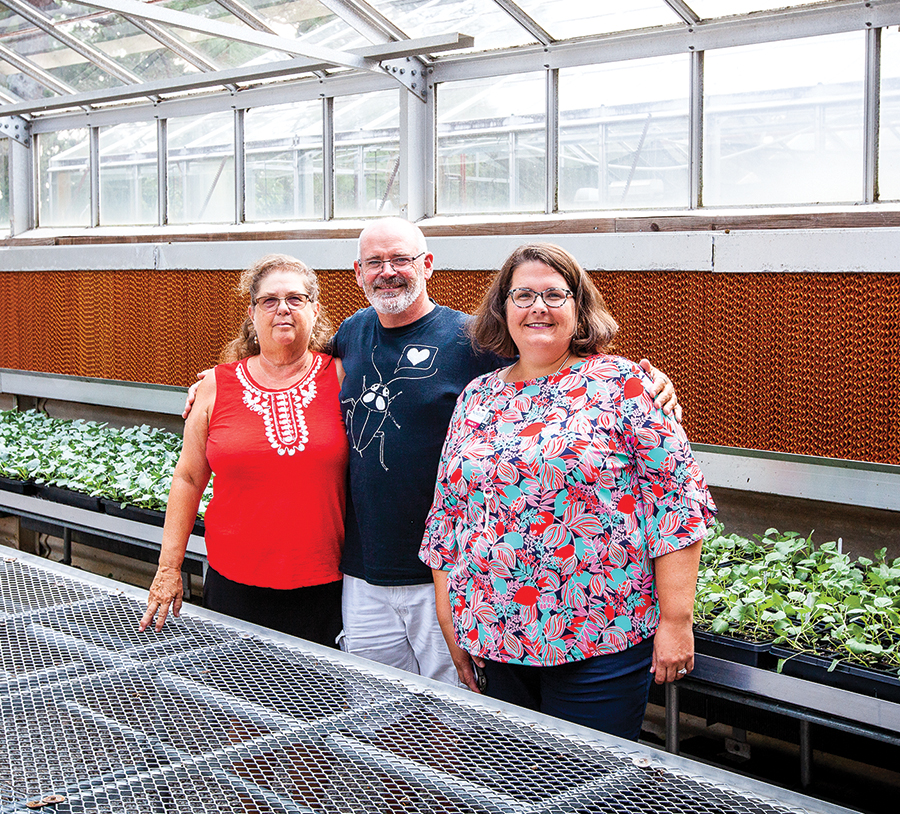 Jim Westmen grew up in Fayetteville, North Carolina, mowing lawns for chump change and helping his dad install and tend to a backyard greenhouse where wandering Jew and spider plants spilled from hanging baskets, and flower and vegetable seeds were germinated for the home garden.

By 17, he knew what he loved (horticulture), but Sandhills wasn’t on his radar.

“I was looking at N.C. State,” says Westmen, when a friend who had gone through SCC’s Landscape Gardening program told him about a community college in Pinehurst that he might want to check out.

A trip to campus included a two-hour talk with the program’s then-coordinator, Fred Garrett, and the rest is part of SCC history.

“It was the hands-on learning that most excited me about this program,” said Westmen. “I wanted to do it, not just talk about it.”

The small class sizes were also appealing. Although numbers are lower now than in years past (less than 20 are currently enrolled; the program can accept up to 35 students), Westmen is hopeful for the next green movement.

“Today’s society . . . when people walk by a beautiful landscape, maybe they can appreciate beauty, but many think it just happened. But somebody designed it, somebody grew it, somebody installed it.”

Prior to 1978, SCC’s Landscape Gardening students had to travel to the Boyd estate (Southern Pines) and local nurseries for in-the-field experience, but during Westmen’s freshman year, with the establishment of the Ebersole Holly Garden, the program as we know it really started to take shape.

Flash forward 40 years and see the history of the Sandhills Horticultural Gardens meticulously displayed on the walls of the G. Victor and Margaret Ball Garden Visitors Center.  Open to the public year-round, this 32-acre classroom includes 14 themed gardens planned, designed, constructed and maintained by the college’s Landscape Gardening staff and students. This kind of application is what Fred Huette must have envisioned when he proposed a horticulture curriculum like that of the renowned European garden training schools. And this is what makes SCC’s program a national institute.

Just outside the visitor center, beyond the dwarf spruces and Chantilly lace hydrangea, a young woman is photographing a stunning display of Fantasia Hibiscus, whose cheerful pink faces resemble a scene from the Lollipop Guild. A short walk toward the main campus brings us to Steed Hall, where Westmen spent the balmy morning indoors teaching his Arboriculture Lab students how to safely operate a chainsaw.

“First they learn how to turn it off,” he says, smiling yet completely serious. Same goes for mowers, blowers, tractors, weed-eaters, skid-steers, utility carts, and all other equipment the students might use to help manage the campus grounds during their Work-Based Learning residencies. Westmen gestures back toward Steed Hall from the Conifer Garden, a miniature evergreen forest made enchanted with its dwarf varieties and collection of rare weeping spruces. Named for the late Warren Steed, longtime benefactor of SCC’s Landscape Gardening program known for his excessively gracious nature and accidental discovery of the Little Gem magnolia — “You couldn’t leave his nursery without him gifting you a plant,” says Westmen — the building houses modern offices, classrooms and a small dormitory where students take turns living on-campus and applying their knowledge to the program’s greenhouses and the SCC gardens for two-week shifts.

“This puts them in the position of being responsible and practicing time management while they’re taking classes,” says Westmen. And it helps build their confidence.

Dee Johnson, who succeeded founding program coordinator Fred Garrett and served as such for the past 17 years, says that the students of SCC are among the most sought-after in the landscape gardening industry.

“I got calls every week from all over the country,” says Johnson, who, like Westmen, is a graduate of the two-year program. “We’re not typical of a community college system. Here, you’re learning how to drive a skid-steer and install irrigation. Most four-year degree programs don’t offer that kind of experience.”

When asked to share some of the highlights of the program’s history, Johnson is quick to mention Dr. Ebersole’s collection of hollies, which the students dug up from his property on Midland Road and transplanted. She’s not so quick to mention that, 40 years ago, like Westmen, she was one of those students.

“Do I have to show my age?” asks Johnson, whose subtle humor underlies her no-nonsense nature.

“We had 383 species of holly,” she continues. “That was the beginning of the gardens.”

At the program’s 50th anniversary celebration in June, Johnson was presented with a bronze “Dog Ate My Homework” statue in honor of her recent retirement.

“I’m a stickler about getting things done on time,” says Johnson. “My colleagues thought the statue was very appropriate.”

Given the close-knit atmosphere of the program and its symbiotic relationship with the gardens, it’s no surprise that past graduates feel drawn to return as faculty.

The same is true for instructor Johanna Westmen, who, yes, happens to be Jim Westmen’s wife.

While the mind is quick to imagine young Jim and Johanna sharing their first kiss beneath the lush canopy of what’s now the fringe of the romantic Atkins Hillside Garden, theirs is a fairytale of a different variety.

The Westmens didn’t meet here as students. They were already married and had started a local landscape business and nursery when Johanna decided to go through the program.

“It was interesting,” says Johanna of being her husband’s student. “But I could not have asked for a better teacher.”

She graduated from the program, and when a teaching position opened up, Johanna joined the faculty.

“That’s one reason it’s such a joy to be here,” says professor Westmen of working with his wife. “We’re best friends.”

But ask either Westmen to tell you what they love most about the program and they will both say the same thing.

“Absolutely, hands down, it’s the students,” says Johanna. “Getting to be part of the lives of so many diverse and interesting people in the years I have been here is what keeps me going every day. The relationships you form with these students is everything.” 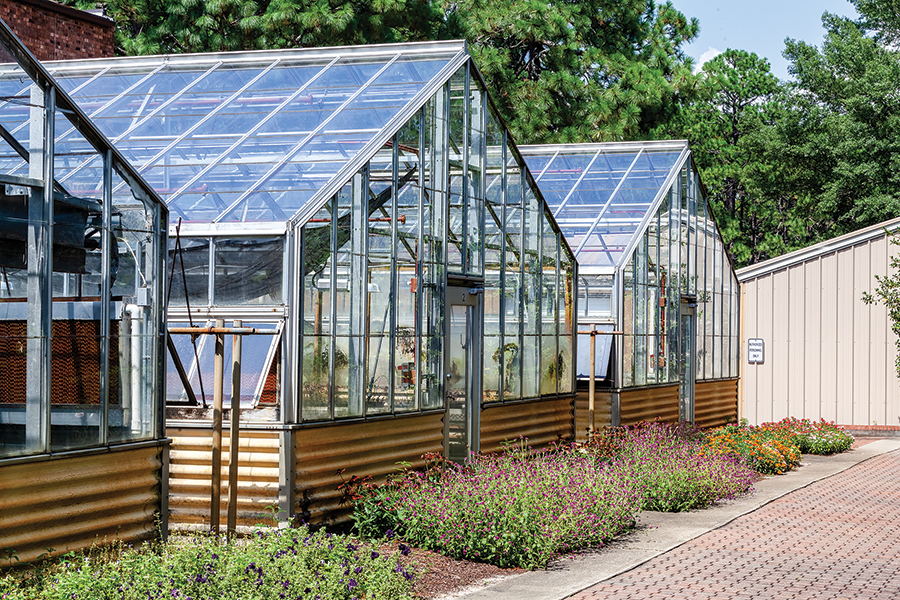 Westmen’s keys jingle against his hip as he makes his way toward the Sir Walter Raleigh Garden, a formal English-style garden where Bengal tiger cannas look like brilliant flames against a muted yet stunning backdrop of white-flowering crape myrtles trained into the form of single-trunk trees towering at 15 feet.

“They must have been about 6 feet tall when I started teaching here,” says Westmen, who paints the scene of students pruning them each February with four words: “Little birds in nests.”

Beyond the Atkins Hillside Garden, where swallowtails light on flowering butterfly bushes and tiny frogs squeak from lily pads to water as visitors cross bridges over the winding rock-lined stream, Westmen guides his guest to one of his favorite places on campus: the Ambrose Japanese Garden. Here, his passion and appreciation for creating a sense of place comes alive.

“Japanese gardens have a particular look,” says Westmen. “You can’t just take those components, plop them on the ground, and call it a Japanese garden. It has to evolve from the location.”

Designed by one of the program’s former students, the garden feels completely natural in longleaf pine turf.

Westmen points out the textures, the low-intensity colors, the various shades of green, the material used for the hardscape and meandering path, the wabi-sabi aesthetic of the moss-covered rocks, and the naturalistic features such as the arched bridge and azumaya.

“It’s more about the feeling you get as you move through this garden,” says Westmen, who pauses to admire the wavy pattern raked into the dry (Zen) garden. From the looks of it, the students in living quarters must have just completed it.

Westmen has a naturally laid-back vibe, but he is noticeably more tranquil here. He studies the pattern in the crushed stone with the knowledge that he has never seen anything like it.

“The time it takes to rake a pattern like this in here is kind of what I want them to get out of it,” he says. “It’s somewhat of a meditation.”

He then describes the effect this assignment continues to have on some of the “big-belt-buckle-kinda-boys” he sees come through the program.

“They get so excited about doing this. That excitement was the whole point . . . to see that change in them.” 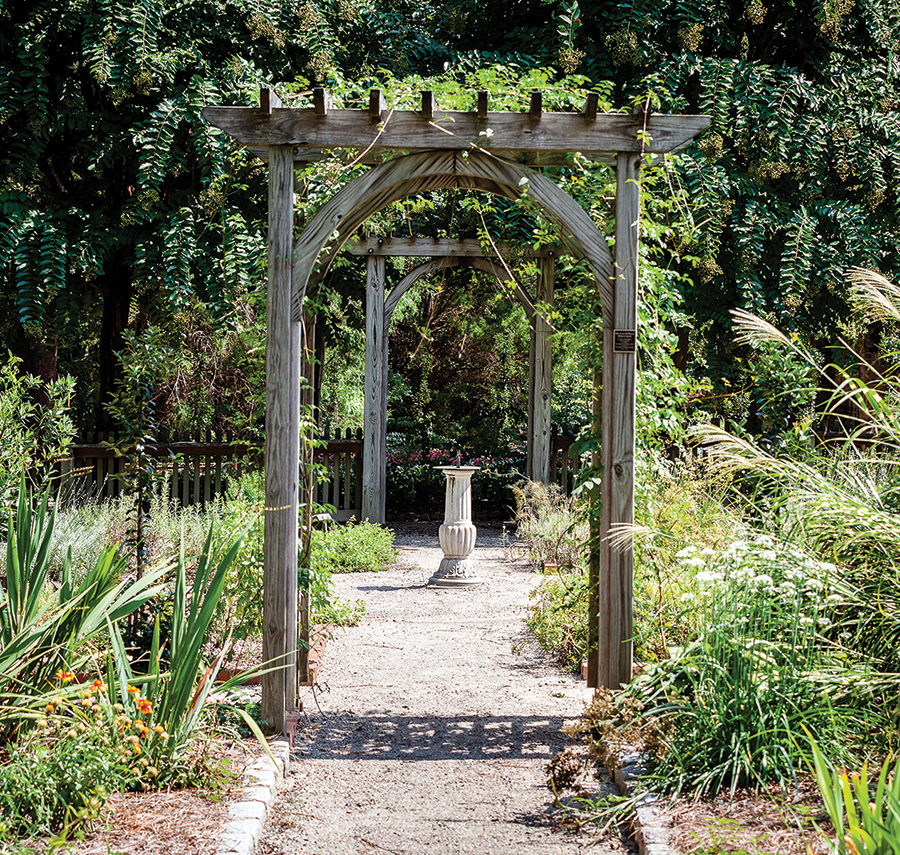 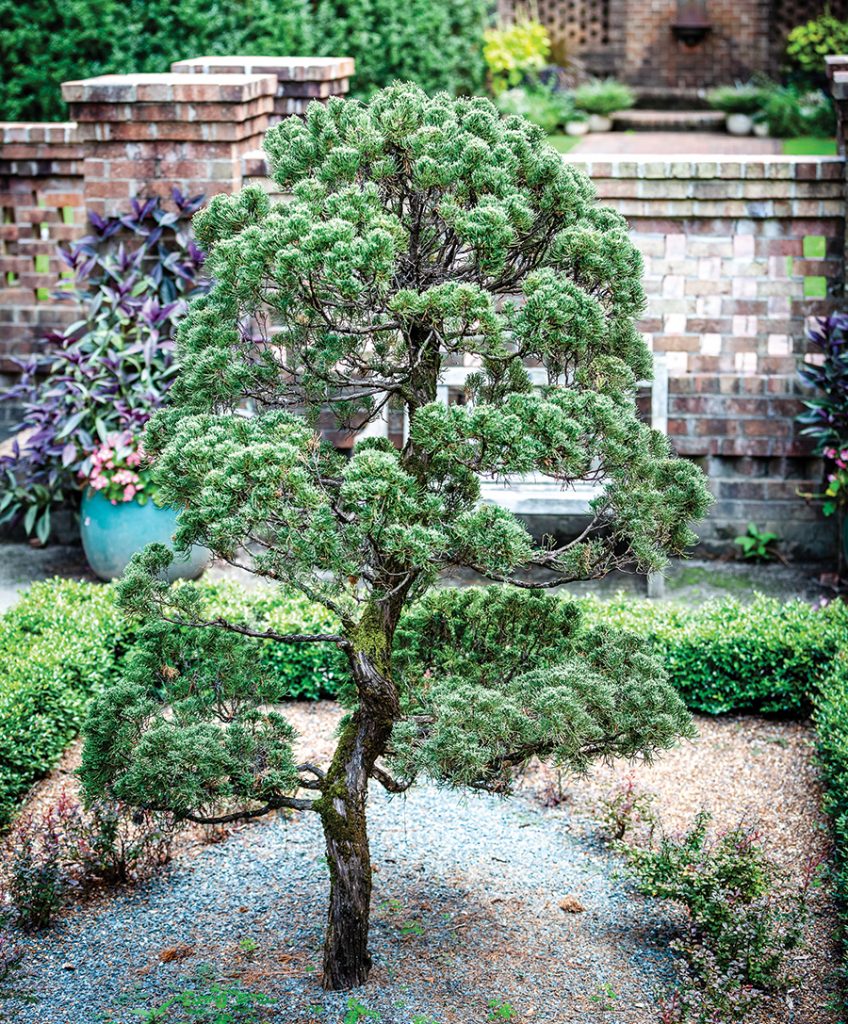 After walking through the Fruit and Vegetable Garden, where a gray squirrel snags an under-ripe apple and a red-headed woodpecker raps on a nearby longleaf pine, Westmen heads for the Hoad Children’s Garden behind the Visitors Center, the newest addition to the gardens.

“Our current students worked their butts off to have the drip irrigation ready for the program’s 50th  anniversary celebration,” says Westmen. “They’re an incredible bunch.”

On June 9, upward of 300 guests attended the party. Among them were over 100 alumni, many of whom were amazed by the evolution of the gardens, and how the work and care they put into it so many years ago still lives and breathes with the landscape.

“There’s this dedication, this love for what the program created for us,” says Westmen. “We want to see that continue, hopefully for another 50 years at least.”

The professor playfully sniffles as if getting sentimental, but behind the joke is undeniable sincerity.

“I’m proud of the program and I’m proud of what the students have produced,” he says, eyes sparkling as he takes in the handiwork of his current students. “In a way, the program has offered me a career and a life.”  PS

Ashley Wahl is the former senior editor of Salt Magazine. She currently writes, sings, and plays among the trees in Asheville, North Carolina.