Return of the Birds

It is such a small space to hold the passion of a lifetime.

In a corner on Level B of the North Carolina Museum of Art, John James Audubon’s four bound volumes of The Birds of America are back on exhibit, joined by instructive videos and an immersive wilderness experience. There are roughly 200 extant copies of the so-called double-elephant folio version, comprised of 435 hand-colored, life-size prints. North Carolina’s copy — minus two pages that were added later — was acquired in 1846 from Joseph Green Cogswell, a book dealer in New York, as part of a larger purchase by North Carolina’s then-governor, William Alexander Graham, who was intent on expanding the state’s library. It was transferred from the N.C. State Library to the museum in 1974. The last time the four volumes, each enclosed in its own specially constructed case, were on exhibit was July of 2016.

The engravings will be shown one page per volume — so, naturally, four at a time — for three months before changing them in the open-ended exhibit. The four on exhibit now include a wild turkey looking back as it crosses a Louisiana canebrake — the first plate produced in the project that consumed near the entirety of Audubon’s life. “The hand-coloring is light sensitive so we don’t want to expose it too long,” says John W. Coffey, the museum’s deputy director for Collections and Research. “People approach any art exhibit with different expectations. You have people that just stumble into the exhibition and, hopefully, they’re engaged by the story of Audubon. And then there are people who are bird lovers. There are lots of those who venerate Audubon as a naturalist. There are people who just like fine art. What Audubon created were not just accurate renditions of the birds of America but also quite beautiful compositions. They held their own as works of art in their own right.” 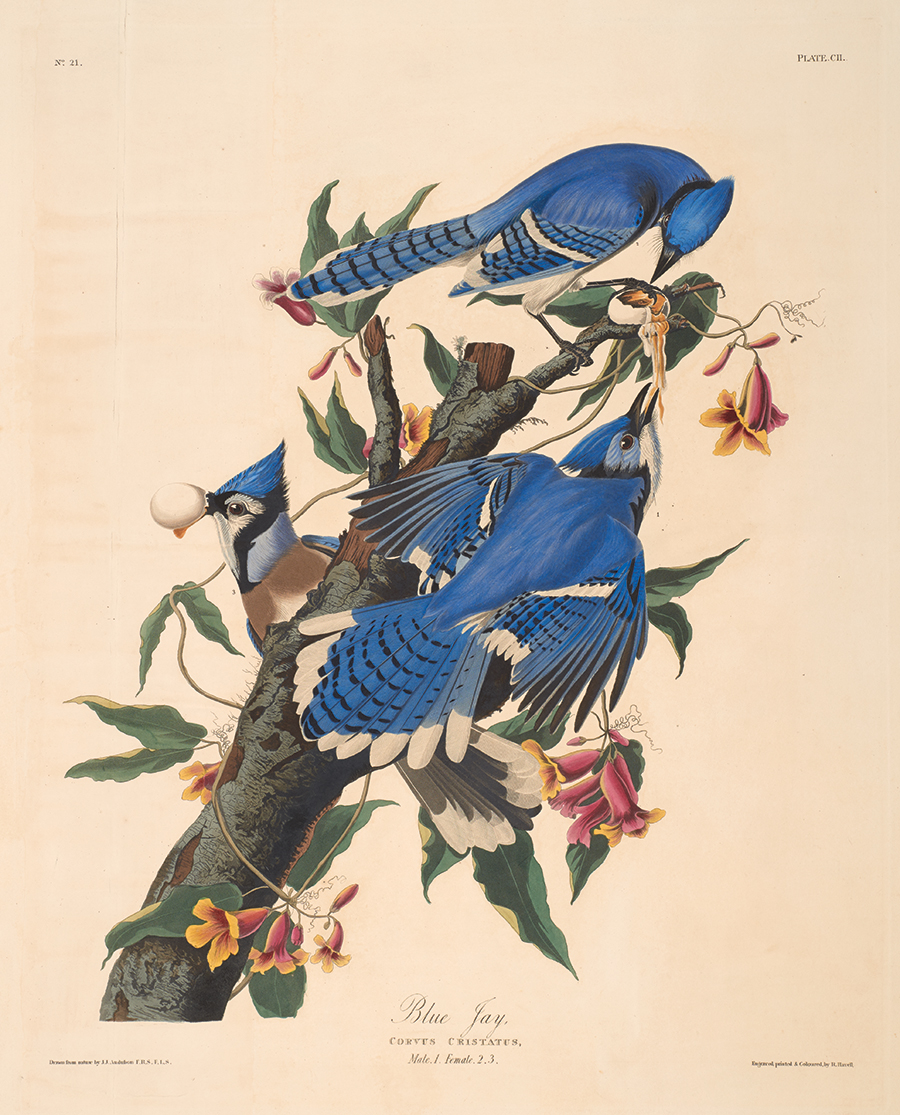 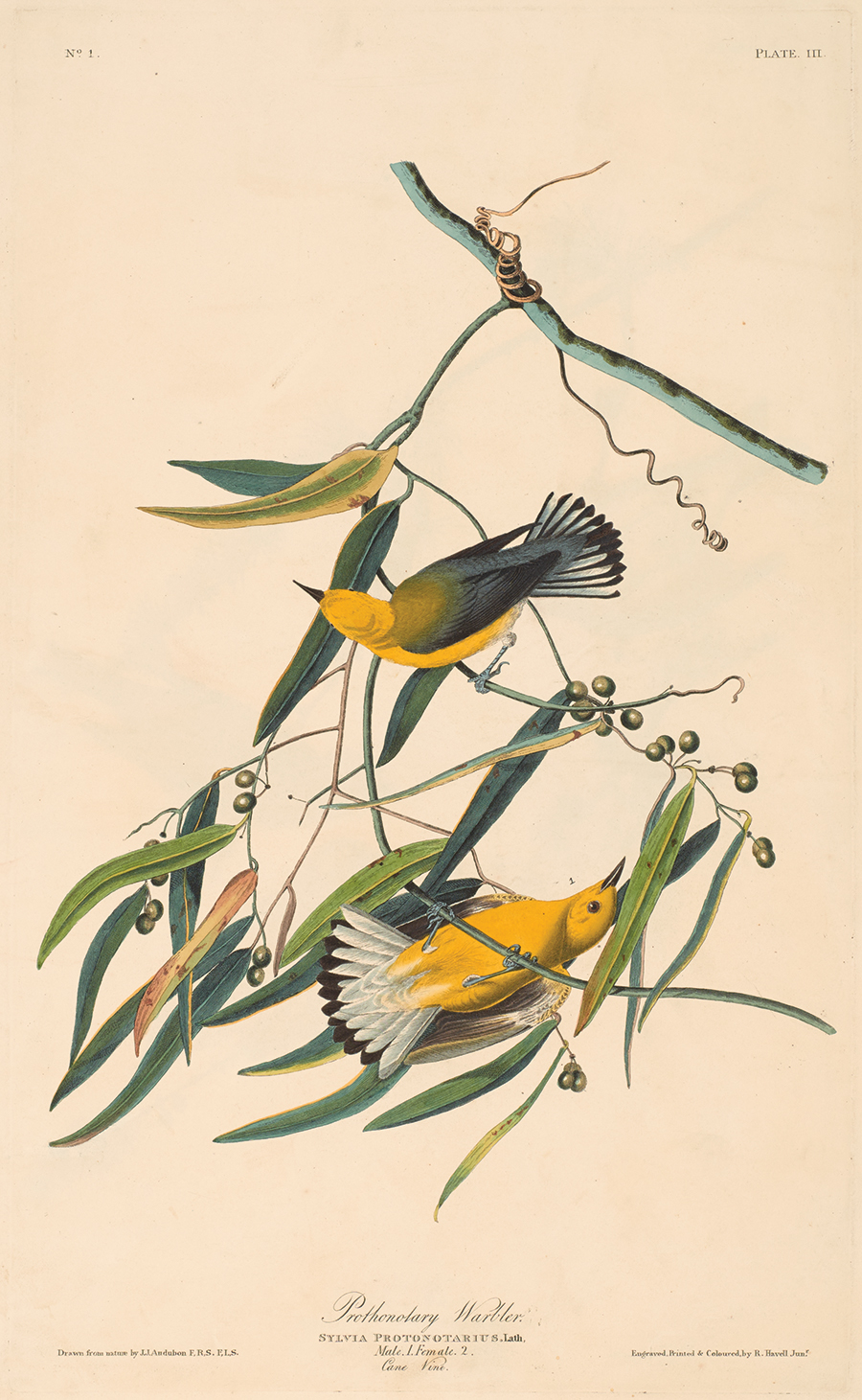 John James Audubon was born Jean Rabin, the “backstairs” child of the sea captain Jean Audubon and a French chambermaid, Jeanne Rabin, on Audubon’s sugar plantation in Les Cayes, Saint-Domingue. The child’s mother passed away from an infection mere months after the boy’s birth. The sea captain had his son and the boy’s half-sister (the daughter of a second mistress) transported to his home in Nantes, France, in advance of the revolution that engulfed Saint-Domingue, eventually establishing the Republic of Haiti. His lineage a closely held secret to preserve his inheritance, the boy grew up in Nantes as Jacques Fougère Audubon during the Vendéan counterrevolution and the terror that accompanied it.

“Losing his mother in infancy, separated from whoever mothered him afterward on Saint-Domingue when he was shipped off to France at six, just months ahead of a bloody revolution, enduring dreadful days as a young boy in Nantes when Carrier [Jean-Baptiste Carrier] was emptying the prisons with slaughter and his family feared for its life, was a full burden of trauma for a child,” writes Pulitzer Prize-winning Audubon biographer Richard Rhodes. “In maturity Audubon would expunge the stigma and the trauma from his family story by relocating his birth to Louisiana and to ‘a lady of Spanish extraction . . . as beautiful as she was wealthy’ when he knew full well that he was the bastard son of the chambermaid Jeanne Rabin.” And, if in the fullness of time, he found his résumé in need of further padding, Audubon would sometimes claim to have studied under Jacques-Louis David, Napoleon Bonaparte’s favorite neoclassicist painter. 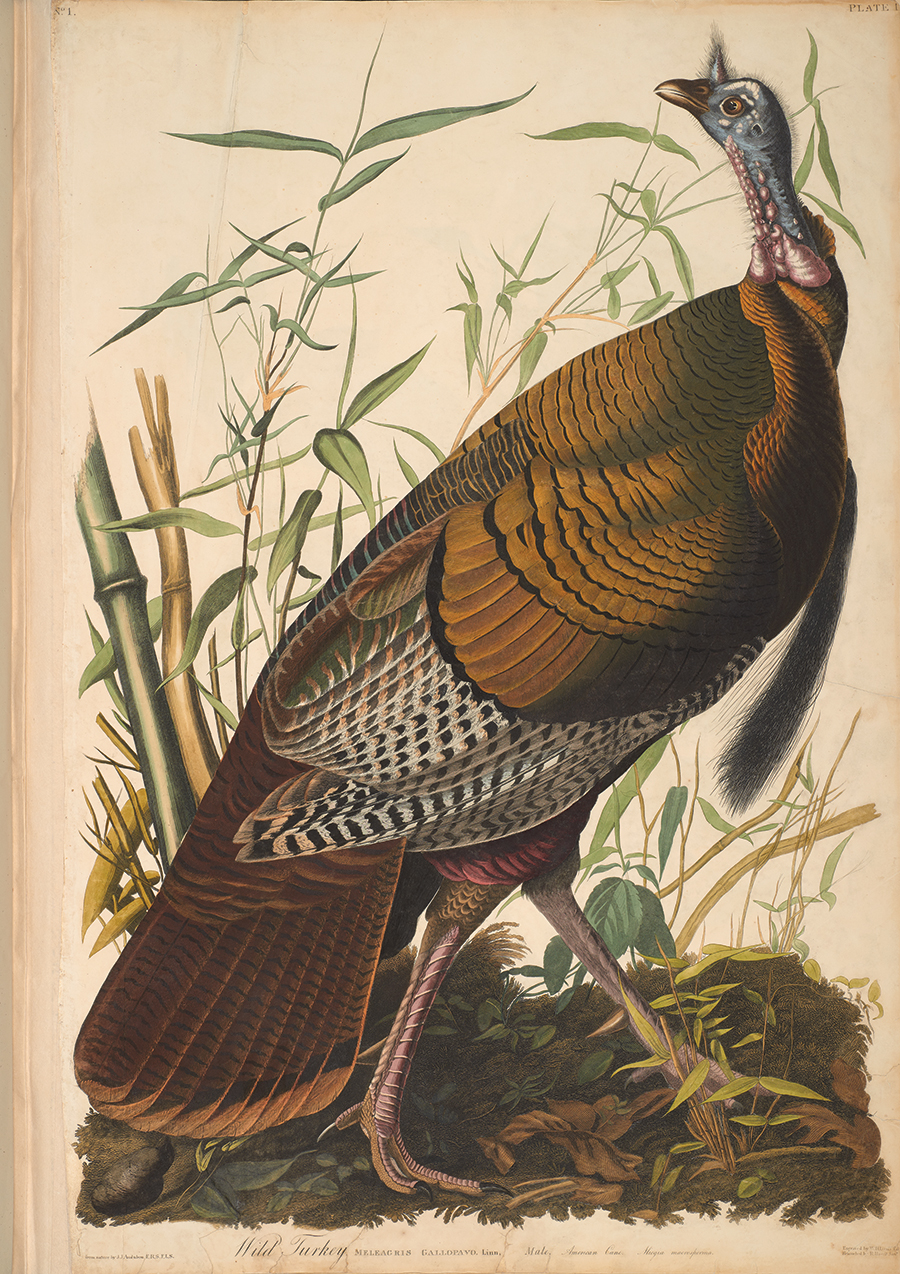 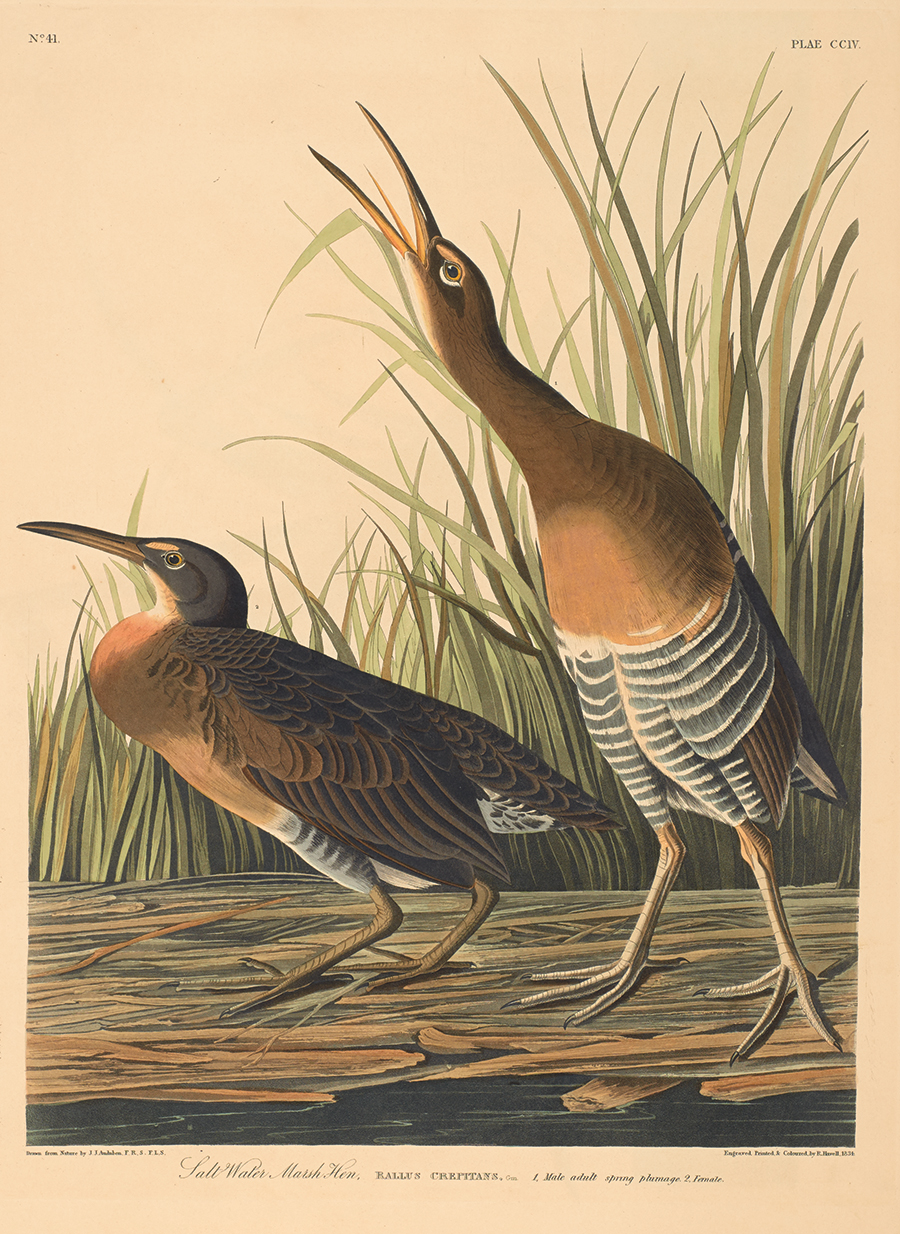 Sent to America by his father to avoid conscription into Napoleon’s army, Jacques Fougère Audubon became John James Audubon on his transatlantic journey, settling on his father’s Pennsylvania farm, Mill Grove. “He had begun drawing birds in France,” writes Rhodes. “Now, ‘prompted by an innate desire to acquire a thorough knowledge of the birds of this happy country, I formed the resolution, immediately on my landing, to spend, if not all my time in that study, at least all that portion generally called leisure, and to draw each individual of its natural size and coloring.’ This is retrospect, of course, but it catches the eighteen-year-old’s excitement and bravado.”

Audubon cut a dashing figure. The wife of a physician friend would describe the 30-something ornithologist and painter this way: “Audubon was one of the handsomest men I ever saw. In person he was tall and slender, his blue eyes were an eagle’s in brightness, his teeth were white and even, his hair a beautiful chestnut brown, very glossy and curly. His bearing was courteous and refined, simple and unassuming. Added to these personal advantages he was a natural sportsman and natural artist.”

While at Mill Grove, Audubon met his wife, Lucy Bakewell. He would begin a career as a merchant, floating down the Ohio River to Louisville and Henderson, Kentucky, and eventual bankruptcy. It was in Louisville that Audubon met Alexander Wilson, who was selling subscriptions (the method of the day to finance costly reproductions) to his own book, American Ornithology, but Audubon’s work was already vastly superior to Wilson’s.

Like any artist, Audubon’s style matured. One of the earliest innovations was the creation of his “board,” allowing him to pose the birds he killed — alas, it wasn’t as though he could hire them as models; besides, some made excellent eating — in the positions he observed in life. By May of 1812, he was drawing birds in flight. “Unlike birds posed on branches or standing on the ground, birds in flight required foreshortening to create the illusion of depth across the span of their wings or down the length of their bodies,” writes Rhodes. “Since Audubon’s limited formal art training had not progressed to foreshortening, he had to learn that complicated technique on his own by trial and error.” 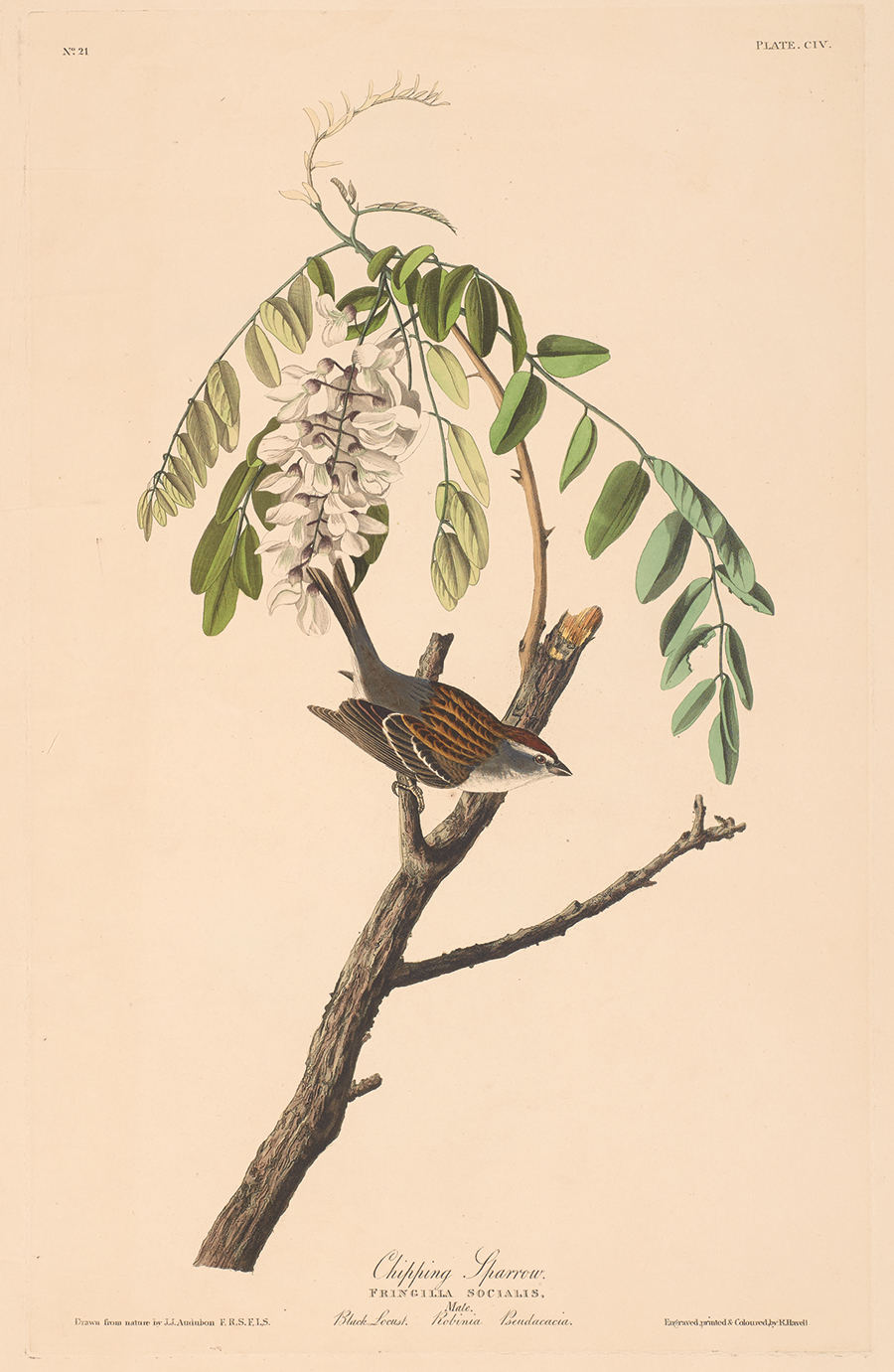 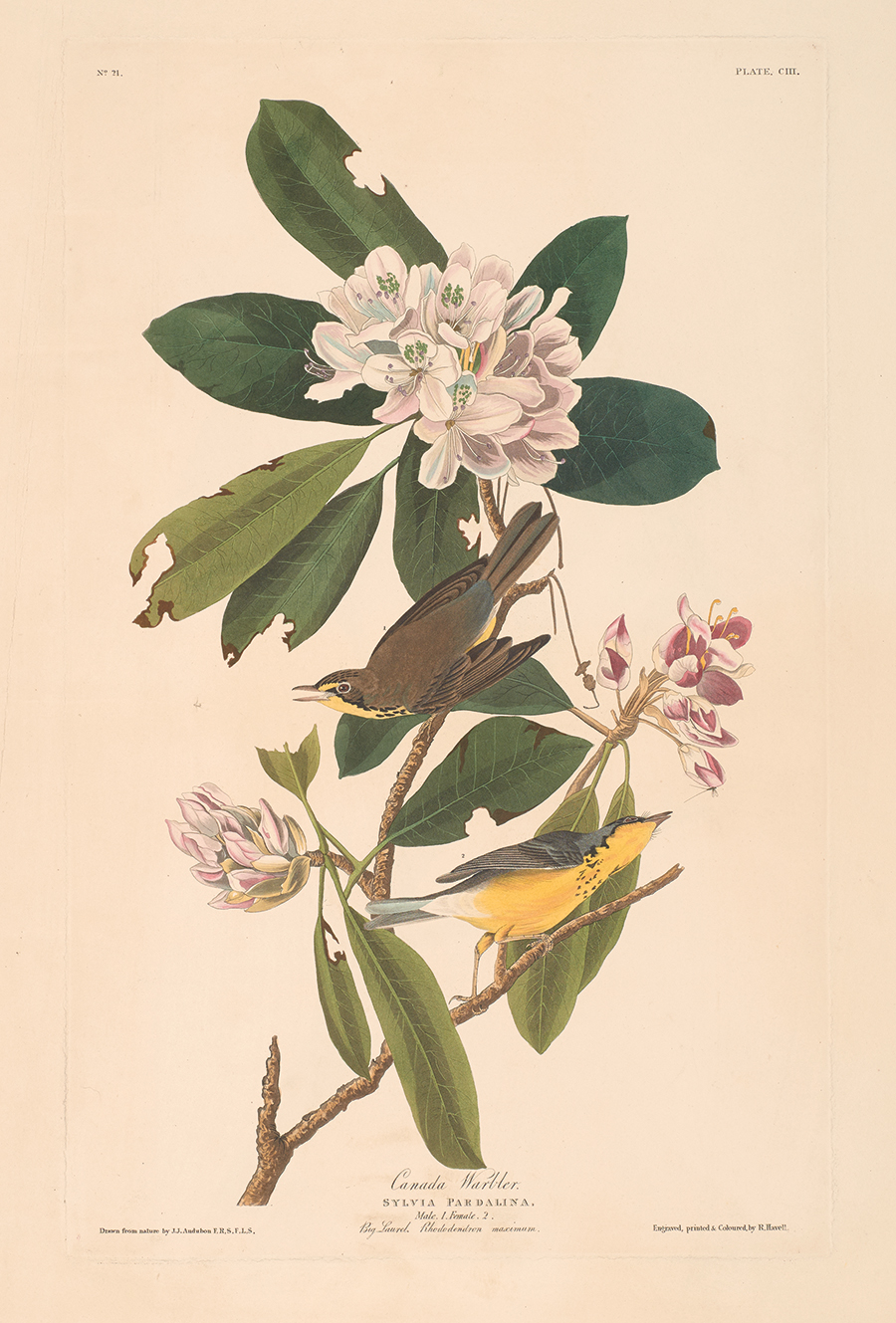 Another breakthrough came when he added color chalk. “I resorted to a piece that matched the tint intended for the part, applied the pigment, rubbed the place with a cork stump and at once produced the desired effect!” he wrote. Then, in 1821 and ’22, he revamped his style again. “He already knew the traditional French medium of pastel very well; he had been perfecting it since he was a young man. Now he added to his repertoire a crystal-clear watercolor technique, the ability to use gouache effectively, and an extraordinary varied use of the pencil, together with the talent for combining all of these graphic means to render a single bird,” writes art critic Theodore E. Stebbins, Jr. “No one in America equaled him for graphic inventiveness until Winslow Homer some sixty years later; as for European parallels, one can only think of the great English watercolorists, both contemporaries of Audubon: J.M.W. Turner and Samuel Palmer.” The original watercolors for The Birds of America are in the collection of the New-York Historical Society and rarely seen because of their sensitivity to light.

Having run financially aground in the Panic of 1819, Audubon journeyed to New Orleans to collect a debt from Samuel Bowen that involved the ownership of a steamboat. Things didn’t go well. Bowen had already given the boat over to settle debts of his own. One thing led to another and Bowen attacked Audubon. As it turned out, he brought a cudgel to a knife fight, and Audubon stabbed him with his dagger. Later, appearing in front of Judge Henry P. Broadnax, Audubon defended himself before the court and was acquitted by reason of self-defense. “Mr. Audubon,” the judge added, “you committed a serious offense — an exceedingly serious offense, sir — in failing to kill the damned rascal.”

Having lost everything in Henderson, Audubon turned to portrait painting to make a living. Then, envisioning himself as “a one-man ornithological expeditionary force,” as Rhodes put it, he went back down the Mississippi, returning to New Orleans in 1821 with his assistant, Joseph Mason (one of several assistants who painted the backgrounds in Audubon’s works). His commercial portraits included the nude of a woman, Mrs. André, a mysterious client requiring his absolute discretion and to whom he referred as “The Fair Incognito” in his diaries. Eventually, he was joined in New Orleans by his wife, Lucy, living at what is now 505 Dauphine Street. Audubon was producing his ornithological paintings at a dizzying pace. After New Orleans it was up to Natchez, Mississippi, then Louisville and Philadelphia and Pittsburgh and on and on. His sources of income weren’t confined to portraits. He taught dancing, drawing, even fencing. 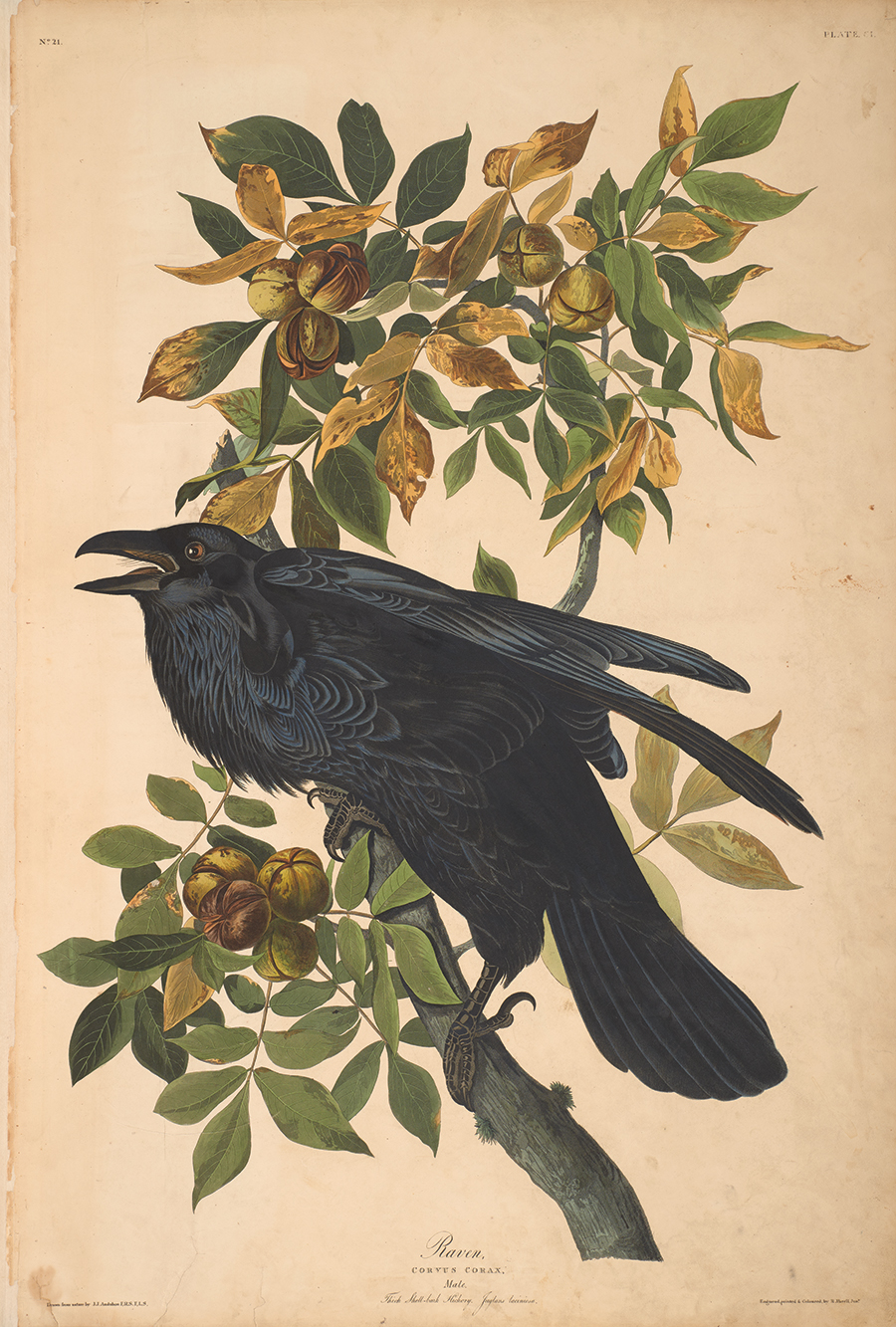 Knowing that obtaining engravings of the number and quality necessary to produce The Birds of America could only be done in Europe, Audubon sailed from New Orleans on the Delos on May 18th, 1826. The ship was carrying 924 bales of cotton and a seasick John James Audubon with more than 300 drawings in tin-lined wooden portfolios.

An American backwoodsman with crates full of art proved a topic of considerable novelty in an Old World keen for knowledge of the new one. Audubon was well received. The first engraver to take on his project was William Lizars in Edinburgh. Lizars did approximately 10 engravings before a strike by his colorists forced Audubon to turn to Robert Havell Sr. and his son in London.

“Robert Havell Jr. was a more painstaking engraver than William Lizars and his father supervised the London colorers perhaps more carefully but there was a qualitative difference between the technologies Lizars and the Havells used to make Audubon’s colored plates,” writes Rhodes. “The Havells used a process known as aquatint, which allowed them to print shadows and shadings in a range from light gray to black, leaving the colorists only the more limited task of applying a uniform wash of color over the aquatinted area: the shading made the color appear darker.” Havell retouched the early Lizars plates, something that’s noted in the lower right-hand corner of the wild turkey engraving currently on view. While even the Havells had their ups and downs satisfying Audubon’s very specific instructions and expectations, it proved a match made in artistic heaven.

The last plate of The Birds of America was completed in June of 1838. Audubon was 53. His estimate of the project’s cost, monies he raised himself, was “$115,640 — in today’s dollars, about $2,141,000,” reckons Rhodes. He began work on the octavo edition (a smaller and, hence, more profitable version) two years later. Audubon would suffer a stroke in 1848, and begin slipping into dementia. “His vivid personality faded into vacancy,” says Rhodes. He passed away in January of 1851.

“What’s beautiful about Audubon is that these birds are so dynamic and alive, it feels like they’re almost jumping out of the page,” says Silvia Fantoni, the director of Audience Engagement and Public Programs who put together the immersive exhibit comprised of 19 of Audubon’s birds in varied habitats over a 24 hour period. “That’s what we wanted to do. I find his work fascinating, how driven he was by this project. It’s always interesting to see when an artist has this kind of obsession and vision and dedicated his life to do that. That’s why we still celebrate him almost 200 years later.”  PS