Weymouth Woods is home to the oldest longleaf pine in America — heck, maybe the entire world. Oh, the history that big ol’ pine tree has witnessed.

So, what do you get someone who just turned 469? It’s not as simple as when Robert Wuhl walks to the mound in Bull Durham and advises his players that “well, uh . . . candlesticks always make a nice gift.” At 469 it’s probably time to downsize, not accumulate more stuff. Besides, when the oldest longleaf pine started growing in the back 40 of Weymouth Woods, baseball hadn’t even been invented. OK, it may not be the oldest longleaf pine anywhere but it’s the oldest one that’s been measured and it’s right here and, well, 469 is still 469 no, matter how you, excuse the expression, cut it.

When this thing started growing Shakespeare wasn’t even a twinkle in Falstaff’s eye. It started sprouting 39 years before the Lost Colony got lost and has hung around long enough to have its own GPS coordinates. It was hail and hearty 170 years before Blackbeard got blown out of the water; 225 years before the ladies of Edenton threw their own revolutionary tea party; 317 years before Sherman marched through; 355 years before the Wright brothers got airborne on the Outer Banks; 366 years before Babe Ruth got his nickname in Fayetteville; and 447 years before the Carolina Panthers got beat in their very first game by the Atlanta Falcons, in overtime, of course. In lieu of gifts, we arranged a small, intimate gathering. These are just a few of the invited guests this ancient tree could have impacted over the centuries, if only it had the chance. 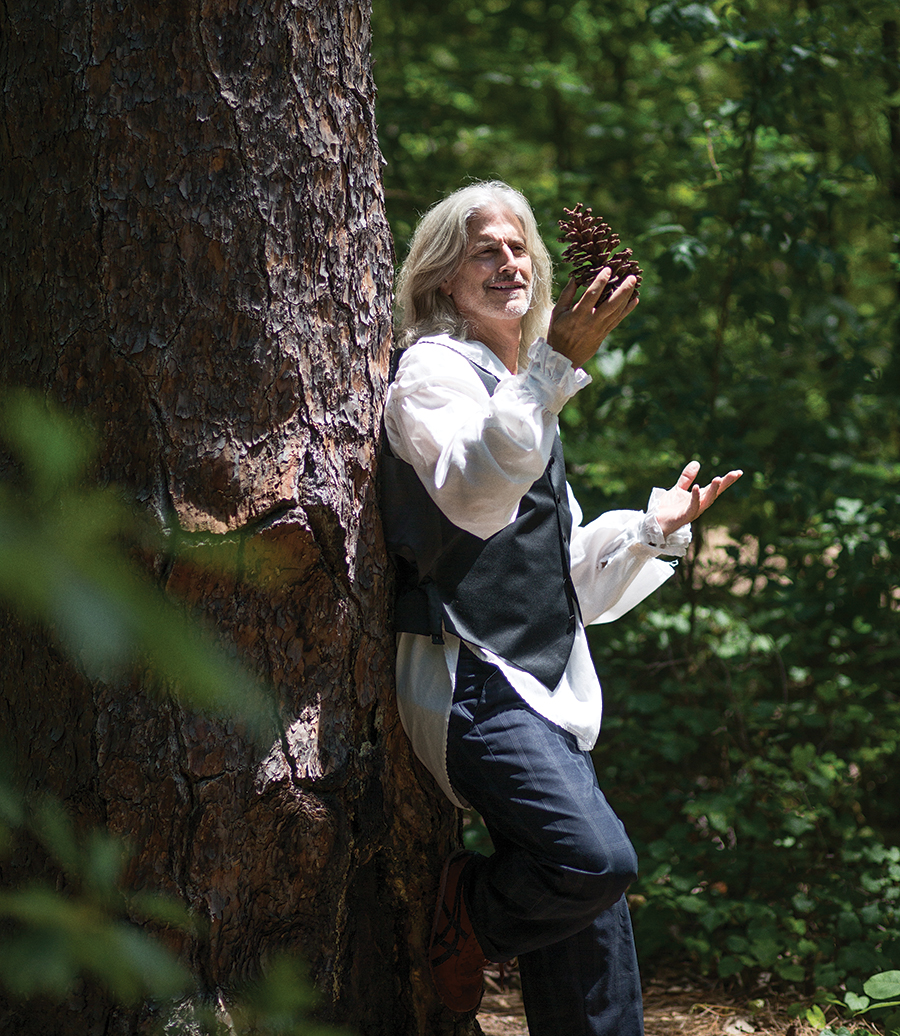 Who says Newton was inspired by an apple falling in his mother’s garden in their home in Lincolnshire, England? The mathematical genius never wrote about it, though accounts of him mentioning apples and trees and whatnot to a friend do exist. As the cantankerous old boy aged, it seems the apple anecdote was polished just a bit more with each successive telling. We, however, think it’s just as likely one of the most famous eureka moments in science could have been inspired by a falling pine cone. Eddie Meacham, who has been dealing in the laws of man for 33 years rather than the laws of physics, took a lunch break from Van Camp, Meacham & Newman PLLC to get hit on the head. 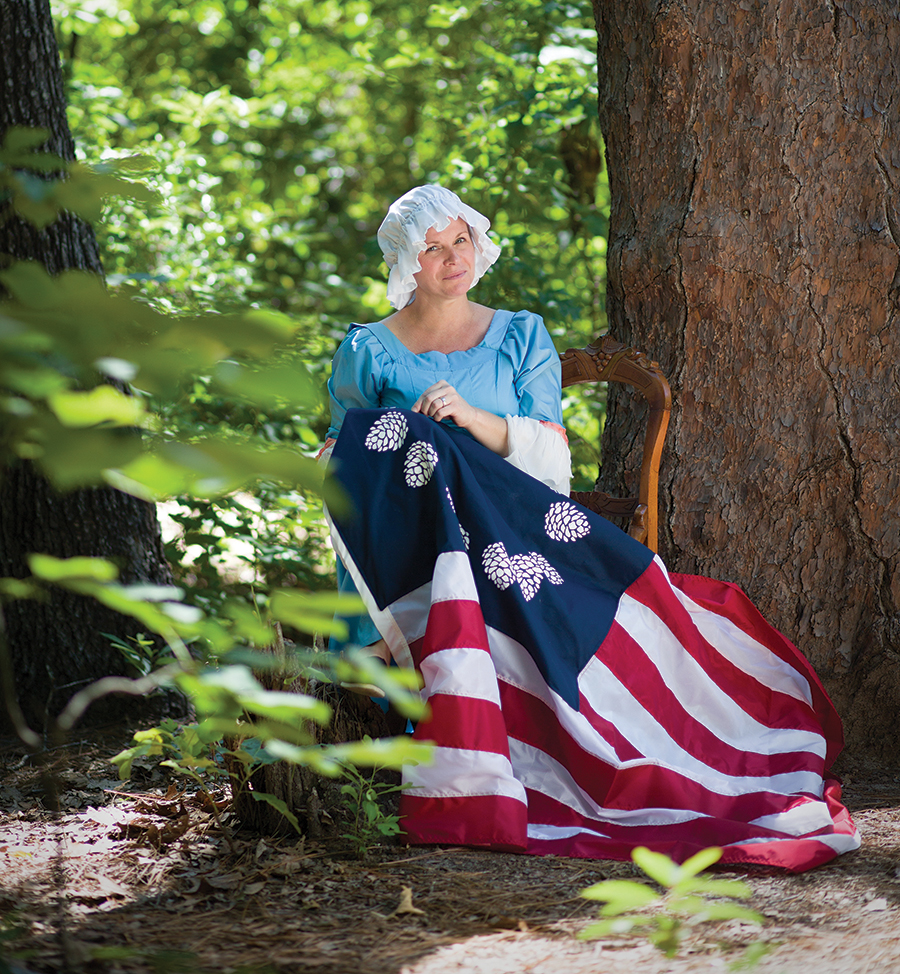 Legend has it the young, beautiful, widowed seamstress convinced General George Washington that the five-pointed star was easier to cut and stitch than the six-pointed one the powdered wig set had in mind. However, there’s nothing in the historical record to indicate that the pine cone had been definitively ruled out. Betsy was just one of several Philadelphia flag makers but, thanks to her grandson about 100 years after the Declaration of Independence, she grabbed all the old glory. Melissa Murphy, a local seamstress whose business, Banana Peels, makes hooded towels, burp rags, bibs, etc., provided a stitch in time for us. We’ll leave it to her grandson to embellish the tale in a century or so. 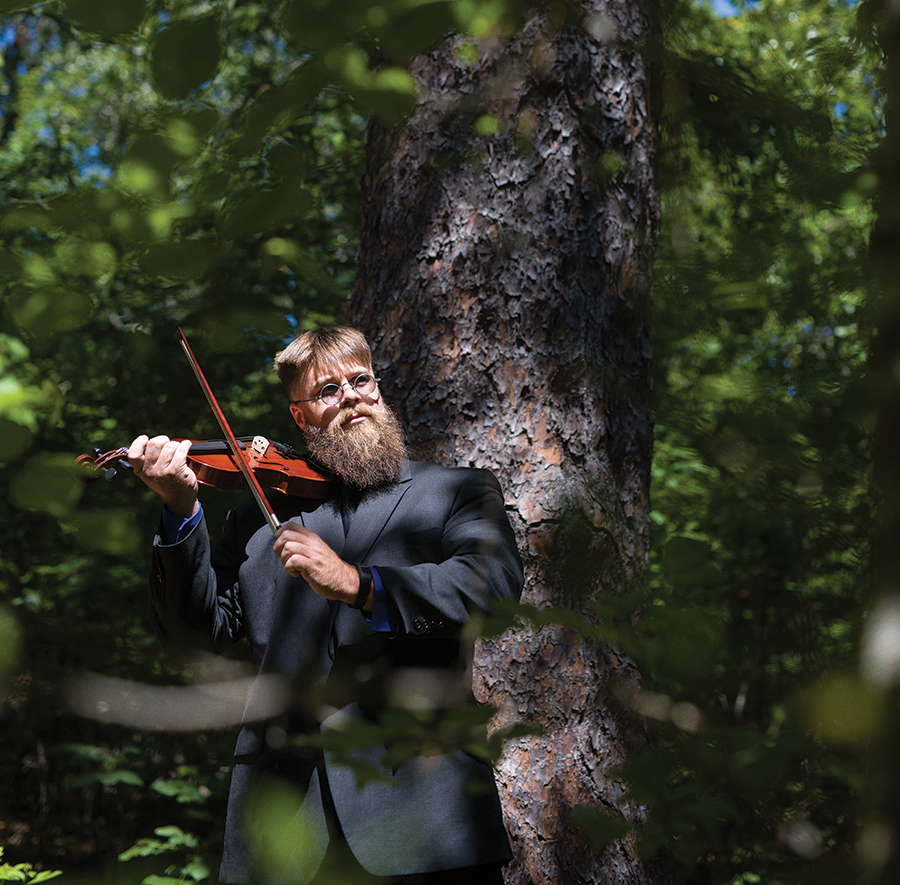 For those who haven’t had their fill of Russian fiddling just yet, Rimsky-Korsakov was a naval officer, a card-carrying member of The Mighty Handful (Russian composers known as The Five) and the creator of the “Flight of the Bumblebee,” which is the fastest minute in music on the 19th century side of Prince. Mac Wood, a Scotland County native who had a distinguished seven-and-a-half year military career of his own and is a massage therapist at Sandhills Therapeutic Effects, managed to keep his bow from setting his beard on fire when we slowed the pace just a little to the Flight of Pine Beetle. Or maybe it should be Pine Beatle. 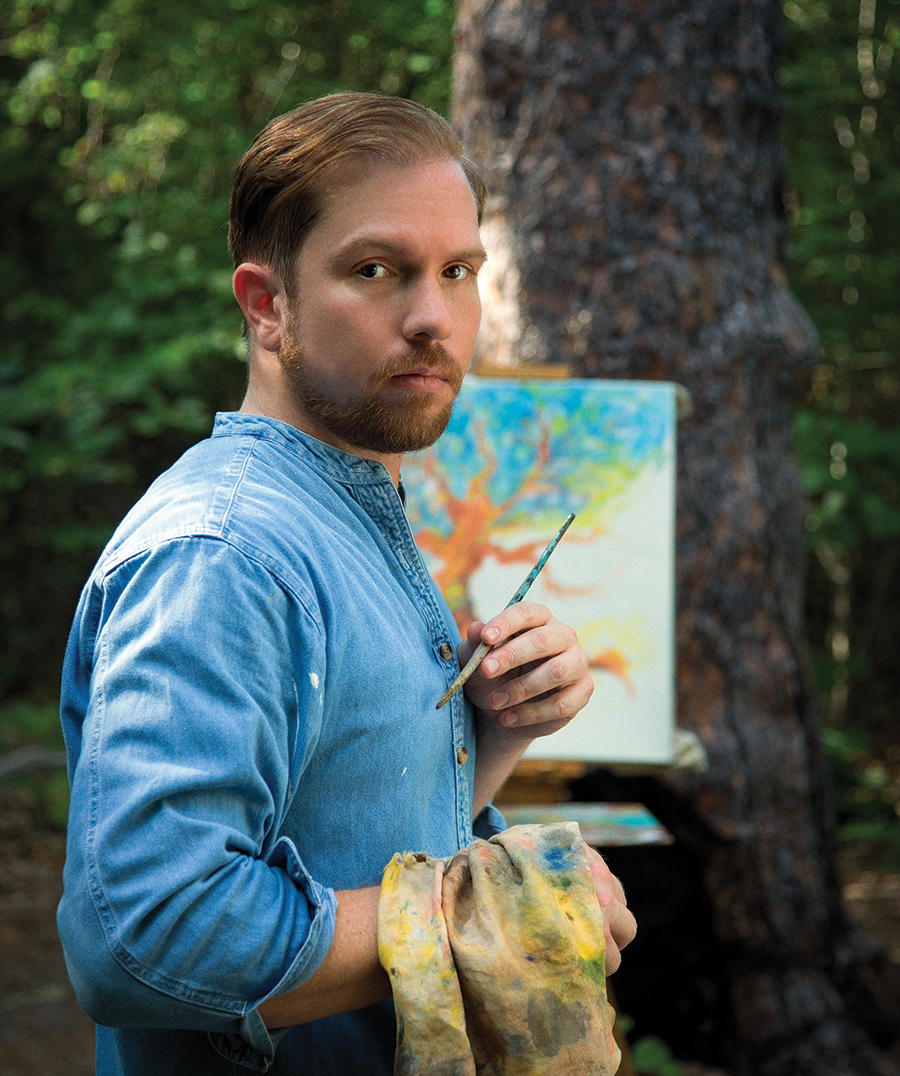 Oh, sure, he’s done wheat fields and crows and starry nights and sunflowers, but we’re pretty sure, hidden away in someone’s basement, are his masterful series of pine tree paintings, every bit as hauntingly aching and tortured as a bunch of irises. This bit of pulp fiction would be grist for the mill of the anguished artistic soul. Our photographer Tim Sayer has stepped into the role for us. We could tell you how he managed to both take the picture and be in the picture but, then, we’d have to cut your ear off. 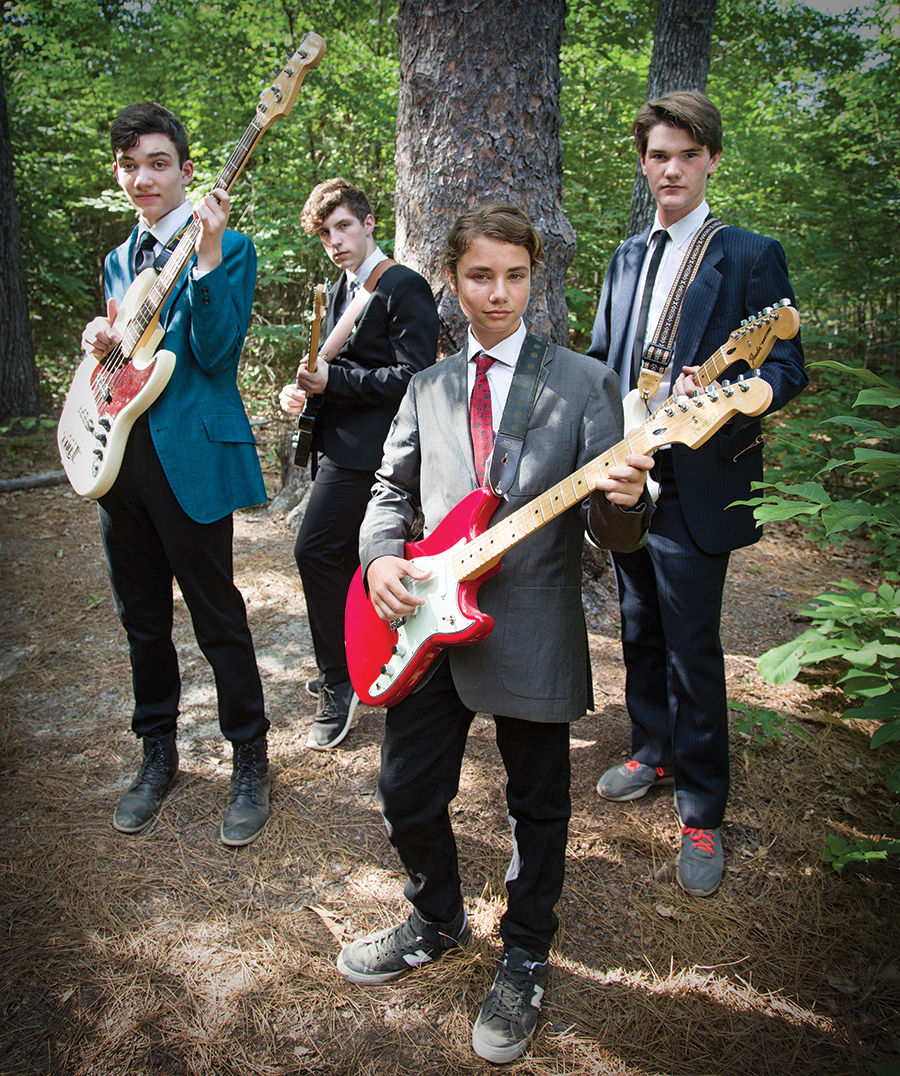 As a card-carrying senior member of a forest of longleaf pine that once covered 90 million acres from Sandhills to Coastal Plain, why wouldn’t there be a place for a little beach music and some shagging at a summer party? Michael Gibson, Adam Smith, Sam Schneiderman and Reed Taws stand in as The Embers to give us a controlled burn. 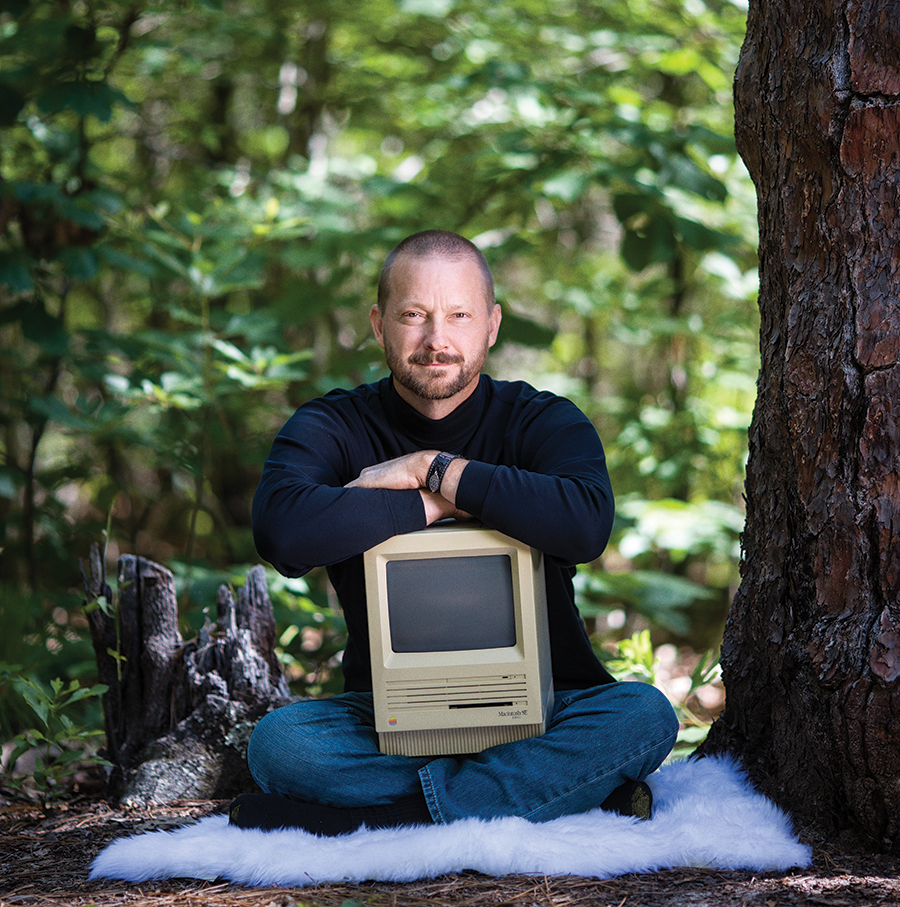 Because he was on an all-fruit diet? That’s why a company worth something in the neighborhood of $750 billion — started in a garage by three guys, one of whom was a notoriously difficult human being who wore black mock turtlenecks, Levi 501s and New Balance jogging shoes — is named for a fruit? Surely, Pine cone would have been an equally good option. Brady Beck, North Carolina’s Southern Piedmont management biologist and a nature photographer, shows why there is absolutely no reason we’re not all talking on our iCones today.  PS