An ode to azaleas

Quick! Word association game. What comes to mind when you see the word “azalea”? Garden parties? Festival queens with long white gloves and tiaras? Augusta National Golf Club? The Cretaceous-Paleogene extinction event? Possibly not, but more about that later.

Azalea shrubs, for the most part, are evergreen, reasonably fast growing, sturdy and undemanding. What’s not to love? They can be counted on to bloom reliably year after year, providing floral skirts and crinolines for the clouds of flowering cherries and dogwoods — a tableau that never fails to dazzle for a few short weeks every spring. Azaleas are a mascot any town can count on. By and large boasting a good life expectancy, they’re going to stay where you put them like lamp posts and park benches. The open azalea blossom, with its hallmark five stamens flaring out, suggests nothing so much as fertility, new life, the future about to unfold. Not a bad subliminal message for any place that wants to appear vibrant and forward looking. For many good reasons, over a dozen towns all across the United States — from Hamilton, New Jersey to Brookings, Oregon — have hit upon the idea of luring people with azalea-themed enticements, and it works. 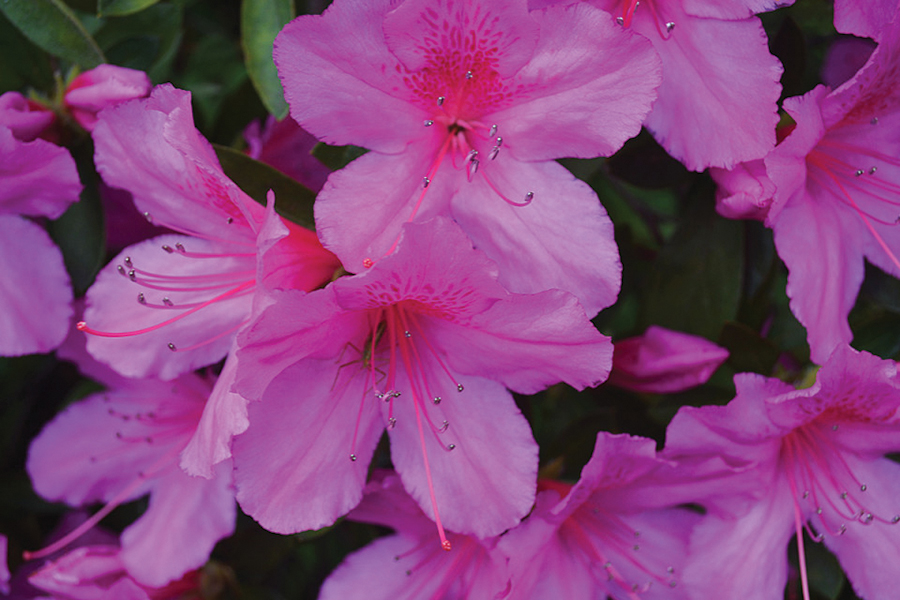 One of the advantages of living in the South is the broad spectrum of azaleas that are able to thrive. In the coastal regions, the size and lushness of the big, blousy indica hybrid generally makes an intense impact on garden visitors. If there’s one azalea that most people are familiar with, it would be the indica ‘Formosa’, an uber-dramatic magenta giant that tends to dominate wherever it’s planted. The other two classic indicas for the Southeast are the snowy white ‘Mrs. G.G. Gerbing’ and the unbeatable shell pink ‘George L. Taber’ with delicately variegated petals and a sprinkling of freckles hiding in the hollow of each blossom’s center. The indicas thrive in hot, humid summers, performing best in slightly acidic soil with moderate moisture. They will grow and bloom in full sun as well as full shade, a feat not many plants can claim — although the perfect spot would be dappled sunlight. In areas like the Sandhills, kurumes are a better bet. Some of the favorites tend to be ‘Coral Bells’ with their soft, pink color; the fiery ‘Hershey’s Orange’; and the pure white ‘Snow’. Encore Azaleas®, which bloom in the spring and repeat again in fall, and come in all colors from red through pink, coral, orange and red, also do well.

For reasons of stamen count and somewhat obscure botanical taxonomy, azaleas were stripped of their classification as a stand-alone genus back in the 1700s and have had to live as two sub-genera of Rhododendron ever since. To a non-botanist this may seem arbitrary and capricious because rhododendrons — those mountain-loving evergreens with broad leaves and showy clusters of lavender, pink or white blossoms — seem pretty easy to distinguish from their azalea cousins. But they both have a remarkable history in common — which takes us to the Cretaceous-Paleogene extinction event which scientists say happened some 66 million years ago and wiped out much of the planet’s flora and fauna including, of course, the dinosaurs. 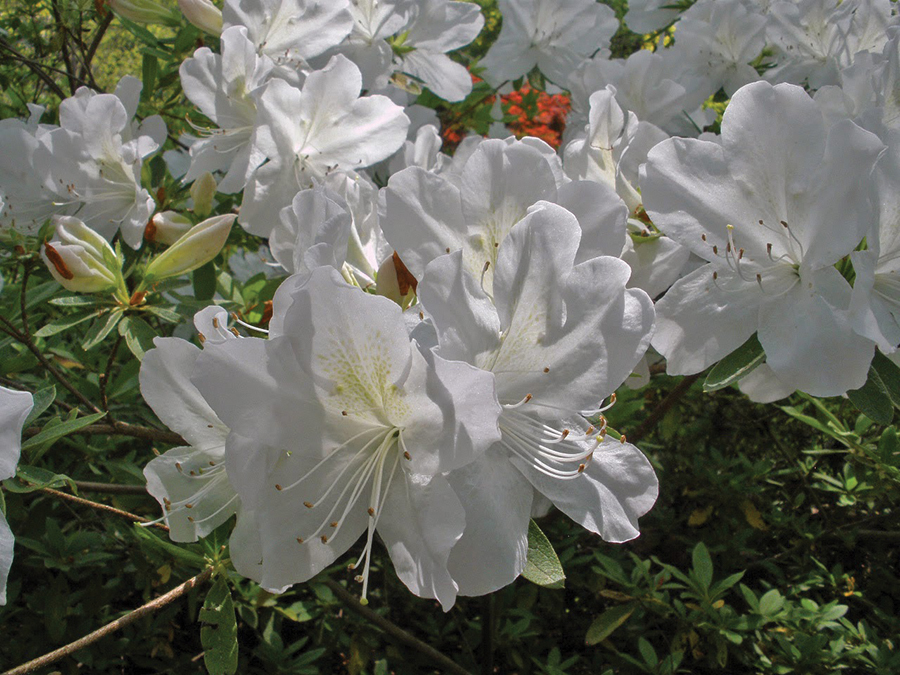 A couple of million years prior to that event, before the last ankylosaurus exhaled its final breath and at a time when Africa was drifting ever so slowly away from South America, the first green shoot of the family Ericaceae pushed its way up through the Earth’s surface and began the job of photosynthesizing and reproducing. And then, when just about everything else on Earth departed the planet for good, members of the Ericaceae family hung in there. As the planet once again became hospitable to a large variety of plants, the family grew and evolved, eventually branching out into over 100 genera. These now include modern-day heaths and heathers, blueberries, cranberries, mountain laurel, rhododendrons and azaleas (acid-loving lime-haters all). In particular, azaleas are part of a unique group of plants that use fungi called mycorrhizae, which colonize their roots and help them bring in water and nutrients in harsh and inhospitable conditions where other plants might not survive.

But how did we end up, 68 million years later, with these spectacular survivors in our backyards? The ancestors of most of our kurume, indica and other azalea hybrids originated in Japan, China or the Caucasus region, where they grew in the wild and were cultivated by gardeners for centuries before Europeans became aware of their existence. By the late 1600s, emissaries from the European continent had begun traipsing around Asia, sending home azalea specimens and seeds — and feeding the insatiable appetites of plant collectors in places like England, France and Holland. The love affair had begun, and by the 18th century it had grown into a serious trading enterprise. 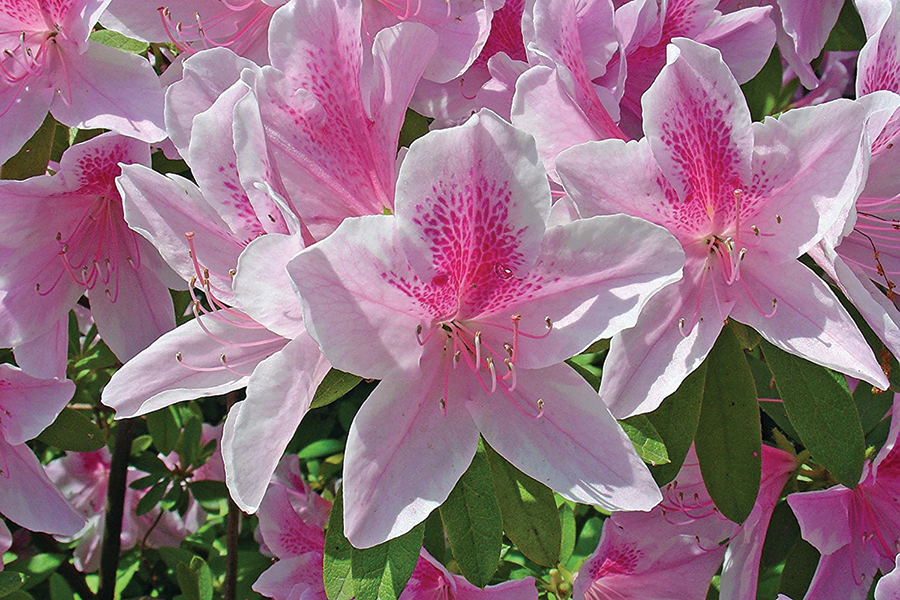 Meanwhile, the American colonies were playing a major role in this transmigration of the Ericaceae family. From the Appalachians to the Southern swamps, amateur botanists like John Bartram and his sons were traveling by horseback and canoe, collecting native plant samples for their eager colleagues across the ocean. Prized among these were more than 25 species of native azaleas like the famous, fragrant, white “swamp honeysuckle” azalea (Rhododendron viscosum) and the “pinxter flower” azalea (R. periclymenoides), which were among the very first azaleas ever grown in England and became the basis for many popular hybrids.

And crisscrossing the Atlantic in the other direction, the first non-native azaleas (offspring of the original travelers from Asia) had already landed in Mobile, Alabama, by the mid-1700s and were brought to gardens in Charleston and New Orleans in the following decades. From Virginia down to Florida and all along the Gulf Coast, as it became apparent that these flowering beauties were perfectly suited to the local climates and conditions, azaleas became the backbone of the Southern garden, even venturing inland. It’s no surprise, however, that the favorites to this day remain the splashy, shameless indicas, which more than any other plant give us that hit of beauty, sensuality, abandon and luxury we welcome as we greet the rebirth of spring in our gardens.  PS