Living by the Book

A cottage with a wow factor

Tom and Katrina Denza are book people. “I even like the smell of books,” Katrina admits. They read paper-and-ink books — thousands of them. Their historic district Southern Pines cottage is designed around his collection of classics, hers of contemporary fiction. Bookshelves are everywhere, mounted over doorways and under ceilings. Books in the kitchen, the dining room, the master bedroom. Katrina can locate every title. The converted attic holds their son’s childhood books. Opposite the front door, a wall of book cubbies lit by an undulating metal lighting fixture with purple globes makes the correct first impression.

“I moved to Southern Pines because of The Country Bookshop,” Katrina, a true bibliophile, confesses.

As for the house, you can’t judge this book by its cover. The sandy-tan exterior, unremarkable except for a long balcony, melts behind a greenery screen, as does the adjacent lot Tom purchased for a garden, pond and firepot. But once inside . . . wow. 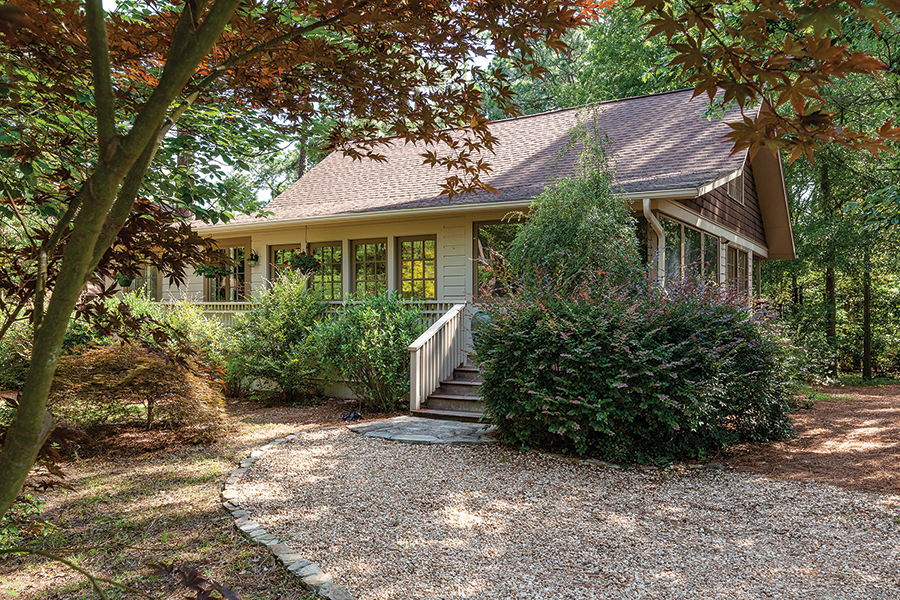 First came the Boyds, then Weymouth, then resort hotels, then winter retreats for wealthy (or sickly) urbanites, then — east of the tracks but downhill from the estates — cottages built for support staff, shopkeepers, professionals, and the less affluent who followed seeking a temperate climate with amenities.

The hotels burned down, mansions changed hands, cottages fell into disrepair. When the tide turned, Weymouth was restored as a cultural center; prominent addresses were renovated; and now, finally, many of the modest cottages have been taken apart and reassembled as small gems.

Still, the Denzas’, built in 1927, stands out in a neighborhood of surprises, first by being inconspicuous. Curb appeal wasn’t a priority. Even the porches and decks accessed by sliding glass doors enhance the interior. “I feel like I’m in a treehouse,” Katrina says.

Both Tom and Katrina gravitated south from states for which nearby streets were named: she from Vermont, he from Connecticut.

Katrina: “The South is so rich with literature. I can feel it in the ground.” Here, she started writing again — a collection of stories with Europe as background and a novel set in Vermont and Carolina. Her activism includes participating in (and reporting on) the Women’s March on Washington in January 2017. A friend told her about the Writers in Residence program at Weymouth Center for the Arts & Humanities. “There is such creative energy in that house.” She now manages the program as well as serving on the board of directors. 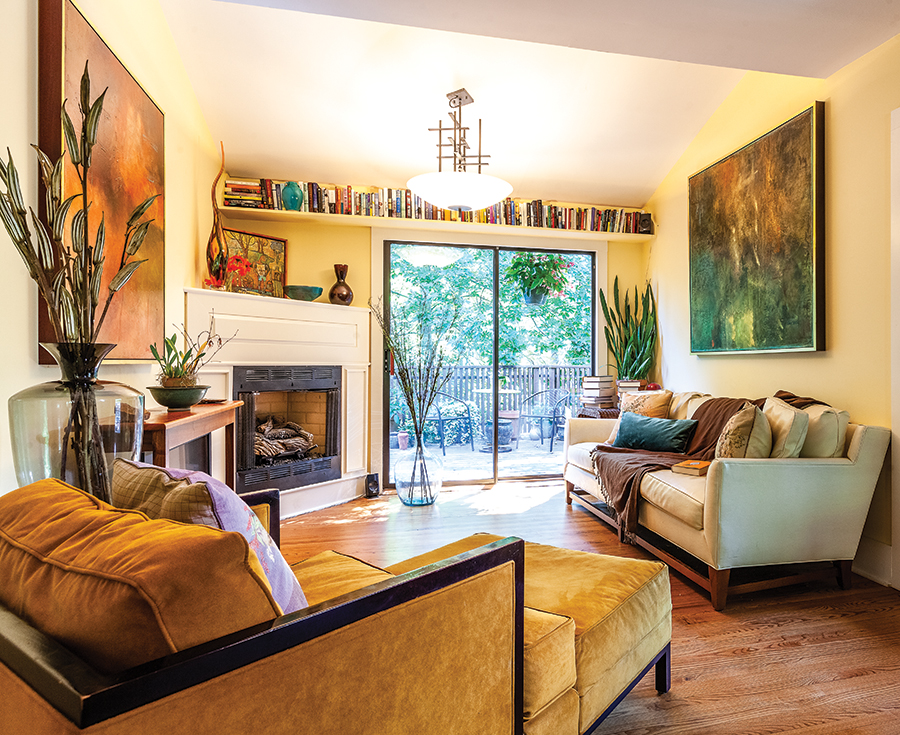 Tom: “I came for the heat and Faulkner — except for that I should have gone farther south.” (William Faulkner was born and raised in Mississippi.) Tom’s travels to Spain made him long for sunshine, warmth and friendly faces. With experience in home renovation gained as a young teen from an 80-year-old Irishman who needed a helper, Tom established a flooring business. “I was young and single.”

Tom bought the cottage in 1986 — a messy, neglected warren of rooms, no air-conditioning — and moved in with the intention of gutting and renovating it himself. This he did, gradually, replacing the roof, even excavating a basement to provide the solidity he remembered from the brick home where he grew up. While tearing down walls he found tiny glass ampoules; perhaps tuberculosis patients who came for the cleansing air once lived there.

The two New Englanders met, married, moved to Midland Road and had a baby while the renovation progressed. 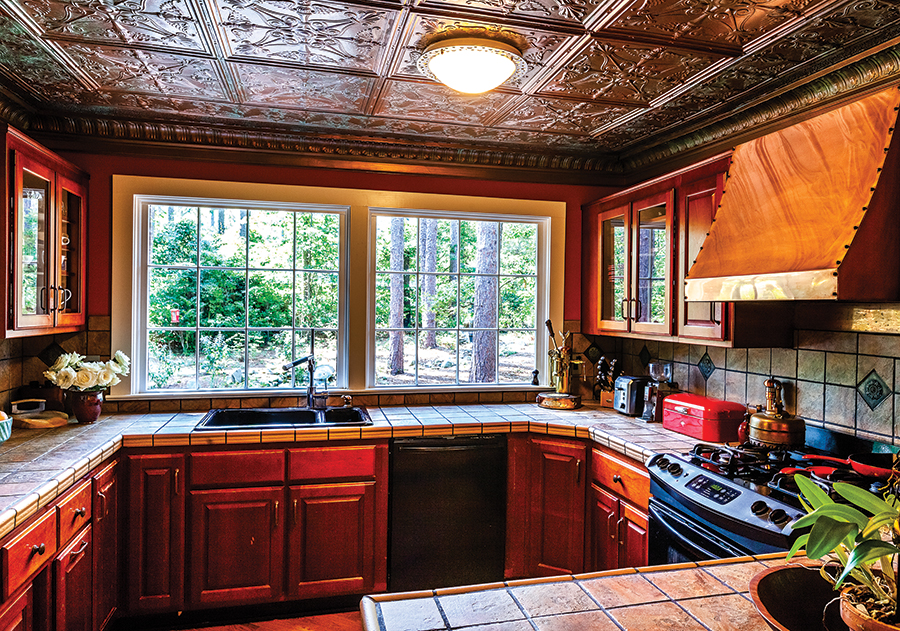 He aimed for something simple, contemporary, vaguely Japanese. “It sounds ridiculous, but there was no conflict,” he says, noting that he and Katrina both admire Frank Lloyd Wright. Katrina selected earth tones. “I have a sense of it, color in small doses, a touch of orange against turquoise, no primaries or pastels.” Tom cooks, therefore planned the kitchen. Katrina chose a hallway overlooking the balcony for her desk bathed in natural light. Stairs to the former attic were tucked out of sight, not to break the expanse.

The entranceway, a separate room, previews Tom’s artistry: Brazilian cherry floorboards form a geometric pattern; a shoe cabinet (Asian influence) came from a train station; Lucite chairs are from Italy; and a massive jug is from France.

There are no rugs to detract from the assortment of woods and styles Tom selected for flooring. 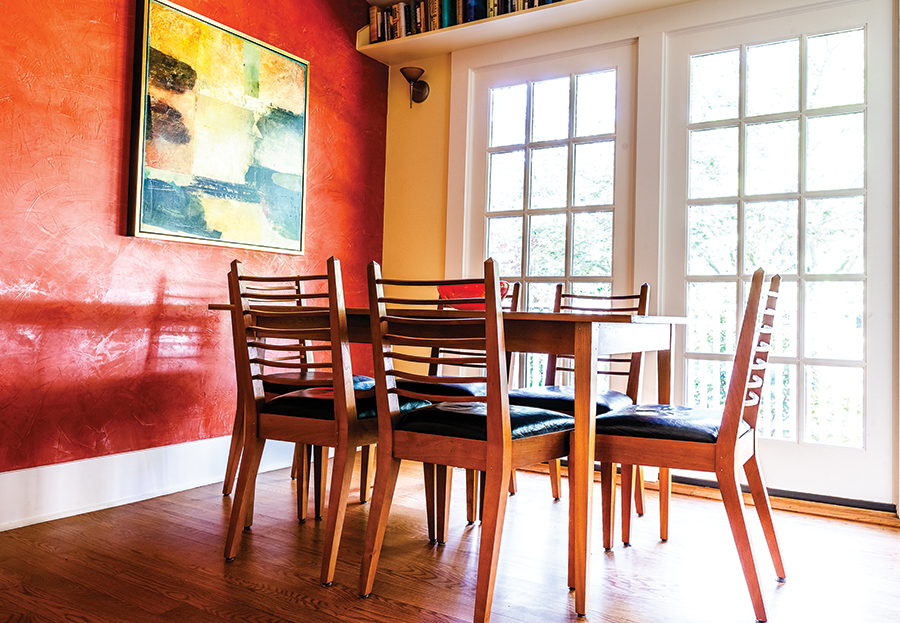 Although it meant structural reinforcement, he decided to move the front door and open the main floor from the dining room at one end to the living room at the other with the kitchen and section of book cubbies in between, creating an unbroken expanse of about 50 feet, 10 feet shorter than a bowling lane. This architectural trompe l’oeil makes a house with smallish rooms appear vast.

Tom and Katrina subscribe to the wabi-sabi Japanese philosophy celebrating the well-used and slightly imperfect. Angled walls and ceilings add interest, character. Scale mattered; a dining room table with Scandinavian lines was custom made of cherry wood to fit the space and seat six, no more. The table stands beside a wall of textured plaster, painted a deep nameless color. Living room furnishings are arranged the old-fashioned way, a semicircle facing the fireplace, for sitting and reading or conversation. No sound system, just a lone, medium-sized TV mounted well below eye level.

Katrina would like to live without it. “We don’t have cable, just Netflix for watching movies.”

Glass doors rimmed in black connect the master bedroom, painted a retro pale avocado, to an arrangement of planters on the deck. The Japanese tone continues with a platform bed and a bathroom in the same shade of green with startling black lacquer accents. Upstairs, Tom planned to finish the attic with a sleeping porch but decided a bedroom, also with platform bed, would be more practical, along with a play space for kids. The upstairs interior bathroom has a large paned window looking out onto the staircase, opposite a real window that brings in natural light. 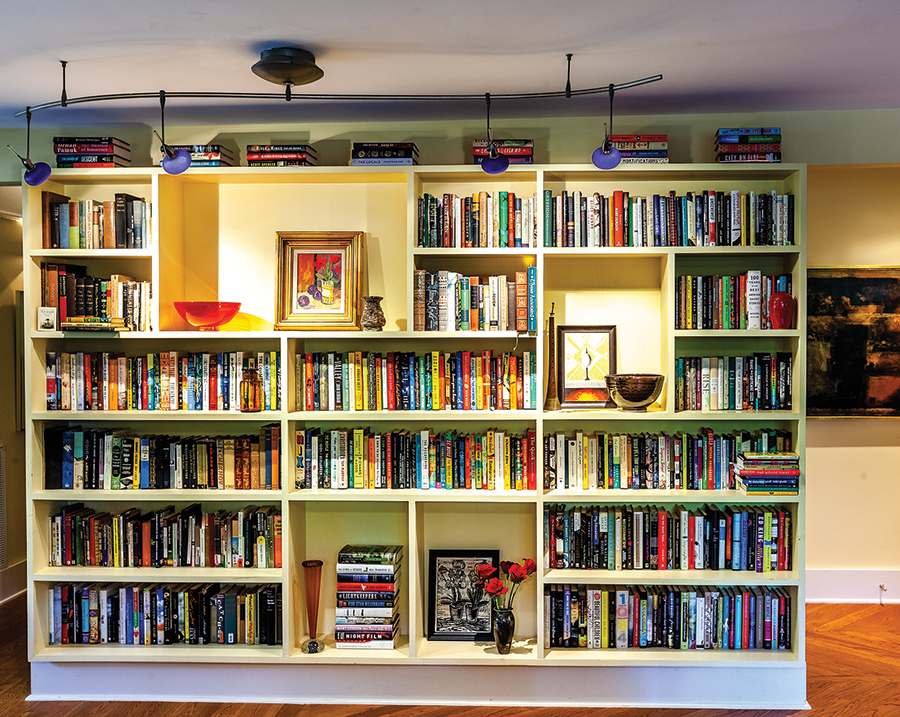 “I saved an original window and thought it would work there,” Tom says.

Tin squares are echoed by square countertop tiles. On them stands Tom’s prize, an Electra brass coffee press made in Italy that resembles an appliance from Leonardo DaVinci’s kitchen notebook. Tom roasts coffee beans outside, puts them through a countertop grinder and transfers coffee to the press to extract a superior brew, one cup at a time. Imagine the aroma.

“I’m very particular,” Tom says of his cooking utensils. “I watched and learned from Chef Warren and Mark Elliott.” First lesson: The right pan and fresh herbs from his garden make a difference. Travels through France don’t hurt. 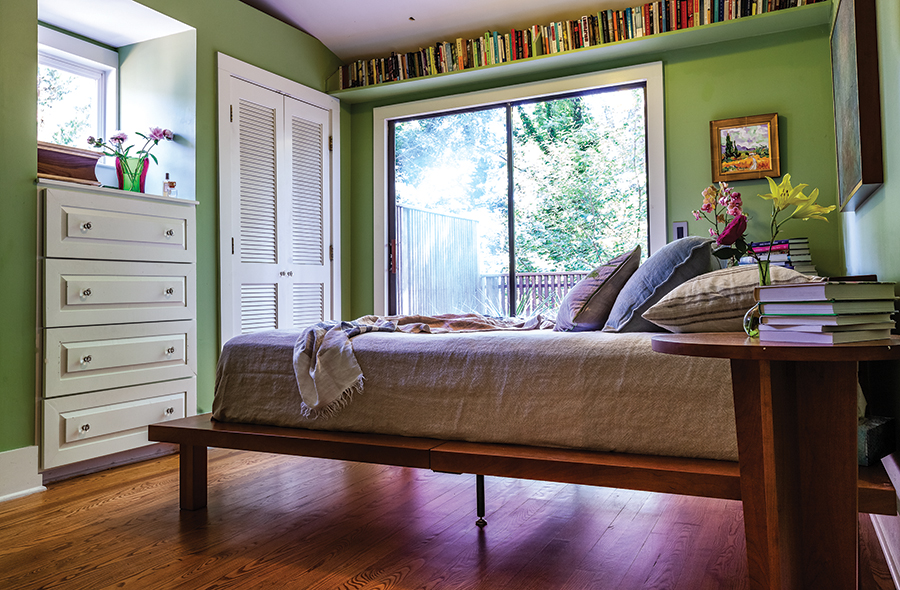 On a par with books, art beats in the heart of this home. Katrina displays works by local artists Jessie Mackay, Denise Baker, David Hewson and others. Larger paintings dominating entire walls are, for the most part, abstracts as in Carol Bechtel, who describes her work as “about how things go together or touch or separate . . . making order from chaos and calmness from tensions.”

How the Denzas acquire art speaks to their relationship. Every year, on their wedding anniversary, they visit a gallery. Each chooses a painting without consulting the other. Amazing, how many times they both chose the same one, Katrina says.

For all its history, personality and artistry, Tom describes the Denza house as simple. Simple for them means a good book, a perfect cup of coffee, intelligent art, frogs in the pond and friends within walking distance — a harmony between people and their environment. Other words, from another book, in another language call it feng shui.  PS