Nursery rhymes are forever. Even the scary ones. They stick in your brain like bubble gum on hot pavement. Here’s proof: “ . . . and dried up all the rain. And the itsy bitsy spider went up the spout again.” Who among us doesn’t remember the opening lines?

Many nursery rhymes are played out in singsong fashion. With some, like Patty Cake, there is physical interaction while you both belt out the lyrics. Now that’s fun. But there’s more to it than fun. Nursery rhymes facilitate the development of a bond between Mom and baby or between siblings or friends. Fun and interaction work their magic, so that the next time Mom says, “Want to play patty cake?” Zap, your hands go up, palms out, ready to play. Your sense of competence subtly notches upward.

So, the sweet words and lulling lyrics of today’s nursery rhymes cement relationships. Time was, though, that nursery rhyme words were not so sweet and nursery rhymes functioned more as transmitters of historical events. They were full of political satire, ribald jokes, religious disputes, violence and sexual innuendos — definitely not for young and innocent ears, not according to today’s standards.

So bad were they that British Victorians founded an association to clean the things up. As late as 1941 the British Society for Nursery Rhyme Reform was still culling X-rated content, excising accounts of animal torment, descriptions of violent human deaths — decapitations, hangings and the like, even cannibalism. Tales for the babies? Not.

Let’s take a closer look at several long-since sanitized nursery rhymes. The majority derive from England. Theories about their origins are numerous and varied, and are difficult, sometimes even impossible, to substantiate. Most have gone through a number of revisions over the years. All the same, the ghouls and goblins might find them interesting.

London Bridge Is Falling Down is as good a place as any to start. One account of its origin has it that a bridge would collapse unless a human sacrifice, particularly a child, was entombed within it. The child would be bricked into the bridge foundation while alive and slowly die from lack of food and water. Lore is that the child would eternally watch over the structure and ensure its stability.

Substantiation, complete with references, of such grisly immurement practices can be found in A Walled-Up Wife: A Casebook: “In 1615, Count Anthony Günter of Oldenburg, visiting a dyke under construction, is said to have found the workmen about to bury a child beneath it. He rescued the child and reprimanded the mother, who had sold it for the purpose.” Another passage suggests that, “When the castle of Liebenstein in Thuringia was being built, a child was purchased from the mother and walled in.” And so on. So much for the hod carriers union. 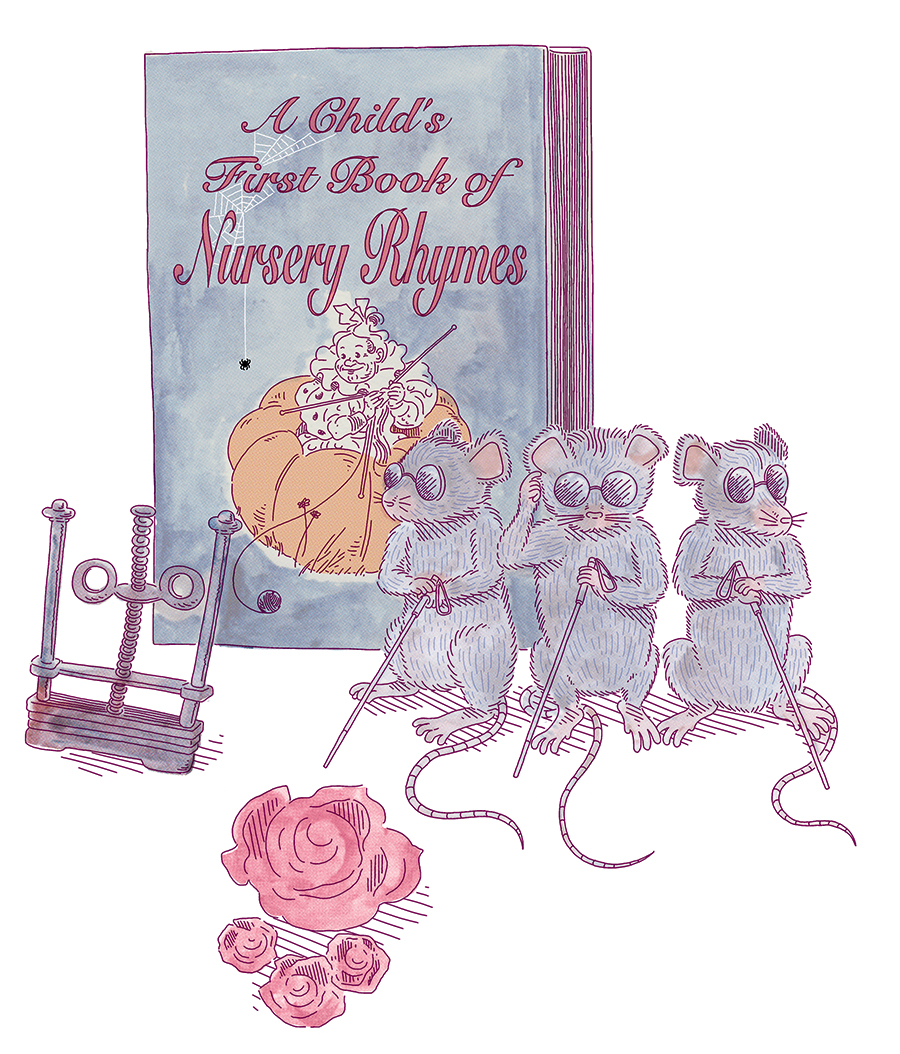 Then there is Ring Around the Rosie. As with most, there are several claims regarding this nursery rhyme’s origin. One refers to the 1665 Great Plague of London. The “rosie” was a rash that appeared on those who contracted the plague. It gave off such a stench that the afflicted would attempt to suppress it with a pocket full of posies.

“Ashes! Ashes! We all fall down!” supposedly reflects the fear that all would eventually get, and die from, the plague. (Indeed, about 15 percent of the country did just that.) The “ashes” were the cremated remains of the deceased.

The daughter of Henry VIII and Katherine of Aragon, Mary I, is thought to be the subject of Mary, Mary, Quite Contrary after Henry got big on Protestantism and established the Anglican Church when the Catholic Church repeatedly denied him the right to a divorce. But Mary wasn’t having any of that business. She was hardcore Catholic and after she took the reins, though unsuccessful, she was quite contrary about returning the country to Catholicism.

Her reign was a scant five years, yet, during that time her garden grew — her “garden” being graveyards populated by Protestant martyrs. Not for nothing did they call her “Bloody Mary.”

Mary was a busy beaver. She instituted a turn-or-burn policy and during her brief reign, had over 280 religious dissenters burned at the stake. To assist those having trouble deciding to convert, she employed little gadgets like “silver bells,” actually bone-crushing thumbscrews. She also was fond of “cockleshells,” torture devices that were attached to males’ nether reaches.

Fortunately for an English population quite satisfied with their Anglican Church, Mary’s stint as the first Catholic woman on the throne of England was limited. Weakened possibly from uterine cancer, she is thought to have died at the age of 42 from the flu.

One of the oldest nursery rhymes is Three Blind Mice. The earliest version, along with music, was published in 1609. (Incidentally, that was the year Thomas Thorpe published sonnets written by a dude dubbed the Bard of Avon. Hint: nothing to do with cosmetics.) Moving right along, Three Blind Mice, as we know it, is also said to be grounded in Bloody Mary’s reign. The three mice are thought to be two bishops and the Archbishop of Canterbury, who plotted to remove Mary from the throne. Big mistake. Mary uncovered the scheme and had each of them burned at the stake. You don’t mess with Mary.

Our final nursery rhyme is Georgie Porgie, the origin of which actually has been substantiated through court documents and diaries. Remember Georgie Porgie? “Georgie Porgie, pudding and pie; Kissed the girls and made them cry; When the boys came out to play; Georgie Porgie ran away.”

Certainly sounds innocent enough for tender ears. In fact, George was none other than George Villiers, bisexual nobleman and lover of King James I. George’s close friendship paid off nobly, too, when the King publicly proclaimed his love for George and named 31-year-old George Villiers the Duke of Buckingham.

George was equally fond of the ladies and had affairs with daughters and even the wives of powerful Englishmen. Ladies were warned against being alone with George, kind of an early Harvey Weinstein. Understandably, George’s randy nature and activities generated a certain amount of strain, but his relationship with King James also generated a certain amount of immunity.

And so it was that today’s delicate expurgated nursery rhymes evolved from backgrounds well suited to Poe or perhaps Steven King or maybe the Brothers Grimm.

“Itsy bitsy spider went up the water spout. Down came the rain and washed the spider out. Out came the sun . . . ” PS