Agora Café is the new Pinehurst bakery and eatery where Southern hospitality meets French bistro — think biscuits topped with herb butter, fresh salads and craft lattes for sale at the counter. Chef Emmy Hirengen relocated to the Sandhills all the way from Oregon just to helm the new gathering place co-owned by Ginny and David Tran, Robert and April Bortins, and David and Bethany Morgan.

The café is Ginny’s brainchild. She started making macarons while raising three, now four kids, as a stay-at-home mom. “Baking was her outlet,” David says about his wife. In short order, Ginny’s macarons became popular, and she and a friend launched a baking business from their home kitchens in Raleigh. Then the Trans relocated to the Sandhills for David’s job. “We kind of took a leap of faith and said, ‘OK, let’s do this, let’s create a bakery,’” he says. The café officially opened in September.

But Ginny didn’t want Agora to be just a bakery, she wanted it to be a gathering place, particularly for moms. In ancient Greek city-states, agora, which literally means gathering place or assembly, was the hub for conversation, debate and buying and selling wares. “She wants to build this community of stay-at-home bakers that we’ll buy from wholesale, or we’ll do whatever we can to promote them in the shop,” says David. 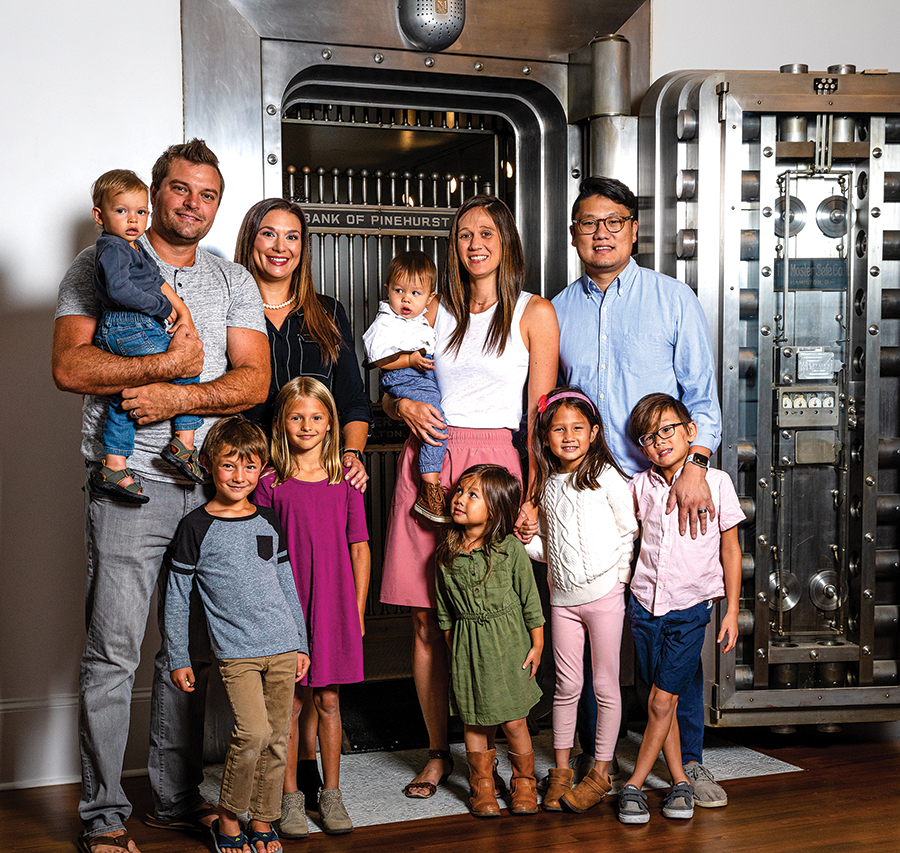 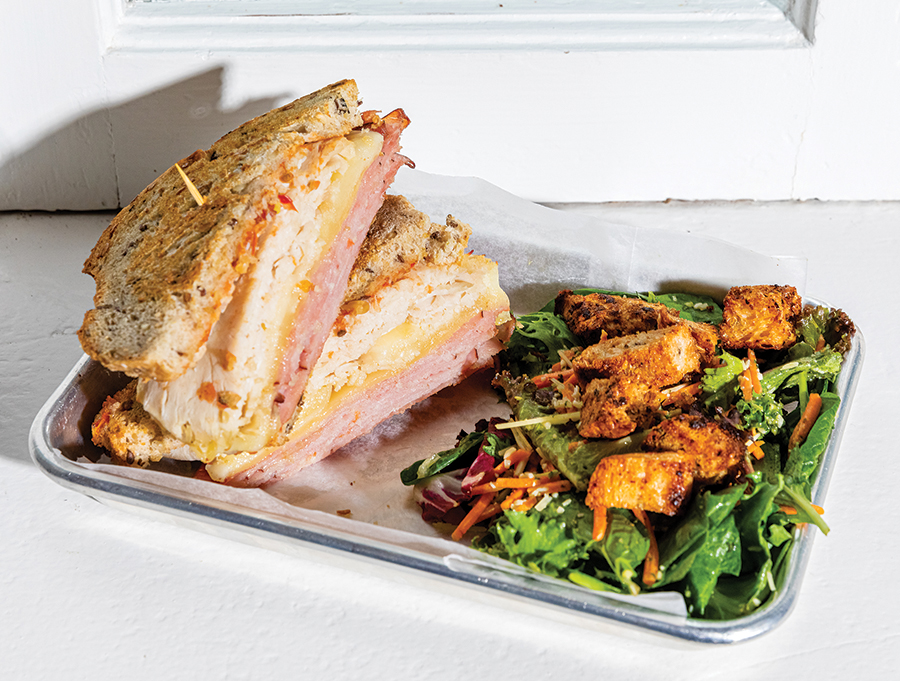 Husband-and-wife restaurateurs James and Keena Lam opened The Block in mid-August as a merger of their former Southern Pines’ eateries Bambu Boba Café on Broad Street and Steve’s TK Pizza & Subs on Morganton Road. “Even though both spots were within a minute or two of each other, the idea of them being here together, allowing us to focus on the quality of the food, that was the main thing for us,” James says.

Agreeing on the merger wasn’t an easy decision. Steve’s had been a popular establishment on Morganton Road for six years, and uprooting the eatery worried the Lams. But the risk proved worthwhile. “It has been insane,” James says, commenting on business since The Block’s launch. “We’ve been selling out every other day. Even though we loaded up with food, it’s hard to keep up.”

The Block caters to the whole family, from picky eaters to foodies, in a one-stop shop. “You’ve got Asian dishes, pizzas, subs, teriyaki, you name it,” he says, “burgers, fries, just a little bit of everything.” That includes Boba tea, the popular Asian drink that’s chock-full of chewy tapioca balls.

The Lams’ authentic Vietnamese food is always droolworthy, but pizza is their up-and-comer. “Our pizza was good before, but with this pizza oven,” he says, motioning toward the kitchen, “it’s a couple of levels higher.” 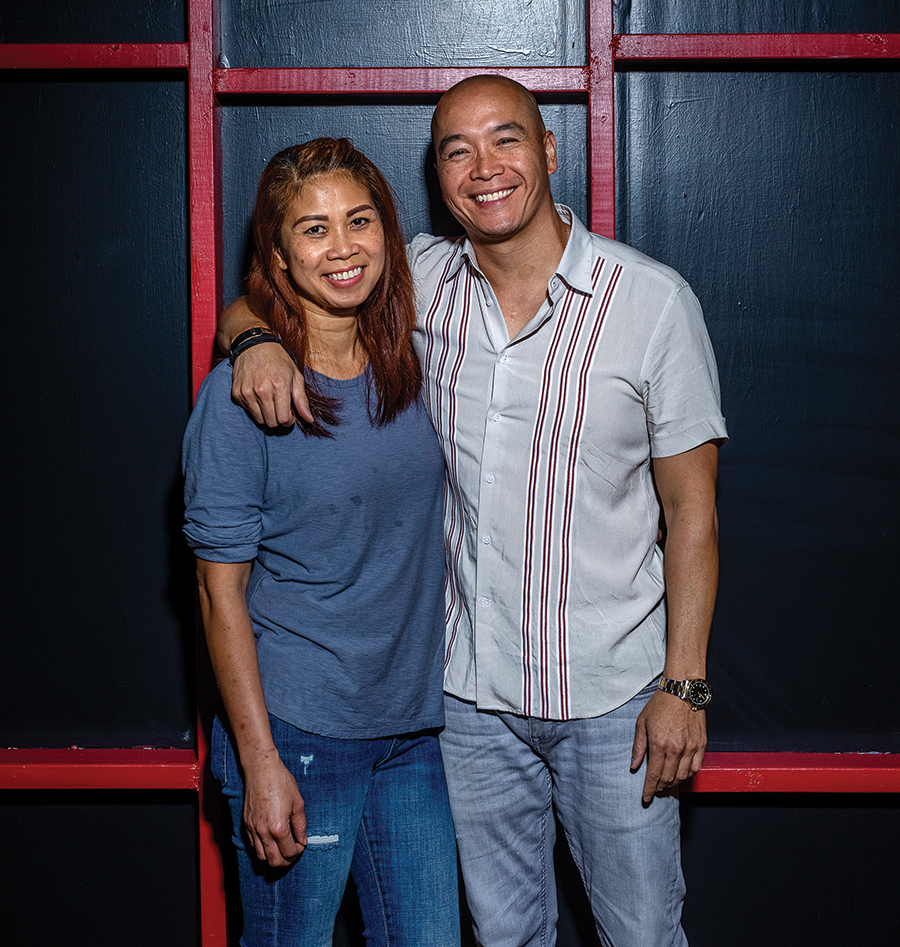 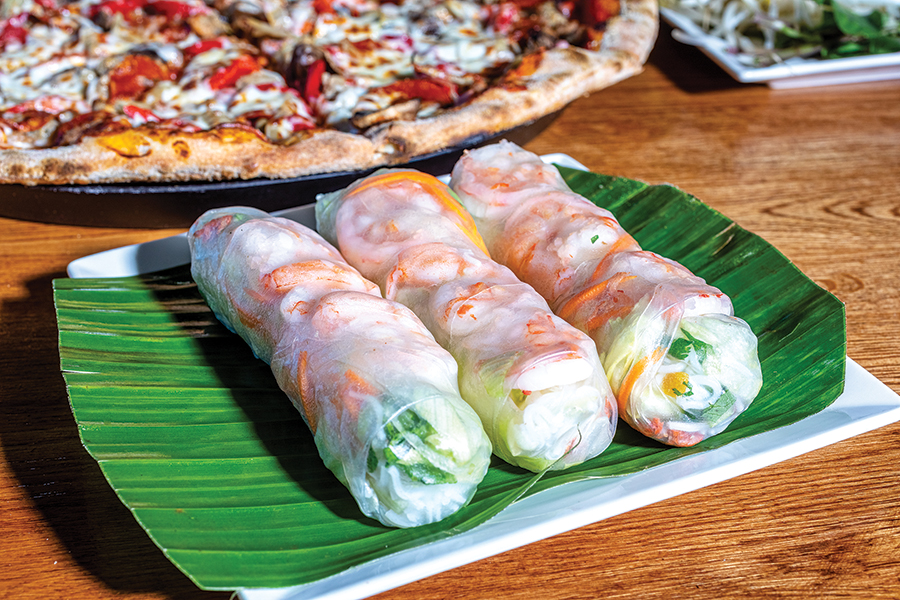 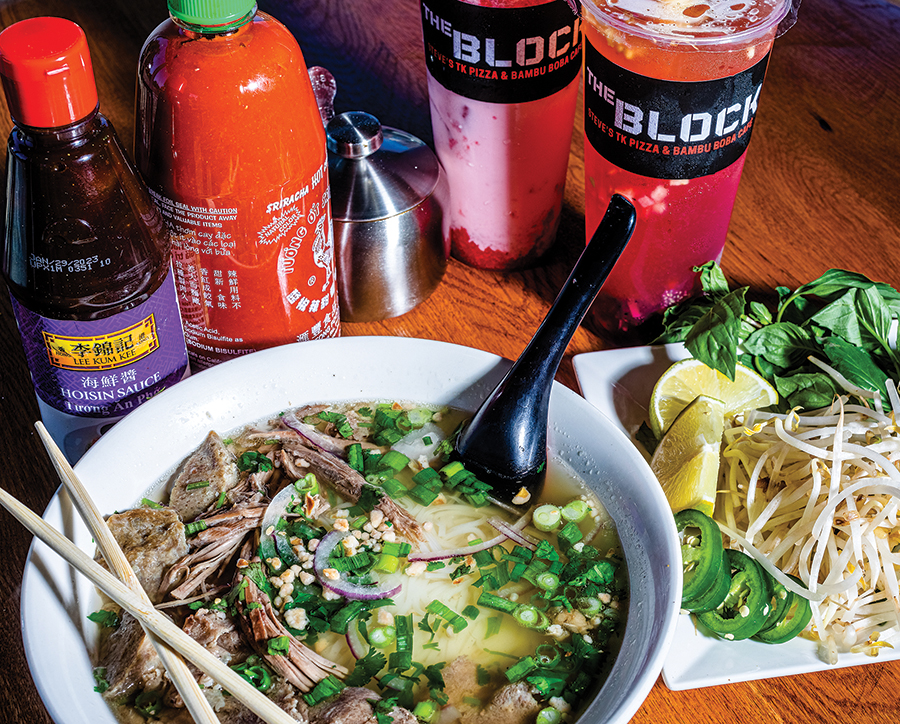 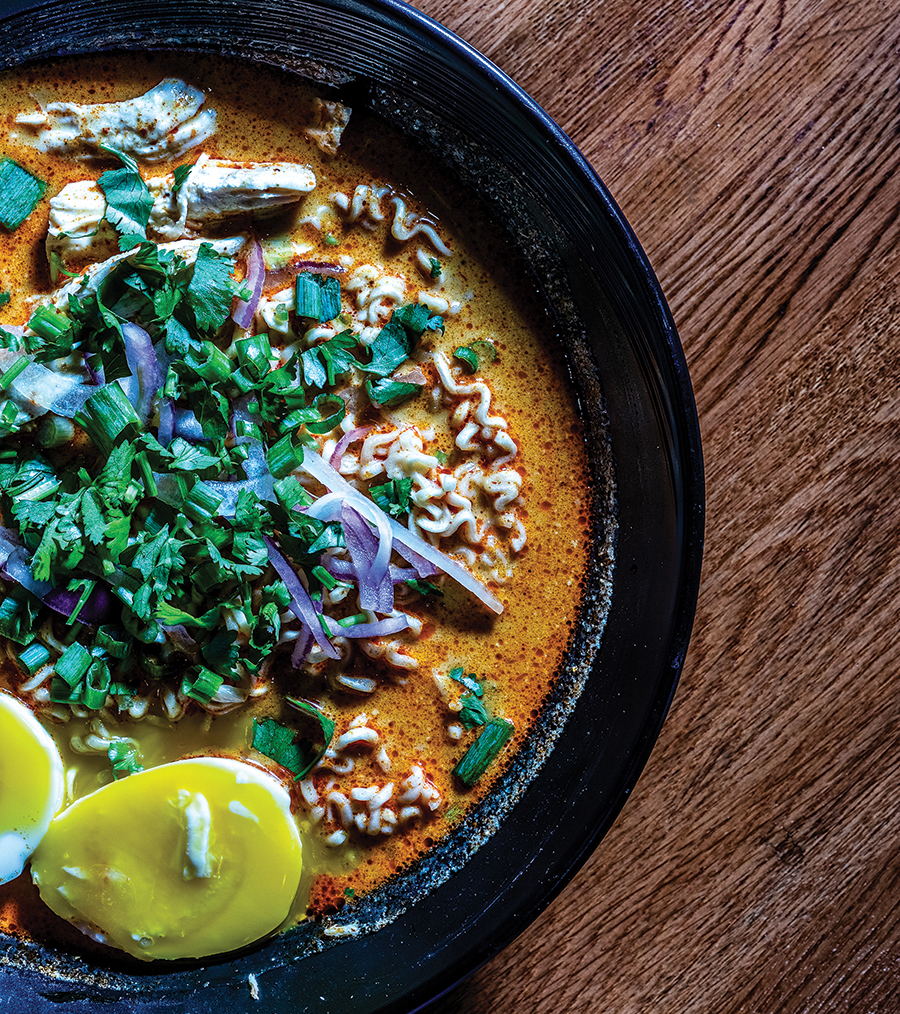 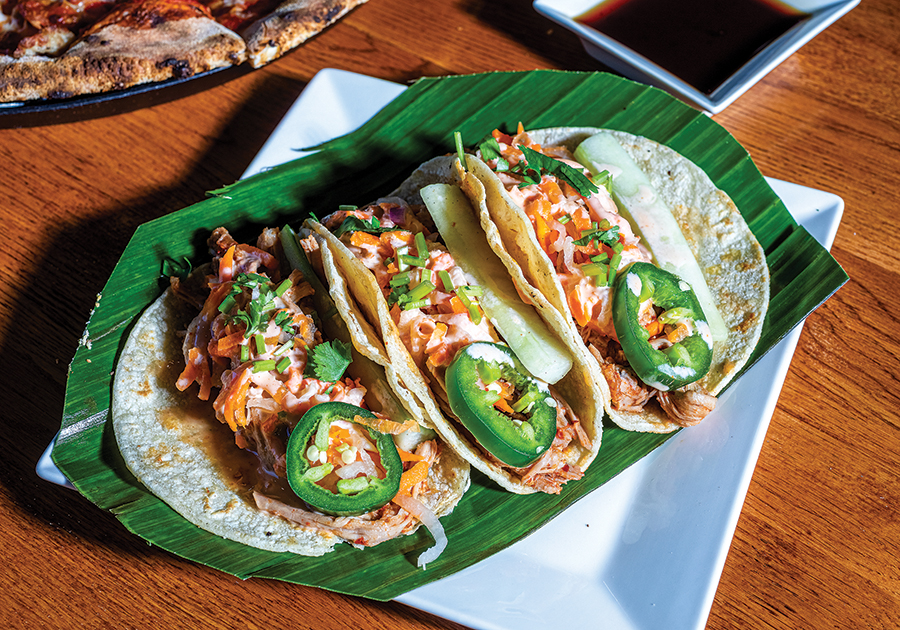 Ekambaram “Maran” and Jayarani “Jaya” Elamaran started selling their Indian food while working at Nature’s Own Natural Foods Market in Southern Pines. Karen Frye, the owner of the market, gave the Elamarans the opportunity to start selling Jaya’s Indian food in a daily, prepared-foods case in her store about six years ago. “We would sell from the daily case five to 10 meals every day,” Maran says, describing how they dipped their toes into the food industry.

Word started to spread about Jaya’s Indian cooking, so the Elamarans decided they wanted to purchase a food truck. Complications put that plan on hold, and they opened their former takeout location on May Street in 2018. About 200 people showed up to the opening. “We got nervous, me and my wife,” Maran says, thinking back to the long line of customers on that cold day. But too many customers is a good problem to have, and the food was worth the wait.

About four months after their takeout location opened, they finally got their food truck and ran both operations in tandem. Then customers started asking about dining. “So, we thought, ‘OK, we need dining,’ because we know that people will come,” Maran says. After three years of takeout, the Elamarans moved out of their May Street location and opened their new dine-in restaurant on Broad Street in July, serving up much-loved favorites like chicken tikka masala and vegetable samosas. 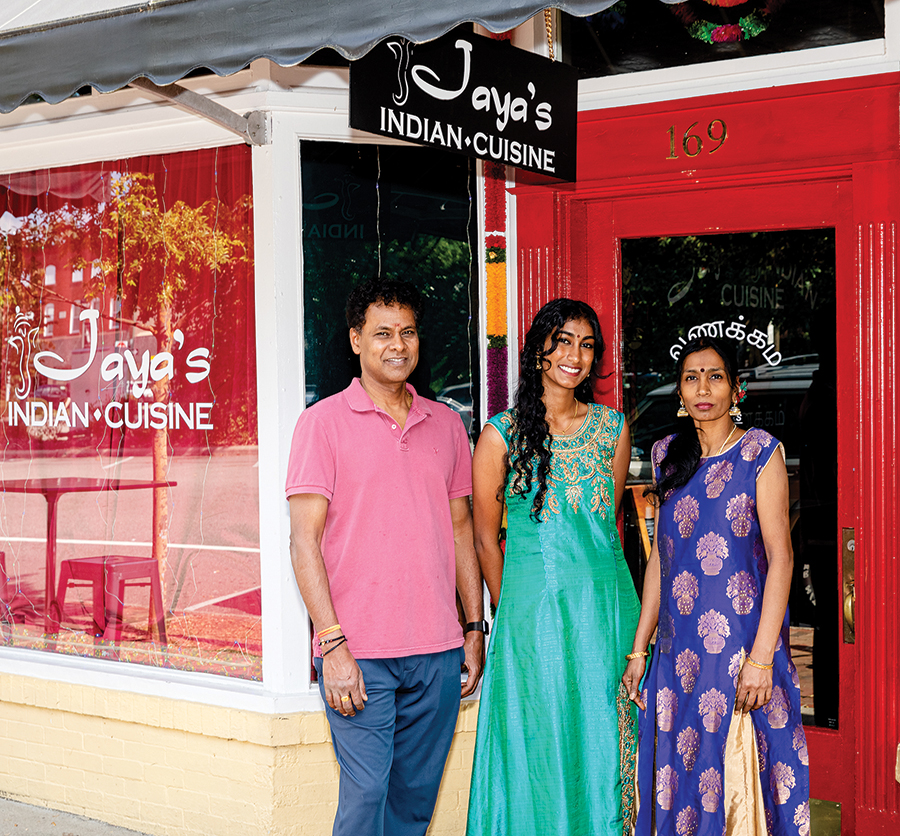 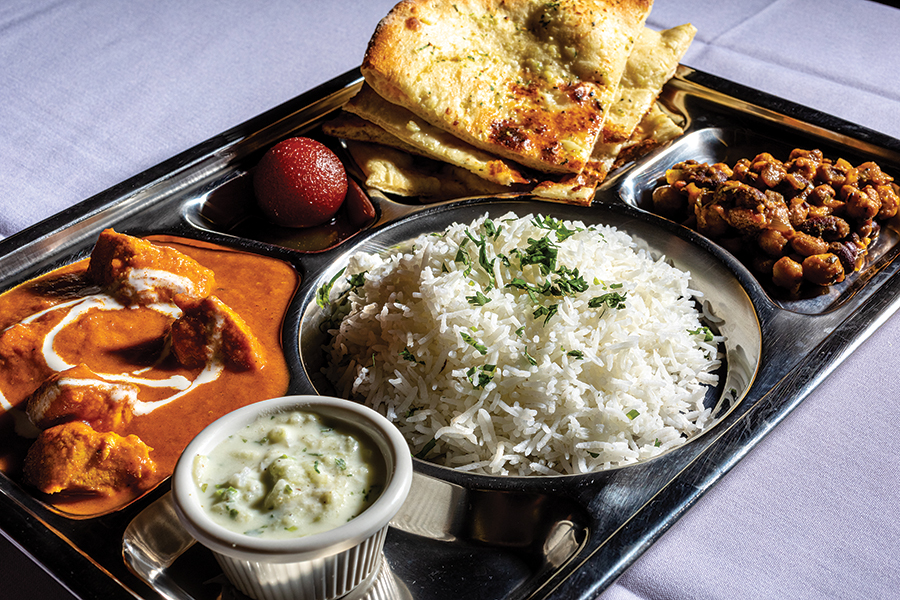 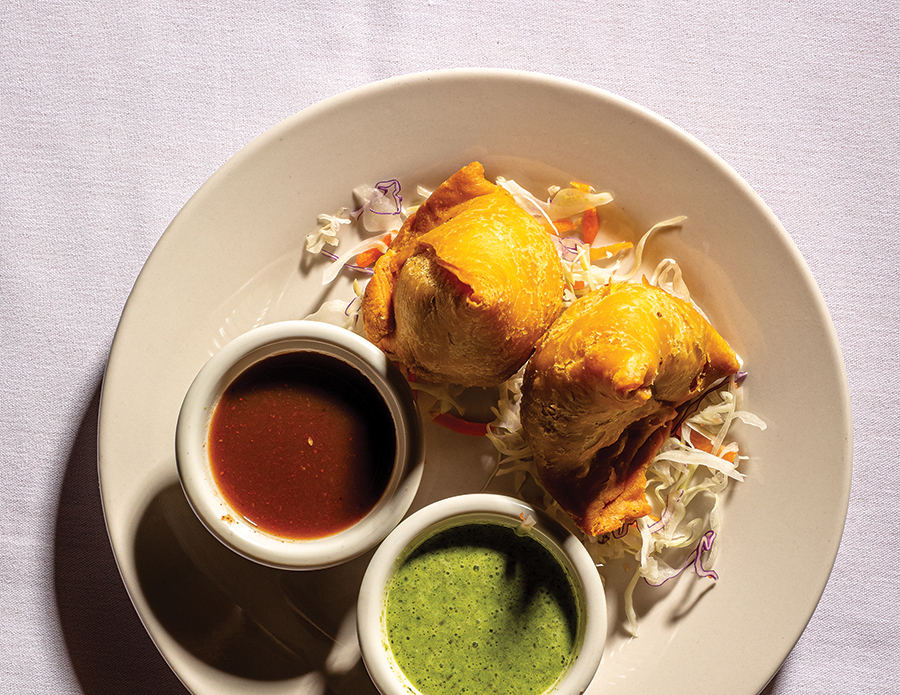 “My girlfriend, she loves cats; Neko means cat in Japanese,” says Phon, owner of Neko Thai and Sushi Bar in downtown Pinehurst. The restaurant’s logo is the maneki-neko Japanese figurine, a “beckoning cat” intended to bring good luck to the business owner.

Neko marks Phon’s debut as a restaurateur, but he has worked in the restaurant industry in a variety of positions ranging from server to manager to sushi chef for over 10 years. “I did so many things, it was time for me to open a restaurant myself,” he says. “It was a gamble, but everything worked out well.”

Phon relocated from Florida to the Sandhills just to open his new Asian fusion restaurant after scouring Midwestern and Southern states for the ideal spot. “People that live in the village always come here two or three times per week, so I’m really happy,” he says. Neko opened in April, and Phon says business has been steady almost from the start.

Phon is Thai, but he’s an experienced sushi chef, so Asian fusion made sense as his restaurant concept. It made even more sense because he saw so many Asian fusion restaurants succeed in Florida. “When you come here with your family, maybe your dad doesn’t like sushi, but he might like Thai food, so you’ve got something for everybody,” he says. 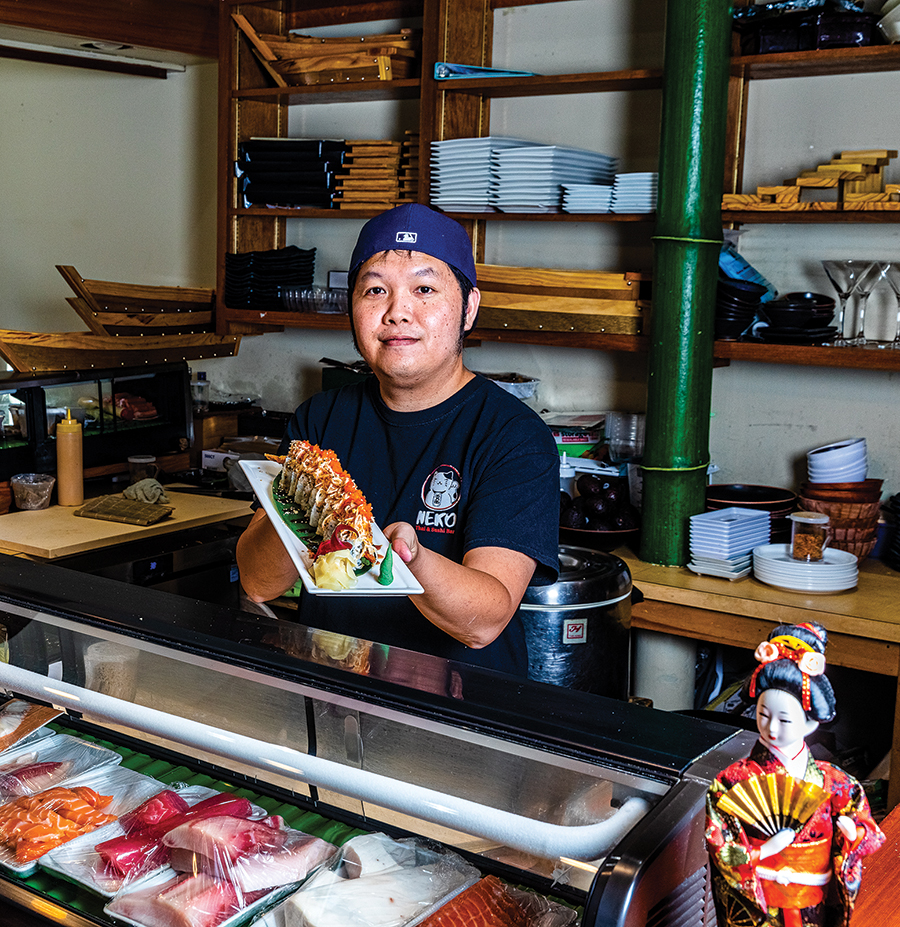 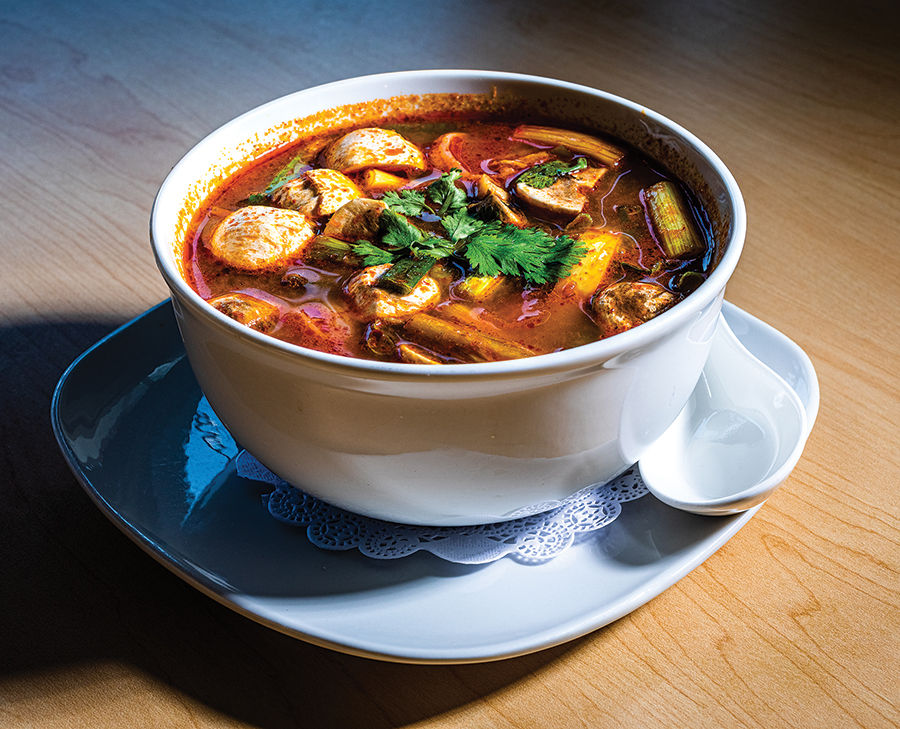 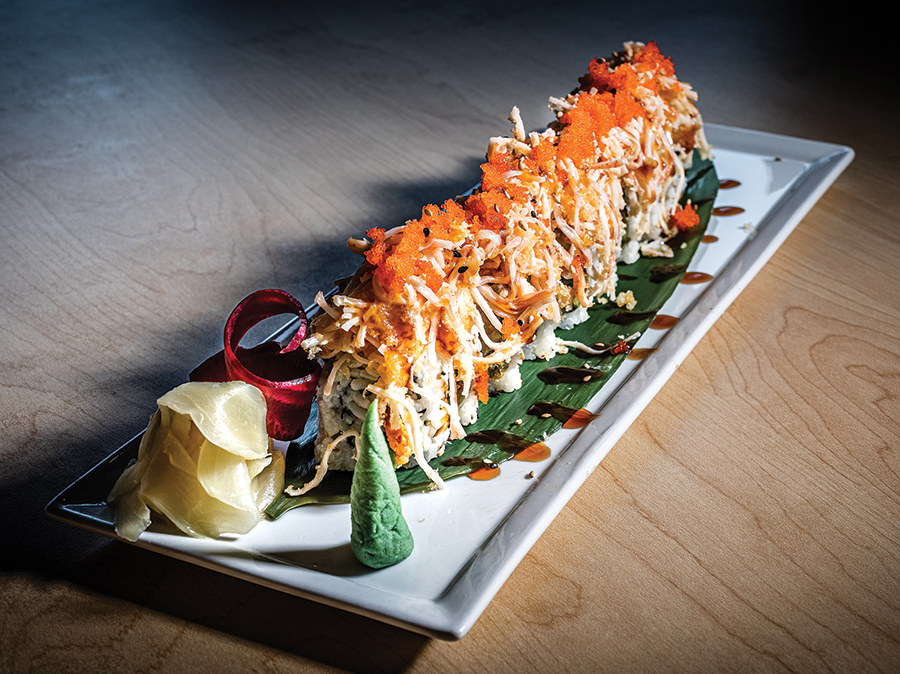 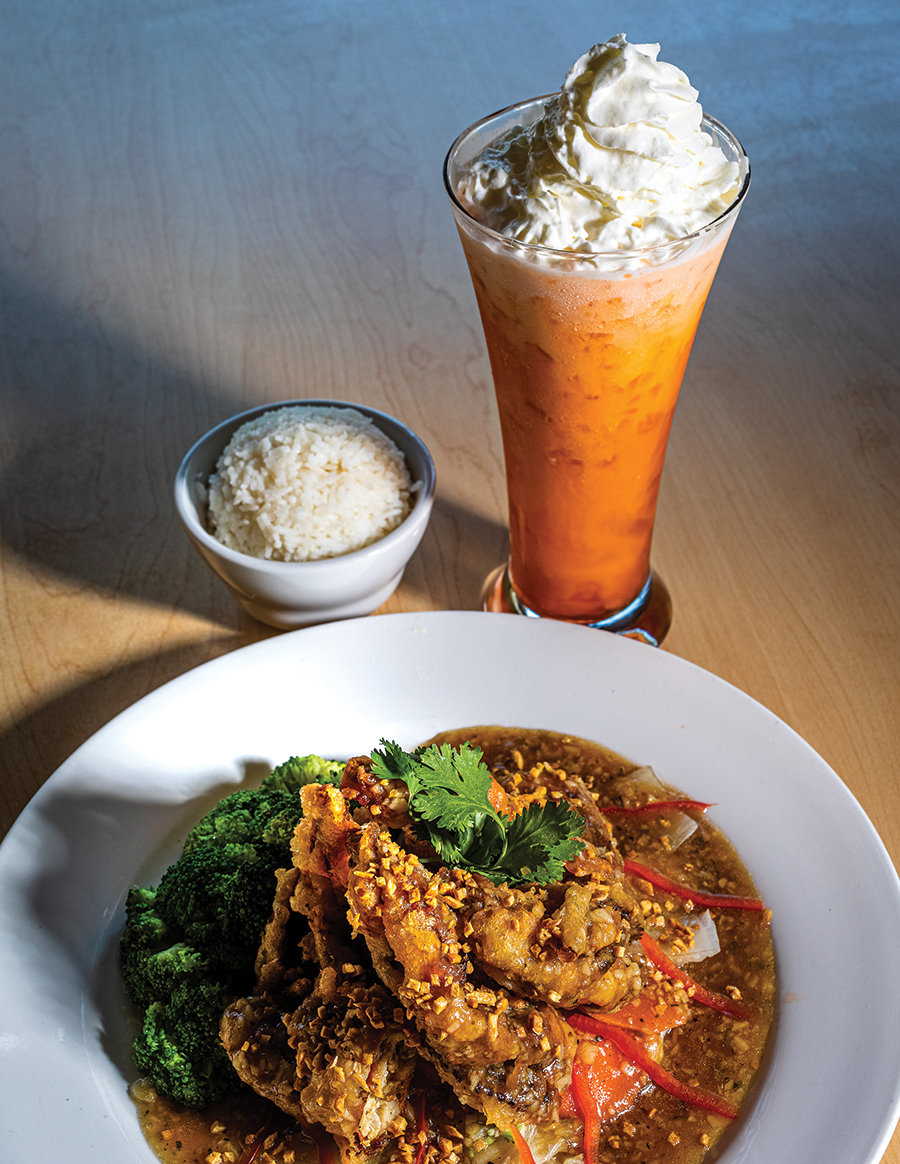 When Nathan Lonnen’s best friend from college nudged him to open a restaurant in downtown Aberdeen, he did, making the move from Charlotte to the Sandhills. He has worked in the restaurant industry since college and has helped several restaurants open, but The Workshop Tavern is the first he’s owned.

“It was the perfect chance to blend my woodworking and creativity into what I want in a restaurant,” Nathan says. In five months, he built out the restaurant almost entirely by hand, from the wooden bar and tables to the accent wall in the back. He even painted the artwork that hangs on the tavern’s walls. Nathan wanted to create a down-to-earth atmosphere that embodies the craftsman’s journey, whether it’s in woodworking or crafting a pulled pork sandwich and an old fashioned.

“My roots are in upstate New York, and I just always remember big food with a lot of flavor,” he says, and that’s what he wants for The Workshop Tavern. “The community has embraced us a lot. It’s been great. It definitely makes the long hours worthwhile when people come in, and they’re happy to be here.

“I just want to say thank you to everybody that’s supported us in this endeavor throughout the eight months that we’ve been open — it’s been a ride so far.” 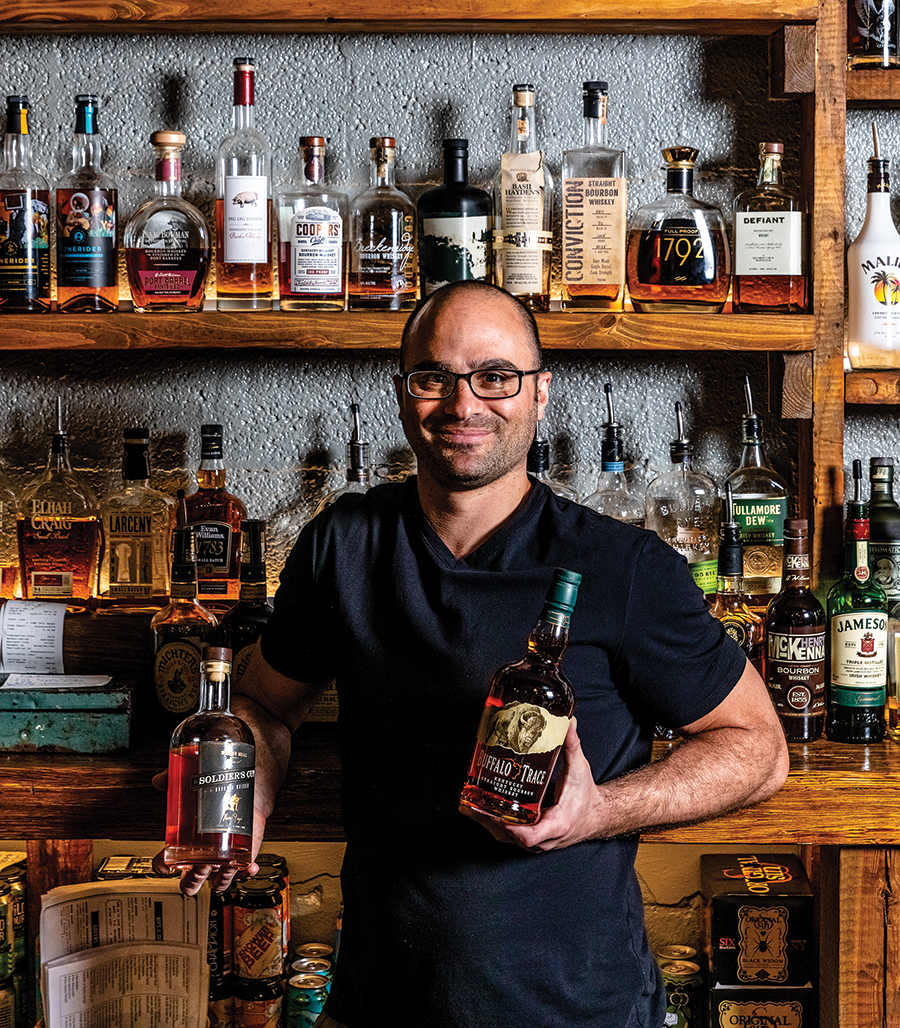 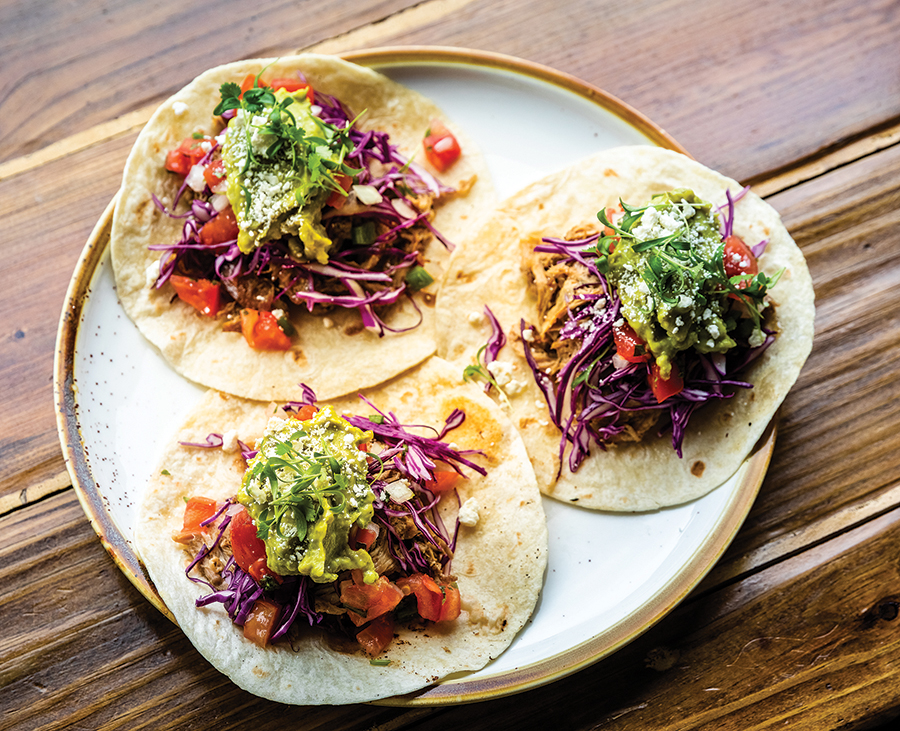 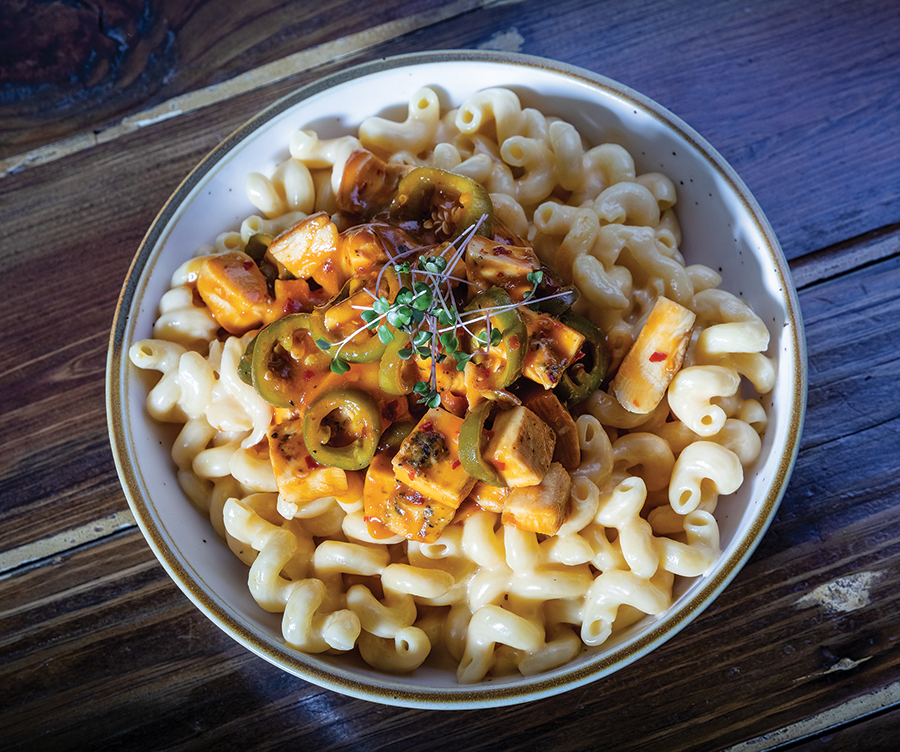 “The concept is Southern brunch — fried chicken and champagne,” says Orlando Jinzo, owner of YellowBird Southern Table and Bar with Sonja McCarrell. They’ll be serving up sweet and savory waffles, smoked brisket deviled eggs, fried green tomatoes, wagyu and bison meatloaf and, of course, chef-driven craft cocktails. But the Southern fare will be fresh and seasonal, so patrons don’t feel bogged down.

“Believe it or not, I grew up in Arizona, but most of the food we ate was Southern because those were the cookbooks my mom had,” Orlando says. “So, I grew up eating fried chicken and biscuits and cornbread in the Southwest.” Sonja grew up on Southern food, too, but right here in North Carolina.

Orlando and Sonja also own Leadmine Whiskey Bar and Kitchen in Southern Pines. After their plans for a second Leadmine in Raleigh serendipitously fell through, YellowBird was born. “Leadmine isn’t family-oriented,” Orlando says. “We play explicit rap music on the weekends. Here? It’s family-friendly. It’s literally opposite sides of the coin.”

YellowBird will be serving up brunch all day after their soft opening on Tuesday, Nov. 2, and their grand opening on Sunday, Nov. 14.  PS

Jenna Biter is a writer, entrepreneur, and military wife in the Sandhills. She can be reached at jennabiter@protonmail.com. 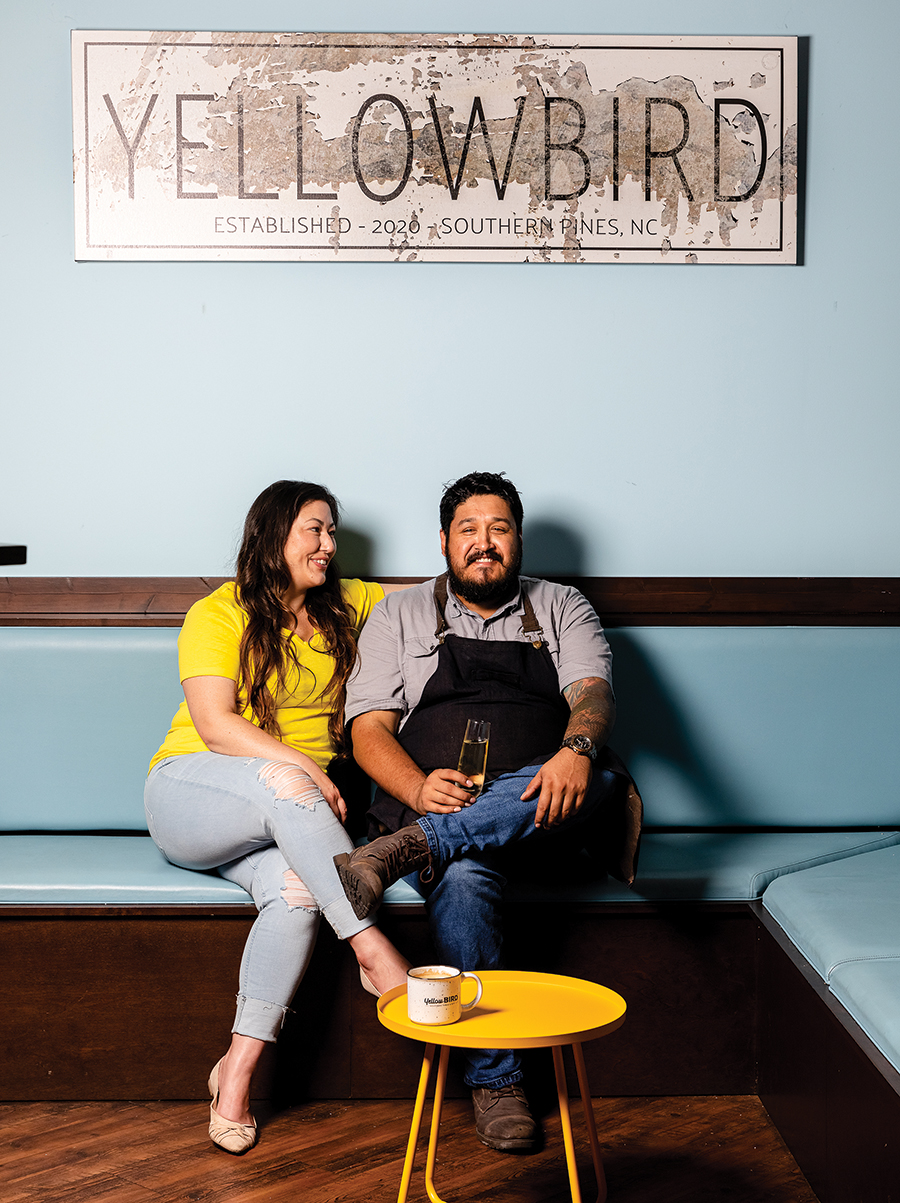 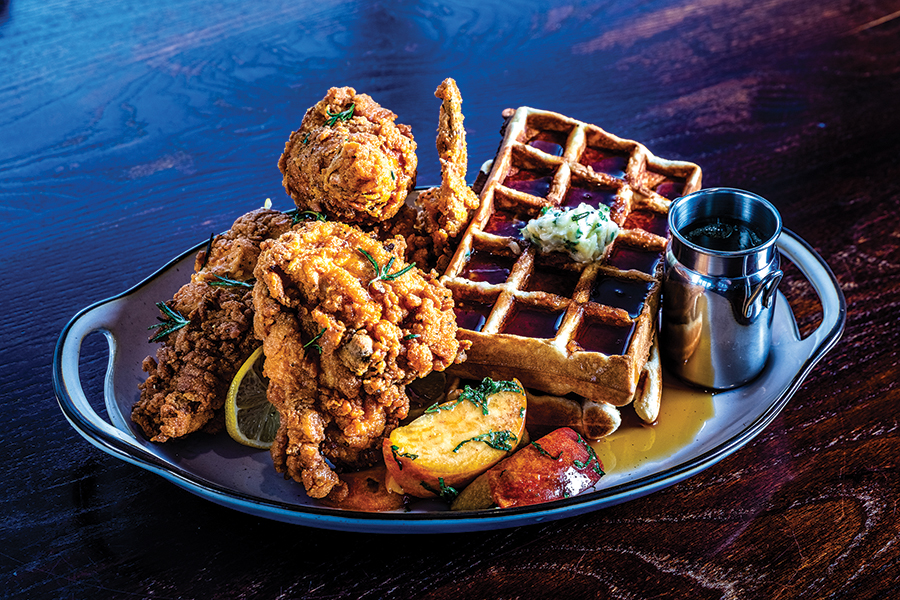 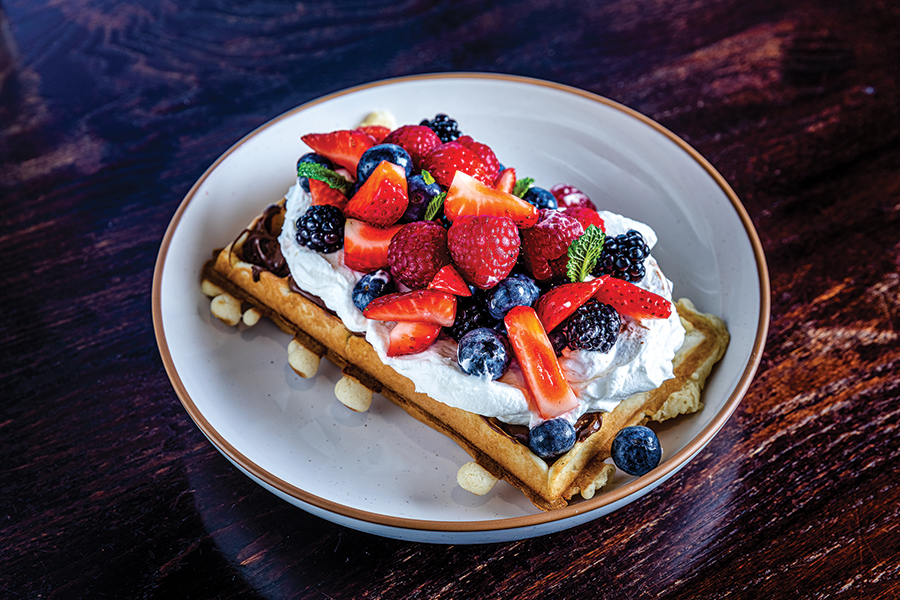 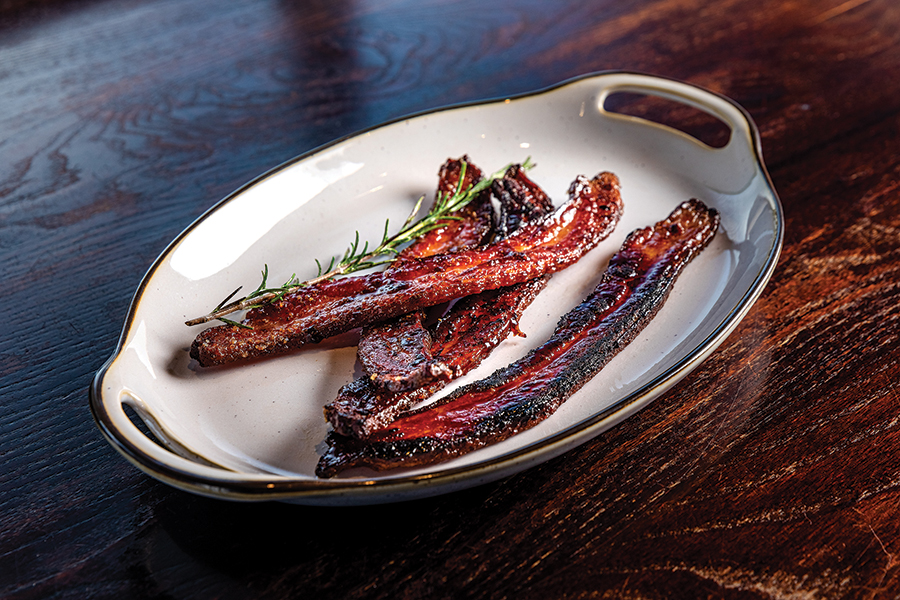 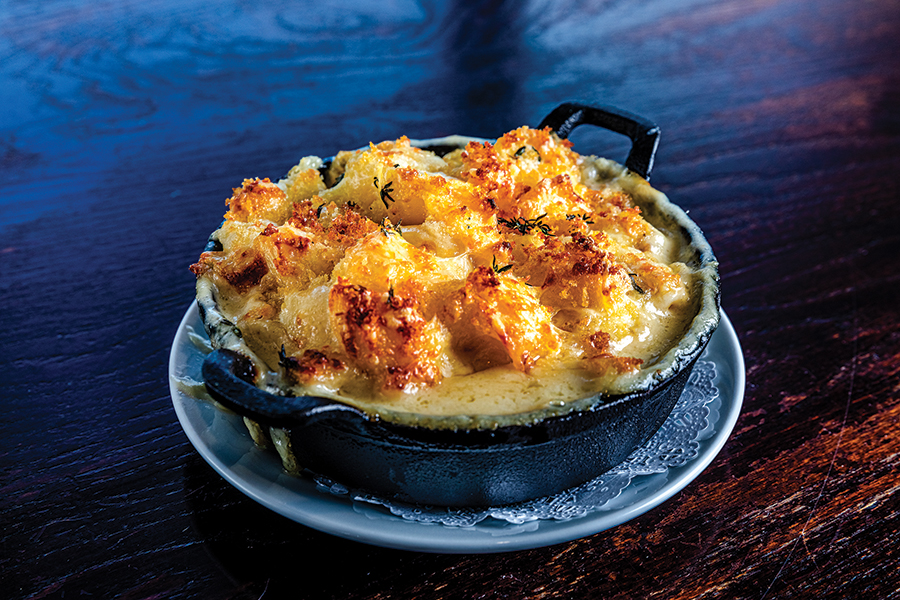