Not just another roadside attraction

There is a man in Columbus County who creates dinosaurs in his backyard. He also builds bulldogs, painting some in tidy Marine Corps dress blues, and lighthouses as tall as an NBA player. Giant flamingos wearing bow ties and top hats watch him work, as kaleidoscopic cows, horses and zebras graze in the fields around him. A centaur points toward a pond where oversized herons hunt for giant, glittering fish heads. Gargantuan golf balls are teed up beside polar bears. A whale that can’t swim breaches in the distance. A Jolly Green Giant, undoubtedly responsible for the massive tomatoes and colossal watermelons growing nearby, startles a glass-eyed Pegasus; it rears up on its hind legs, wings flapping. Overlooking the whole tableaux is a 50-foot tall woman — a Uniroyal Gal, to be precise — wearing a cowboy hat.

No, it’s not a fever dream. This is Grahamland, an 8-acre fiberglass menagerie on the side of U.S. 74-76, halfway between Lake Waccamaw and Wilmington. If you’ve ever driven that stretch of road, you’ve seen it. It’s impossible to miss, even at 70 miles an hour. The sculptures stare out at the highway, imploring you to pull over for a closer look, and many people do. Fiberglass artist Hubert Graham might get 20 visitors from across the state, country and world on a good day. Some people buy a sculpture — all of Graham’s work is for sale — but everybody asks the same question: Where on Earth did all this stuff come from? 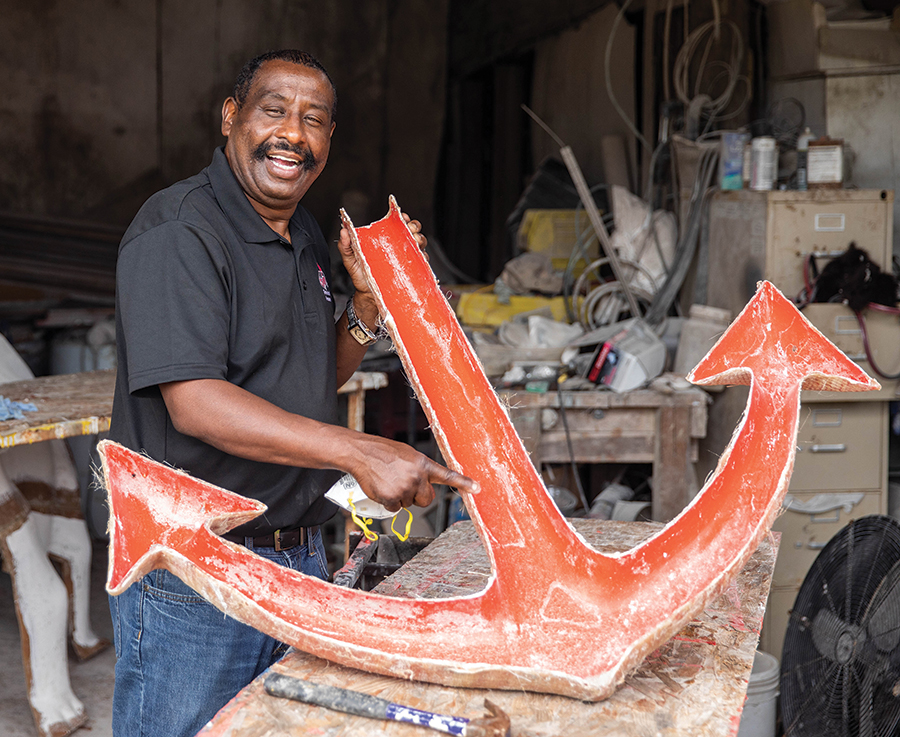 It began with one lighthouse 25 years ago. Back then, Graham worked for the power company, and came home one day to find his front door kicked in and some belongings gone. The house was surrounded by woods then, hidden from the highway, so Graham cleared the land and, with the help of two friends, welded together a metal lighthouse with a security light on top. Pretty soon all his neighbors wanted one, too, but a hailstorm two years later left the original badly dented and sent Graham in search of a more durable material. He found a man named Bill Sharp, who built lighthouses from fiberglass up in Rocky Mount. Sharp was a roamer, far more interested in chasing women than in building lighthouses, but he taught Graham to “glass” and ended up selling him his molds when he retired.

Graham eventually left the power company and got a job at Southport Boat Works, building fishing boats and further developing his fluency with fiberglass. When that company went under they offered him the contents of their warehouse for one dollar, on the condition that he clear it out in 40 days. So he hired some former co-workers to help, and ended up with 200,000 gallons of resin and 300,000 pounds of fiberglass — the raw materials for Grahamland.

Fiberglass resin has a shelf life. The next few months were a frenzy of activity for Graham, building as much as he could before his resin kicked off. Every afternoon he would wax and gel the molds for whatever he was building (his sculptures are pieced together from molds, which he makes — half horse heads, sides of cows, legs for bulldogs), and in the morning his hired help would come in and roll the glass while he went to work at Corning. That afternoon, once it had cured, he would pop out all the pieces and do it all over again. After a year, he had used up all the resin, and had a yard full of fiberglass puzzle pieces of sculptures, waiting for assembly. 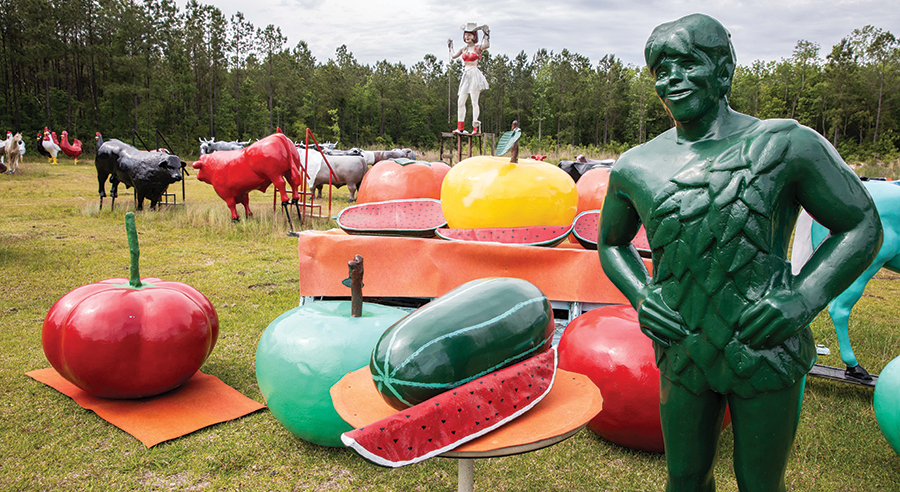 To build a horse takes seven days. Graham never works on one thing at a time; while he’s putting a horse together, he might be making horns for a bull or fins for a dolphin, too. His work shed has benches full of petrified paintbrushes, scraps of glass and angle grinders; rolls of fiberglass cloth and 55-gallon drums of resin line the walls. Everything is covered in fine itchy white dust, and the chemical-sweet smell of uncured resin, like some strange synthetic fruit gone far too ripe, hangs in the air. The floor is a textured mosaic of hardened resin drops, splattered with paint and glitter. Here is where the Frankenstein-like job of assembling the jumble of molded parts into a recognizable creature takes place. The seams are glassed from the inside to hide them, which means Graham must contortion himself up inside each dusty, hot, cramped animal and smooth on layers of glass and pungent resin. The stomach goes on last

Once the glass has cured, the real work begins: sanding. The ancient Greek Gods may well have punished Sisyphus by giving him a sander and some fiberglass instead of a boulder to roll up a hill; the work is loud and endless, and the dust is like itching powder that gets everywhere. Graham estimates it takes him 18 to 20 hours to sand smooth just one horse, during which time he wears through 30 discs of sandpaper. Amazingly, he works in short sleeves. “I’ll get too hot otherwise,” he says. “The less you sweat, the better off you are.” Then comes the paint, and the end result is something that will outlast almost anything else people can create. Wood may rot and metal may rust, but fiberglass is forever. 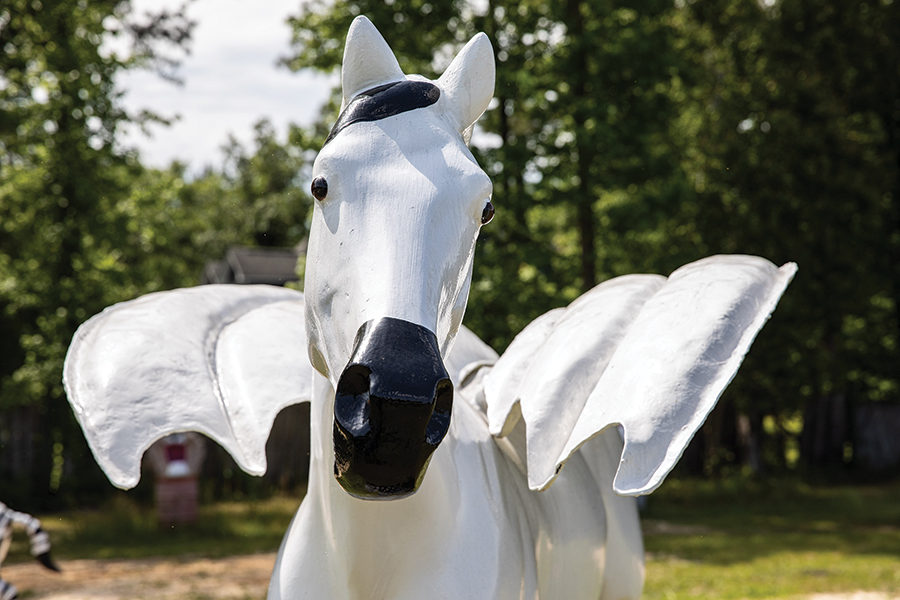 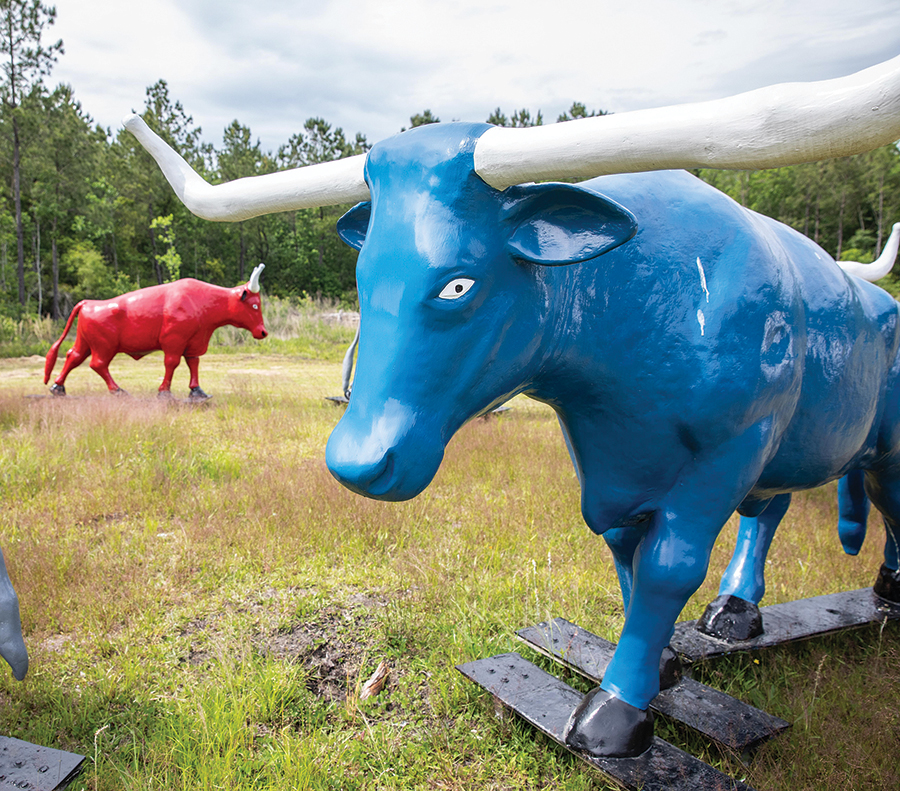 Like all artists, Graham is a dreamer, and had big plans for Grahamland. He envisioned a theme park where people could come to escape everyday life, complete with a mini-golf course (where people could putt-putt into giant fiberglass animal heads, naturally) and a restaurant topped by one of his signature giant lighthouses. Then Hurricane Florence came swirling up from the sea, and Grahamland was completely underwater. Animated by the furious flood, the sculptures scattered into the surrounding woods, some making it a half-mile away. Seven-foot-tall pink flamingos floated past grizzly bears treading water; a fleet of fiberglass hot dogs sailed on the storm-tossed waves. The Big Uniroyal Gal lost most of her clothing to the jealous fingers of the wind (fear not — she’s decent again). When the waters receded, Graham hopped in his tractor and shepherded his animals back home, but there is still a bathtub ring halfway up the side of his house.

Then the coronavirus came, and Grahamland’s gates closed again. He found himself, as many of us did during the quarantine, with more time on his hands than he’d ever had before, and found himself enjoying it. He finally has time to spend with his girlfriend. Before, he admits, their relationship suffered: “I wasn’t paying her any more attention than the man in the moon. I was too busy doing fiberglass stuff.” 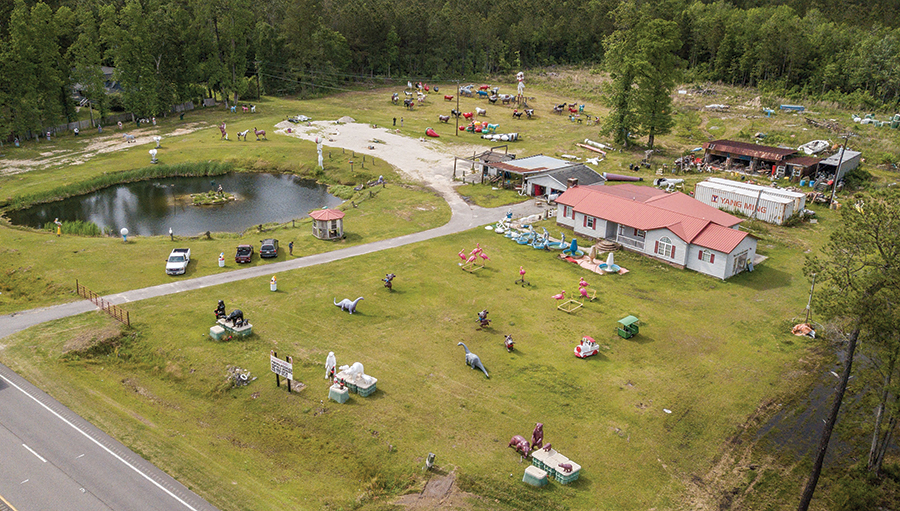 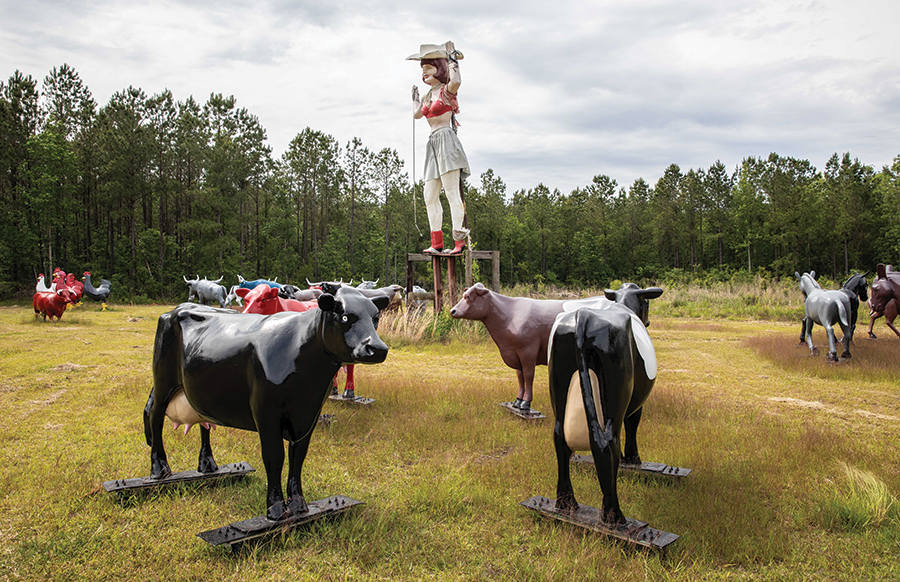 But the recent death of his father put things in perspective for him. His father worked all his life, putting in 39 years with International Paper, acquiring a big house filled with things, but in the end, Graham says, he never got to enjoy it. “It’s so sad. You work all your life, you gain all this material stuff, and what do you got? When you die, all that stuff stays here . . . At the end of your life, were you happy? Happiness means more than anything else. Happiness, together with someone to share your life with, that means more than anything in this whole wide world.”

Three disasters in a row have left him burned out, and Graham is pushing 60. A quarter-century of hard work hasn’t gotten easier with age, and with no apprentice who could continue it, he’s not sure what the future holds for Grahamland. But he’s created something unique, something remarkable. Something durable enough to survive storms and plagues. Something that makes people smile when they drive past. Maybe that’s enough.

Will he build more? Graham chuckles. “I don’t know if I want to be up in another bull’s ass or not.”  PS

John Wolfe enjoys life as a writer and mariner on the North Carolina coast. More of his work can be found online at www.thewriterjohnwolfe.com. 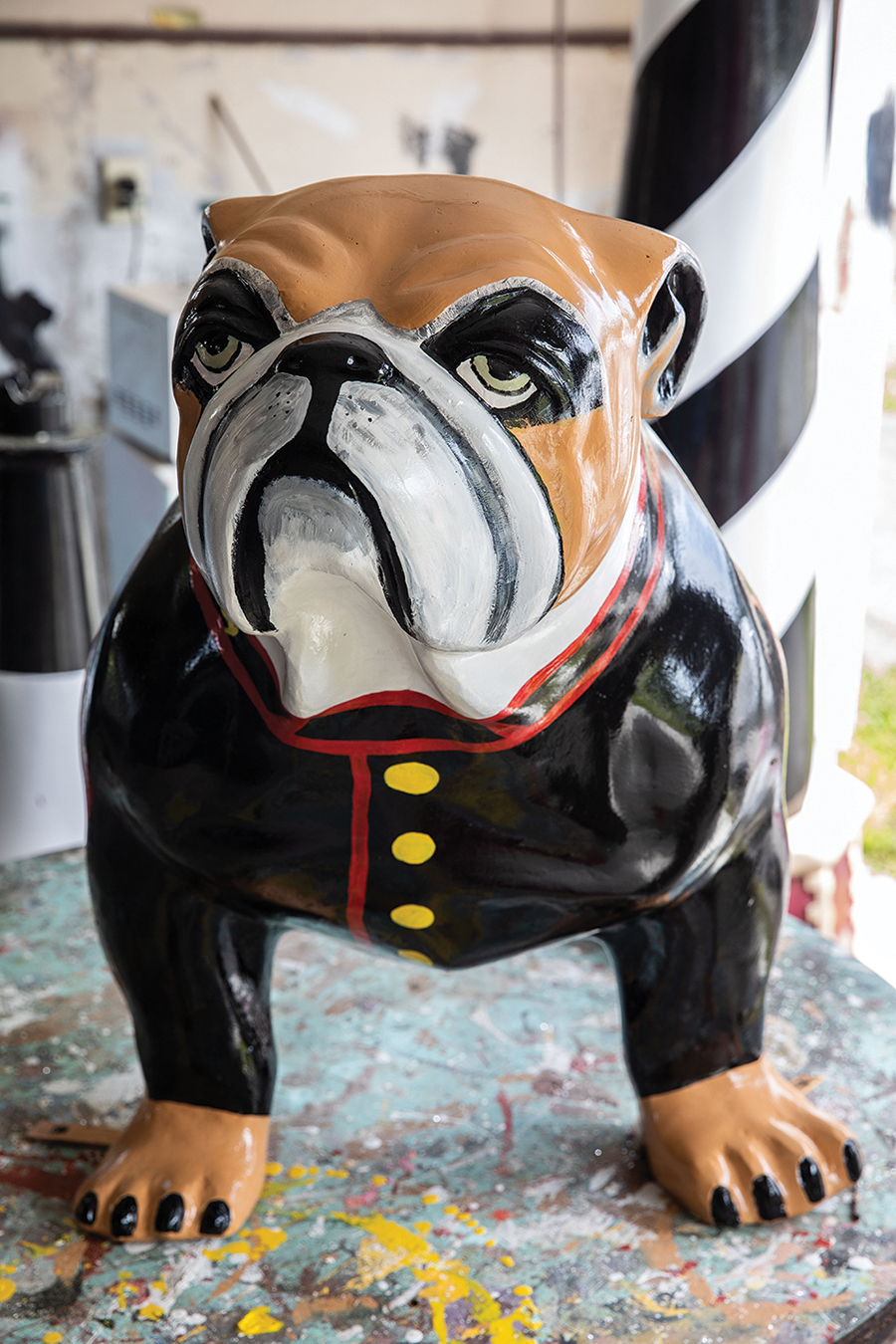