Of Palettes and Perps

From landscapes to wanted posters

Walk up a narrow flight of stairs and hang a left into the corner studio above Eye Candy Gallery & Framing in downtown Southern Pines and you’ll find Pat McBride. Wearing a crisp white shirt that — if you know any artist — has obviously not yet seen the business end of a paint brush, she waves and introduces herself with an upbeat hello. She’s surrounded by a dozen paintings, ranging in size from a few inches to a few feet.

“I always liked art, but I hadn’t really thought of being an ‘artist-artist,’” she says. That was until she refused to take no for an answer in a class at Indiana University of Pennsylvania.

“I took art as one of my electives and, on the first day of class, the professor said, ‘OK, if there’s anybody in here with any other majors, this is a class for art majors. You just need to let me know and get out now.’”

She backtracks. “Well . . . first, he said to put up your hand. Of course, I, being ornery, did not, but everybody else did and politely marched out . . . you’re not kicking me out of this class.” She relives the memory, shrugs her shoulders, smiles. “Anyway, I took the class and ended up becoming an art major.” She got her undergraduate degree in fine art and has been at it ever since.

McBride points at her large painting of the Carolina Hotel. “Right now, I’m working in oils.” She used to work mostly in acrylics and pencils, detailing people. But a class in oil painting inspired her to take up the medium, and the historical architecture and unique sporting events of the Sandhills have captured her imagination. “Everything is kind of fun because everything is kind of . . . new,” she says, though she and her husband, Larry, moved to the area over three years ago. “When we moved here, our house needed so much work that we didn’t really get to do a lot.”

Before coming to the Sandhills, McBride and her family lived in Greensboro for 15 years and, before that, they lived in a half-dozen other places, including Buffalo, New York, and Annapolis, Maryland. Larry worked as a special agent for the FBI, so the family was packed up and moving every two years. At least, that’s how it was at the beginning.

McBride kept up with her art regardless of where they lived. “I was working in frame shops so that I could be around art and afford to get my stuff framed.” She showed her artwork in galleries and continues to do that in Eye Candy just below her studio and It’s Art for Art Sake in Pinehurst.

In the spring of 1984, however, McBride’s most prolific work hung not in a gallery but in post offices and malls across the United States. It was the wanted poster of Christopher Bernard Wilder, better known by the epithet the Beauty Queen Killer. 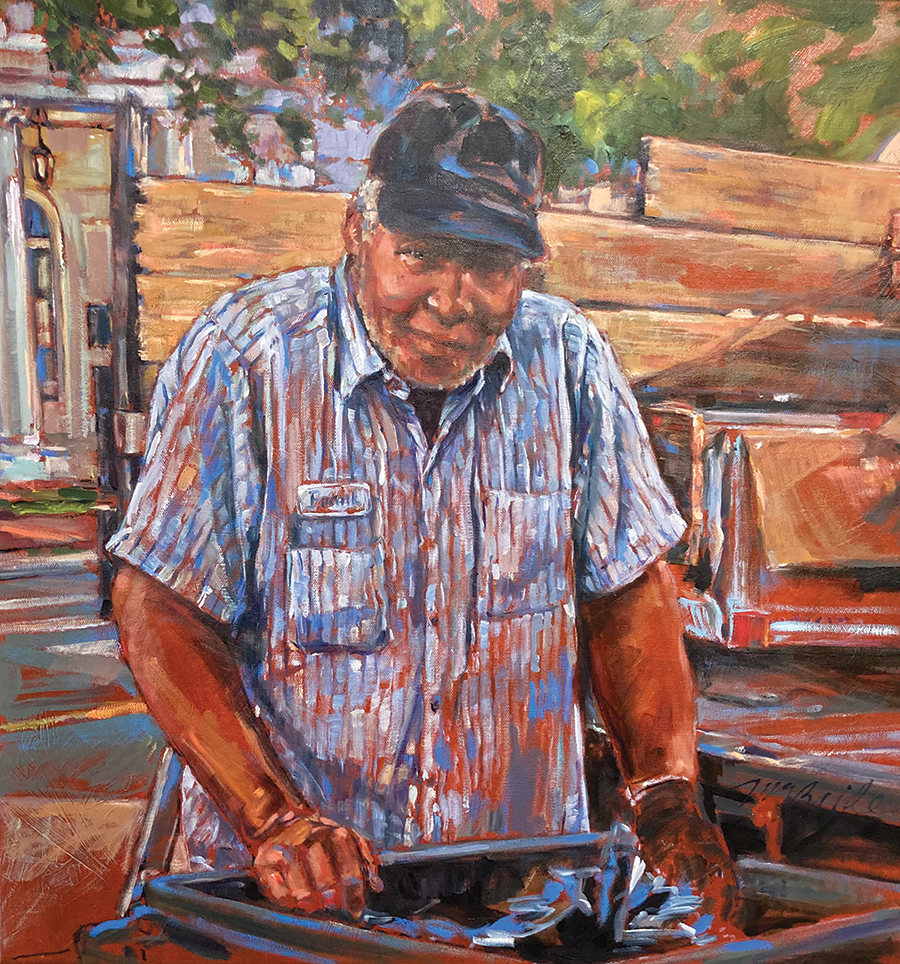 It was McBride’s husband who, in the early 1980s, recommended she apply for an opening as an illustrator in the special projects division of the FBI. She geared her portfolio toward the job and got the position. “There were craftsmen who were woodworkers; there were photographers; there were graphic artists,” she says. “The craftsmen would create, like, a golf club that had a microphone in it. Of course, the photographers were photographing different things and crime scenes — stuff for courtroom presentations. And the graphic artists were for in-house publications.

“I did illustration,” she continues, “and they also trained me to do photo retouching.” In the pre-Photoshop days, McBride retouched photos by hand with what looks like a single- or double-haired paint brush, opaque watercolors (gouache) and her imagination. She reworked photos of at-large criminals, imagining potential changes in their appearance for wanted posters.

“It was just what I thought they might look like,” she says. “There wasn’t really a lot of science to it.

“When they brought this one to me, it was going to be a standard poster . . . dah, dah, dah. But then, they’re bringing in photos of all these beautiful young girls. And every day they’re bringing them in, and they’re preparing for a press conference. They’d go marching past my desk with these giant photos.”

The Australian-born serial killer lived in Florida and had a dark past rife with sexual assault and rape allegations. But he was also a successful real estate investor who drove race cars and lived fast. Wilder would lure away unsuspecting teenage girls and young women by hanging around malls, pretending to be a photographer looking for young models. “For whatever reason, probably because he was successful, probably because he didn’t look the part of a monster, he got away with it,” she says.

In the spring of 1984 Wilder went on a cross-country killing spree and murdered at least eight women. He catapulted to the top of America’s most wanted list and, ultimately, shot and killed himself on April 13 when two police officers approached him at a gas station just miles from the Canadian border in New Hampshire.

“Apparently, he usually had a beard and a mustache,” McBride remembers, “but he was on this crazy spree, and they heard word he might have shaved — nobody had a photo of what he looked like prior to a beard.”

It was her task to overpaint the serial killer’s photo and reimagine him without a beard. “At the time, I thought, ‘Man, if I never do anything again, this was probably the most important thing I ever did,’” she says. “He actually was clean-shaven when he died, but I never saw pictures. I asked the agents afterward how close I came, but there’s no way I could really know.”

McBride Googled Wilder nearly 40 years post mortem and discovered an Australian TV special that flashed previously unseen photos of the killer clean-shaven. “I went ekkkkk!” she said, in a mixture of accomplishment and disgust, “because it came out looking correct.”  PS

Jenna Biter is a writer, entrepreneur and military wife in the Sandhills. She can be reached at jenna.biter@gmail.com.