The artisan of Aberdeen

“I’m more of a Japanese maple freak than a bonsai freak, but I can show you,” Joe Marotta says matter-of-factly but somehow merrily, too. He walks through the kitchen and opens the door to the backyard. Trees, 20 or 30, and plants line a bricked walkway, each in a pot of specific size and color, and some with accompanying stands.

“Do you make these?” I motion at the wooden stands.

“Yup,” he says with a grin. Japanese maples of assorted cultivars fill a majority of the pots, and beyond they fill the backyard. Bihou has yellow bark; Shirazz has salmon pink leaves; Radiant has iridescent bark and, when it matures, it will have iridescent leaves, too. “I have about 55 Japanese maples on the property,” he says. Hanna Matoi, a weeping cultivar, is his favorite. 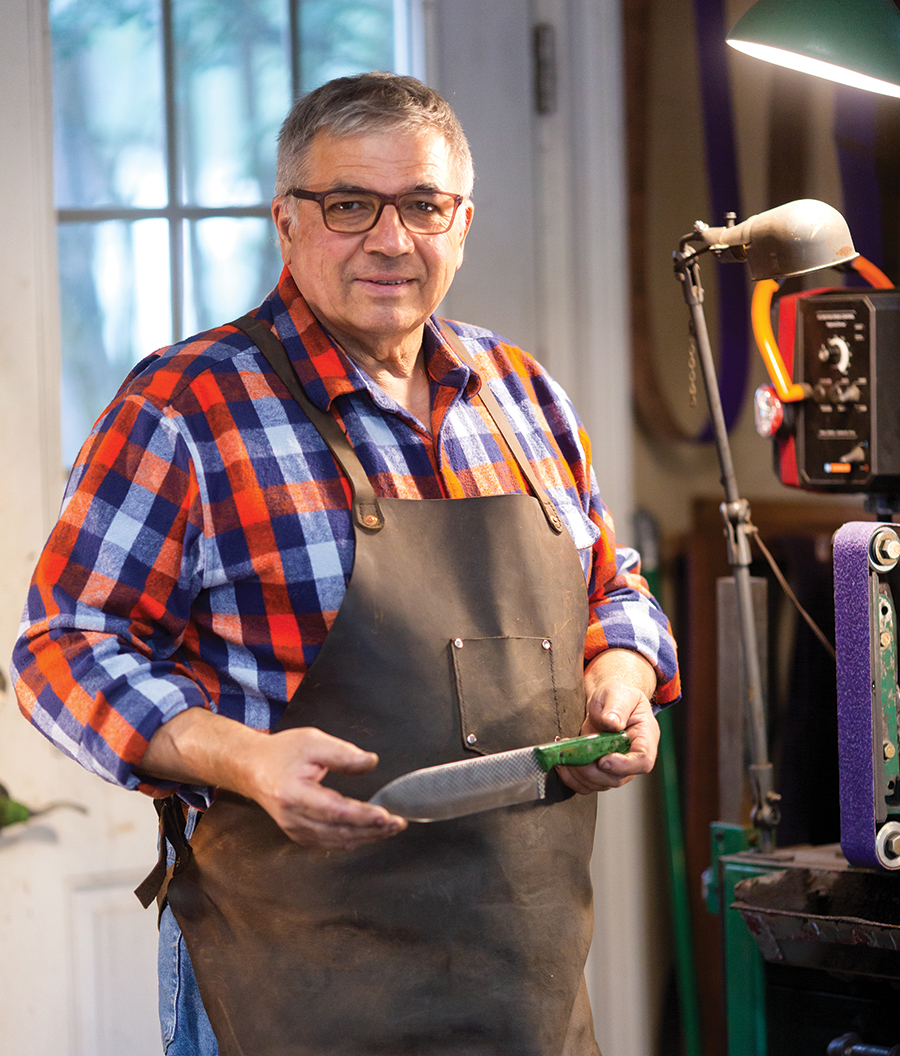 The bonsai are the first stop and, ultimately, the last one on our circular tour of the backyard. A pergola covered in greenery, a wooden swing and raised garden beds planted with tomatoes, onions and eggplant absorb the space between the trees. With his back toward me, he fiddles with a bonsai before heading toward the garage.

“You could just take a small tree or plant and put it in a pot and then it’s a tree in a pot,” he says. “But, if you start trimming them and trying to shape them — that’s the art of bonsai.” He turns, catches my eye and laughs a round laugh. “I’m new to that, too.”

Too. He’s alluding to his other craft, knife making, a skill he’s been honing about as long as he’s been pruning bonsai. In his garage, Joe stands over 26 knives-to-be. It’s where our conversation started nearly an hour ago.

“I was born and raised on a horse farm in Michigan, and we had racehorses,” he says, standing at a worktable in this garage-turned-workshop. With a state-of-the-art table saw, planer, anvil and the works living comfortably in the spaces meant for Fords and Chevys, it probably hasn’t been a garage for some time. 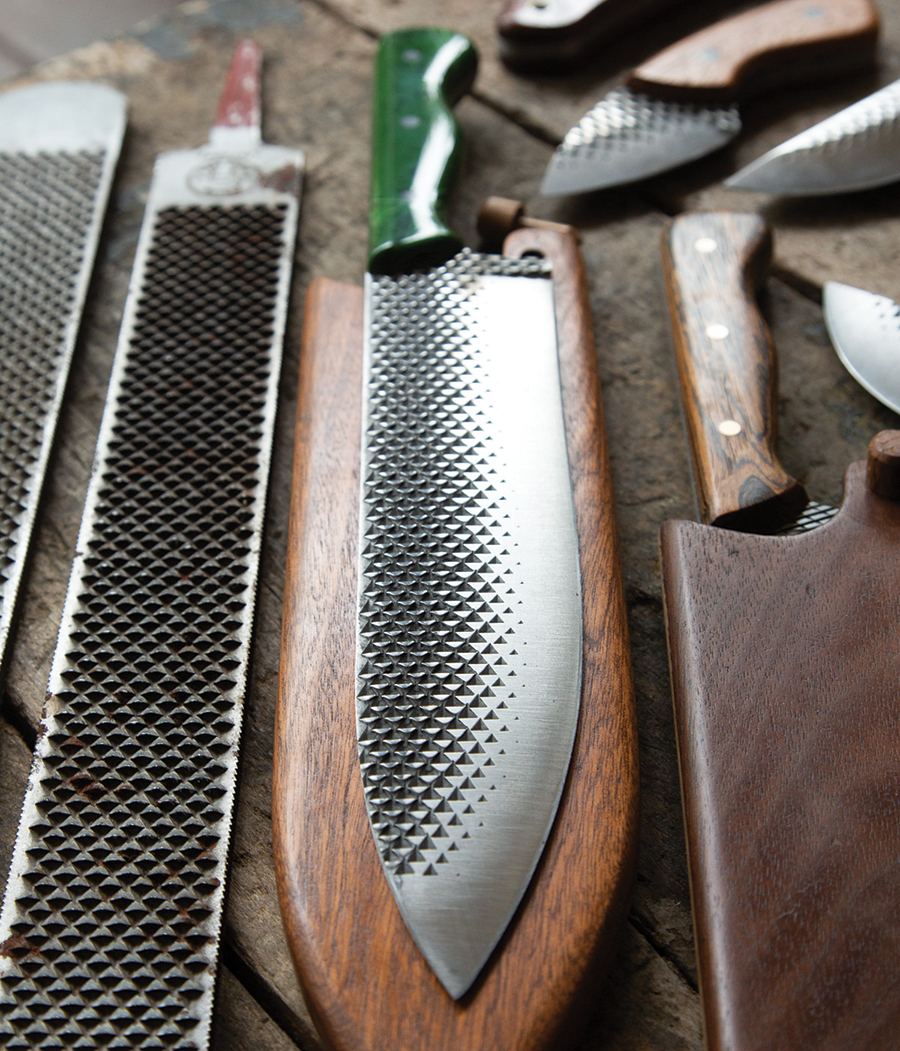 “The other family business, it was a construction business,” he says. “I went the racehorse route, and I became a horseshoer.” For 35 years, two in the Sandhills, he shod horses, before trying his hand at construction, trimming houses for his cousin.

“And, there was a piece of molding or something I put up, and I said, ‘This just doesn’t look good to me; it doesn’t look right.’” His cousin told him to do whatever he needed to do to make it look right. It’s the mantra he’s carried through to the art of bonsai, blacksmithing, woodworking and the nexus of the latter two, knife-making. The warmth of his voice advertises the delight that comes from the discipline of mastery, the joy of knowledge.

“Do you want to hear the rest of the story?” he asks. “In 2017, I was diagnosed with lymphoma, and, halfway through my treatments, they discovered I had kidney cancer.” He pauses. “In January of the next year, after I got my chemo treatments for lymphoma, and I had a good prognosis, they took my right kidney out. Then, after that, they said, ‘As of right now, you’re cancer-free,’ and so far I have been.”

Joe shrugs. “Well, in the meantime, I didn’t have any business, and I wasn’t feeling good enough to do anything, so I decided I would start making knives from horseshoe rasps.” 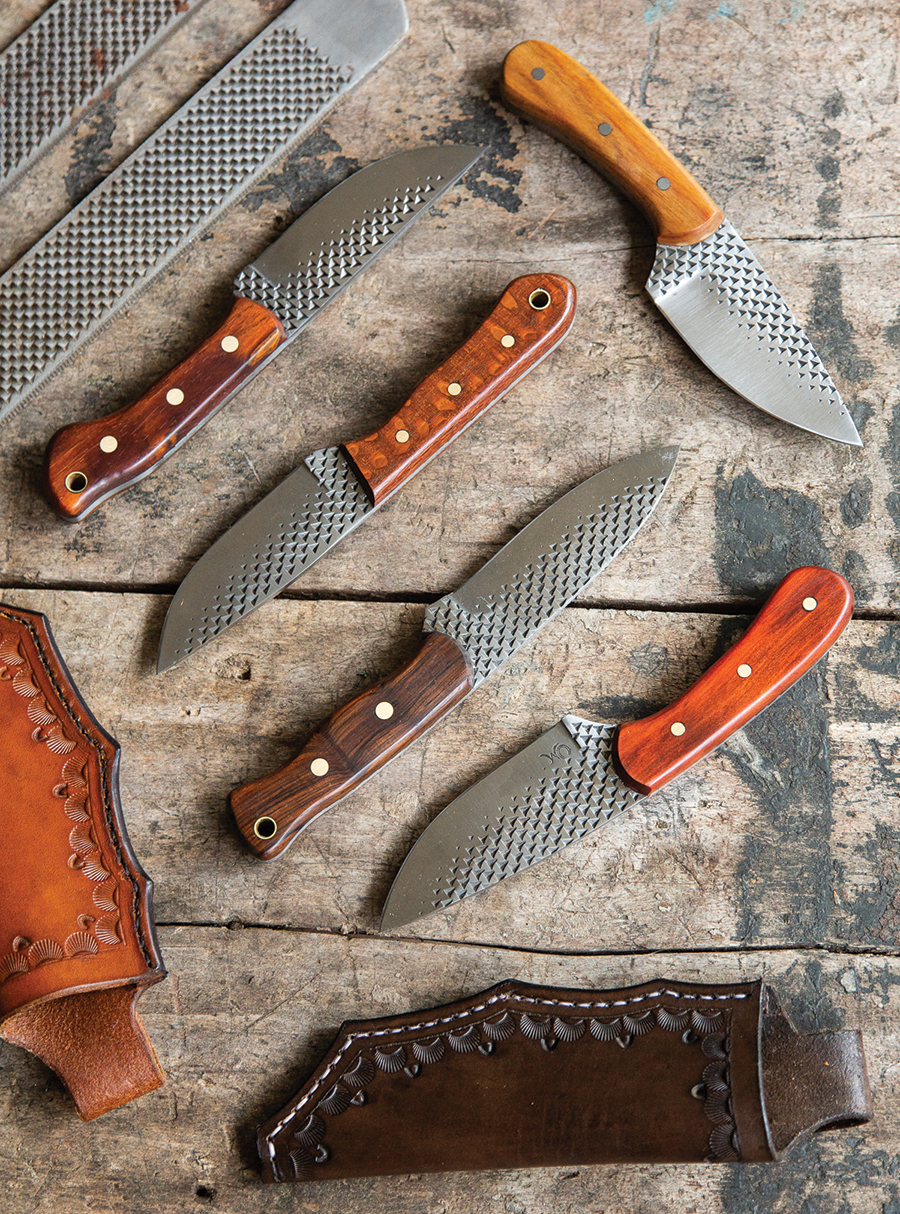 He holds up a large, metal file. “This is called a big foot,” he says, waving the farrier rasp. “Normally, they’re about 14- to-16 inches. ’Bout halfway through my shoeing career, I switched to these because you get more leverage. Less stress. You don’t work as hard.”

He imitates the filing of a horseshoe in midair. “What I do is I’ll lay them out like this,” he says, setting down the repurposed rasp before grabbing a template to demonstrate how he cuts out the knives. “Because this is so coarse and sharp,” Joe says as he lightly runs his fingers over the nubs on the file, “I knock down the rasp bed.”

Then comes the shaping of the knife on a homemade grinder. Not only does he make the knives, he makes the machinery to make the knives. He flicks on a switch. “You sit there and grind and grind and grind,” he booms over the mechanical humming. Chhhhh, chhhhh, chhhhh . . . the metal and the grinder’s belt meet in a spray of sparks. “Dunk it in water in case it gets hot,” he says and plunges the knife into a bucket.

“The trickiest part is getting the bevel right. When you look down at the knife, you want the taper to be symmetrical,” he says. “After you grind about a hundred knives you get pretty good at it.” He adds modestly, “I’m still not great at it.”

The process courses ahead in almost perpetual motion. Handles-in-progress lay out in a variety of colorful, unfamiliar woods. “I try to use all exotic hardwoods. This is bocote, this is wenge. This is also bocote, but it’s long grain . . . redheart . . . leopardwood,” he lists off the names as he points. 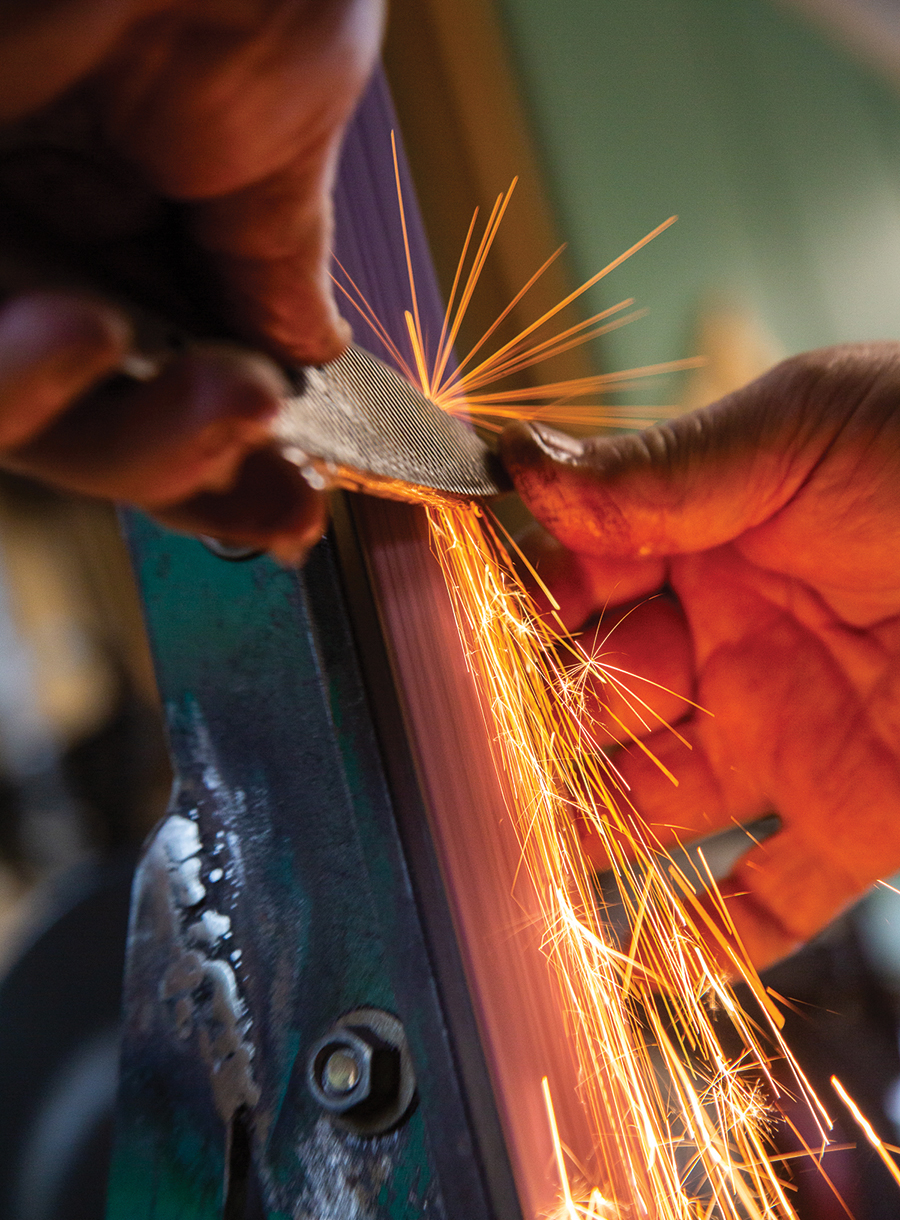 Even the garage-turned-workshop doesn’t have the space for a production line that includes making leather or wooden sheaths — the latter called sayas — to accompany his cutlery, so the process spills into the house. His wife, Cheryl, says, “He wants my sewing room, but he’s not getting it.”

Joe pretends to ignore her but can’t contain a smirk as he explains how he makes the sheaths. “I cut a template out. Stain it and stamp it,” he says, cruising through the process. “Sew this, then put a welt in there, and, now, I just got to sew that together, stain it, finish it and then that’s the sheath.” He walks over to his homemade saddle pony to demonstrate saddle stitching.

Knife-making, machining, leather-making. “How do you have time for all these hobbies?” I ask.

“Ever since I got sick, and I had cancer, all I got is time,” Joe says. For the discipline of mastery, for the joy of knowledge.

“He also does bonsai,” someone chirps from the corner of the room.

“I’m more of a Japanese maple freak than a bonsai freak, but I can show you,” he says matter-of-factly, but somehow merrily, too.  PS

Jenna Biter is a fashion designer, entrepreneur and military wife in the Sandhills. She can be reached at jenna.biter@gmail.com. Marotta Custom Knives are available online at www.marottaknives.com.