By Will Harris   •   Photography by Tim Sayer

In the basement of the Cabin Branch Tack Shop, down a set of creaky wooden steps, the musky smell of leather mixes with the lingering odor of sweet cigar smoke where James Alford practices his leatherworking craft. A radio plays rhythm and blues as he repairs horse tack and saddlery using tools and methods that haven’t changed in generations.

Speaking through a Swisher Sweet cigar that has long since gone out, Alford recalls the relationship that led to his 50-plus-year career keeping the indispensible gear of an equestrian stronghold in good working order. “I got lucky because a gentleman I knew in town was a taxi driver, and I used to do a little work for him,” he says. “You know, the kind of guy who knows a lot of people. And he liked what I did so he looked out for me for a job. That’s how I got in and met Mr. Schmelzer.”

E.J. Schmelzer hired 14-year-old James as an apprentice at the Schmelzer family leather shop serving the Pinehurst Harness Track. “Just starting out it was a part-time job after school and on weekends. I got away from the tobacco field. You remember those days.” He could have gone to the Stanley Furniture plant, where his father worked for 38 years, but “that wasn’t my thing,” he says. “I got to the tack shop, and that was it. I thought: ‘Oh, this is where I need to be.’”

After 12 years at the Schmelzers’, it was time to move on. Alford began working at the tack shop in Southern Pines in 1980 when the business was part-owned by Sam Bozick. “I knew they needed help and I came straight over and started working. No changes or nothing. I worked for Sam for over 25 years.” 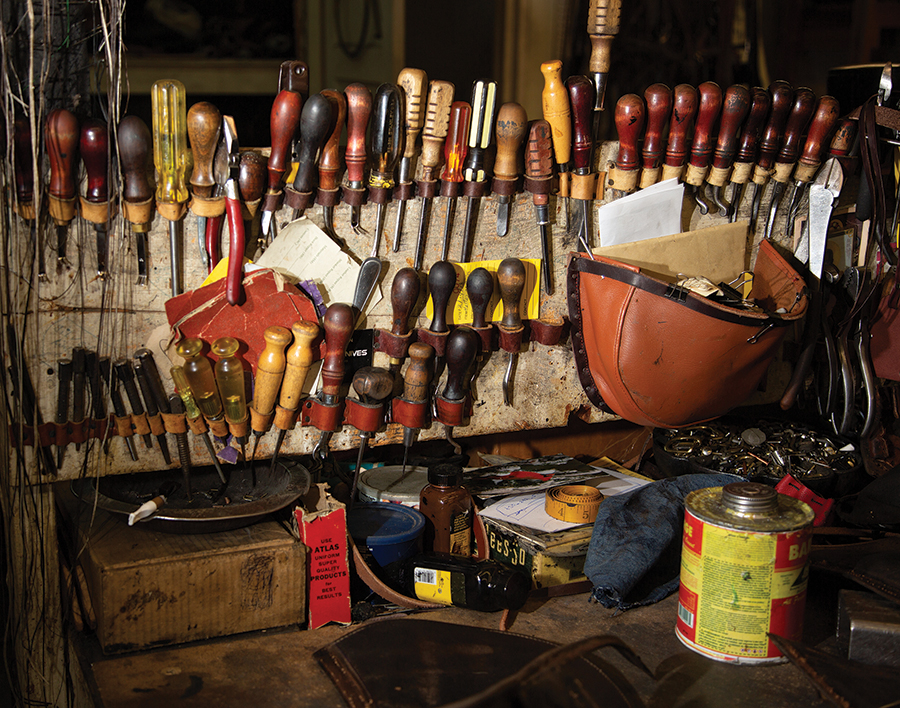 Bozick, known for his affability and generosity, would sometimes fix tack for people even when they didn’t have the money to pay him. He knew they would settle up when they could. “A handshake meant a lot back then. It was just like signing a contract, when you buy a property or a car,” Alford says. “He would let them have it and gave them time to pay for it and wouldn’t push them about it. And kept going with a smile.”

Alford and Bozick spent time traveling up and down the East Coast. “Sam would go all over the country and pick up tack work or buy leather. I used to ride with him a lot of the time, and we’d turn in somewhere way back in the woods, old big farms. People he didn’t know. He’d pull into the farm and get to talking to them. And that’s the way he built business.”

Bozick passed away in 2010, but Alford continues the legacy with the comfortable confidence of an expert who has seen it all. Surrounded by mounds of unfinished boots and harnesses stacked on his workbench, he exudes an infectious calm. “Take your time, have patience, and it will all fall right into place. I say all the time, ‘Oh, I shouldn’t have taken this job here.’ And then I’ll sit there and think to myself, ‘What I’m going to do?’ and I can picture in my mind how I want it to look when I get done.” 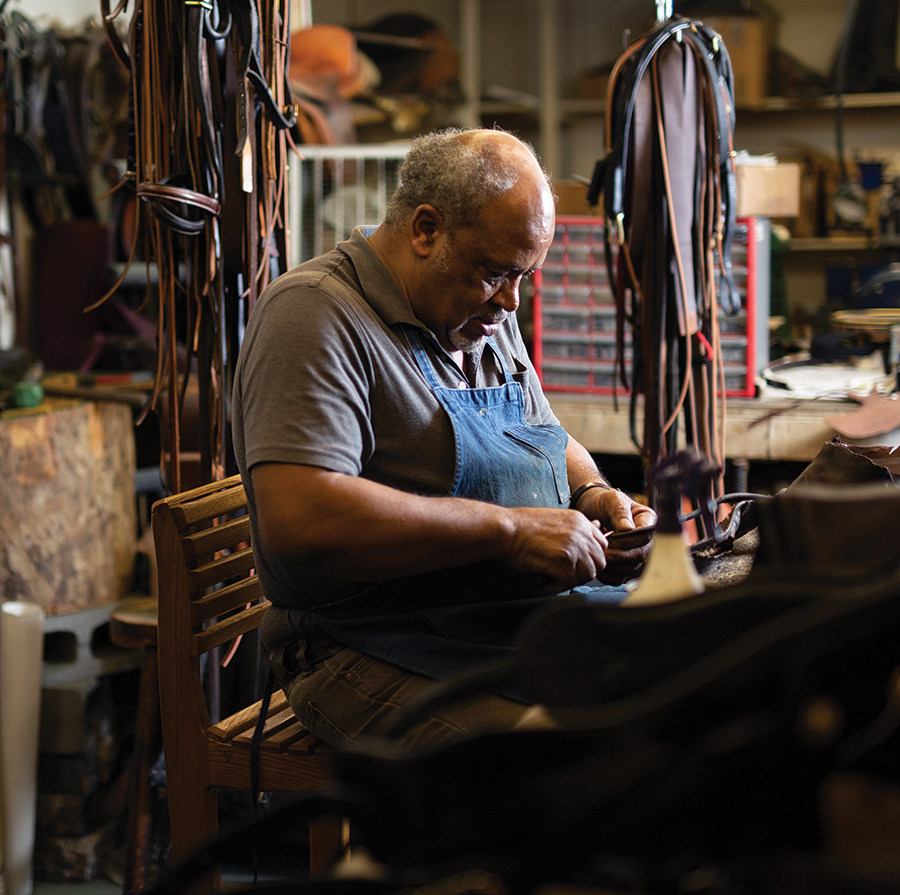 The day is punctuated by regular visits from his customers, announced by the banging of the half-door that still bears Bozick’s name at the top of the stairs and the thump of riding boots descending to the workshop. He particularly enjoys the challenge of an unorthodox job. “I like everything about it. Sometimes I’ll get here and I’ll groan to myself: ‘Oh, this bunch of junk.’ And then I look at it and think, ‘I know how I can fix this.’ But you’ve got to do it right, because they’re gonna use it.”

Some customers pick up finished bags, boots and bridles. Others just need a quick fix that Alford does while they wait and watch. He can put his hands on a customer’s repaired item within seconds, even if it looks more like a pile of random stuff to the casual visitor.

On a busy afternoon, the door slams and a rider walks down the stairs, boots turned sideways to avoid snagging her spurs on the carpeted steps. She’s picking up a saddle Alford has altered to keep it from digging into her horse’s back. “You know when the saddles are old and the horses grow, their back changes and everything. A lot of times you can correct the problem. Stuff it with padding and so forth. But that’s the way it goes.”

She asks how much she owes, but Alford sends her off without paying. He expects the saddle may be back for further tweaks until it is perfect for the horse and rider.

Later in the day another rider comes in. The hackamore bridle her horse is fond of using has a problem — when she pulls the reins, it slips in front of the horse’s eyes. She has attached two pieces of bailing twine as makeshift straps to keep the bridle centered on the horse’s face, what Alford calls a “backwoods” fix.

She plans to compete with the horse at the end of the month, and while the bailing twine works, it may detract from the pair’s performance. Relishing the opportunity to make something from scratch, Alford intends to copy the customer’s design in leather, adding buckles so the straps can be adjusted. “I’m looking forward to this, because I’ve got to make it,” he says.

Alford’s favorite project is rebuilding saddles. An older gentleman from Laurinburg brought in a Western-style saddle from his childhood that he wanted Alford to rebuild just so he could display it in his home. He said the saddle would never be used again, but Alford knew better.

“I have done some saddles like that; they say they’re going to put them up as a showpiece, and they will end up riding them,” he says. “So, I fix them the same, just in case. I put everything just like they were roping steers and on the trail riding for months at a time.

“You do it right, because you never know. Who knows, someday his granddaughter might grab that saddle. Now, they can just throw it on a horse and take off and ride,” he says, with a smile.  PS

Will Harris is serving an internship at PineStraw to complete his business journalism undergraduate degree from the University of North Carolina at Chapel Hill. He works locally as a carpenter, enjoys playing tennis, sailing and spending time with his dog Bear.