Surprises await inside a timeless exterior

If ever a house made beautiful music that house must be Stone Oaks Farm:

— The lilting remnants of an Irish brogue, from flame-haired Mary Dunlop, who chose crystal chandeliers for her kitchen.

— A duet of aboriginal art collectors.

— The echoes of grandchildren on summer vacation.

— The patriotic anthems of Craig and Mary’s mother countries.

— The purr of a foundling kitten who transitioned from barn to master bedroom.

— Everywhere, any time, music of many sorts from an indoor-outdoor sound system. Right now, country tunes top the playlist. “They make me feel like dancing,” Mary says. So Mary and Craig hopped over to Nashville — and danced.

— Should the house itself find a voice, only a bold, booming baritone would permeate 6,000 square feet on six acres, with terrace, pasture and barn. Because only bold folks would purchase a modest cottage and attach a 4,000-square-foot, three-story addition walled with 350,000 pounds of Tennessee fieldstone laid by a family of masons from Troy. That endeavor alone, crowned by a Celtic knot, took a year. The result deserves a  historic places marker. As for time and expense, Craig has no regrets. “There’s nothing as timeless and classic as stone.” 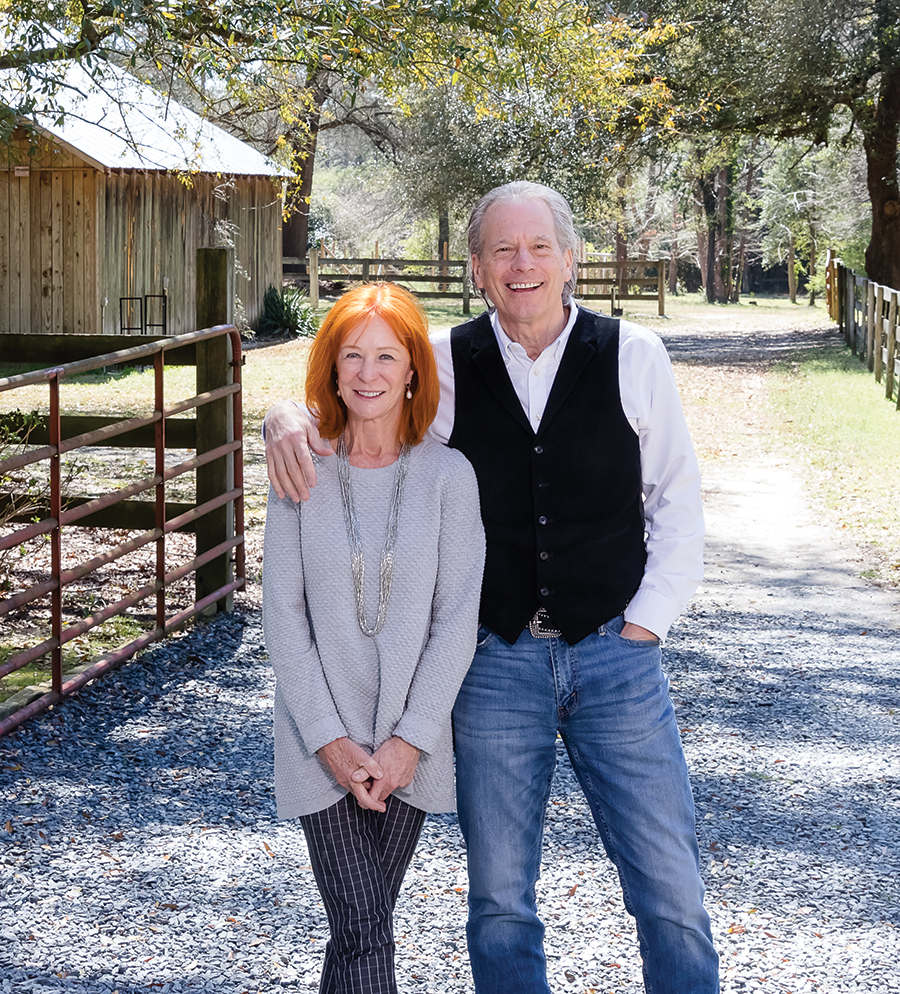 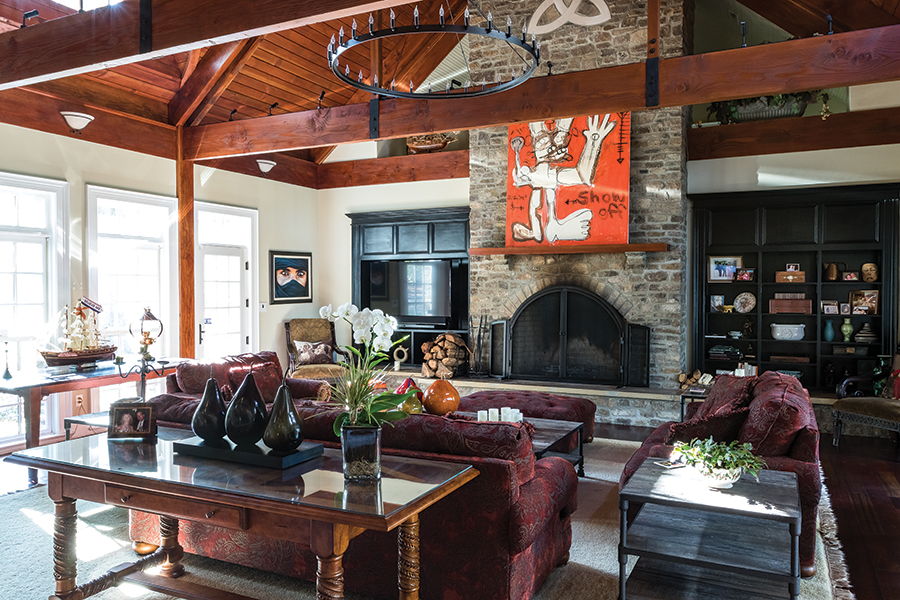 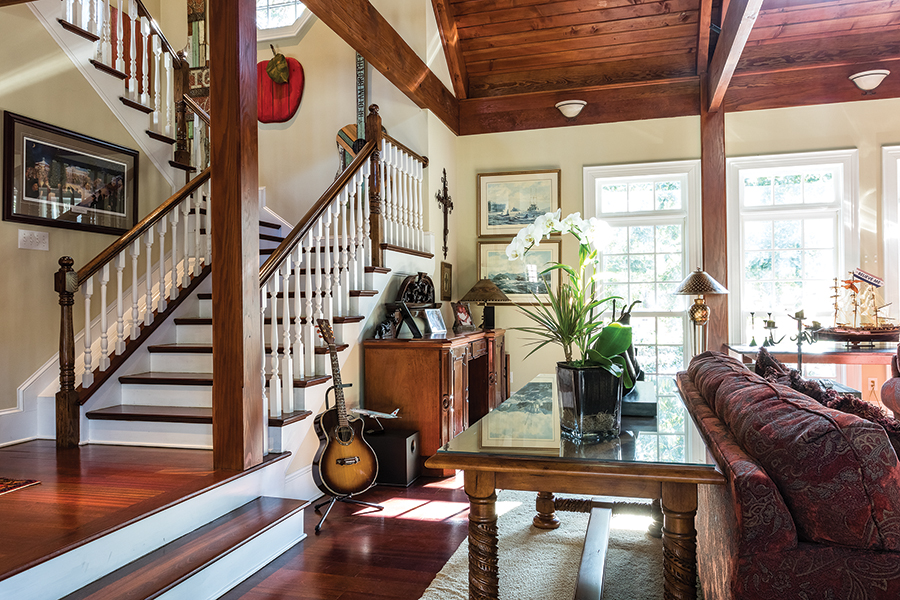 “We’ve been coming to Pinehurst for years,” Mary begins. Both are serious golfers. They kept a small house, sufficient for getaways. Then, out for a drive one fine day in 2004 they came upon the cottage, built in 1929, tucked behind massive pin oaks on Midland Road. They bought it immediately with the intention of creating a family homestead that looked the part. Never mind they were living in Milan, with an apartment in Paris. Previous addresses have included Toronto, Vancouver and Edmonton. After cruel Alberta winters, Pinehurst was paradise.

“Until now, I’ve never lived in one place for more than six years,” Mary says.

Another two years passed before they occupied Stone Oaks. By then, a cottage of unknown provenance had become the core from which a new residence radiated.

First-timers on a walkthrough had better leave a trail of breadcrumbs or arm their GPS. The floor plan is complicated.

Mary starts in the kitchen, accessed by a long outdoor gallery (don’t trip over the rocking chairs) leading to the three-car garage over which hang American, Canadian and Irish flags beneath a Celtic knot. According to a commemorative pillow, the couple became American citizens on Oct. 28, 2016. “I love kitchens but I hate to cook,” says Mary. She pored over magazines until finding the right design: two islands, one granite-topped for the sink and breakfast bar, the other with a chopping surface of polished African Iroko wood.  Above the range, a backsplash of Irish Connemara marble. Dark beams match the cabinets, some stained black. A double-wide stainless fridge, a desk and combination pantry-coat closet, bar and butler’s pantry, two dishwashers and numerous ovens facilitate entertaining. 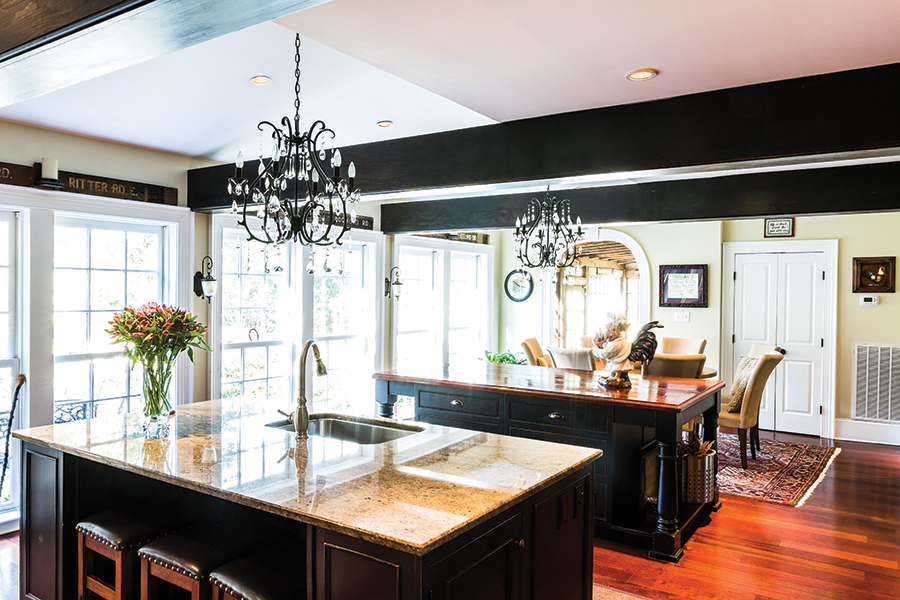 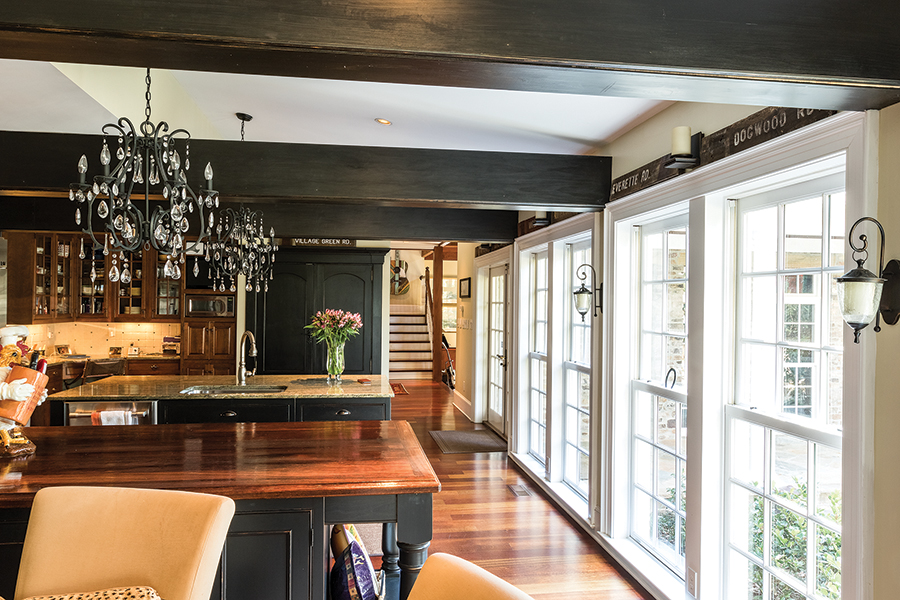 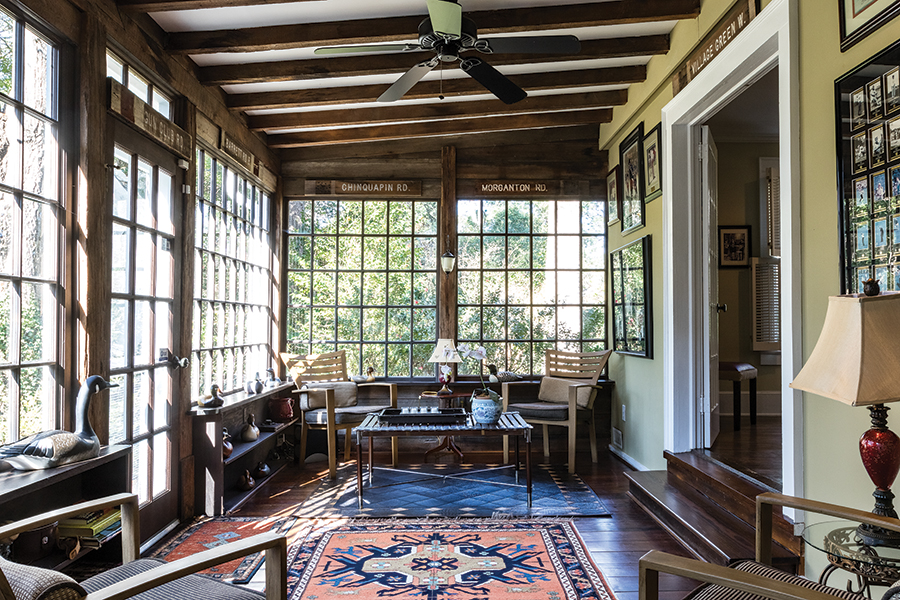 Mary couldn’t decide on lighting fixtures until the crystal chandeliers caught her eye at Pottery Barn. She likes “quirky,” best illustrated by original wooden street signs from Pinehurst, which she found at the dump. Now, they border the ceiling in kitchen and sunroom.

“This was the living room,” Mary says of her dining room long enough to accommodate a 12-foot table of stained wood planks on a central support, “so nobody gets their legs tangled up underneath.” On the walls, Canadian paintings of startling form and color; some appear lifted from Stravinsky’s The Firebird ballet, others from an anthropology textbook. Across from the dining room what had been a tiny bedroom now serves as a petite parlor with white damask-upholstered pieces, pale avocado walls and rug plus a second quirk: artsy photos of cigar smokers’ heads, old and wizened. “We saw them in a Paris restaurant . . . the owner told us where to find (the photographer),” Mary recalls. On the mantel facing the smokers stands a delicate antique clock belonging to Mary’s mother — or a French king.

Photographs, hundreds, hang everywhere. Besides chronicling family history on all four walls of a powder room, they commemorate athletic and professional achievements. One corner is devoted to musicians — Elvis, The Beatles and, as a joke, Justin Bieber. The sunroom features a Tiger Woods retrospective and more hockey.

If the parlor looks seldom-used, not so Mary’s “place,” a clubby den with wood paneling, bookshelves, oversized leather chairs, fishing trophies and assorted golf memorabilia. Yes, that’s Craig with Soviet Union President Mikhail Gorbachev, also Canadian parliamentarians and golf notables. Mary feels comfortable here, especially when Craig is away:  “I walk in, put my feet up, turn on the fire, pour a glass of wine . . .” and relax. 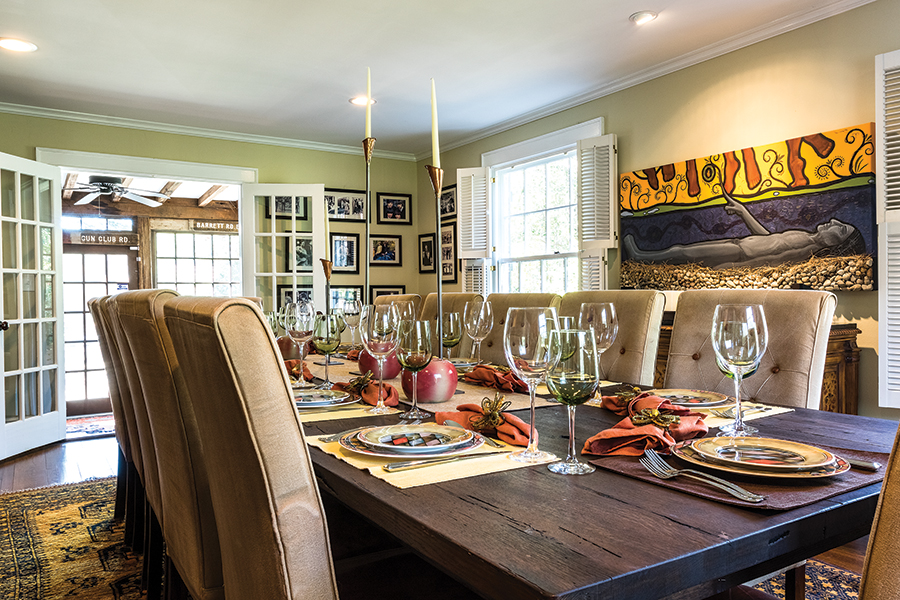 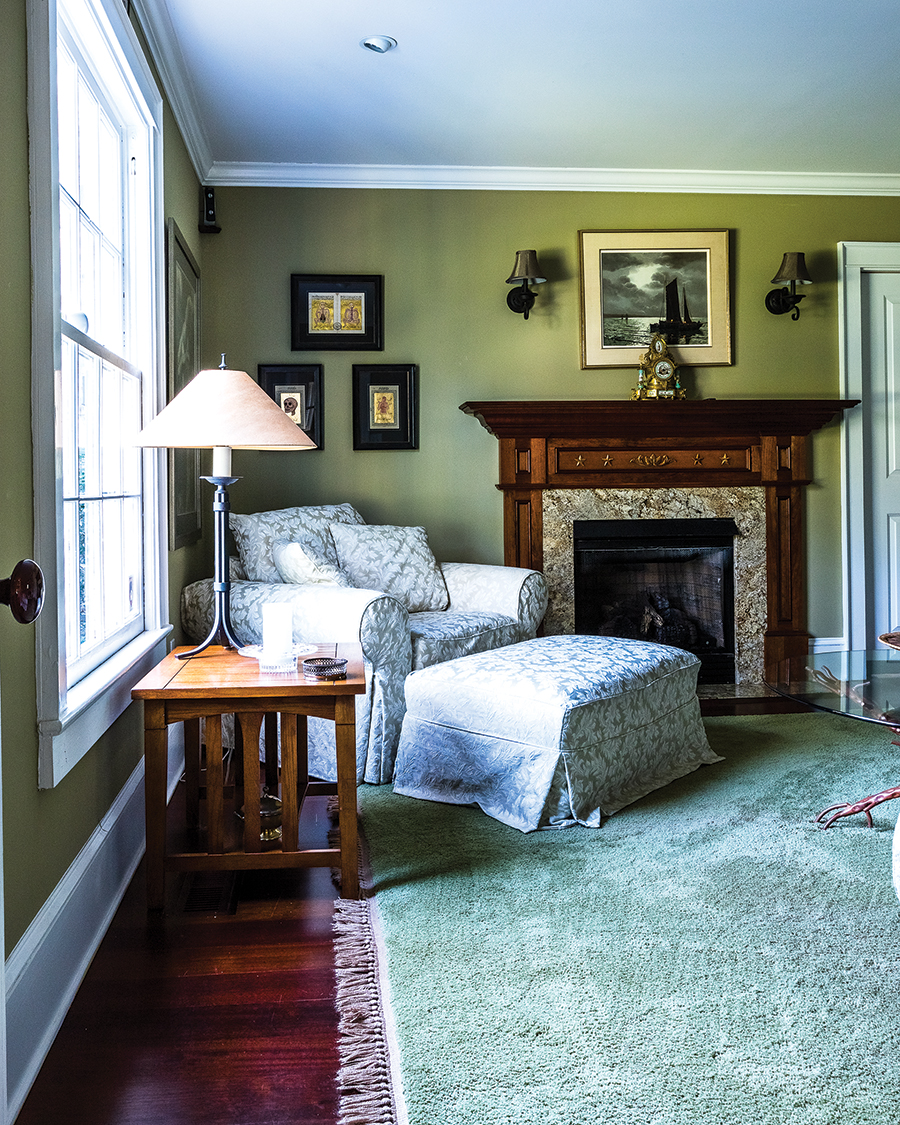 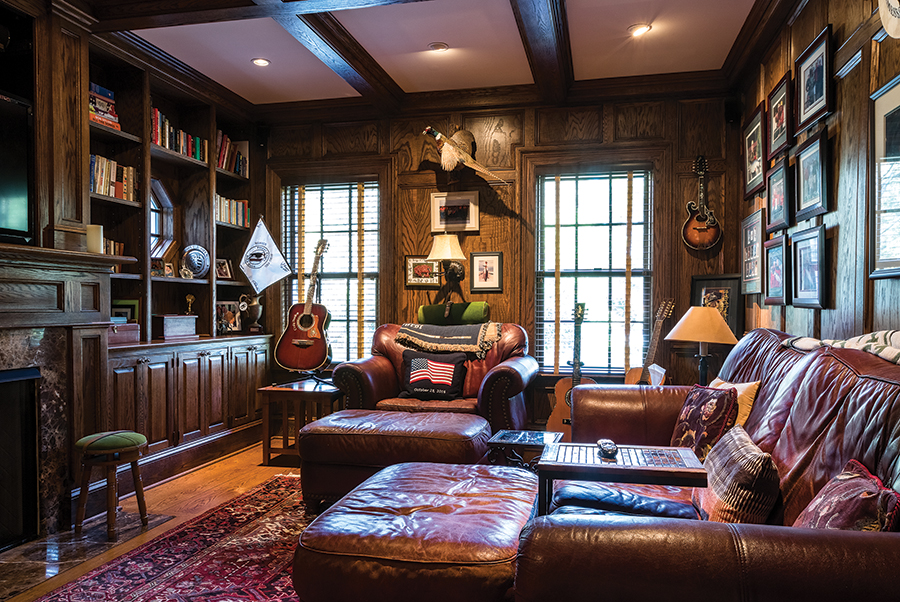 Upstairs dormer guest bedrooms on the cottage side are a nice size, decorated traditionally. Cross over into the addition and everything gets bigger. Much bigger. The Big Room (usually described as “great” or “family”) with more built-in bookcases, a three-story vaulted ceiling with skylights, exposed rafters and beams, a circular candle fixture suspended from the apex, stone fireplace with raised hearth, maroon brocade on sofas and chairs set a Tudor tone contradicted only by an enormous folk-art painting leaning on the mantel.  Side walls are entirely paned windows and doors, providing light to offset the dark woods. On either side stand dining room tables, one from Mary’s family, the other from Craig’s.

“We like stairs,” is Mary’s explanation for the open staircase with balcony over the Big Room, leading to the master suite: a bed-sitting room with fireplace, a quirky three-legged coffee table made from a tree trunk cross section, an unusual tiled shower room (no messy glass enclosures). Finally, Craig’s man cave extraordaire, with fitness equipment, steam and sauna, guitar display, office nook and bear skin with head, taken down by Craig himself, in Ontario.

Mary’s confluence of décor styles is her own, unassisted by professionals. Furnishings in storage during their European sojourn have traveled from High Point to Canada and now back to Southern Pines. Enhancing these are two stunning family heirloom sideboards, various tables and an antique rocking chair belonging to Mary’s mother, reupholstered in a leopard print — delightfully quirky.

“We live outside in the summer,” Mary says, when their two daughters and four grandchildren arrive for six weeks. The terrace garden with pathways, raised beds and fire pit once hosted a Rooster’s Wife-style concert. This postcard needs horses leaning over the paddock fence. For a while, the Dunlops boarded a few but no more. Instead, Mary has installed a vegetable garden that supplies the kitchen when she — or someone else — cooks. “I’ve forgotten how,” she says. 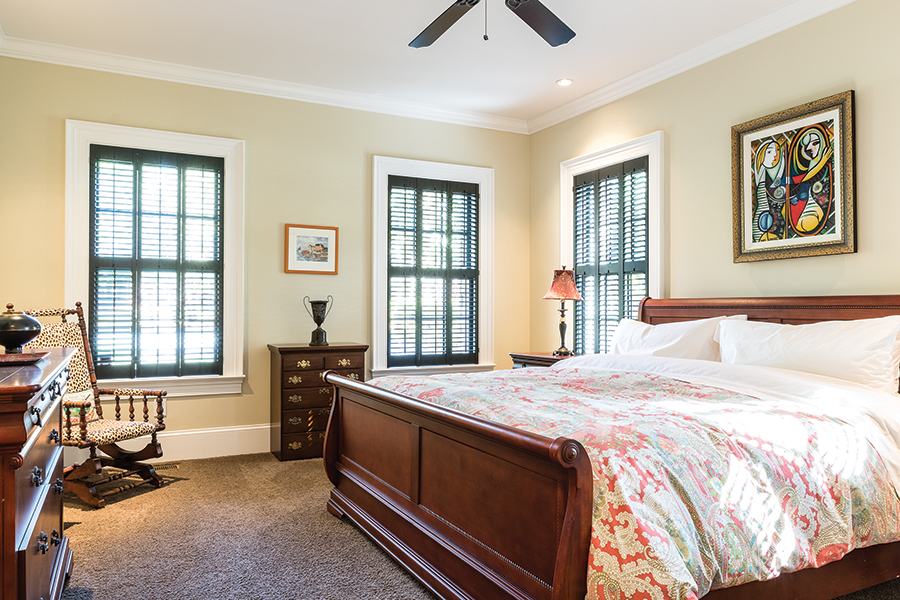 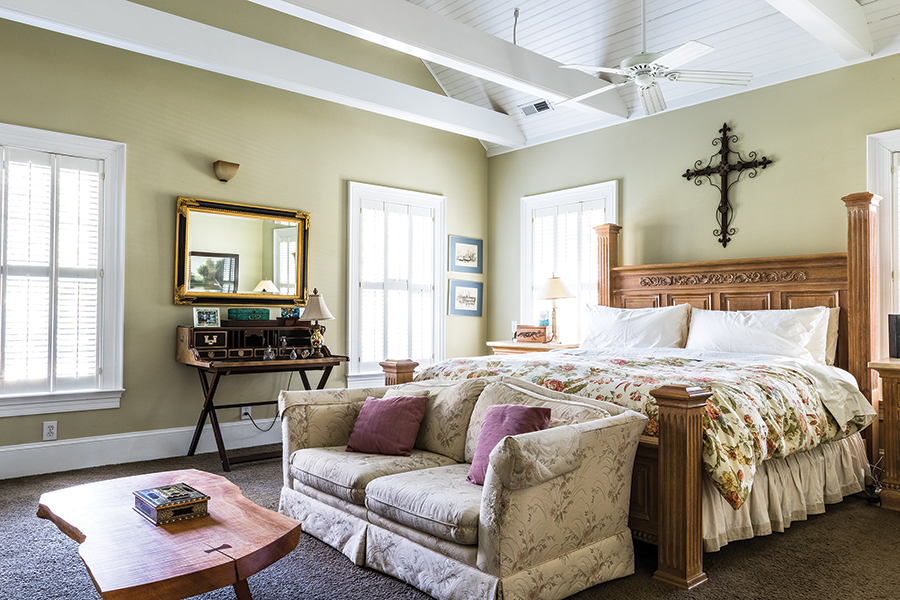 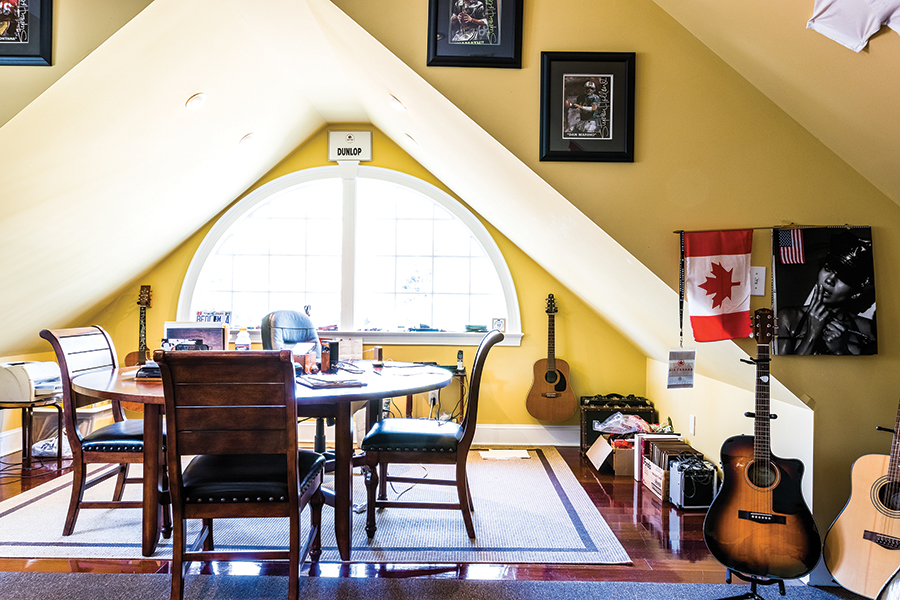 Stone Oaks is a home not only of voices but layers representing well-traveled lives. Along with eclectic art and furnishings Mary is not above levity, as in a ceramic figurine on the hall table, titled “Happily Dying of Chocolate.” The wood in the sunroom may have been rescued from a local barn but posters along the porch tease “Asylum for the Insane, Evaluation Center.” Giant glass and papier mâché pears adorn side tables in the Great Room. Mary boldly hangs Picasso’s familiar Girl Before a Mirror over a king-sized sleigh bed.

Even the land speaks for itself. Longleaf pines are absent, replaced by mature banks of rhododendron. The gnarled trunk of an ancient pin oak dominating the circular driveway resembles an elephant hide. Ivy entwines other trees. “What I wanted was a comfortable, friendly, warm home, nothing antiseptic or pretentious,” Craig maintains. He likes that every room can be a separate living space, with its own personality. “I needed a home able to absorb my junk. Walls covered with things and pictures add comfort.”

Mary concurs: “I didn’t want perfection, just a place where if you spill some wine, it’s OK.”

Not to worry — there’s plenty more in the 600-bottle temperature-controlled wine cabinet. There’s probably a song for that, too, although more likely Frank Sinatra than Garth Brooks.  PS