If the beautiful people were there so was LeRoy Neiman, up close, with a sketchpad, a cigar and a mustache that, over his lifetime, seemed to grow in its flamboyance at the same rate as the artist’s renown. In 1959 one of those places was the Hunter Trials in Southern Pines, where the heirs of generational fortunes amassed in businesses as romantic as diamonds and gritty as tobacco gathered to ride to the hounds.

Neiman came to illustrate his “Man at His Leisure” column in the risqué (at the time) Playboy magazine, so new it was barely more than a puppy itself.

Outside the barn at Ginny and Pappy Moss’ Mile Away Farm, the epicenter of the hunt, Leonard Short ran into the painter. “I remember LeRoy Neiman introducing himself to me,” says Short, hardly more than a boy at the time. “I didn’t pay any attention to who he was. He asked if he could sketch some horses there. I said by all means, because we have a lot of artists around town that would do that anyway. Come to find out he was there to do the Hunter Trial course.”

Sixty years later Short discovered a Neiman serigraph done in 1977 available at Leland Little Auction in Hillsborough. “That’s kind of one of my hobbies,” says Short, “much to my chagrin. It keeps me in the poorhouse. He was an impressionistic artist, which I never cared for, but I had to have that one with a little bit of Southern Pines history in it.”

As stylistic as Neiman’s work could be, Short had no problem identifying Neiman’s representations of Margaret “Wiffi” Smith, W.O. (Pappy) Moss and Mrs. Winston Guest.

“So it was,” said the Hunter Trail piece in Playboy, “that Neiman entered this world apart, observed the ancient and arcane sport of pursuing renard over hill and dale, met the well-favored followers of the hounds, observed them in their recherché habitat and transferred his vivid impressions to sketch pad and canvas. The scene has been written about by insiders and for insiders; it has been rendered in etching and old print. This is probably the first time, however, that a contemporary urban artist has spent five days as the guest of a hunt, caught its spirit and savored with total freshness of vision, and made notes — in words and pictures — of those things which struck him as unique and memorable.”

Born LeRoy Runquist in St. Paul, Minnesota, in 1921, Neiman was raised mostly by his mother, whom he describes in his autobiography All Told as “a reckless woman, but I loved her. She was wild and irresponsible, got married several times. Feisty, she wouldn’t put up with this or that guy’s nonsense. She was a big influence on me. Her influence came through her independent spirit . . . she was a freewheeling soul and that’s what I got from her.”

Having appropriated the last name of one of his mother’s husbands as his own, Neiman grew up hardscrabble during the Depression. “That’s where the Roaring Twenties went and where flashy small-time hustlers, stool pigeons, mutts and rummies acted out their dreams. You’re in a bar. You tell a story. It’s a tall tale, but as long as happy hour is going on, everybody buys it, so it becomes true,” he wrote.

For entertainment Neiman and a friend would hop freights “to Duluth, Grand Forks, sometimes as far as Chicago . . . Looking out the open sliding door, it’s like a movie flashing by.” 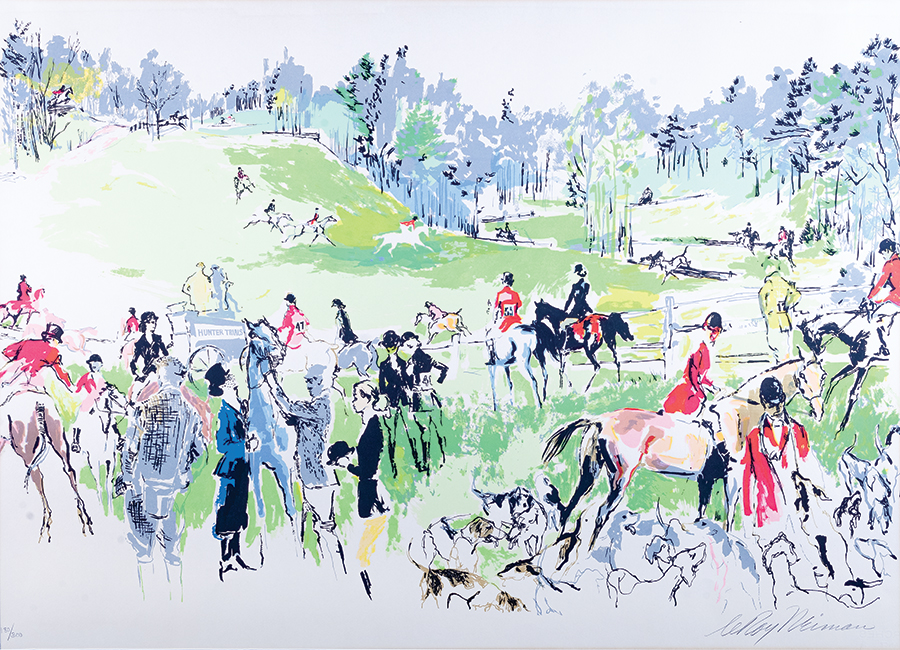 He sketched his way across Europe in World War II. “I fought at the battle of Normandy, I slogged through the Ardennes, and I celebrated the liberation of Paris on the streets with beautiful French girls throwing flowers at me. I said good-bye to my first true love and discovered what I really wanted to do with my life.” And, at one point, was arrested for being AWOL.

Back in America he studied with Clement Haupers in St. Paul, then enrolled in the School of the Art Institute of Chicago. He married, divorced, became an instructor at the Art Institute and stumbled upon what would become his style.

“I was still teaching full time . . . and getting into group and solo shows — but truth be told, I hadn’t figured out who I was as a painter,” writes Neiman. “In every artist’s life there’s an epiphany, the turning point that crystallizes everything that came before. I remember my turning point as if it were yesterday. One Saturday afternoon in ’52, Louie, the janitor for the apartment building next to my studio, was carting wheelbarrows of quart and gallon paint cans to a dump truck. When I asked what he was up to, he shrugged. ‘Gotta get rid of all these half-empty cans left over from painting the apartments!’ I looked at the labels. All high-gloss enamels. ‘Can I take them off your hands?’ I asked.

“Louie was more than happy to let me have the lot. Back in my basement I lost no time pouring and dripping straight from the can, the paint dribbling and splattering, puddling and meandering like multicolored snakes. Then with artist’s palette knife and basic plastering tools I began spreading and swiping the thick, lustrous fluids. Since that day, liquid enamel paint and later adding in liquid acrylics have been my chosen medium.”

The ’50s wanted nothing quite so much as to put war and Depression behind them. Neiman wanted to help. He was dating a woman, his future wife, Janet Byrne, who worked as a copywriter at the department store Carson Pirie Scott. One of her co-workers was a young man named Hugh Hefner.

“Then one day Janet and I are walking down the street, and here comes Hef in the other direction. Without missing a step as we passed each other, he shouted out, ‘Hey, LeRoy, I’m starting a magazine. Will you do something for it?’” In the blink of a bunny, LeRoy Neiman was Playboy’s artist in residence.

While it’s unclear whether or not Neiman ever returned for the traditional Thanksgiving opening of the hunt season, he refers to it obliquely in his autobiography. “They say a proper initiation into the upper classes involves killing something,” Neiman wrote. “My introduction to this grand old pageant had kicked off in Southern Pines, North Carolina, where I witnessed the blessing of the hounds, as close to religion as I’d been since my wedding day. Considering these exquisite but high-strung creatures were born and bred to kill, I wondered if the blessing was an act of absolution.”

Despite the massive popularity Neiman’s work achieved, and the storybook life he led, he didn’t enjoy the critical success reserved for “serious” artists. “Whatever the critics said about me, though, people were buying my paintings,” he wrote. “If the critics didn’t like it, to hell with them. I didn’t know how to paint any other way or, for that matter, how to live any other way. In fact, I was proud of my brash new style. I continued to exhibit, my solo shows embraced by the public but snubbed by the critics.”

He sold canvases as fast as he could paint them, eventually becoming an industry of his own. “They wanted a Neiman and I was going to give it to them, no matter what any of the art police had to say about me.” It was a blessing all his own.  PS