Only a few steps from the street, you’ll hear the soothing sound of water cascading into a burbling stream. It’s a hidden waterfall carved from a niche in the land’s natural slope and artfully built of stacked stone, ancient river rock and boulders. Mosses mingle among ferns, while dainty tufts of violets peek out from rocks, eager for sunlight. Birds and the occasional dragonfly linger in this Zen-like oasis.

At the stream’s edge is a rugged piece of Tennessee slate engraved with the words Anniversary Pond 2002, marking the significance of the water garden. Built by Tom and Pamela Cochran of Pinehurst not long after settling here after Tom’s retirement, the garden celebrates their 25th wedding anniversary.

“It was a gift we gave to each other,” says Pamela, noting that while they had little interest in travel, they adored their new home. “I’ve always enjoyed listening to the water, and this is my haven and makes our time on the back porch special. It’s a place to wind down and meditate.”

When the Cochrans built the water garden, its centerpiece was a koi pond. They enjoyed the brightly-colored fish for years, but after problems with the pond and not finding someone to maintain it  they parted ways with the koi.

Tom says they considered taking the entire water feature out at one point, but quickly nixed the thought. “Pamela absolutely loves the sound of the water, so we decided to find a way to keep it.”

A landscape contractor thought the water garden was splendidly built. “He told us, ‘If maintenance is the problem, then remove the pond and keep what you like — the sound of the waterfall and the stream,’” recalls Tom. “Until then, we thought we had only two options: Either keep the stone walls and landscaping around them or rebuild the area, but without a pond.” 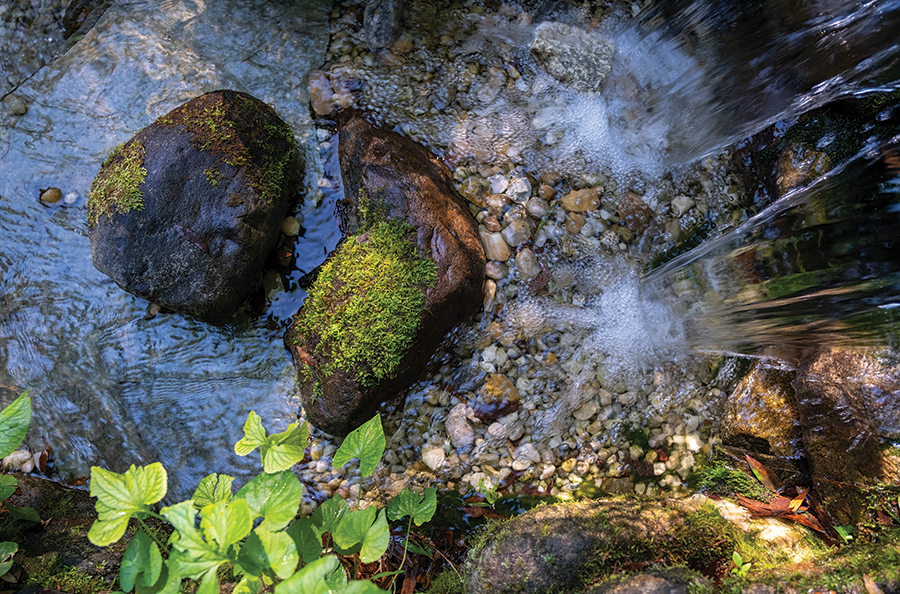 They hoped they could craft a solution — and at a reasonable cost. “If the price was right, then we were all in,” Tom says.

A friend passed along the name of their lawn maintenance contractor. The Cochrans called and were astonished when he showed up two hours later. That contractor, Barry Hartney of Zen Ponds and Gardens, became “very involved in the project from the moment he stepped into the garden.”

“I offered to do pond maintenance for them, but they really wanted to be done with the pond. They were considering removing the waterfall and stream, too. I was stunned,” Hartney says. “This water garden looked like it had been there forever, and it’s the type of work rarely seen.”

Hartney, who has owned his landscaping business for nearly 25 years, sensed that the water garden was very personal to the Cochrans. “It was their oasis, and they derived great pleasure from it. I wanted to help them find a way to keep the best part of it,” he says. So he dug a little deeper.

The Cochran’s pond problem stemmed from stormwater runoff. They don’t have gutters and downspouts, and stormwater rushed off their porch, washing mulch, soil and leaves into the pond. During heavy storms, which have become more frequent, the pond flooded, overflowed and washed out the area below it. The standing water was also a breeding ground for mosquitoes. In addition, the landscaped area behind their porch, eroded by stormwater, couldn’t support vegetation.

After a thorough review, Hartney recommended moving the stormwater runoff to an on-site rain capture area, where it would percolate into the soil, feeding nearby plant life.

“I’m practical and like to work with nature, not against it,” says Hartney, who is a graduate of the Abraham Baldwin Agricultural College School in Tifton, Georgia. “Whatever the problem is, I look for the natural solution that will hold up over time.”

Hartney’s solution was a rain garden. That, combined with the addition of a dry stream bed and some good old drainage work, would do the job, and at a price that worked. The Cochrans’ oasis would be renewed. 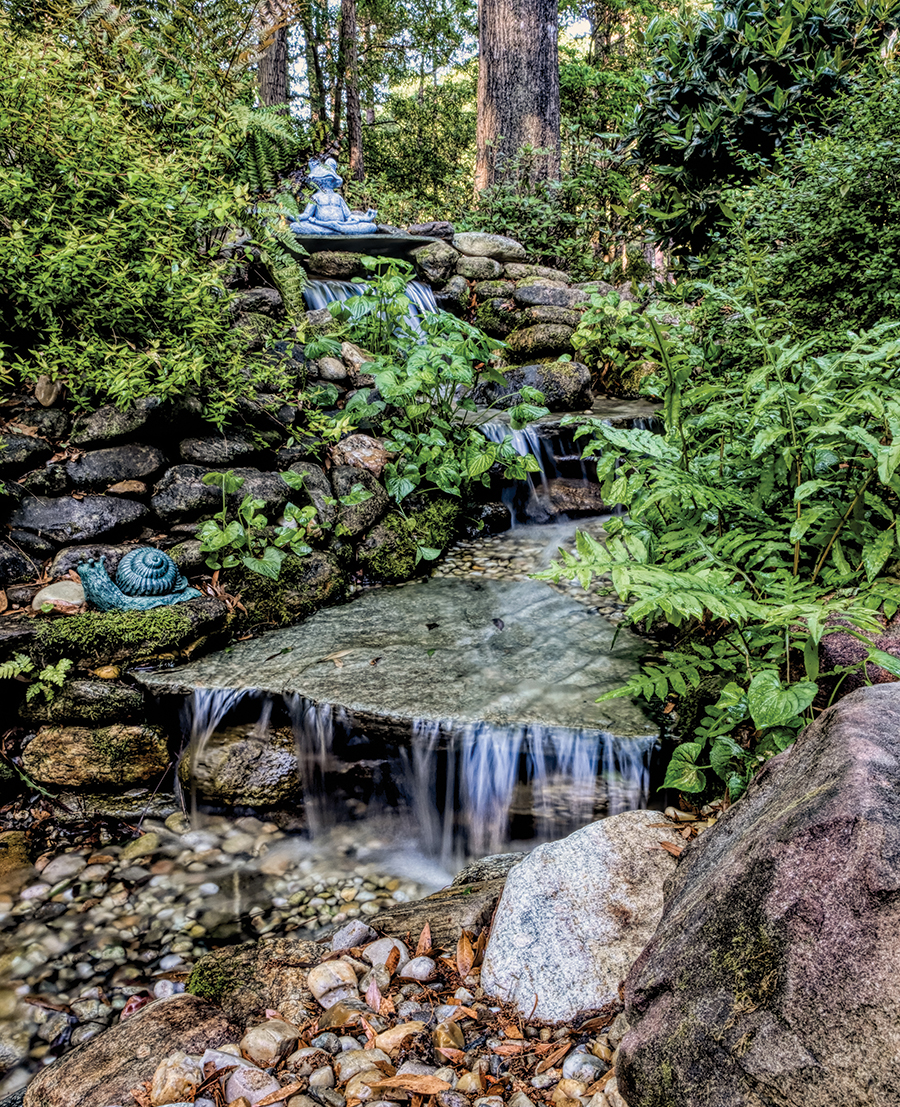 Work began by carefully removing a portion of the existing koi pond’s 4-foot-high stone wall and setting its river rocks and boulders aside. “That was tricky,” says Hartney. “Part of the stone wall held up the hillside, and we didn’t want to damage the integrity or beauty of the wall.”

The rock- and dirt-moving effort took place without the benefit of machinery that could cause packed soil, erosion and other damage, especially in a tight or landscaped area.

“I rarely use machinery,” says Hartney. “When we work around existing stuff, we want the honest feel of a shovel and pickax.”

To keep the existing waterfall and stream meant other modifications. In the old system, the waterfall recirculated water from the deep koi pond, which required biofilters for healthy fish. When Hartney removed the pond, out came the maintenance headache — its old liner, pump, biofilters and skimmer system. Then, he excavated deeply to install the reservoir for the new, low-maintenance, pondless pump system that keeps the water recirculating to the waterfall.

“A large in-ground reservoir pumps water up to the waterfalls, and then it flows back down to the stream and into the reservoir,” he explains.

Aside from keeping the aesthetics of the waterfall and stream intact, he also needed to direct and capture runoff from the porch area overlooking the water garden.

“That area under the roof’s drip line was pounded with rain and nearly bald from frequent washouts,” says Hartney. “It was important to soften that impact, so we put down weed barrier cloth and used rocks instead of mulch to cover it. Then we naturalized the area to blend it into the property.” 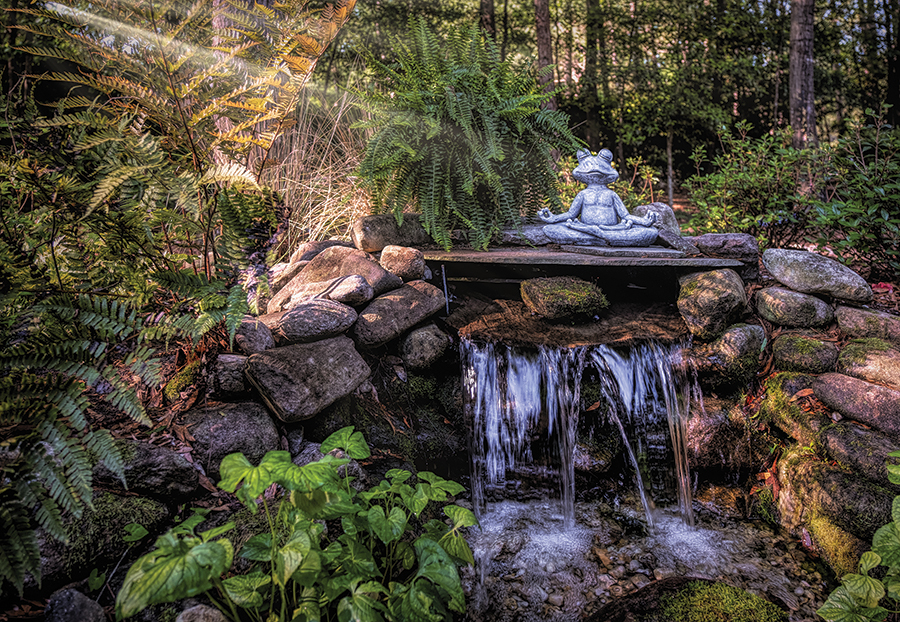 The Cochrans selected several shade-loving and decorative dwarf camellia sasanqua ‘Shishigashira’ that offer a profusion of rosy-pink blooms in the spring and fall. A glossy-leaf paper plant (fatsia japonica) anchors a corner, away from the midday sun.

When it rains, the stream may fill and overflow, but it’s no longer an issue. A dry stream bed, which serves as a shallow retention basin, is sited at the end of the stream. The basin is lined with weed barrier cloth and filled with river rocks and cobblestones. This porous area allows stormwater to filter through quickly, where it is absorbed into the soil and is a nutrient source for the plants.

If the basin fills during a heavy rain event, a concealed outflow device channels the water into the property’s drainage system, where it infiltrates the ground. “In the heaviest of recent tropical storms, we’ve seen the water dissipate within a couple of hours versus sitting here for days,” says Tom. “We enjoy our porch view of the garden now — in the sunshine and during the rain.”

The revived oasis provides a rich habitat for insects, birds, reptiles and mammals who find shelter, food, and water while veiled by the shady treetops. Nestlings twitter for attention. Yellow swallowtails drift on a light breeze, and a startled frog spontaneously leaps from a rock seeking the safety of the stream. Nearby, the luscious lime-green hue of emerging fern fronds enlivens a small but unique garden that draws attention. 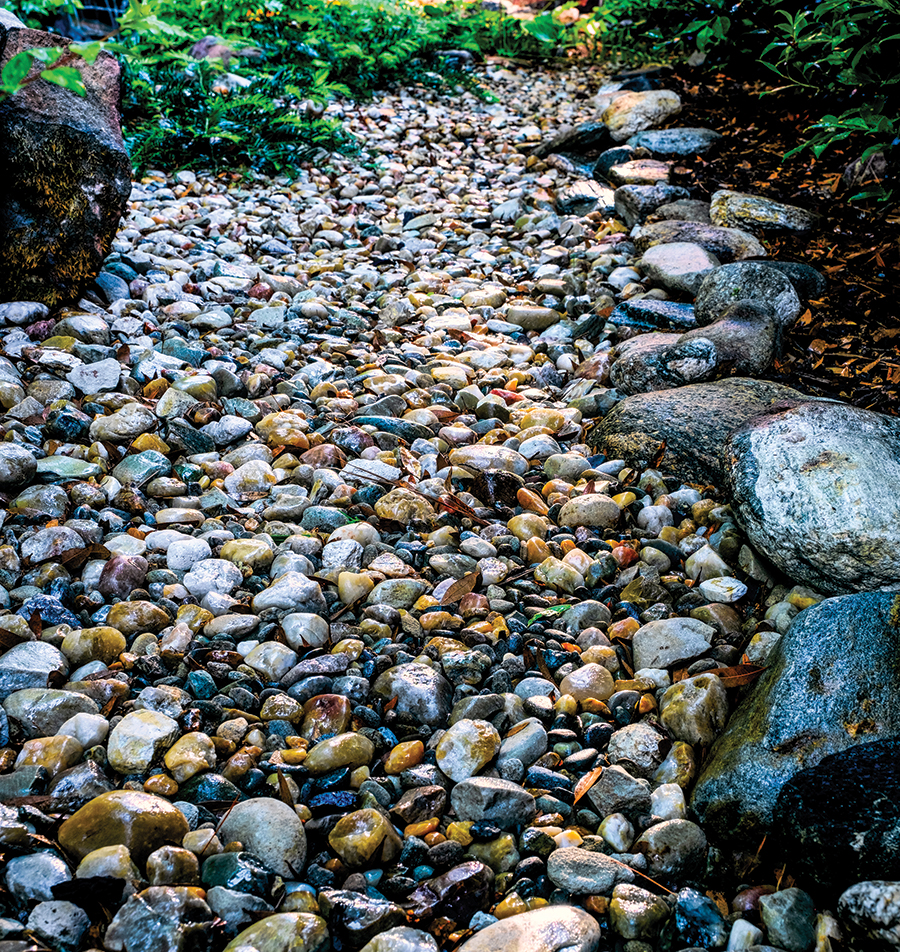 “That’s the Friend’s Fern Garden,” says Pamela, pointing to the garden composed of assorted young ferns. Holly ferns (Cyrtomium falcatum) blend with the bronzy fiddleheads of native and colony-forming Netted Chain ferns (Woodwardia areolata) and Autumn ferns (Dryopteris erythrosora). All happily coexist under the protective shade of live oaks (Quercus virginiana), one of the most valuable trees to wildlife.

“Friends bring me ferns from all over,” she says. “And the rocks that surround the fern garden and other areas are the ones that Barry removed from the old koi pond. I didn’t want to lose any of them.”

Hartney brought in most of the earthen-toned boulders of many shapes and sizes, artfully working them into the landscape surrounding the stream. “He was meticulous,” Pamela says. “He has a creative eye.”

Some of the rocks, such as the Anniversary Rock, which they put in a safe place during the project, hold special meanings to the Cochrans. Others include the Sitting Rock (named for obvious reasons) and the Bread Rock, which resembles a loaf of Vienna bread with its rounded and tapered edges. It formerly stood on its end in the pond, a focal point for Pamela’s daily mindfulness meditation.

Hartney waited until the end of the project to place the final rock. Carefully searching the garden, his eyes fell upon the spot. He knelt on the dry stream bed and tucked the Anniversary Rock into place along the edge of a flat boulder. Its contours were a perfect mate with those of the boulder, making its placement a touching tribute on the Cochran’s 43rd anniversary.

Renewed, their oasis is a marriage of rock and water — a sustainable and serene combination.  PS

Claudia Watson is a frequent contributor to PineStraw and The Pilot. If there’s a garden that you’d like her to visit, please contact cwatson87@nc.rr.com. 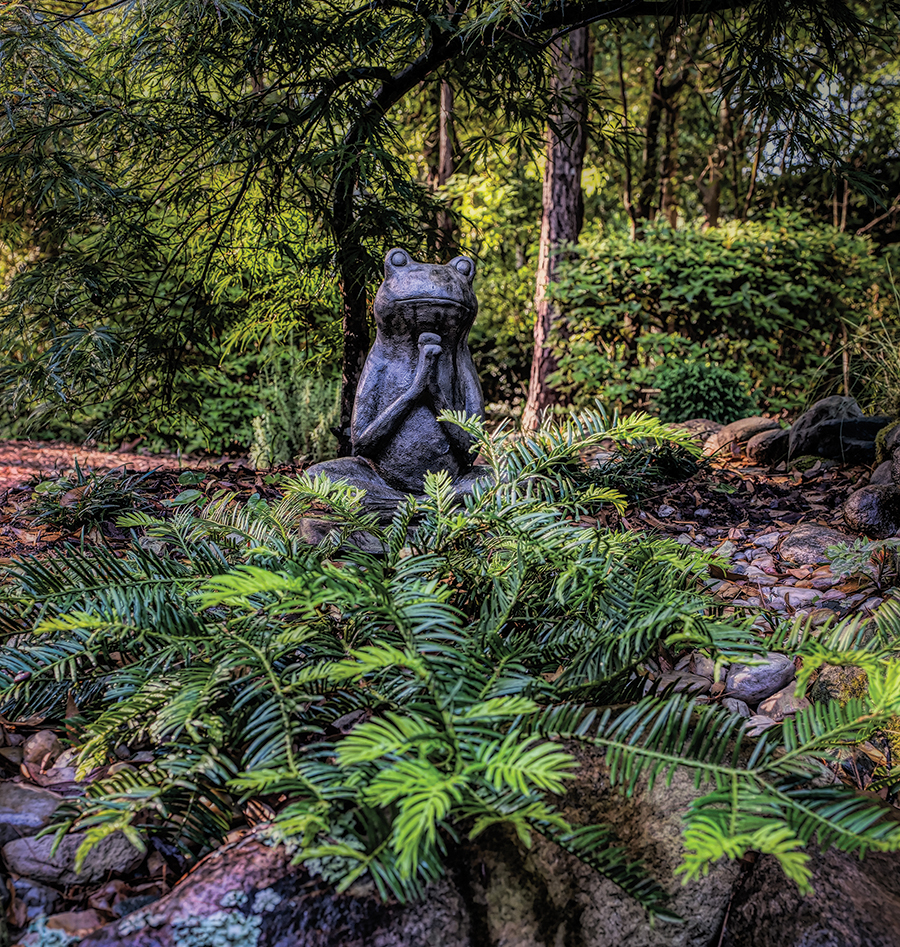