A Legacy of Imagination

If words well chosen are music to the soul, the Weymouth Center for the Arts and Humanities has been the South’s premier concert hall for almost a century.

James Boyd, who built the house on Weymouth Heights in rambling increments early in the 20th century, wrote his four novels, a book of short stories, his many poems and his voluminous correspondence there, and many of the great American writers of the last century visited the Boyds, talking writing in the great room and library and whiling away the evenings over drinks and witty banter.

Writers residencies and art colonies abound — Poets & Writers lists more than 300 worldwide — but few such entities boast the literary heritage of the Weymouth Center. Author/editor Jonathan Daniels claimed that the Southern Literary Renaissance began in the living room at the Boyd house, but Weymouth doesn’t need hyperbole to bolster its literary credentials. There’s no doubt F. Scott Fitzgerald held forth on the theory of the novel when he visited with the Boyds for three days in June of 1935, and Thomas Wolfe climbed through an unlocked window into the great room on a January morning in 1937, settling in for a four-day respite. Sherwood Anderson was a frequent guest who lingered for weeks, and Maxwell Perkins, the Scribner’s editor whose clients monopolized the 20th century literary canon, enjoyed visits at the Boyd house. Pulitzer Prize-winning playwright Paul Green was James Boyd’s best friend.

Surely Weymouth’s literary mojo works its magic on contemporary writers in search of inspiration, but the old house’s ambience is also a contributing factor: Slanting afternoon light decants through ancient wavy green glass windows, inspiring moments of pure vision, the jumbled ups and downs and switchbacks of the meandering hallway in the writers’ quarters are likely to encourage inventiveness and awaken the imagination, and each bedroom, uniquely its own universe and named for a writer who visited during the last century, conjures up words ensconced indelibly on the American psyche. 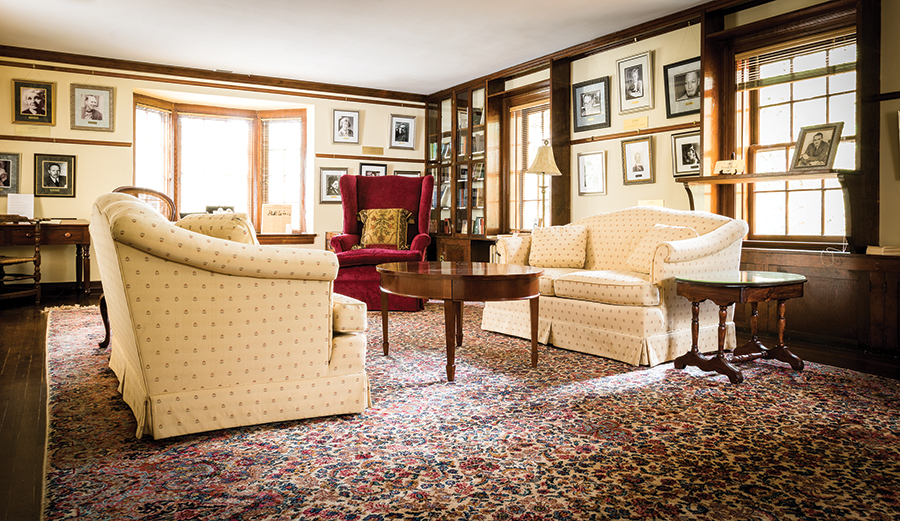 When the house is closed to the public, visiting writers are free to wander rooms, including the North Carolina Literary Hall of Fame, where voices eloquently resonate. For those romantic nature poets yearning for the natural world, Weymouth’s meticulously maintained grounds with their longleaf pines and springtime weeping cherries are inviting enough, and less than a mile east is the boundary of Weymouth Woods Sandhills Nature Preserve, donated to the state by the Boyds, with its towering pines, wildflowers, wire grass and rare species, including the red-cockaded woodpecker, pine barrens tree frog, bog spicebush, and fox squirrel.

Best-selling author Wiley Cash, who’s stayed at Weymouth three times in recent years, communed with the ghosts: “I wrote and revised a chapter of my recent novel, The Last Ballad, at Weymouth in the fall of 2015. I was in the Maxwell Perkins room, and I joked with the other residents that Perkins was known for cutting thousands of words from Thomas Wolfe’s Look Homeward, Angel, and I was hoping his spirit in the room would help me add thousands of words to the book I was working on. He granted my wish.”

Margaret Maron, the author of 30 books, has been a regular writer in residence, accompanied by a group of fellow mystery writers: “We call ourselves the Weymouth 7,” says Maron, “because it was at Weymouth that we held our first writer’s retreat — Mary Kay Andrews, Brynn Bonner,  Diane Chamberlain, Katy Munger, Sarah Shaber, Alexandra Sokoloff, and me. For one heady week, we met every morning to bounce ideas off each other, then retired to our separate solitary spots and wrote until it was time to gather for supper. We’ve scattered now, but those first annual visits helped produce at least 20 books and we shall always be grateful that Weymouth welcomed us so graciously. (Although we could have done without the ghost!).” 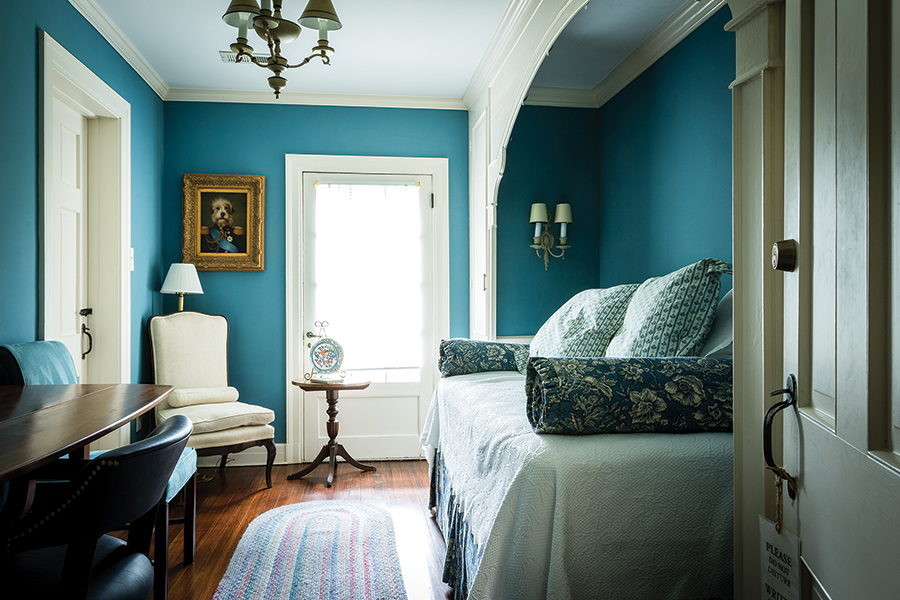 The Visiting Writers Program has come a long way in the last four decades since the Friends of Weymouth acquired the Boyd house from Sandhills Community College, and Sam Ragan, Buffie Ives (Adlai Stevenson’s sister), Guy Owen, Paul Green and other luminaries conceived of Weymouth as a writers’ retreat. At an organizational meeting in the dining room, Guy Owen, author of The Ballad of the Flim-Flam Man, joked, “We can put the pornographic writers in the attic of the barn,” to which Ms. Ives, always proper and outspoken, immediately objected: “There will be no pornographic writers at Weymouth!” No one attempts to influence what is written at Weymouth, and it’s unlikely that any of the writers in residence have sidestepped, in the service of middle-class good taste, the truth as they find it. Thus the program has attracted a wide variety of authors from Tom Wolfe (The Electric Kool-Aid Acid Test and I Am Charlotte Simmons) to Oprah’s Book Club author Robert Morgan (Gap Creek and Boone).

Katrina Denza, who directs the Visiting Writers program, admits that it’s a balancing act. “We try to have double the number of new writers so that every level is represented. And we’re always working to improve the program by having the writers give readings open to the public. Recently, Pat Riviere-Seel read from her memoir-in-progress at Belle Meade and Sharon Swanson showed a film she made about Elizabeth Spencer at Penick. Writers and poets have also volunteered for Weymouth’s Write-On Camp in the summer, and they’ve acted as judges for our Moore County Writers’ Competition as well as serve on the Cos Barnes Fiction Fellowship Committee.” 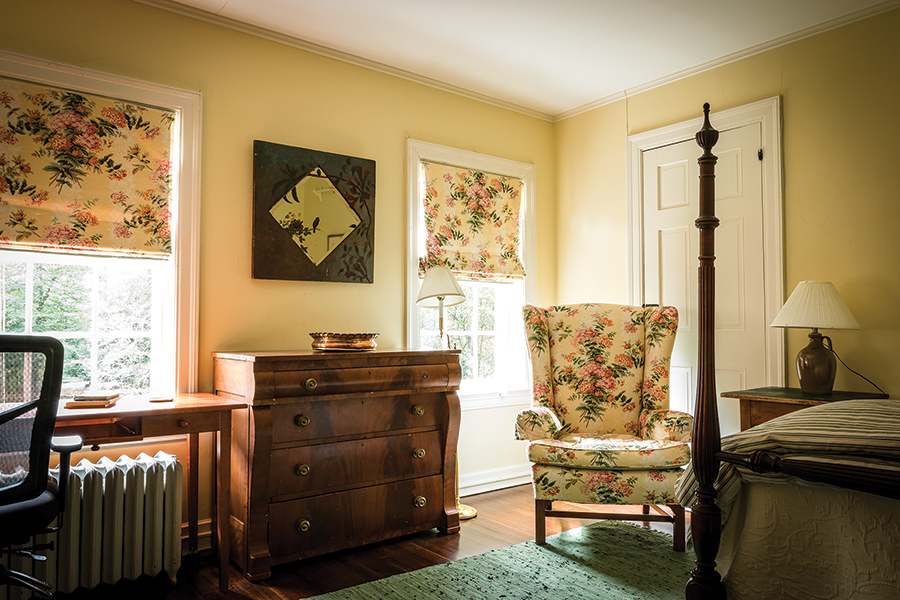 During a November residency, Clyde Edgerton, who wrote the conclusion to Where Trouble Sleeps at Weymouth in the late ’90s, was back at work on a new novel. He brought his banjo along and on the last Tuesday of the month, sat in with the Weymouth Song Circle, entertaining everyone with his original songs and stories.

Residencies are open to North Carolina natives, current residents, or to those with significant ties to the state. Each applicant must submit a list of publications — poems, short stories, screenplays, novels, articles or works of nonfiction — and a plan to work on a specific project during the stay. A minimum residency of one week is required.

Weymouth provides a room with a desk, bed, reading chair, blankets and pillow — nothing luxurious but more than adequate for the writer who seeks solitude. Linens, toiletries and traveling expenses are the participant’s responsibility. Wi-Fi access is limited to the North Carolina Literary Hall of Fame study. The writers’ area of the house has a full kitchen, three baths, a sitting room, covered veranda, and four bedrooms.

“We have a wish list of improvements for the program,” says Denza. “We are constantly looking to upgrade the writers’ experience at Weymouth. We’d like to provide meals for the writers. Unfortunately, we don’t yet have the resources to do that, but there are excellent restaurants a few blocks away on Broad Street.”

The writers who stay at Weymouth aren’t there for the cuisine. They believe in words the way a scientist believes in carbon — absolutely. Words permeate the ancient plaster walls, and each new writer in residence applies a fresh layer of literary history.

“There is something extra that lives in one who stays at Weymouth,” writes former Poet Laureate Shelby Stephenson, “the combo of magic and desire in being a writer in residence. I feel nostalgia for the Anderson room as I write those sentences. The joy and glow of wonder in those stories. And in that room I stayed in.”

Shortly after Fitzgerald’s 1935 visit with the Boyds, he wrote of happening upon his younger and more optimistic self: “I was with him again — for an instant I had the good fortune to share his dreams . . . And there are still times when I creep up on him . . . on a spring night in Carolina when it is so quiet that you can hear a dog barking in the next county.”

He may have been recalling his time at the Boyd house, where 80 years on writers continue to find inspiration in the fragile stillness of a Southern night. PS

Stephen E. Smith is a retired professor and the author of seven books of poetry and prose. He’s the recipient of the Poetry Northwest Young Poet’s Prize, the Zoe Kincaid Brockman Prize for poetry and four North Carolina Press awards.