Shoppers meander through rooms of the 118-year-old Bennett Street house-turned-retail shop of The Heritage Flag Company.

The faint, sweet scent of bourbon accompanies a visual feast of rough, charred and blond barrel staves crafted to stir the blood in the form of rustic American flags, works of art, no two exactly alike, varying in size from mounts on desktop easels to those three feet high and larger. Visitors express surprise: Website photos do not do the product justice.

“We hear that a lot,” says owner Heath Trigg. One customer review from the company website reads, “We purchased this flag for my father-in-law as a birthday present. I loved the look of it in the pictures on the website, but those pictures in no way do the craftsmanship justice. These flags are works of art.”

The story of The Heritage Flag Company is an American one of can-do spirit, hard work and self-determination, of Old South embraces the digital age. It is a Southern Pines micro-industry bred and born four short years ago, propelled by people’s thirst for the company’s now-signature product, a rustic American flag fashioned from whiskey barrel staves. Trigg set out to satisfy that thirst once he realized the number of potential customers for, by his estimation, “the most recognizable symbol in the world.”

His phone buzzes and his computer screen stands at the ready on his desk in what used to be his living room. Heath and his wife, Ginny, had their home and business offices occupying neighboring floors of their house until Heritage Flag’s need for space exploded. The couple moved, and now the entire house is dedicated to business and retail operations. The woodworking shop is in the back, repurposed from Trigg’s cabinetmaking business.

Though he speaks confidently about his business, his employees and products, Trigg remains somewhat mystified by the meteoric success of the company he founded, foregoing his original home building and cabinetmaking businesses.

“I could never have fathomed that I would own an e-commerce business that sells millions of dollars worth of wooden American flags,” he says. 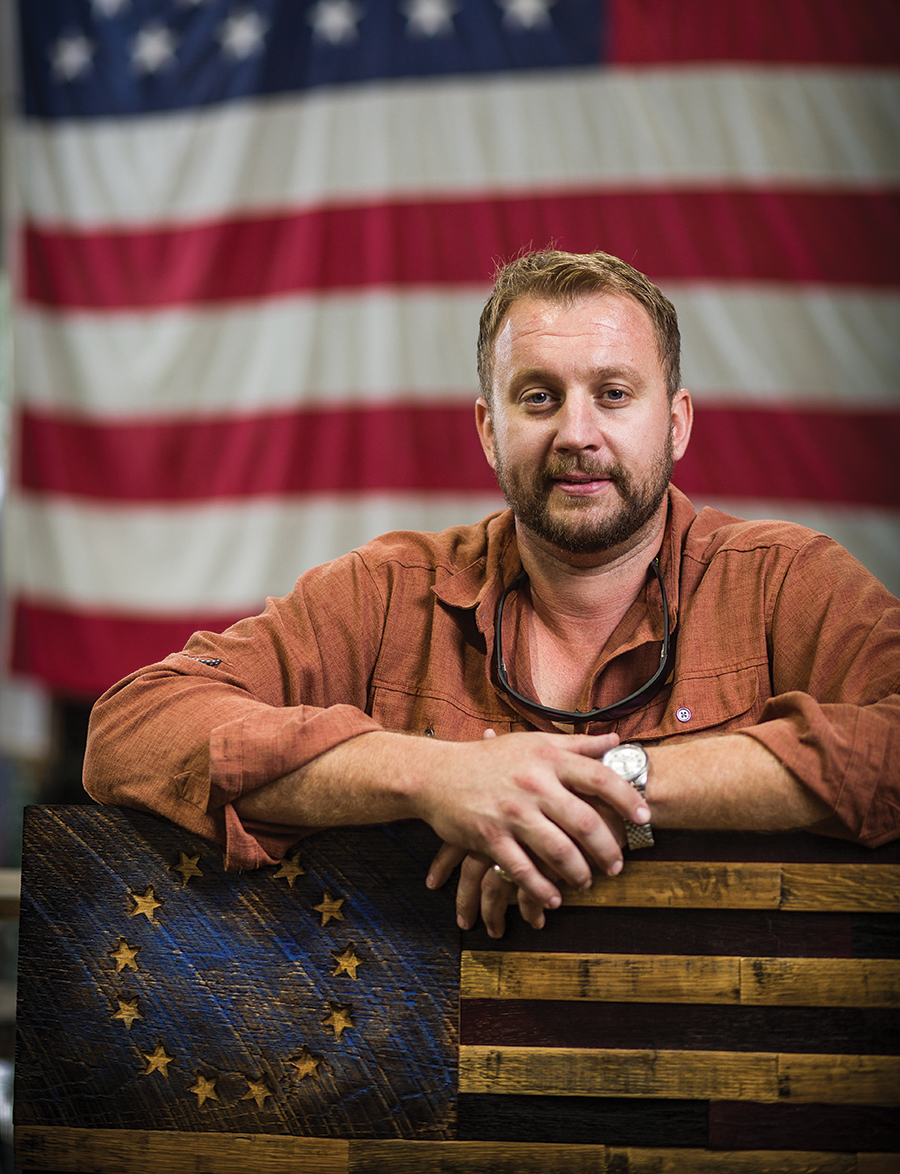 The company narrative — noticed by statewide media and beyond — begins with his contracted job at Southern Pines Brewing Company, where in 2014 he and his cabinet crafters built its unique taproom bar and tables using whiskey barrel staves, a Trigg innovation. The owners loved it. Trigg so respected the three brewers’ knowledge and background as Special Forces veterans that he wanted to surprise them with a gift at their opening celebration.

A flag was born.

“I had two other businesses,” he says. “We were building houses, we were making cabinets, and we were kicking butt doing it. We dreamed up this flag as a thank you gift at the end of a project and jeez — I mean, it’s just unbelievable where these flags are today.”

The “dreamed up” part is literal, by now a well-circulated plot point in the story, the moment when Luke the Weimaraner woke Trigg in the night as his master dreamed of a rustic American flag fashioned from those whiskey barrels. His wife’s kitchen notepad played a role. “In the middle of the night I walked out, got the Sharpies out, and drew a picture of it on that pink high heel shoe,” he says of the handy notepad, however unlikely a shape or color for the design of his dream. “The next morning, I literally came into the shop with that pink high heel shoe and showed it to the craftsmen.”

His team created the flag, varying the dark stripes using the charred inside of the barrel, and light stripes from the outside, and adding a bank of 50 carved stars. “We still constantly get questions about it,” says one of the brewery owners, Jason Ginos. “It’s the first or second thing customers ask about when they come in.” From that one gift grew ideas for several others, until the demand for the unique flags took on a life of its own.

Today there are Heritage Flags in the White House, the Pentagon and One World Trade Center. “We’ve presented flags to amputees, Gold Star widows, people who truly know what it is to sacrifice,” he notes, awed still. Donated flags have raised more than $1million for non-profit organizations. Nonmilitary customers abound as well. 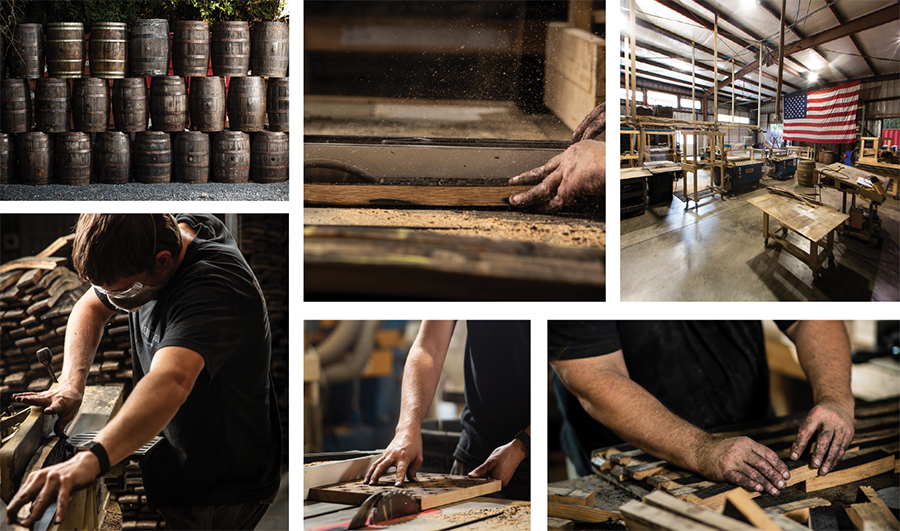 At an age where expounding on one’s history might be a short story, Trigg, 35, is keen on crediting his upbringing and the other influences that have shaped him and, by extension, The Heritage Flag Company. Unwavering attention to quality and customer service “play an immense role,” he says, attempting to explain the company’s phenomenal success. But, he refines the point. “When you think about it, it’s values. Family values.”

From early childhood growing up in Charlotte, Trigg looked forward to visiting his grandparents in Moore County. His mother, Laurin Williams Trigg, is one of seven children of Ruby and the late Winford Williams. Winford was one of 11 children who grew up here, many of whom remained, operating lumber mills, farms and related businesses.

“Any time I had a day off of school,” Trigg recalls, “I was kicking and screaming and moaning and groaning to come here and get on that tractor or work with Pop, ride dirt bikes or be in the woods or whatever.” Enamored of the Moore County country life, he knew he would settle here and start building after completing his business degree at Appalachian State.

On his father’s side, his dad and granddad served in the Navy. His dad was also one of seven, entrepreneurs in businesses from construction to fast-food operations. And Trigg took notes.

He counts his wife’s family, owners of a textile business, and the Brewery guys, as important influences. Ginos speaks of their symbiotic relationship. “His uncommon vision, his work ethic and the process. He does everything within the company,” Ginos says. “He’s an inspiration for me, my family and company.”

Inundated with requests from nonprofits, Trigg became somewhat disillusioned. “Hey, this is a problem,” he says. “The more we give, the more people will show up with their hand out. It’s insane. And really and truly we’re not helping them in doing that. We’re not.”

His solution was to ensure that at least some of those recipients invest “sweat equity.” A flag donation for children of the military’s Special Operations men and women might require the kids and families to show up on a Saturday, roll up their sleeves, sweat, sweep and otherwise pitch in.

Trigg finds the process rewarding. He gets positive feedback from parents who might have been leery at first, and the kids appreciate it. “You teach these kids these things,” he says. “You put them to work and you make them sweat, and they see it. They get it.”

He tosses out other tenets: Life isn’t fair; you should listen more than you speak; it’s not OK for somebody to feel sorry for you. 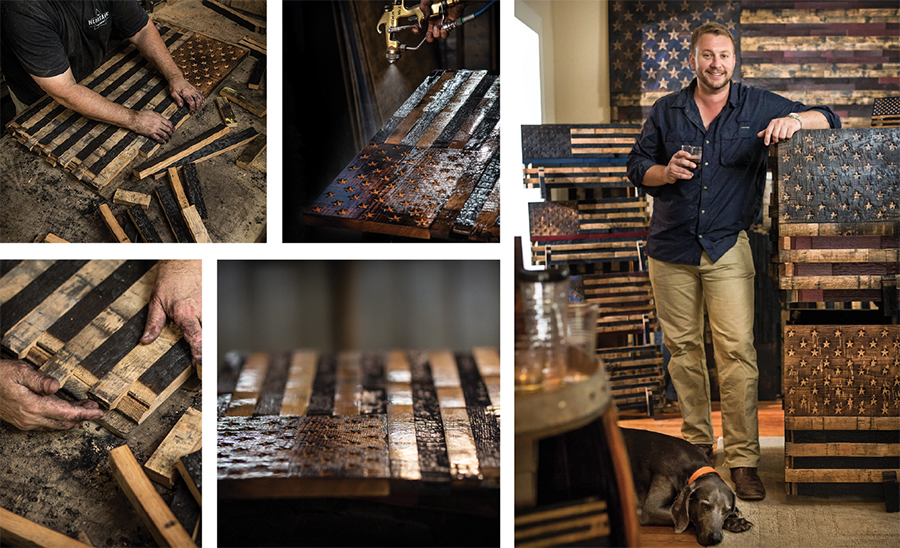 In a country he sees as divided, reclaiming American pride has become a sort of company motto. “That is what I think is the coolest thing that this company can do. A lot of people say, and I myself say, this country’s huge. Do you think your little butt here in Southern Pines with this teenie tiny business can . . . well, I don’t know. I have no earthly idea whether we can do something like that. I know if we don’t try, we’ve failed.”

Earlier this year, an 18-year-old who had been involved in a serious motorcycle accident was struggling with his recovery, relearning how to eat, talk and walk. “He is a miracle. Three weeks ago he, his mother and father came into our shop on a Saturday and helped us make, physically helped us, make flags,” says Trigg.

“He and his family came in to make four flags to give to the four doctors that saved his life. And . . . I got to go.”

Emotion wells up, the silence unexpected but welcome.

Trigg loves sharing these stories, but is guarded — like a true entrepreneur — not divulging company profits, sales figures, or detailed 5-year or 10-year plans. Looking far ahead, plans do include handing over The Heritage Flag Company one day to Charlie, the couple’s 1-year-old son.

So, whatever happened to that sketch, the very first one scribbled in the wee hours on the pink high heel notepad?

“It’s in my safe downstairs,” Trigg says. “It’s crazy. It’s cool. We have it insured. It all started with a dream.” And a passion.  PS

Amy Griggs has worked as a community journalist and middle school teacher. She lives in Wake County and counts the Sandhills as her second home.