A Cut in Time

Carving out a piece of art

Scars have a tale to tell. Some are the hieroglyphics of awkward accidents or perhaps the traces of regrettable choices you’d rather let slip from memory. For the Sandhills Woodcarvers, however, each scar is a testament to persisting through the beginner stage of the woodcarving craft, a skill rife with small nicks to the hands. Most of the cuts aren’t deep and fade faster than the playful stories attached to them, the price tags of fellowship.

The group meets every Monday afternoon, from 1 p.m. to 3 p.m., in the Senior Enrichment Center off U.S. 15-501. The member list comprises both longtime carvers and newbies who took to the hobby as a form of relaxation and social stimulation. Around 12 to 15 people arrive each week, deftly sculpting trees, hiking sticks, life-size birds, tiny detailed houses, and a variety of other knick-knacks. 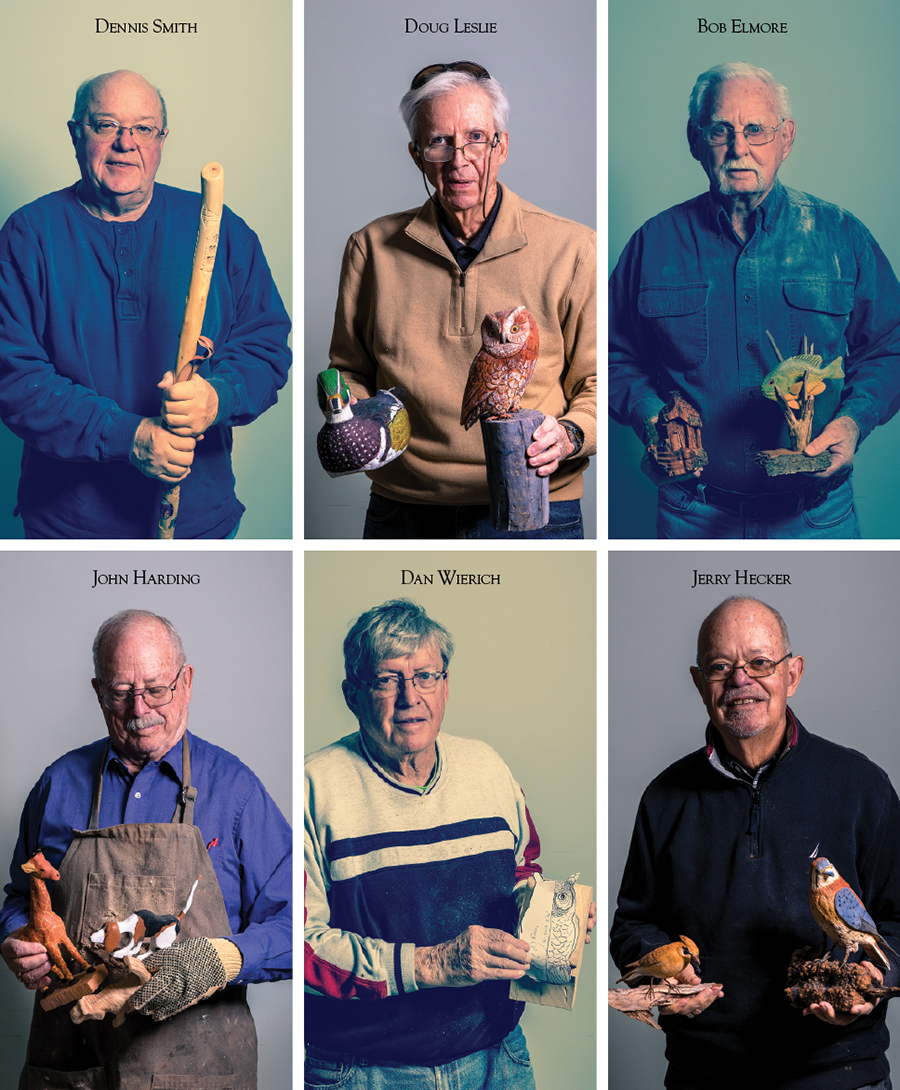 Abundant gift giving is a conspicuous commandment of the woodcarving craft, a product of having any number of finished tokens lying around the house with no other use. John Harding picked up the gouge and chisel after he lost his favorite game, tennis. “I hurt my shoulder, and I couldn’t play anymore,” Harding says. “So I found this woodcarving group about eight years ago.” Every spare Monday he carves highly personalized gifts for friends and family, completing over 300 comfort crosses with smoothed edges made to fit peacefully in an enclosed palm.

“It’s so satisfying, about my crosses. I get calls saying, ‘My wife passed away and she was holding your cross.’ It makes me feel that I did some good,” Harding says.

Another memorable carving Harding worked on was for his son-in-law, a second generation Russian-American. He crafted a typewriter spelling out ‘Merry Christmas’ in Russian. For the wedding anniversary of his son-in-law’s parents, he carved a dancing Russian bear. It was the hit of the event, celebrated in St. Petersburg. But the comfort crosses are what make his Mondays fulfilling. 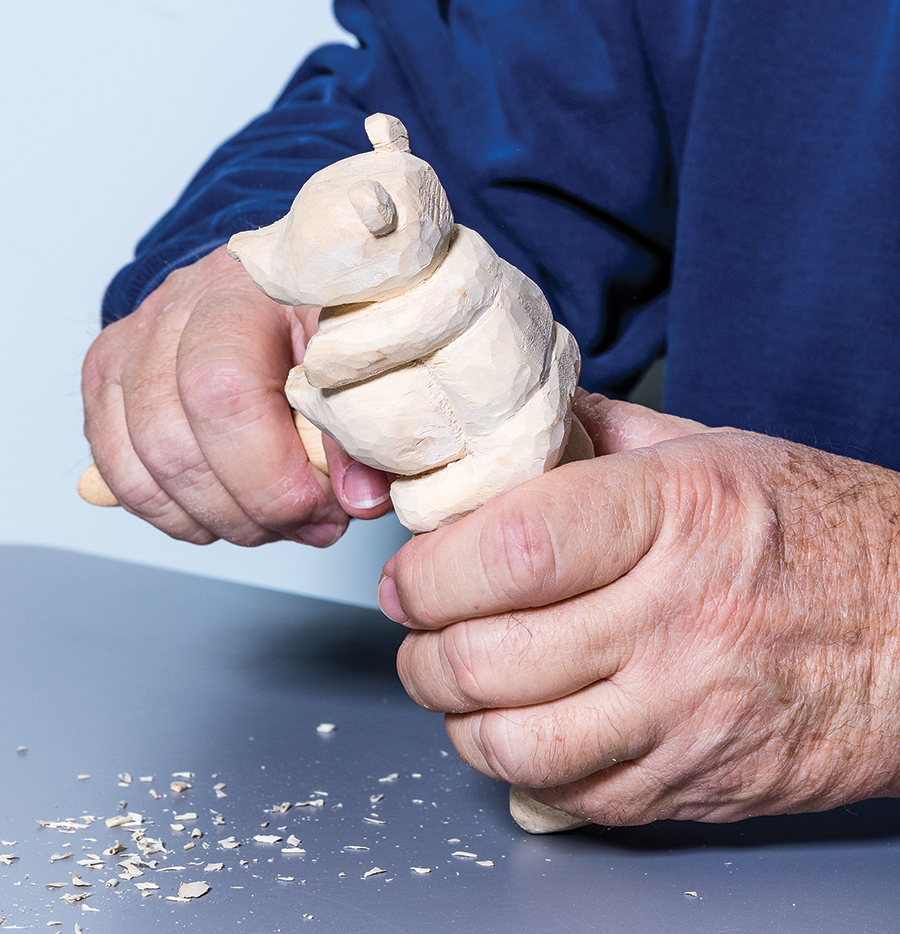 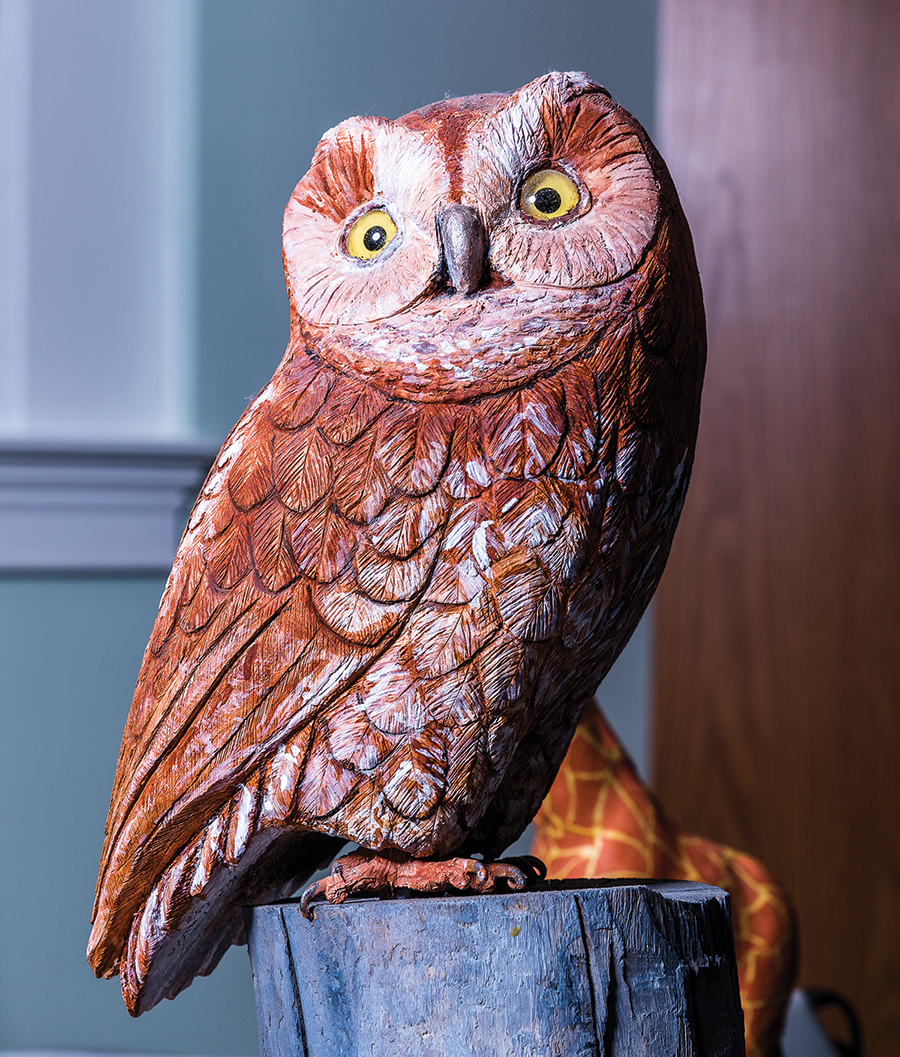 “When you’re finished you can’t wait to give it away,” he says. “You get tired of looking at it.”

Lonnie and his sister Gretchen are oddities in a room otherwise filled with retirees. About six years ago they were introduced to the group by their older brother, who had been encouraged to join by one of the original founders, Don McCluskey. They started at ages 8 and 9, and haven’t stopped since. Although no longer a beginner, Lonnie remembers the novice experience and has a nickel-sized scar decorating his thumb to commemorate the days of yore. The siblings laugh at the memory. 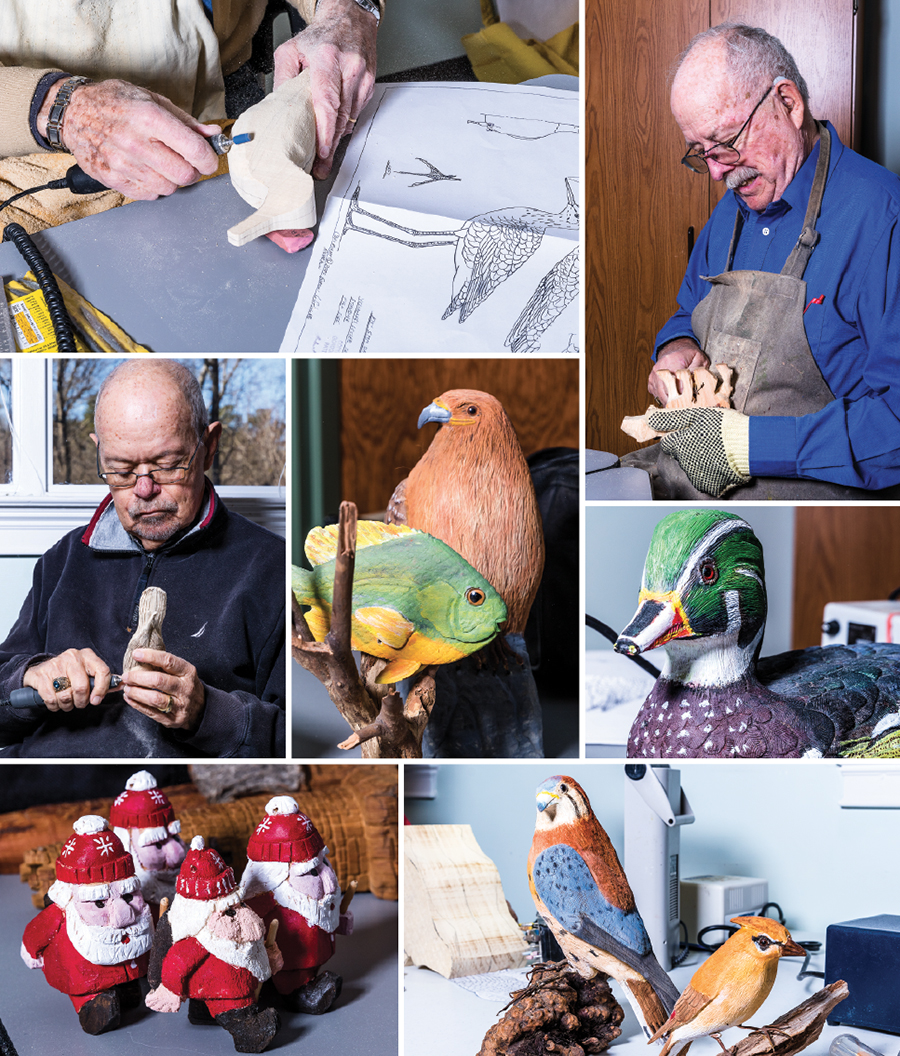 “He was using a dull carver, which will hurt you more than a sharp one,” explains Gretchen. “It slipped and took a chunk out of his hand. He said he had something to show me, and it was just his hand bleeding everywhere.”

Sibling moments, even the gory ones, aren’t the only chances for bonding in the carving club. The retired members of the Sandhills Woodcarvers discovered a sense of kinship when they picked up their carving tools.

“One of the best parts is the camaraderie and picking things up from other people,” says Hal Williams.

The skill set travels, extending well beyond a room in the Senior Enrichment Center. During summer travels to National Parks from Yosemite to Yellowstone, Dennis Smith would often find himself sitting at a picnic table, carving away on the hiking sticks he adorns with the park medallions. Without fail, curious people would start up conversations wondering what, exactly, he was working on. 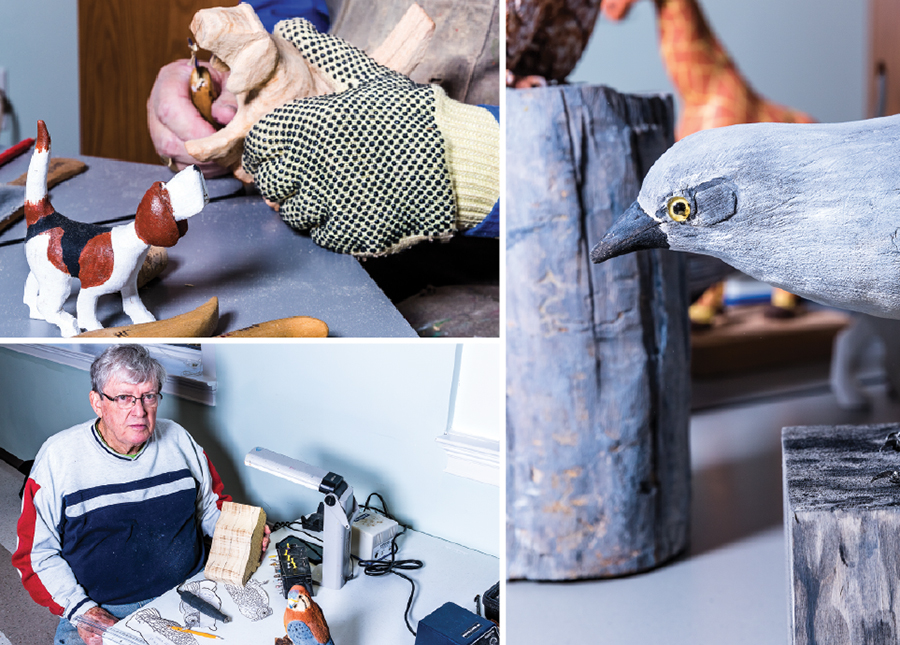 “It generates a lot of interest. A lot of people know someone who carves,” he says.

The Woodcarvers are eager to teach new members the basics, no matter how long it may take or how many cuts are accrued in the process. They don’t want to hoard all that companionship. They prefer to give it away.

Haley Ray is a Pinehurst native and University of North Carolina-Chapel Hill graduate, who recently returned from the deserts of Southern California.