A French feel in the Sandhills 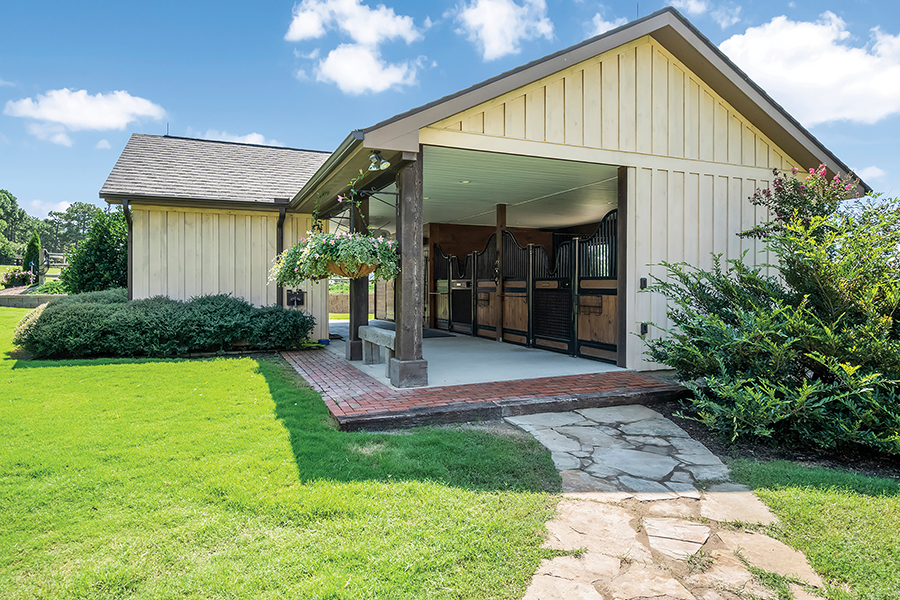 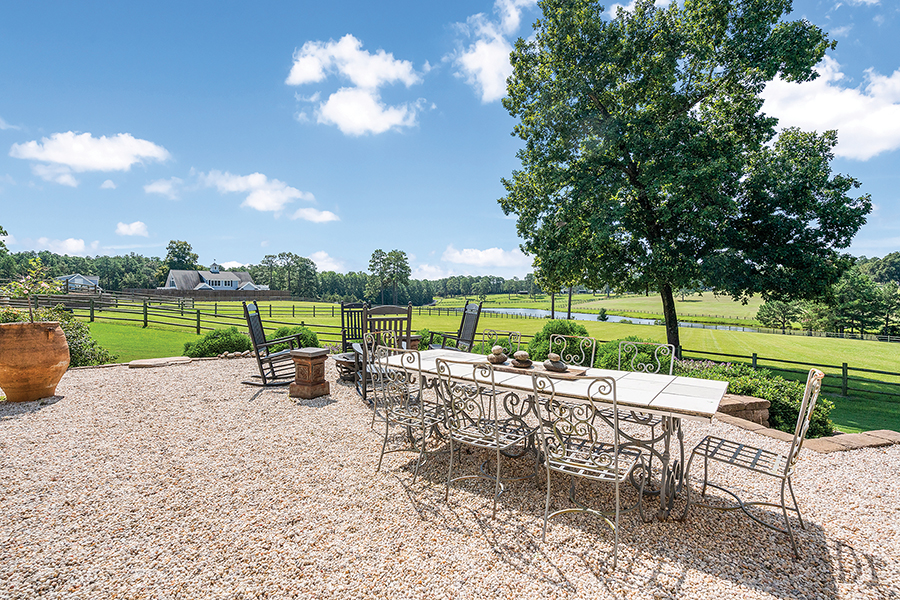 Credit James Boyd, and mild winters, for enticing foxhunters to Moore County. Eventually, some branched out to eventing, dressage, jumping. The Walthour-Moss Foundation furthered the equestrian cause. Soon horse people from Northeastern cities began wintering their steeds in Southern Pines, accessible by rail and so much closer than Florida. They built small apartments — “hunt boxes” — over the barns, graduating to year-round estates.

This tight-knit community created and maintained an active social life. Their houses, located between Connecticut Avenue and Youngs Road, grew bigger, better equipped and less rustic. Positioned near the top of this heap is the retirement home of Chris and Sallie Lowe, 5,000-plus square feet styled à la French chateau, on 10 grassy acres sloping to a pond.

In the barn (with tack room), two stall doors are topped with wrought metal. A full-sized dressage arena borders split-rail pasture fences while a row of tall, thick elaeagnus bushes separates the chateau from a narrow private road.

Sallie rides the horse, Chris rides the tractor, which has its own garage. Both are Virginians by way of Vermont.

How this happened could be a story written by Boyd himself, or maybe his buddy Thomas Wolfe. 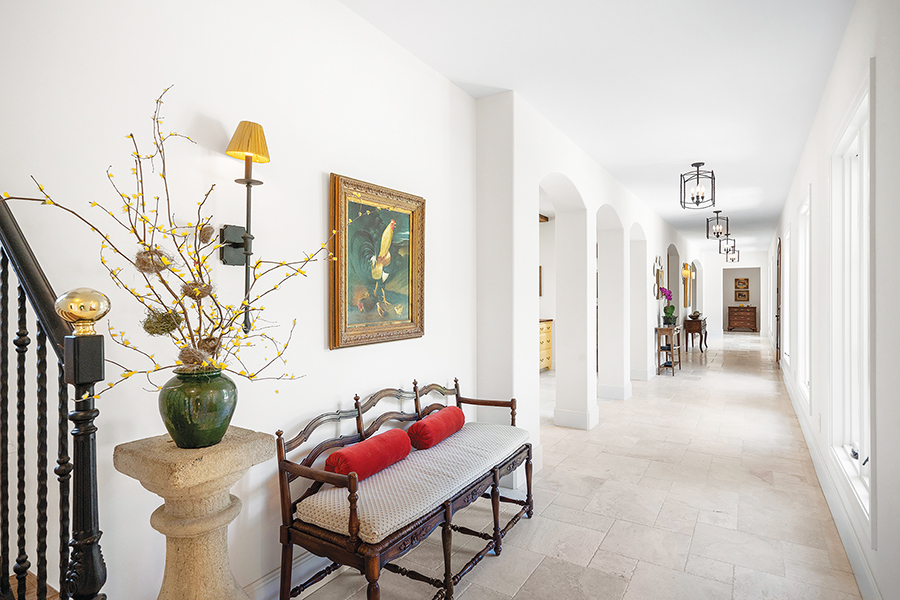 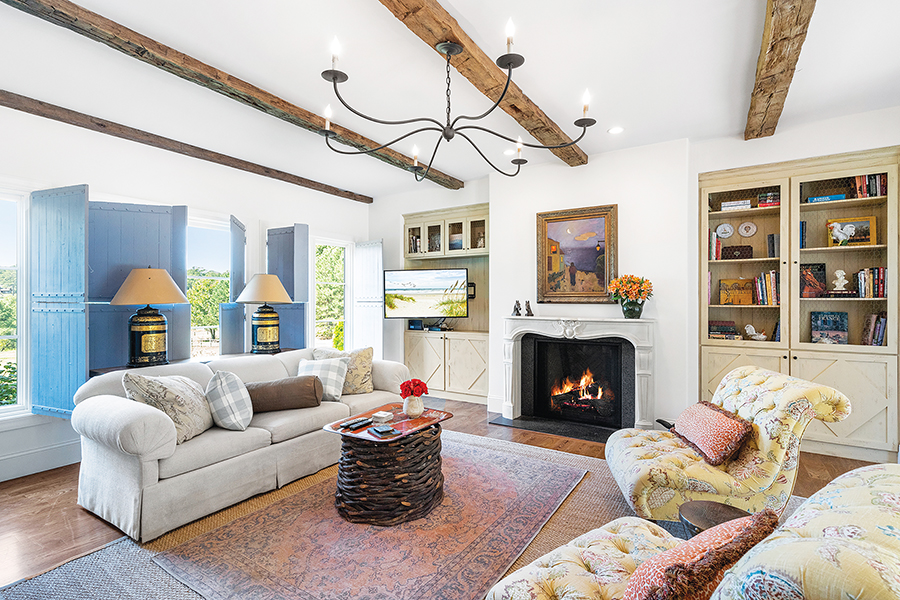 Most equestriennes start young. Not Sallie. Her parents, suspicious of the lifestyle, guided her into high school sports, where at 6 feet tall and athletic, she excelled. In 2011, now married, a mother and teacher living in Vermont but hating the cold winters, she won a trip to Southern Pines at a fundraiser. “This is it,” she decided, after driving around. “This is where I want to spend the rest of our lives.”

No problem for Chris, who dubbed her adult riding quest “keeping Sallie sane.” In 2011 they bought a property close to town but with “a country feel,” and rented a place during construction . . . of what?

A year spent in France left its mark on Sallie. She looked for an architect who would interpret her ideas rather than imposing current trends. Research led her to Designing Your Perfect House and other titles by William Hirsch. Perfect! Imagine Sallie’s surprise, discovering that the internationally lauded architect and author lives in Seven Lakes. Chris, whose father was a contractor, worked happily alongside builder Mark Lally’s crew.

Sallie presented Hirsch with some unusual requests. She had learned that authentic provincial chateaux are not grand at all, but rather informal country homes, sometimes with animals occupying the lower floor. “I’m not a fan of big open spaces,” she says. As a result, the main floor, although enormous, is a succession of moderately sized rooms — workroom, kitchen, sunroom, dining room with unusually small round table and large lazy Susan, living room, all with arches opening onto a 90-foot loggia (front hallway) with white travertine floor blocks arranged randomly. 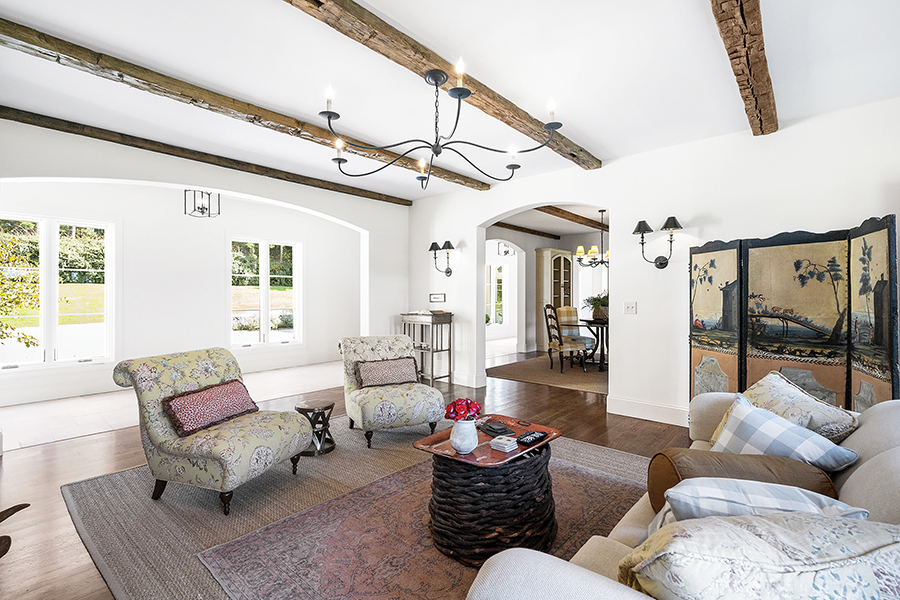 At one end of the loggia, a triple garage; at the other, the master suite. Windows everywhere, allowing unobstructed pasture vistas to become part of the decor. Quimper pottery, made in Brittany for 300 years, hangs from the walls. Paintings depict Parisian scenes. A massive antique French armoire approaching the 9-foot ceiling dominates the master bedroom. Laundry equipment is part of his-and-hers dressing rooms.

“The mother in me needed a room for each son,” Sallie admits. They have three — two are married, one with a grandson — all accommodated upstairs, which includes a guest apartment with sitting room, bedroom, kitchenette and one of five bathrooms which are bright and attractive but hardly spas.

A French chateau doesn’t do spas.

The French experience also influenced Sallie’s palette, with yellow coming out the winner — not lemon or daffodil but a muted hue, perhaps butter diluted with crème fraîche, or a silky béchamel. This hue covers exterior walls with contrasting purplish-blue shutters and, surprisingly, the footed kitchen cabinets. 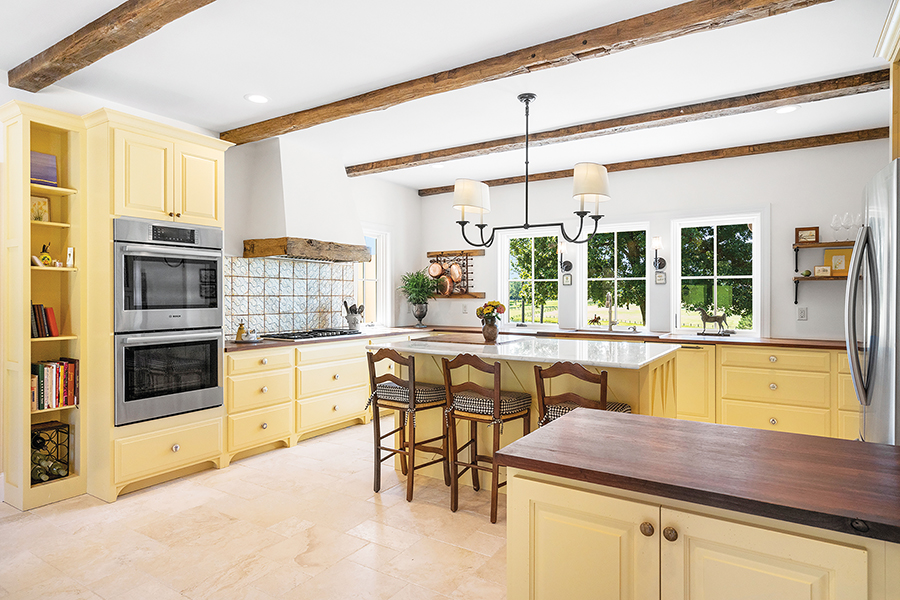 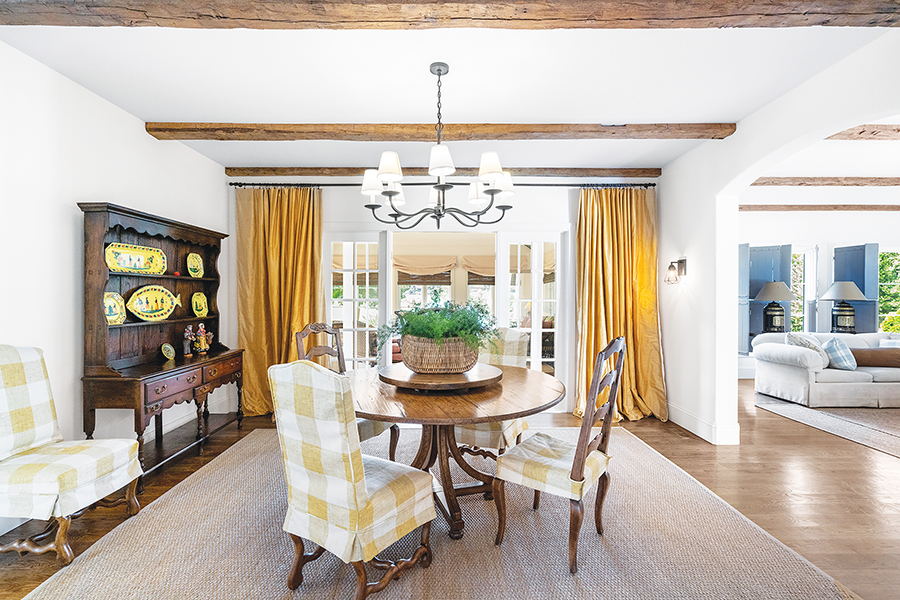 Ah, the kitchen, showplace of the American luxury home. Sallie wasn’t interested in sterile white or professional-grade appliances; more important to her, a backsplash composed of weathered, hand-painted tiles in colors and motifs that continue the European country chic feel. Chris points proudly to the top of a Vermont sugar maple chopping-block table inserted into the island. “It’s from my parents’ home. When I was young I would sit on it and talk to them.”

Furnishings combine antiques with spotlight pieces. In the living room, a coffee table contrived from twisted vines is topped by a toile tray, and a pair of oversized, heavily tufted slipper chairs face two Asian lamps made from tea canisters. In the sunroom the drawer of a game table, from Sallie’s lineage, holds a Washington Post front page dated 1882.

“We’re not super-formal,” Sallie concludes, “but we give plenty of dinner parties with china and crystal. I wasn’t ready to give that up.” 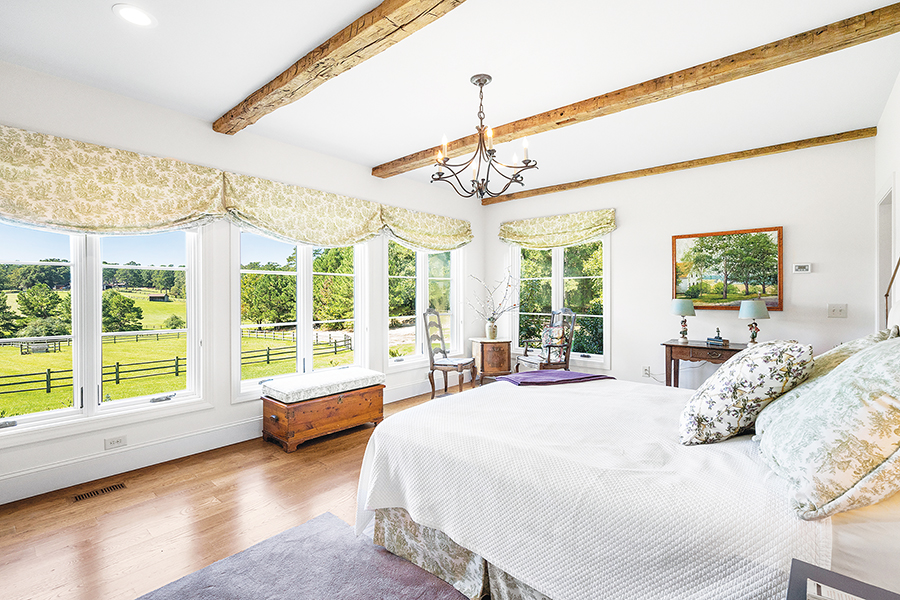 Not your ordinary horse farm, even in an area known for elaborate installations. “I knew what I wanted and I held my ground,” Sallie says. Meaning custom-designed and custom-built, right down to the baseboards. Geothermal heating and cooling. A courtyard covered with pebbles, not grass. Splintery decorative ceiling beams from the Amish. A sweet rescue pup named Gracie. Outbuildings — one containing Chris’ man cave — that complement, but don’t detract from the main house which, sadly, Sallie and Chris never got around to naming.

How about Pièce de Résistance?  PS