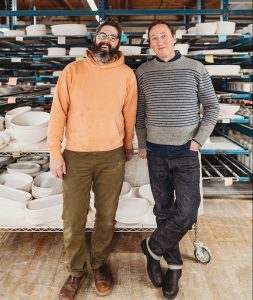 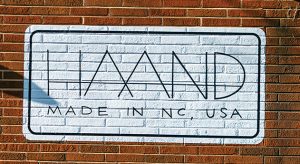 If my best friends from high school and I were able to live our youthful artistic dreams we’d still be playing in a garage band called The Subterraneans. Luckily, ceramicists Mark Warren and Chris Pence, who met in high school in the late 90s in northern Florida, had a business plan. In 2012 they founded a ceramics and glassware company called Haand, which is named after the archaic Norwegian word for “hand,” and where everything is made by, you guessed it, hand. Since founding their company, Mark and Chris have partnered with restaurants around the world, including Beard Award winners and local culinary royalty like Ashley Christensen and Vivian Howard, with whom they’ve launched a special collection.

There’s an old saying that goes, “If you show me your friends I can show you your future.” If only we all had friends like Mark and Chris during high school. The best businesses, like the best friendships, grow organically from shared interest and vision, and while Mark’s and Chris’ professional paths briefly diverged after college — Mark pursued the arts while Chris worked as an accountant — they came back together over a decade later in rural North Carolina as roommates and business partners in a crumbling old mansion. (How crumbling? Let’s just say that the same bucket that caught water from the kitchen drain was used to flush the toilet.) In this auspicious setting, Haand was born.

On a warm fall morning in late November, I parked in the grassy lot outside the Haand showroom and production studio in Burlington. The 13,000-square-foot brick building was once a hosiery mill, and it still retains its industrial feel, despite the gorgeous colors and earthy appearance of the countless handmade ceramic pieces that greet you as soon as you step inside. 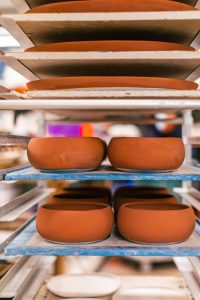 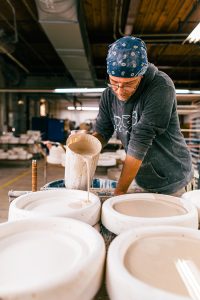 I found Mark, Haand’s creative director and co-founder, as he passed through the showroom on his way out the door. He stopped and greeted me warmly with a broad smile that was nearly hidden by a thick beard. Mark very much looks the part of a potter, and he very much looks the part of someone who might enjoy living in a house where a single bucket serves as both a kitchen and a bathroom appliance. I hadn’t let anyone at Haand know I was coming, and I felt bad about dropping in during the middle of the day, but Mark didn’t seem to mind. He casually showed me around the production studio where a couple of dozen people were at work at various stations, each one marking an integral step in the process of achieving the distinct look and feel that Haand is known for.

As we walk through the space, Mark explains the process, beginning after he completes each design, whether it be for a vase, a coffee cup or a serving dish. A mold is built from each design, and into the mold is poured liquid porcelain slip. Once the piece dries inside the mold, it is removed, cleaned, smoothed with a sponge, and hand-inspected before being stamped with Haand’s logo and the phrase “Made in NC, USA.” The piece is then bisque fired and heated to 1,800 degrees, and this is where each piece gets interesting and distinct.

“Our clay body itself is what’s called vitreous,” Mark says, “so it melts at a really high temperature, and then it will become kind of liquid during a period of the firing. The clay kind of remembers things that have happened to it. So if you bump it with your thumb or kind of move it, it might look strange going in, and then it comes out and it has melted and softened and completely shifted its form. You can’t really fight that unless you’re doing what they do in industrial kilns, which is not what we do here. There’s a deeper truthfulness that can come out of not trying to fight the process and just letting it be what it is. It’s a beautiful thing.” 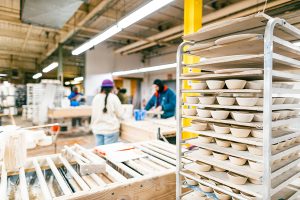 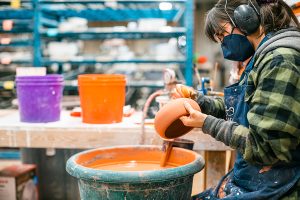 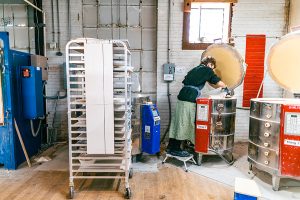 There is no doubt that each piece made by the folks at Haand is beautiful not only in its design, but also in its color. After the pieces are fired they are glazed with a liquid coating of minerals that bonds to the clay, and brings a glassy and distinct color finish and texture to each piece, whether it be fern green or matte grey or one of the stunning Cloudware finishes that looks just like its namesake.

After the glazing, each piece goes into the gas kiln, where it’s fired at 2,300 degrees so that the clay and the glaze thoroughly bond. Afterward, each piece is polished and inspected before either being shipped out or stocked in the showroom.

All told, countless hands touch the pieces during the process, and every step reflects the hand of the maker who’s worked on it, which ensures that each piece, even if it’s part of a set, bears its own distinctions. Roughly 90 percent of Haand’s employees were novices before walking in the door, but each of them receives extensive training in the production process in order to maintain Mark’s vision for every individual piece.

“It’s exciting,” Mark says, still seeming struck by the beauty of the process of designing, forming and firing even after all these years. “It’s right on the edge of chaos.” 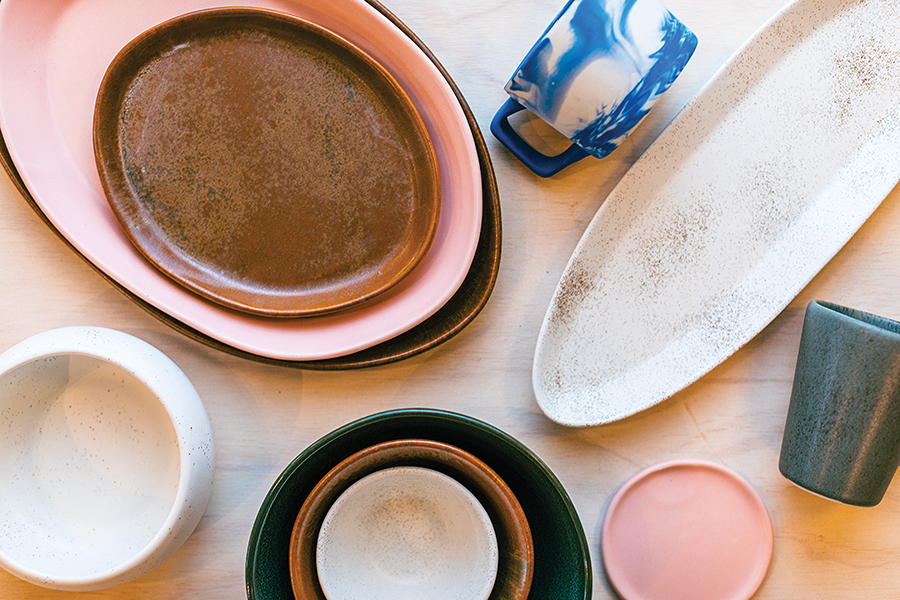 But to the layperson’s eye, nothing about the scene at the production studio seems chaotic. People of all ethnicities, ages and backgrounds work quietly, whether they’re sponging or firing, many of them with earbuds popped in so they can listen to music, audiobooks or podcasts. Their work is accompanied by glances, smiles, nods of the head. The whole scene feels peaceful, thoughtful and grounded.

But it didn’t always feel that way to Chris, company president and co-founder, who I found after he stepped out of the office and gave me a tour around the showroom, where I immediately picked out two 10-ounce tapered mugs to take home. Chris had worked with clay since high school before forging a career as a corporate tax accountant in Jacksonville, Florida, where he often worked 80-hour weeks. It was on a trip to visit Mark in the dilapidated farmhouse that Chris truly considered reconnecting with his early passion for pottery. Mark pitched the idea of the two of them starting a business together; it ended up being an easy decision for Chris. 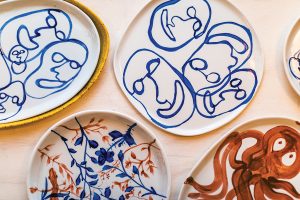 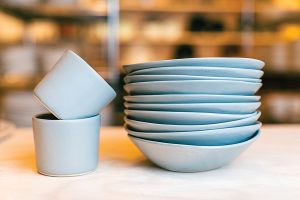 But those early days, rooming at the farmhouse with Mark while working in an outdoor studio took their toll on Chris, who quickly realized the differences between plowing through a 16-hour day behind a desk and the physicality of clearing brush to create more outdoor space, moving boxes of finished pieces, making phone calls and filling purchase orders.

“Moving into that house in the woods was a totally transformative experience for me,” Chris says. “I imagine that people were having thoughts like, ‘Has Chris lost it a little bit? Is he going a little crazy? He left a job he worked so hard for.’ I really looked up to Mark and relied on him to kind of show me what this new life was like.

“But I definitely remember being in the studio by myself one day and the lights were off, and it was dark. I had a real big moment of existential dread, and I thought, have I made a terrible mistake?”

For Chris, after both the success of the company and his continued friendship with Mark, those moments of uncertainty are fewer and farther between. “I’m so passionate about what we’re making,” he says.

While Mark and Chris’ primitive way of living has changed since their days on the farm, the way they make their pottery has not.

“We haven’t changed the production method at all,” Chris says. “We’ve certainly refined it and gotten better at doing things, but if you were to have been there with us at the farmhouse and walked through how we made a pot, and then you were to walk through the way we do it now, you would see there are no fundamental changes. We can make things more efficiently, but it’s still a handmade mold, we pour the clay in, we pour the clay out, we finish it, we fire it, we glaze it, fire it again, and it’s done. The process is the same.” 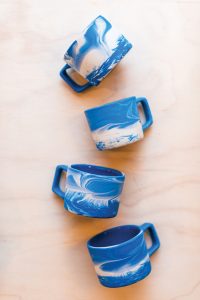 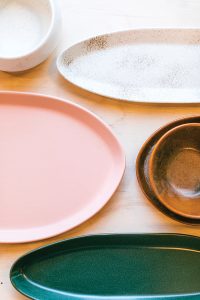 Their friendship is the same too.

“Mark has just always been an incredibly fun person to be friends with,” Chris says. “I think it’s a blessing for both of us to have been such good friends before the business because having a business is hard, and it can really, really be difficult on every level, whether it’s financially, physically, emotionally or spiritually. Mark has always had my back, always been there for me, and always supported me.”

It’s clear that Mark has felt the same about Chris for years. “When you meet someone like Chris, you just kind of know them in totality. Chris is one of those people that if you know him it would be inconceivable not to want to be friends with him afterward.”

“And Mark was hilarious in high school,” Chris says, laughing. “I remember him showing up to a prom party at my house. He was a sophomore, so he wasn’t even invited to the prom.”

“Please tell me he showed up in a tuxedo,” I said.

“I think it was one of those T-shirts that has a tuxedo printed on it,” Chris says.

“It was,” Mark adds, the sudden recollection causing them both to break into laughter. “And I brought a beer bong that I’d bought on a German Club trip to Daytona Beach. It had never been used before, and I was like, ‘Let’s see how this works.’”

“That’ll be the next thing that Haand manufactures,” I say. “Ceramic beer bongs.”

“There’s a lot of demand for that,” Chris adds, and we all laugh again.

When you visit Haand or order any of their pieces online to be delivered to you, you will immediately recognize the care and attention that Mark and Chris have put into their craft. And when you spend any amount of time around Haand’s co-founders, you will say the same for their friendship.

Come for the kiln-fired pottery. Stay for the warmth.  PS