The art of smørrebrød

Story and Photograph by Rose Shewey 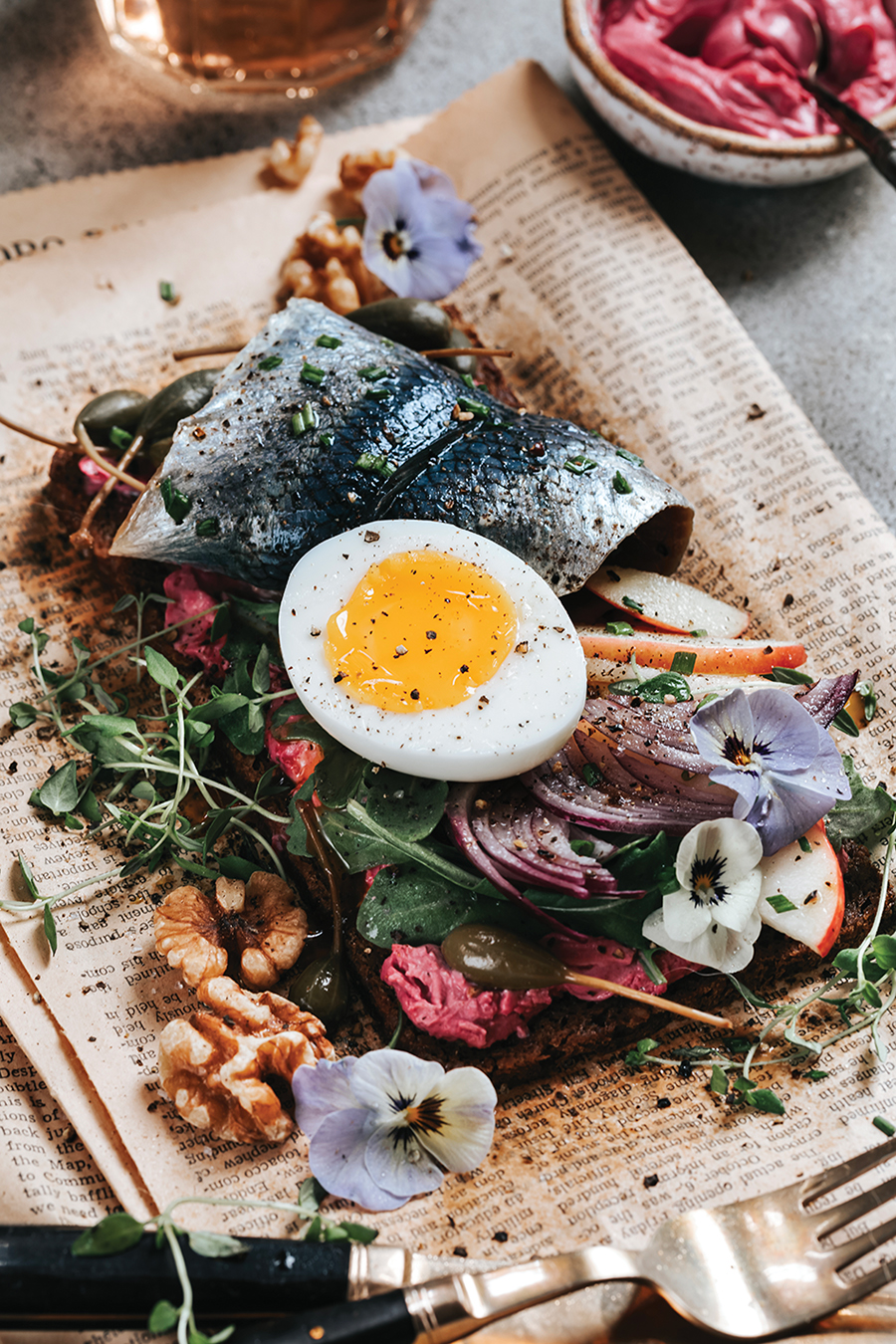 From St. Moritz to Sugar Mountain, after-ski traditions are as varied as the topography of the mountains themselves. You might find yourself in a tavern with sticky floors, communal tables and craft brews on tap, or you might lounge on a secluded sun deck draped in a wool blanket, overlooking picturesque hillsides. Whatever your situation, one thing is for sure: After a day’s vigorous outdoor activity in the frosty cold, you will be in the market for some serious chow. Move over, moringa smoothies and açaí bowls, this is a job for pickled herring, Alpine fries, potato rösti, cheese fondue and goulash soup.

Or, for the culinary adventurous and fellow Scandiphiles, wander off the beaten path and explore the rich and colorful world of smørrebrød. The possibilities are endless, but let’s start with the basics: Take a slice of freshly baked rye bread, spread butter on it and layer with smoked, pickled or fresh meat or fish, then balance out flavors and textures with spreads, cheese, herbs, veggies or fruit.

Smørrebrød literally translates from Danish to “butter bread.” It is always open-faced and iconic in all of Scandinavia and many parts of Europe, and for good reason. While other European countries have similar traditions (Germans love their “Brotzeit”), there is something rather intriguing about the Danish version of it.

There are some rules to observe (or deliberately ignore), but hands-down, the most important one is: Smørrebrød needs to be appealing to the eye, even sexy. It’s an art form and, at its best, it draws you in with appetizing compositions of fresh (or freshly preserved) ingredients, a mixture of colors and carefully curated garnishes. In Denmark, entire restaurants have dedicated themselves to creating the most enticing open-faced sandwiches with artisan ingredients. For an authentic experience, eat with a fork and a knife and never, under the penalty of public ridicule, fold your smørrebrød to eat as a sandwich.

Bizarre, but true: In Denmark, you can become a “smørrebrødsjomfru” — literally, a “butter bread maiden,” which is a recognized three-year apprenticeship and qualifies you to work in respected restaurants as a smørrebrød chef. While this culinary heritage became less popular sometime during the second half of the 20th century, it is now experiencing a renaissance, and not just in Denmark. More often these days, you will find smørrebrød on the menu of après-ski locations around Europe as a nourishing, wholesome meal option. While this delicacy is a year-round offering, it has special appeal during the winter months, particularly to those who like to eat in-season as it is an excellent reason to raid your root cellar for all things smoked and pickled.

1-2 tablespoons prepared horseradish, or to taste

Chives or sprouts for garnish

Combine red beets, sour cream and horseradish in a food processor and blend until you have a smooth cream. Spread a generous layer of red beet cream on the slices of bread, add leafy greens, rollmops, eggs, apple slices, capers and onions and arrange to your liking. Sprinkle with chives and serve right away.   PS

German native Rose Shewey is a food stylist and food photographer. To see more of her work visit her website, suessholz.com.